December 7 2016
26
It seems that some experts in the United States are ready to help Russia finally integrate into the world economy. Under President Trump, the Russians will make friends with the Americans irrevocably and together will overcome evil. 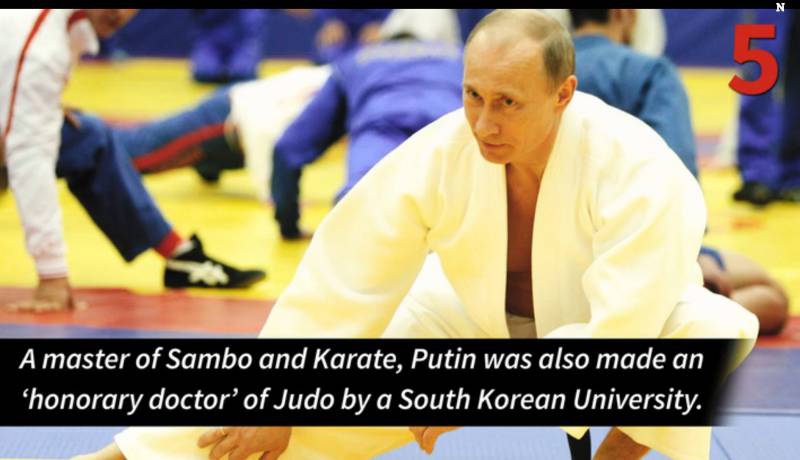 Sambo master and karate. So they see Putin in the magazine Newsweek

Two assistants from the transition team of President-elect Donald Trump told a British newspaper correspondent "Daily Mail"that D. Rohrabacher really added to the list of candidates "against the background of strife in the new administration." The “feuds” are about who should still sit in the chair of the main diplomat of the United States. Today, the American edition of the Washington Examiner already claims that Mr. Rohrabacher’s candidacy is at the top of the list. Next to the Bolton name. These two represents a kind of “consensus package.”

Rohrabacher also told Fox & Friends that he shares Mr. Trump's views on the "Chinese challenge" and "detente with Russia." The latter should be collaborated with in order to "defeat radical Islam."

At the same time, the candidate for state secretaries criticized his opponents, noting that “some” of the “colleagues” want to “return to the Cold War” - there is so much “hostility” in them.

The United States once measured strength with the Soviet Union in the Cold War, Rohrabacher recalled. But Russia is not at all. Russians are “good people,” the Republican said, and Americans can “work with them to defeat the evil that threatens the planet right now.”

Mr. Rohrabacher openly advocates a military alliance with Russia to fight terrorists in the Middle East, and for policies that would fundamentally change the balance of power between Washington and its strategic rival. The candidate for state secretaries agrees that the United States must "establish positive relations" with the Putin government "for victory over radical Islam."

At the same time, Rohrabacher approves of Trump’s harsh rhetoric addressed to China.

Rohrabacher's modesty is hardly any different. Therefore, he explicitly stated in the telecast that he is the best candidate for the post of head of the State Department.

However, Trump's transition team consultants, including Blackwater founder Eric Prins (by the way, Rorabacher mentioned his internship more than a quarter of a century ago), created a rather long list of state secretaries: here both General David Petraeus and Rudy Giuliani, and Mitt Romney, and Senator Bob Corker, and, finally, the former Ambassador Bolton.

But Rohrabacher is sure that he could work on the new post better than anyone.

We also note that Dana Rohrabacher, who supported Trump during the general election, previously criticized him, horrified by his insulting rhetoric (however, he was not the only one to be horrified, many Republicans were outraged by Trump's speeches). Apparently, after the victory of Trump, the mood of the critic has given way to the aspiration of an ordinary opportunist: what can not be said in order to sit in a high chair and grab a piece of power!

We also add that Dana Rohrabacher earlier urged not to "demonize" the Russian president. There was even a rumor in the “world community” that Putin was paying Mr. Rohrabacher a “salary”.

At the time, Dana Rohrabacher tested herself in arm-wrestling with Vladimir Putin. It was in the 1990-s., Putin visited Washington as part of a delegation from the Russian Federation. There was an American football match, and then Rohrabacher and Putin talked at a local bar. There was a friendly match in arm wrestling. By the way, Putin, according to Rohrabacher's recollections, instantly overcame him. The vanquished Putin recognized "strong and wiry" and praised his muscles. Many years have passed since the incident in the bar, but Rohrabacher still has “friendly male sympathy” for the “strongman” Putin.

In short, American conspiracy therapists can indulge in various theories about the future agent of Putin in the State Department.

Russian President Vladimir Putin stated in the new foreign policy document that the chances of a nuclear war or large-scale conflict in the world are low. Claiming this, Sharkov relies on a document made public in Russia on the website of the Ministry of Foreign Affairs.

It turns out that the Concept of Russian Foreign Policy, representing the official doctrine of the Kremlin’s foreign policy, was amended.

The document was last updated in the 2013 year, before the outbreak of the conflict in Ukraine.

The text has been updated to reflect the two conflicts in which Russia is somehow involved: in Ukraine and in Syria.

The text notes that the value of the factor of "power" in the development of global relations has grown. And yet, despite repeated reminders from Russian officials, including Putin himself, that Russia's nuclear power should not be taken lightly, the new Kremlin doctrine notes the “low level” of the danger of a large-scale war between leading powers including nuclear war.

According to the document, risks are much higher when it comes to international participation "in regional conflicts and the escalation of crises."

As for who, as they say, “started first”, Moscow accuses the United States and its allies of trying to “contain Russia and apply political, economic, informational and other levers of pressure that undermine regional and global stability.” Moscow also stressed its disagreement with the expansion of NATO, which violates the "principle of equal and indivisible security."

Obviously, we add, the update of the foreign policy doctrine happened very timely: the president is changing in the US, and experts suggest that Washington and Moscow will soon converge on a number of key issues, including in the field of combating world terrorism.

The third newswhich is widely discussed in the United States and the world community, is the possible integration of Russia into the global economy. Highbrow uncles even talk about this topic at a specially convened symposium.

The Journal "National Interest" An article by Andrew Spindler was published, which is part of a symposium material organized by the National Interest and Carnegie Corporation of New York. The current symposium is an event where leading world experts predict the future of relations between the United States and the Russian Federation under President Trump.

President-elect Trump, the article indicates, has an “unusual opportunity”: in the coming months, he can improve US-Russian relations. At present, this relationship is as cold as ever. Their temperature is at the lowest point, if we take for comparison the periods of the greatest confrontation between the two powers during Soviet times.

Today, Trump has some opportunities to create a positive agenda in the short term. And they should be used, notes Spindler. For example, the future administration could pay attention to the potential for US-Russian cooperation in the Middle East, especially with regard to the defeat of the "IG" (prohibited in Russia) and the development of a peace plan for Syria. There are quite a few other fronts where cooperation between the US and Russia could be productive, and this “should not be overlooked.”

One of the main areas for expanding cooperation will probably be the economic sphere. The West, led by the United States, has invested heavily in the development of a market economy and financial sector in Russia during the 1990 and the beginning of the 2000, the author recalls. “These efforts have helped to significantly integrate Russia into the world economy and financial system,” he writes. As a result, an increase in trade and financial flows helped strengthen Russia's ties with Western Europe and the United States. However, after the "Russian seizure of the Crimea" Western sanctions were launched against Moscow. These sanctions showed Russia’s dependence on the global economy.

According to the expert, the renewed economic cooperation with Russia will only lead to an increase in the influence of the West. We must not beat sanctions, and integrate. There is no point in sanctions: did they change the Kremlin’s policy? But economic interaction will give the West "more influence in Russia with the help of various soft levers." At the same time, Russia's economy will improve, which will contribute to the creation of a middle class in the country, now "fragile."

The coming coming to power of the new US president, believes Spindler, and the possibility of resuming economic interaction with Russia should not be viewed as an approval of the actions of the Kremlin towards Ukraine and Syria. Most likely, economic rapprochement would be a “pragmatic step for improving the well-being of ordinary Russians” and for strengthening the global relations of the West and Russia.

It seems that with Trump's election in the US foreign policy major changes are expected. If the other day strategists from the Pentagon declared their readiness to reformat their defense strategy, as Mr. Trump wishes, ready to move closer to Russia in the fight against IG, today we are talking about appointing Mr. Rohrabacher’s “friend of Putin” to the post of state secretary. In the meantime, former supporters of the sanctions, having convinced of their zero political effect, are ready to change the US foreign policy, orienting it to cooperation with Moscow, and not to the notorious “isolation”. And for good reason in this context the renewal of the Kremlin’s foreign policy doctrine is mentioned: neither Moscow nor Washington wants a nuclear war.

We can predict one thing with confidence: neither the Putin nor the Trump Nobel Peace Prize shines. After all, it is given for the war.