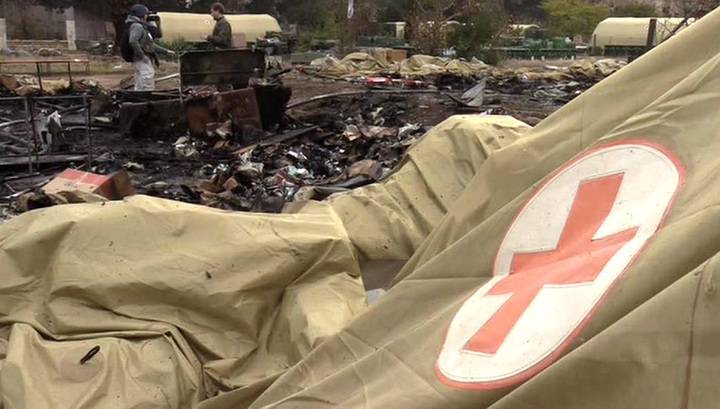 “What is strength, brother?” And strength, as we know, is in truth. Our truth in Syria is the main advantage. Russian troops are one of those forces fighting there in full compliance with international law.being at the invitation of the ATS leadership. For the Western "coalition" led by the United States there is no such truth. She does not have the right to be there.

And the truth of Russia is that our country really helps Syrian citizens, and does not poison their lives, and so distorted by many years of war.

If its stolen wealth flowed from the Syrian-Turkish border from Syria, it went and continues to go from Russia to the UAR Humanitarian aid - food, medicine, clothes ... If a radical Islamist rabble from all over the world penetrated into Syria through the Turkish-Syrian frontier, then Russia sends to an exhausted country sappersso that they would neutralize the numerous "hellish machines", set apart by the "oppositionists" murderers, who do not care if they were blown up by a mine - a soldier or a little girl. If the “oppositionists” even get poisoned substances through the Turkish-Syrian border, with which they fill the warheads of their home-made missiles, then Russia sends to Syria doctorsthat help people.

Moreover, before helping a person, our doctors and nurses do not ask: “Are you for Assad or for the opposition?” Probably among the residents of the liberated districts of Aleppo, whom the mobile hospital staff provided medical assistance, there are also those who were heavily propagandized militants and, to put it mildly, do not like Russia. But - I repeat - no one asked these residents about their beliefs. To help people, the Russians have deployed an outpatient, children's, surgical, therapeutic departments, resuscitation, laboratories, and an x-ray room.

On Monday, 5 December, the hospital began its noble work, and on the same day a tragedy occurred. This hospital was fired upon by the militants of the so-called “opposition”. As a result of hitting a mine in the emergency room, a medical officer was killed. Another nurse and pediatrician were injured. A few hours later, the wounded nurse passed away. Russia’s journalist from the Arabic editorial office of Russia Today, Somar Abudiab, and the people who were in the emergency room of the hospital were also injured. (The names of the murdered Russians are currently being clarified).

A spokesman for the Russian Ministry of Defense, Major General Igor Konashenkov, made an angry statement in connection with the monstrous incident. According to him, the blood of physicians lies with the customers. On those who "fostered, armed these animals in human form, calling them to justify his conscience and to the voters opposition". He blamed three specific countries: the United States, Britain and France, and also accused "other countries and education sympathetic to them».

The Major General demanded that the world community, organizations like the ICRC, "Doctors Without Borders", etc., strongly condemn the killing of those who performed their medical duties in Aleppo.

In response, US State Department spokesman Mark Toner struggled to squeeze out common words of regret. However, he could not even insert a “hairpin” on such a day: in his words, “The United States condemns any shelling of medical facilities, "both by the rebels and by the regime». For him, the terrorists are still the noble “rebels”, whatever they have done. And those who fight against terrorism are, of course, the “regime”.

In addition, Toner said: "I saw these messages, I can not confirm them ... This is difficult to do due to the limited sources of information". However, we all remember very well how categorically the United States blamed Russia for the bombing of hospitals and hospitals in Aleppo, even when the sources were more than doubtful. And these same “sources” were located not in Syria, but somewhere else outside its borders: in Britain, in Turkey, and finally, in Washington. From there it is more visible.

On the same tragic day, a meeting of the UN Security Council on Syria was held. Russia and China imposed a double veto on another draft of the western resolution on a "truce" in Aleppo. The same position was supported by friendly Venezuela. Angola abstained from voting.

Even before the meeting, Russia described the project as provocative. Russian Foreign Minister Sergei Lavrov said that if adopted, he will give the militants a new respite. However, he was put to the vote. Now Western countries “regret” that a frankly disastrous project failed, they blame Moscow and Beijing for all sins. It would be better if they with the same zeal accused those who killed the doctors. But where there!

China’s position is usually much more restrained than Russia’s. But this time, the Permanent Representative of the PRC in the Security Council, Liu Jie, expressed very sharp criticism of Britain, which was actively pushing the project. "I would like to ask the representative of the United Kingdom to put an end to the practice of poisoning the atmosphere in the Security Council and insulting a serious council meeting.“- said the Chinese diplomat.

As usual, the West has preoccupied with the fate of the terrorists at a time when the Syrian army is confidently continuing the operation to free Aleppo. In these conditions, a fake truce (which, as always, would be one-sided) would only be beneficial to the militants. That is, outright killers who do not hesitate to bombard the hospital with mortars and destroy people who have arrived to save others.

Thus, a double veto was imposed on a resolution that would assist those who bring death. And two Russian women in white coats gave up their lives, trying to veto directly on death itself, to wrest the peaceful inhabitants of Aleppo from its clutches, without asking whether these residents like Russia or not, without asking what their political beliefs are ...