December 5 2016
39
Vladimir Putin at the Valdai Club made one important statement, which somehow lost sight of our expert community: "Russia and Ukraine managed to dissolve, and then bleed." And Donbass, the entire South-East of Ukraine, was drenched in blood. But we will overcome it, the president added. 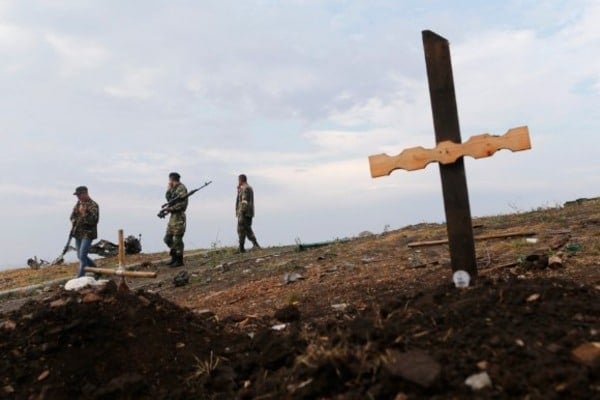 Behind the brackets are more important questions: who did it and how they will answer for it. We know, of course, the specific defendants of this case: Victoria Nuland with cookies, on which neo-fascist Bandera politicians and militants were nursed. And what is behind them? The foreign policy of neocon Washington.

Here we need to recall, of course, Zbigniew Brzezinski with his completely cannibalistic scenarios of turning Ukraine into a “new Afghanistan” in the center of Europe in order to weaken both Russia and Europe. He's the author and the Afghan script. However, this strategist always speaks ambiguously, and is hidden behind the backstage scenes of Washington. In the end, formally, Brzezinski is just some kind of adviser at a very old age, which Washington has a lot of - in this way, some of our experts leave the question of Brzezinski’s role in Washington’s strategy.

However, today there are statements by Washington officials, that they can be hemmed into the case of the responsibility of the United States, their European vassals, for the blood of Odessa, Mariupol, Donbass, and in general this Bandera nightmare.

Recently, the outgoing US Secretary of Defense Ashton Carter called on Ukraine to prepare for the worst: "The Union of the President-elect Donald Trump with the Russian authoritarian president." However, the most important thing he said further: “Farewell, promoting democracy in the world!” This is the moment of truth!

All that American diplomats did in Ukraine, including if necessary the resources of Ashton Carter and the militants of the Right Sector (banned in the Russian Federation), is the “promotion of democracy”, that is, the establishment of a colonial “democratic” regime in Ukraine. In other words, this is a banal expansion, covered with a fig leaf of democratic demagogy from the Nobel laureate Barack Obama, on the borders of Russia.

“Promoting democracy” is like Obama’s politically correct message, but Ashton Carter reveals its content to us and talks about himself as an instrument for promoting it, moreover, this instrument itself testifies about its role in fueling conflicts in the Middle East and Ukraine.

It can be assumed that the human factor that led to the supposedly erroneous attack on the Syrian troops in Dair al-Zor is also Ashton Carter, he seems always ready to make a mistake, for the sake of "promoting democracy."

James Klapper, the outgoing head of the national intelligence of the United States, also opened up his mind - for some reason, all the ex-heads begin to speak the truth! - that the “Ukrainian crisis” has no prospects for resolution, because Moscow is not going to leave the Donbass ”. This is how Obama Washington understands the implementation of the Minsk agreements!

On the other hand, these testimonies of officials of the power structures of the West say that Washington, and the West as a whole, are a party to the conflict in Ukraine, and then the OSCE in the Donbass is just their intelligence officer. While the West is considering the implementation of Minsk in this way, there are really no prospects for a peaceful resolution of the conflict. The situation is stalemate.

Even worse, along with Klepper, we see Nazi-Bandera Dmitro Yarosh, he also repeated the Klepper's idea the other day: “Minsk can’t be executed,” after he received the order from Poroshenko. And predicted the imminent resumption of even more serious hostilities in the South-East than before. That is, perhaps, not only in the Donbas?

Thus, evidence is obtained of how Ukraine was turned into Bandera. This is a direct consequence of the use by Washington of the doctrine of "promoting democracy" to the borders of Russia. Washington has always promoted it with the help of moderate bandits, starting in Afghanistan, Yugoslavia, and then in Libya, Syria. In Ukraine, he used Bandera, Nazi Democrats.

According to V. Nuland, the American “democracy” invested 5 billion dollars in “Ukrainian democracy”, that is, in the moderate Bandera opposition, and in Syria it just supplied weapon moderate Islamists.

By the way, this is an old American scheme, run-in in Latin America, where Washington repeatedly brought its “bitch sons” to power, called them “young democracy” and forgave everything, and then it turned out that it was a Pinochet neo-fascist junta, with democratic “squadrons” of death". He turned Ukraine into Latin America, only with the Nazi battalions ...

Aaron Banks, a British businessman and Brexit supporter, said after a meeting with Trump: "Trump and Putin will work together, because Trump intends to fight against radical Islamists."

Thus, Banks confirms that Obama and Ashton Carter did not fight radical terrorists, on the contrary, they helped them "promote democracy"! If Trump really fights with the terrorists, and hopes to rely on Russia for this, he will have to recognize the responsibility of Obama and Neocon's Washington for the Bandera coup in Kiev, and its grave consequences for Donbas and all of South-East Ukraine.

In other words, Moscow can present a Donbass bill to Trump for bringing the US State Department to power in Bandera in Ukraine, and make his payment a condition for cooperation. Obama to present this account was meaningless, but Trump is necessary. It seems that Trump understands this, in any case, he has repeatedly stated that he will reconsider the Crimean issue, and the Crimea will inevitably pull along both Bandera, and Nuland with cookies ...