December 3 in Russia celebrates the Day of the Unknown Soldier

December 3 2016
63
The Day of the Unknown Soldier is a relatively new memorable date in the Russian storiescelebrated annually - December 3. This memorable day is intended to perpetuate the memory, military prowess and immortal feat of the Soviet and Russian soldiers who died in hostilities and whose names remained unknown. For the first time, the Day of the Unknown Soldier in our country was celebrated in 2014 year. December 3 date was not chosen by chance. It was on this day 3 December 1966 of the year, in commemoration of the 25 anniversary of the defeat of the German fascist troops near Moscow, the remains of an unknown soldier from the mass grave of Soviet soldiers on the 41 kilometer of the Leningrad highway (at the entrance to the city of Zelenograd) were moved and buried solemnly near the wall of the Moscow Kremlin in the Alexander Garden.


Since then, 50 years have passed, during which the memorial architectural ensemble "Tomb of the Unknown Soldier" has not lost its relevance and importance for our country. Today it is one of the most recognizable monuments of Russia and Moscow. By the decree of the President of the country from 17 in November 2009, to preserve the historical and cultural heritage of the peoples of the Russian Federation, the Tomb of the Unknown Soldier was given the status of the National Memorial of Military Glory. The memorial is included in the State Code of especially valuable objects of cultural heritage of the peoples of our country.

The idea to make December 3 the Day of the Unknown Soldier 25 September 2014 was voiced by Sergey Ivanov, who at the time was the head of the Russian presidential administration. “It would be quite possible to establish such a memorable day, if you like, a day of commemoration,” the official said, responding to the proposal made during his meeting with the winners and participants of the “Search. Finds. Discovery ”conducted among school search teams. Sergei Ivanov emphasized that for Russia such a memorable date would be especially relevant, given that there were no other soldiers like this in the Soviet Union who had gone so far. October 24 The 2014 of the year for the establishment of this memorable date was voted by deputies of the State Duma of the Russian Federation, on November 5 of the same year, the corresponding decree on the establishment of a new memorable date - Day of the Unknown Soldier - was signed by President of the Russian Federation Vladimir Putin. 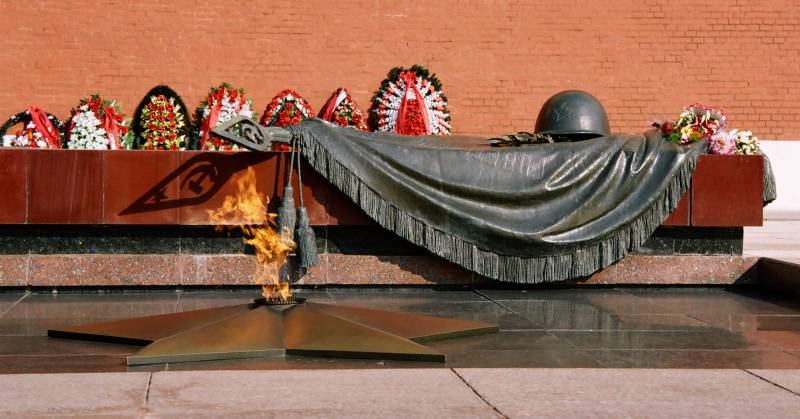 It is worth noting that the first monuments to unknown soldiers began to appear after the First World War. For the first time this very concept, like a memorial, appeared in France. Here, on November 11, 1920, in Paris, near the Arc de Triomphe, an honorary burial was made of an unknown soldier who died on the battlefields of the First World War. Then the inscription appeared on the memorial: “Un soldat inconnu”, and the Eternal Flame was solemnly lit next to it. Later, a similar memorial appeared in Great Britain at Westminster Abbey, the inscription read: "Soldier of the Great War, whose name is known to God." Later, a similar memorial complex appeared in the United States; it was opened at the Washington Cemetery in Arlington, where the ashes of an unknown soldier who died in World War I were buried. The inscription on the tombstone read: “The American soldier, whose name is known only to God, rests with glory and honor here.

In our country, the idea of ​​creating such a memorial complex was addressed before the celebration of the 25 anniversary of the defeat of the German troops near Moscow in the winter of 1941. In early December 1966, the newspapers wrote that on December X Muscovites bowed their heads in front of one of the heroes of the Great Patriotic War - an unknown soldier who died on the near approaches to Moscow in the winter of 3. In particular, the newspaper Izvestia wrote: “... he was slain for his Fatherland, for his native Moscow. That's all we know about him. ”

2 December 1966 of the year to a former grave site - the mass grave of Soviet soldiers at 41-m kilometer of the Leningradskoye highway around noon arrived a group of soldiers and officers of the Tamansk division, as well as representatives of the Moscow City Council. The soldiers cleared the snow around the grave and set about the procedure for opening the burial. In 14: 30, the remains of one of the soldiers who were buried in a mass grave were placed in a coffin and covered on top with an orange-black ribbon, the symbol of the soldier’s Order of Glory. On the lid of the coffin was a soldier's helmet sample 1941 year. The coffin with the remains of an unknown soldier was installed on a pedestal. All evening and all night, as well as the next morning, taking turns every two hours, a guard of honor was held at the coffin of young soldiers of the Taman Division with machine guns in their hands, as well as veterans of the Great Patriotic War. Cars passing along the highway stopped nearby, people from the neighboring villages and towns came here, they even came from Zelenograd itself. 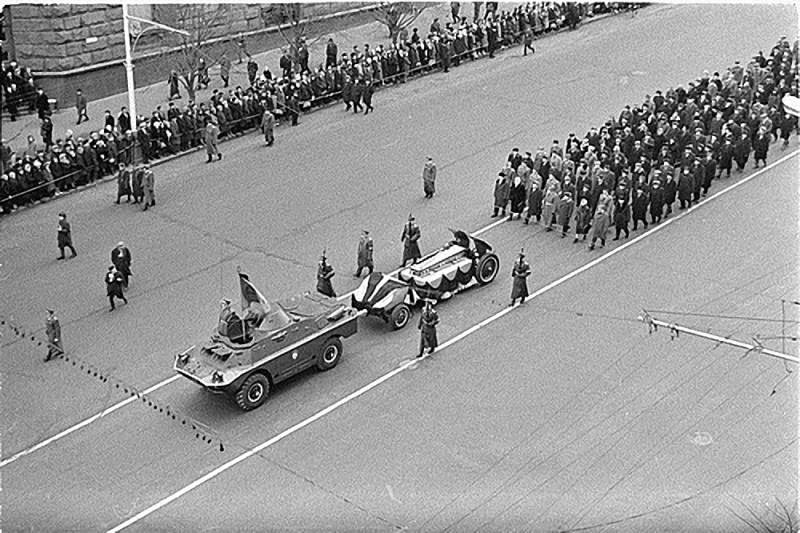 Builders stumbled across a mass grave of Soviet soldiers near Zelenograd, this happened before the opening of the famous memorial. It is worth noting that the requirements for the choice of a fighter were tough, they had to exclude any possible accident. The mass grave chosen to take the ashes of the warrior from it was in the place where the Germans could not reach, so the soldiers buried here were not in captivity. At one of the fighters, his form with the rank and file of the rank and file was very well preserved - the Unknown soldier had to be the simplest fighter. Another subtle point was that the deceased, who was buried by the Kremlin, should not have been a deserter or a soldier who committed a military crime and was shot for it. However, before the executioner, the belt was removed from the criminal, and the belt was in place from the grave near Zelenograd. No documents were found for the selected soldier and nothing that could reveal his identity to us - he fell like an unknown hero of the battle for Moscow. From 1966, the Unknown Soldier, he became for the whole of our vast country.

3 December 1966 of the year 11 hours 45 minutes coffin with a fighter was installed on an open car, which moved along the highway towards the capital. Everywhere along the way, the mourning procession was escorted by residents of the Moscow region, who lined up along the Leningrad highway to bid farewell to an unknown hero. Already in Moscow, at the entrance to Gorky Street (today Tverskaya), the coffin from the car was moved to an artillery carriage. Then an armored personnel carrier with a deployed battle flag headed further to the sounds of a mourning march performed by a military brass band. He was accompanied by soldiers of honor, war veterans, participants in the defense of Moscow.

The end point of the route was the Alexander Garden near the Kremlin. On the podium among the leaders of the country and the party were the participants in the battle for Moscow - the marshals of the Soviet Union, K. K. Rokossovsky and G. K. Zhukov. During the rally, Rokossovsky said the following words: “The Tomb of the Unknown Soldier near the ancient walls of the Moscow Kremlin will become a monument to eternal glory to the heroes who died on the battlefield for their native land, here the dust of one of those who defended Moscow with his breast”. After the mourning rally was completed, the coffin was lowered into a grave near the Kremlin wall. Then the artillery salute thundered, the battalions of all types of troops marched in a solemn march along Manezhnaya Square, thus giving military honors to the Unknown Soldier. 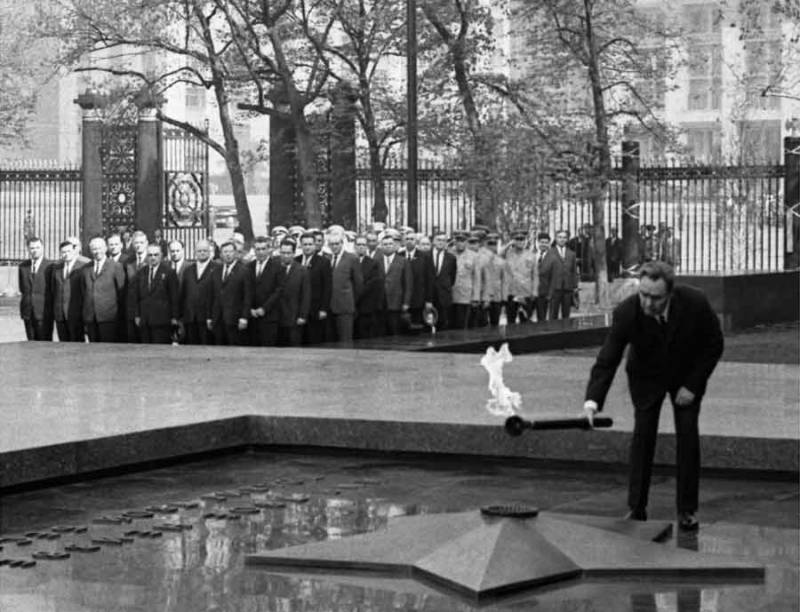 A few months later, on May 10, 8, on the eve of Victory Day, the official opening of the entire memorial complex “Tomb of the Unknown Soldier” took place, and the Eternal Flame was lit. The eternal flame was brought to Moscow from a war memorial located in Leningrad on the Field of Mars, where the victims of the Revolution were buried. Leonid Brezhnev personally lit him in Moscow at the tomb of the Unknown Soldier, who received the torch from the hands of the Hero of the Soviet Union Alexei Maresyev.

The memorial is a tombstone, which is covered with a bronze banner. On the banner is a laurel branch and a soldier's helmet, which were also made of bronze. In the center of the memorial complex there was a bronze five-pointed star, in which the fire of glory is eternal. Near the fire is the famous inscription: "Your name is unknown, your feat is immortal." The letters of the inscription are made of labradorite. The inscription is used in the literal sense, as a symbol of all, without exception, of the dead warriors who remain forever unknown. Right next to the Tomb of the Unknown Soldier is a granite alley, on which dark red porphyry bollards are located with capsules containing them, containing land from the hero-cities: Leningrad, Stalingrad (the name was returned in 2004, Volgograd was specified before), Kiev , Odessa, Sevastopol, Minsk, Kerch, Novorossiysk, Tula and the hero-fortress Brest.

From December 12 1997, in accordance with the presidential decree, the guard post No. XXUMX of the guard of honor was moved from Lenin's Mausoleum to the Tomb of the Unknown Soldier. The guard service here is carried by members of the Presidential Regiment. At present, the memorial is a place to which wreaths are laid on holidays and which are visited by numerous delegations, including those arriving in the Russian capital with official visits of the heads of foreign governments and states. Also, the memorial is one of the most popular places among tourists and newlyweds in Moscow. 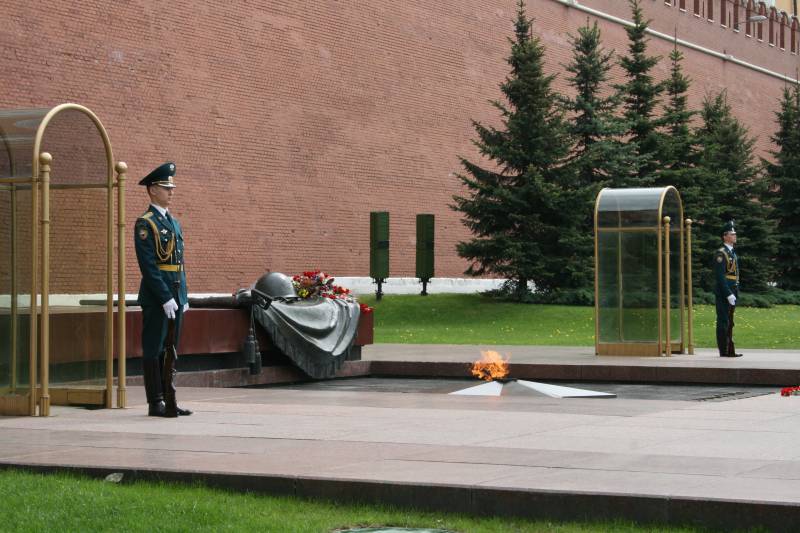