December 3 2016
16
A successful test at the Semipalatinsk test site of the first atomic charge RDS-1 with a power of 20 kilotons, held on August 29 1949, meant only that the United States lost the geopolitical status of the only nuclear power. Following this, the Soviet Union was to proceed to the solution of the next strategic task - the deployment of production of bombs ready for combat use. It was decided to create a plant with strategic storage in Arzamas-16 (now Sarov) with KB-11, that is, where RDS-1 was born. 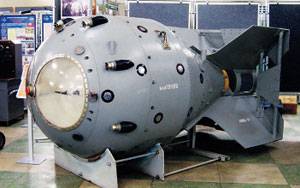 18 November 1949 of the year at a meeting of the Special Committee at the USSR Council of Ministers discussed the development of the national nuclear weapons complex, as they say, under the protocol. Berievsky. Item VII of this protocol was called “On the serial production of finished products RDS-1”, the main responsible for the implementation of which was Lavrenty Pavlovich. In a well-protected area, KB-11 was to build an assembly plant. It gained fame, of course, among those who were supposed to be plant No. 551, later getting a more sonorous name — the Avangard Electromechanical Plant. Personnel backbone was made by specialists of KB-11. Many of them came from strict special operations from various industrial enterprises.

The plant’s capacities were designed for the production of two or three RDS-1 aerial bombs (another designation - “501 product”) per month. It was expected that it would begin in December of 1950, but with all the labor heroism of the construction prisoners and "free" specialists did not have time. The Kremlin was unhappy, but taking into account the objective difficulties, of which there were many, lowered the new term - the second half of next year. Indeed, in December of the 1951, the first three serial RDS-1 bombs left the factory for the KB-11 special storage. Recall that the "conspiratorial" abbreviation RDS, which is then generally assigned with different digital indices to samples of the Soviet nuclear weapons The first generation meant “special jet engine”, which, however, was interpreted by the initiates as both “Stalin’s jet engine” and how “Russia makes itself”.

It must be said that these were not the first RDS-1 in the emergency arsenal of the USSR. First, the KB-11 gave the Motherland atomic bombs, so to speak, manual, laboratory assemblies: two in the 1949, nine in the 1950 and 18 in the 10 months 1951 of the year. (Also, in the hand made mode, the situation was similar with similar products at Los Alamos). Each of the pieces, and then the serial ones, was accepted by the commission under the supervision of the chief designer of KB-11, Julius Khariton. The creation of this stock cost the country, which had not yet recovered from military hardships, of tremendous efforts and costs, which fell on the people, who almost immediately after the Victory began to besiege political informators with questions: when finally and our country will have an atomic miracle weapon.

Of course, the super-secret control figures were not communicated to the public. Nor did it know that the gap in nuclear capabilities between the USSR and the USA continued to remain huge. Suffice it to say that the States in 1951 had 438 nuclear bombs. But the nuclear monopoly was buried forever.

The product RDS-1 with a power of the order of 20 kilotons was a domestic equivalent - but not a copy! - American plutonium bomb "Fat Man" (Fatman). The mass of the RDS-1 was close to five tons, which excluded the use of the first Soviet nuclear bomb from any other combat aircraft, except for heavy long-range bombers. The system ensuring the use of RDS-1 on the Tu-4A (A - atomic) was developed by Alexander Nadashkevich. Only these piston bombers themselves, which were, so to speak, “pirated copies” of the American B-29 “Superfortress” (the very ones that burned the Hiroshima and Nagasaki atomic flames), were already outdated and, due to low speed, were a priori easy prey for reactive enemy fighters. This was convincingly proved by the Soviet pilots, famously cracking down on the American B-29 during the war in Korea. But "on the way" were already jet long-range Tu-16 and M-4.

The KB-11 labor soon adopted advanced RDS-2 nuclear bombs with plutonium (38 kilotons) and RDS-3 with uranium-plutonium (42 kilotons) charges. All previously released RDS-1 converted into RDS-2. At the same time, the power of the charges was significantly increased, and, on the contrary, the mass of the bombs was reduced. The nuclear shield of the Fatherland was becoming more and more durable, although until parity with the United States (which, by the way, is still the case today), there were still two decades.