December 3 2016
33
Turkey is currently the only NATO member that is actually preparing for war with several neighboring countries at the same time, and its main potential opponent is another member of the alliance - Greece.


Turkey retains the draft principle of manning the Armed Forces, which in terms of the number and quantity of weapons and equipment occupy the second place in NATO after the United States. At the same time, the personnel have combat experience (against the Kurds), and the Turks have much higher resistance to their own losses than any other NATO army.

The country has a powerful military-industrial complex, capable of producing military equipment of almost all classes. The weak point of the Turkish Armed Forces is a large proportion of obsolete weapons. In addition, recently, the high command has been subjected to mass repressions by the political leadership of the country, which by no means strengthened the army.

The ground forces have four field armies (PAs) and one command, as well as the 15 training infantry division.

2-I PA (Malatya) covers the south-east of the country, the borders with Syria and Iraq, fighting the Kurds. It consists of three AKs: 4, 6, 7. The 4 st AK (Ankara) includes the 28 motorized infantry, the 1 and 2 th commandos (MTR), the 58 th artillery brigade, the regiment of the presidential guard. 6-th AK (Adana): 5-I armored and 39-I motorized infantry brigade, 106-th artillery regiment. 7-th AK (Diyarbakyr): 3-I infantry division, 16 and 70-I mechanized, 2 and 6-I motorized infantry, 20 and 172-I armored, 34-I border, mountain special forces, ZNUMX-I, special forces, I’MNHMX, I’MNIXX-I, 14 NNMX-I armored, 3-i artillery regiment.

4-I Aegean PA (Izmir) is focused on the south-west of the country, that is, the coast of the Aegean Sea, as well as the northern part of Cyprus (the Turkish Republic of Northern Cyprus is recognized only by Ankara). It has a transport division, 11 commando, 19 infantry, 1 and 3 infantry training, 57 artillery training brigade, 2 infantry regiment. 11-st AK is deployed in Cyprus: 28 and 39-i infantry divisions, 14-I armored brigade, artillery, 41 and 49-i special regiment.

In recent years, Turkey has become the second (after Bulgaria) NATO country, which has tactical missiles in service. These are 72 American ATACMS (PU for them are MLRS MLRS) and at least 100 own J-600T, copied from Chinese B-611. 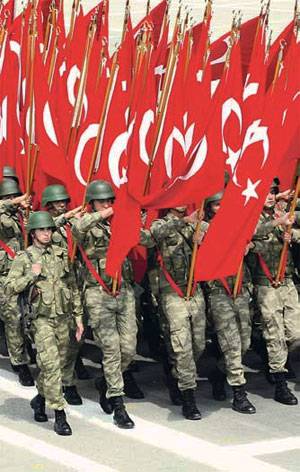 The basis of the surface fleet 22 frigates: 8 of Gaziantep type (American Oliver Perry), 4 of Yavuz (German MEKO2000TN) and Barbaros (MEKO2000TN-II), 6 Burak (French D'Estien D'Or) ) In addition, 5 American Knox frigates are withdrawn from the Navy and are in the sludge.

There are 18 newest corvettes of their own construction: 2 type "Hell", 16 "Tuzla" (the latter are sometimes classified as patrol boats).

All German-built or local rocket boats, but according to German projects, are 9 of the type Kilich, 10 FPB57 (2 Yildyz, 4 Ruzgar and 4 Dogan, slightly different in equipment), 4 of the old Kartal ( another 4 withdrawn from the Navy). There are 17 patrol boats: 6 AB-25, 4 PGM71, 6 Karamürsel and 1 Trabzon, and also up to 80 small patrol boats on the coast guard.

Turkey remains the strongest and most dangerous adversary of Armenia, our ally in the CSTO. Ankara is not just actively seeking the overthrow of the Syrian President Assad, but is (along with Qatar) one of the main creators and sponsors of the IG banned in Russia. Actively supports the Majlis of the Crimean Tatars, which occupies a radically anti-Russian position. In general, President Erdogan does not hide his desire to restore the Ottoman Empire at least in a reduced form. In this regard, the Kremlin’s attempts to “tie up Ankara with a pipe,” that is, with economic (especially energy) interests, are obviously untenable. Geopolitics was, is and will be more important, and here our interests are opposed. Therefore, Turkey is one of the main potential opponents of Russia (which was confirmed a year ago), and the opportunity to change the situation is not visible.

True, the personality traits of Erdogan are such that lately he has managed to quarrel with virtually the whole world. This led to his microcapitulation in front of Russia this summer. As a result, Ankara ceased to demand the immediate overthrow of Assad and began to imitate the fight against IS. The main victim of this process, however, became the Syrian Kurds. They made a common mistake - they too believed Washington and this summer, for the first time in the entire period of the civil war, they began to fight, albeit on a limited scale, against the Syrian army. The retribution followed instantly - Moscow and Damascus ceased to object to Turkey’s attacks on the Kurds. And Washington, of course, did not help them with anything. Under current conditions, friendship with him is suicidal, the Kurds have become just another confirmation of this fact (“With respect to the partisans”).

All this, however, does not negate the fact that Ankara is an enemy to us, and not an ally, and not even a fellow traveler. The next blow in the back she will inflict on us at the first opportunity. Moreover, microcapitulation in front of Moscow became Erdogan’s strongest incentive for revenge. However, if the new US President Trump really decides to fight Islamic radicals, and not Assad, this will lead to a radical change in the situation in the Middle East. Ankara is unlikely to bring joy.