Given the insufficient number of combat vehicles, even some of the fighters had to be transferred to the reconnaissance Aviation. And this is in anticipation of the war with Poland, which had strong, including fighter, aircraft. The most acute shortage of aircraft was felt in the 1st Cavalry Army, which was especially severely affected by enemy air raids. The breadth of fronts, the lack of transport in the squadrons, and the difficult situation in the field of railway transport created difficult conditions for the combat activity of Soviet aviation.

The red command had time to concentrate aviation at the right time in the right place, but with the development of operations, aviation was far behind its infantry. So, the red infantry in the attack on Warsaw, paradoxically, was faster than its aircraft. In these conditions, the fighters, as having a smaller radius of action, were, of course, in an even worse position than the scouts.

Nevertheless, the Red Army air force combat campaign on the Soviet-Polish front from February to August 1920 was the clearest illustration of the high combat activity of the Poles and the effectiveness of Soviet pilots even in the current difficult conditions.

So, February 19 on the Bobruisk 2 direction of the enemy plane, conducting reconnaissance near the positions of the 8 Infantry Division, dropped 7 bombs on the railway track at Telushi station and damaged the railway line. Artillery fire armored they were driven away.

March 17 on the front of the 13 th Army of the Southwestern Front near Novo-Alekseyevka, the enemy aircraft that appeared was attacked by two red planes and retreated.

Moreover, this situation was the rule, not the exception. So, March 30 on the front of the Western Front 16 Army at st. Krupki again a red balloon was attacked by an enemy aircraft, and was driven away by machine-gun fire from the ground and from its gondola.

In April, Polish aviation began to attack the Soviet troops. So, April 12 on the 3 direction of the enemy aircraft, preventing the advance of the red infantry on the der. Shatsilki, dropped a few bombs and fired machine gun fire rifle chains. And the next day, in the Bobruisk direction of the 3 of the enemy's plane, conducting reconnaissance of the rear of the 8 th infantry division, fired machine gun fire der. Liskovskaya.

April 13 was the day of increased ground attack of Polish aircraft. Thus, in the direction of Speech by several enemy aircraft, flying over the advancing on the village. Shatsilki red parts, prevented their advance, dropping bombs and firing rifle chains with machine-gun fire. In the same area, Polish aircraft bombed the headquarters of the 50 Brigade, the village of Charneyka and the bridge across the River Sved.

April 14 active operations of the Polish aviation in the direction of the Speechy direction continued. Several enemy aircraft obstructed the offensive units of the 17 th rifle division, firing at them with machine gun fire and dropping bombs.

On April 17, the enemy attacked the positions of the 4 th Fighter Division, which were in the Borisov direction. 4 of enemy aircraft dropped 7 bombs that killed 1 and injured 4 of the Red Army. They were attacked and the balloon. On the same day, in the direction of Rechitsa, enemy aircraft contributed to the advance of their units in the area of ​​the 508 regiment of the 57 th rifle division, firing the red parts with machine-gun fire.

It was at that time that the Red Fighter Aviation intensified its activity.
19 and 28 on April in Borisov direction, two Polish scouts were attacked by red fighters. And from the end of April, the Red Army fighters actively drove away enemy reconnaissance aircraft.

1 May came the first victories of the Soviet fighters.
First, on the front of the Western Front 16 Army near Priamino, a red fighter attacked an enemy plane at a distance of 20 meters - the latter, apparently badly damaged, fell to a height of 50 meters, and then, leveled, hesitantly pulled at Borisov; secondly, on the Borisov direction 2 of the enemy aircraft, which conducted reconnaissance, were met by Soviet fighters - and one Polish aircraft was shot down.

8 May 2 of the enemy aircraft attacked a red balloon at the Priyamino station in the Borisov direction, firing at it with machine gun fire and dropping bombs on the winch. After returning machine-gun fire from the ground and from the gondola of the balloon, they disappeared in the direction of Borisov, without causing harm to the balloon.

And May 10 on the Bobruisk direction 3 of the enemy plane appeared over the airfield of the 1 th Fighter Division, firing incendiary bullets at the tents with the aircraft. Fighters having risen into the air, one of the enemy aircraft was shot down and fell in the Zhlobin region. The pilot was taken prisoner.

May was a productive month for the Red Warriors.
14 May on Borisov direction 3 Polish aircraft, engaged in reconnaissance, were intercepted by Soviet fighters. One Polish plane was shot down and fell in the village of der. Horsetails

The second half of May was marked by the loss of balloons. So, on May 18 at the front of the 16 Army of the Western Front (Borisov) a Polish plane, suddenly attacking, burned a balloon. And on May 20, on the front of the same army, suddenly appearing from behind the forest, an enemy plane attacked another balloon and also burned it.

Also 10 of June at the Borisov direction 2 of the enemy aircraft attacked a red balloon at st. The flocks, but attacked by the fighters, left without causing harm to the object of attack. On the same day, in the Bobruisk area, the 2 of the enemy aircraft also attacked the aerostat in the area of ​​art. The device, dropping 6 bombs on the winch and firing a balloon from a machine gun - met with intense machine-gun fire from the balloon's nacelle and from the ground, they also escaped without causing harm. An unsuccessful attack on the aerostat Polish aircraft carried out 14 June at the front of the 16 Army at Shcherbinka and 15 June at the 621 th verst of the Alexander Railway.

On July 3, at the front of the South-Western 13 Army, the red fighters met the enemy's 4 aircraft, one of which was shot down and the other, reduced to 50 meters, went to their positions, while the other two did not accept retired. The pilots of the 13 Army again distinguished themselves on this day. At Shparrau, they forced the enemy's 3 bombardment of an enemy aircraft to drop their bombs in the field and escape.

Again, the enemy's pilots were thwarted by the pilots of the South-Western Front on July 28 on the front of the 13 Army near Alexandrovka. The 4 of the enemy aircraft, which bombed and attacked with the red fighters, went off with a large decline.

On August 15, on the front of the 13 Army of the Southwestern Front, near the Black Domna, a red plane, firing at the enemy infantry with a machine gun, noticed 7 enemy planes above him and engaged two of them. A similar act was also committed by the fighter at Khut Sysoev, which attacked a group of six Polish aircraft.

On August 28, a Soviet fighter also attacked a group of four enemy aircraft and pursued it until it fired the ammunition.

Describing the struggle in the air in the 1920 year, it should be noted that the Polish pilots widely used group tactics - on the French model. But despite this, as well as problems in Soviet aviation, his combat activities were suppressed by the work of the red fighters.

In May, a break in the air. 5 enemy aircraft were shot down - and it made an extremely depressing impression on the Poles. The captive pilot from the plane shot down by Shirinkin’s military officer could not come to his senses when he had to meet his winner, and when he saw his small modest figure. Polish pilots, according to this prisoner, imagined him a tall, bearded, bloodthirsty Bolshevik, hung with bombs and machine-gun belts.

Morally, the enemy was so depressed by the constant attacks of the red fighters that it surrendered its air positions. In July, the Poles on the Western Front no longer flew. Only when the Red Army units approached the Vistula, the 3 of Polish aircraft attacked the military man Ivanov over Warsaw, and two enemy flights to Volkovysk were noted for reconnaissance purposes.

Of the total number of encounters in the air, 80% is an attack from the red military. Opponent lost the initiative. And the Soviet fighters dared to attack whole groups of Polish aircraft alone.

The enemy switched mainly to tethered balloons. It was recorded 22 attacks of Polish aircraft on Soviet balloons.

On the South-Western Front, the enemy began its operations with the activities of small air groups and, although such a striking superiority of the red pilots, as it was on the Western Front, was not here, yet its activity was suppressed, and by August the Poles were forced to go to flights in more strong groups, respectively, reducing the number of sorties.

Moreover, the results were achieved by red aviation with scarce resources and organizational and technical problems - and achieved fairly quickly. Under the blows of the red fighters, the enemy quickly lowered his “pansy ambition” and, at the end of the campaign, if he attacked the Soviet aircraft, it was only with a significant superiority in strength. 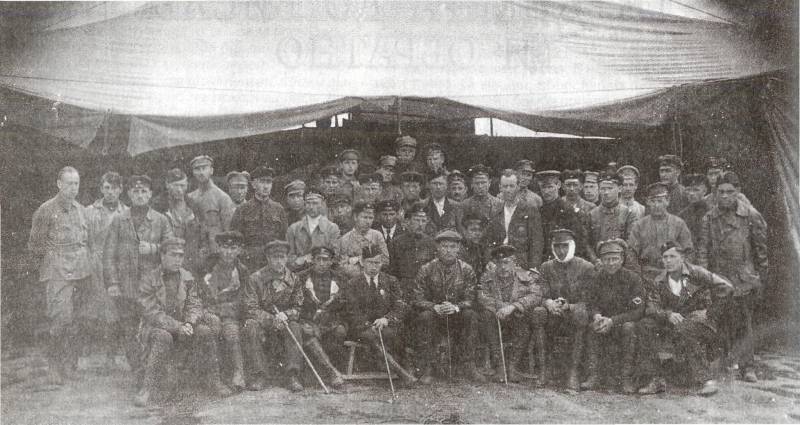 The personnel of the 4 th Fighter Division. The fifth from the left in the front row is division commander A. D. Shirinkin.
Kondratyev V., Khairulin M. Aviation of the Civil War. - M., 2000.