December 2 2016
40
We have become accustomed to the fact that events in the military environment, which will not please us (to pass on the metal, disband, and the like), occur quietly and peacefully. Why once again attract attention? 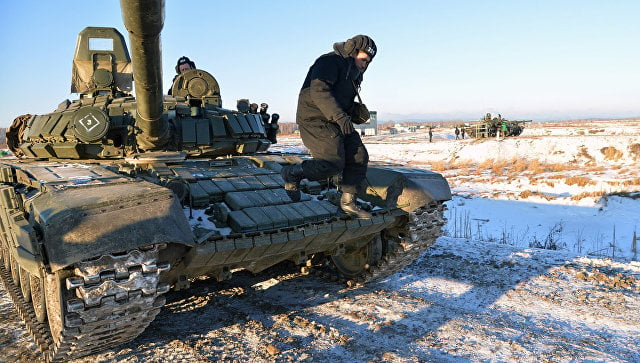 But about when something is being built, I agree, we must speak in full voice. Especially if what was recreated was destroyed before.

So it happened this time. In the Central Military District, the 90th Guards Vitebsk-Novgorod twice Red Banner was recreated, formed and staffed tank division.

The division was formed in accordance with the decree of the Supreme Commander and Directive of the Minister of Defense of the Russian Federation from September 13 2016 of the year with the deployment of its units in the Chelyabinsk and Sverdlovsk regions.

I was skeptical about the news of the creation of the 1 tank army, which was created ... well, we all remember what it was created from, here is a slightly different attitude.

Indeed, we have not so many tank units.

For example, let me give 20-th Guards Combined-Arms Army, which is actually a shield in the western direction. Army units are deployed in the Voronezh, Kursk, Belgorod, Nizhny Novgorod, Smolensk, Bryansk regions.

So, the only tank formation of the 20 Army is the 1-I Ural-Lviv Tank Brigade (the former 10-I tank division, "Black Knives").

Yes, and I must say that the First Ural-Lviv Tank Brigade was recreated in 2015 in the Nizhny Novgorod region and relocated to Boguchar.

Therefore, the creation of another fist, capable of embedding, if need be, is genuinely happy and welcome.

All the more so история The 90 Panzer Division has many glorious pages.

90-th TD starts counting its history from 1 September 1941, when the formation of the 378-th Infantry Division began in the Siberian Military District.

It was one of those Siberian divisions that deserved honor and glory from Moscow to Berlin.

Having received the baptism of fire in the Volkhov region, the division went through several operations in the north-western direction.

The warriors of this particular division were the first 20 of January 1944 of the year broke into Novgorod and hoisted the banner of the 1258 Infantry Regiment over the Novgorod Kremlin. By order of the Supreme Command Headquarters, the 378 Division received the honorary title Novgorodskaya.

The division was almost completely destroyed in the battles to block and destroy the group in Kurland. By the end of February 1945, about 2 thousands of personnel remained in the division.

13 March 1945, the division was disbanded by decision of the front command. The remnants of personnel and military property, as well as the honorary name "Novgorod" and the Order of the Red Banner were transferred to the 90 Guards Rifle Division.

90-I Guards Red Banner Vitebsk sd also passed its way. About her participation in the release of Vitebsk says the honorary name.

So at the confluence of the two divisions, the 90-I Guard, twice the Red Banner Vitebsk-Novgorod Rifle Division, turned out.

90-I Guard SD after the end of the war went through a number of re-formations. At first, it became the 26-th Guards Mechanized Division, in 1957, at its base, the 38-th Guards Tank Division was formed.

In 1965, after the return of the division, the 90 numbers, under which she fought in World War II, became known as the 90-I Guards Tank Vitebsk-Novgorod twice Red Banner Division.

However, democratic transformations in our country after 1991, first, in 1996, turned the division into 70-th Guards Vitebsk-Novgorod twice Red Banner weapons and equipment storage base, and in 1997, they disbanded it altogether.

And now the division rises for the third time under the banner.

As our source told us, he is serving in one of the divisions of the division, some of them are really fully equipped with equipment and personnel, with 2 / 3 being contract soldiers.

We sincerely wish the soldiers and officers of the division successful preparation for the performance of any assigned tasks!