December 8 2016
31
How often we say that our "own" is better than someone else's. Meanwhile, in the technique of the concept of "own" and "alien" very often, in fact, do not mean anything. Well, in the field of weapons, the best example of this, perhaps, are the pistols of the Spanish company "Bonifacio Echeverria SA" from Eibar, which began production weapons about 1908 year with the production of the gun, the development of which is usually attributed to Juan Echeverría himself. There was practically no information about the company and about it, especially regarding the first years of operation of this enterprise, but it can be said that the pistols that received the name “old”, that is, “star”, were simply copied from the “mannisher "1901 of the year. But at the same time, their similarity was not an identity, so the Austrian gunsmith could not sue the Spaniards. Again, it is not clear why, but the “old” trademark was registered only in 1919, i.e. 18 years after the first pistols of this name were fired! 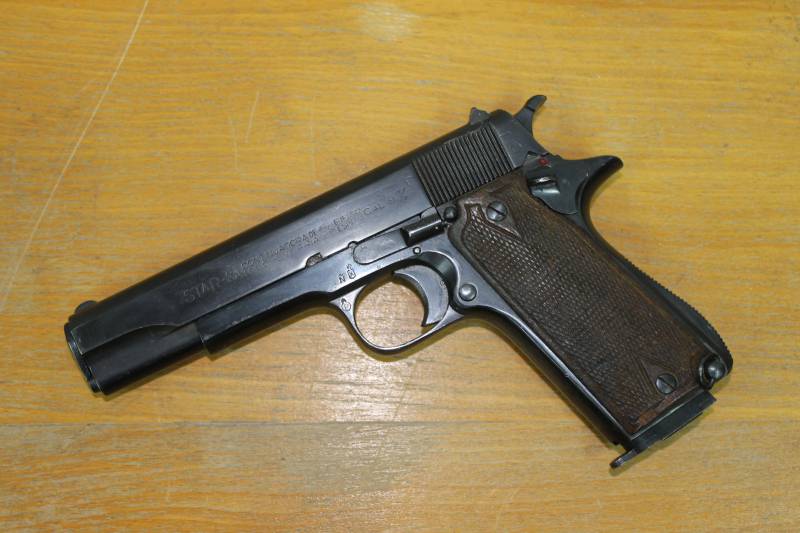 The gun "Star" model B caliber 9-mm chambered for "Parabellum".

At this time, Bonifacio Echeverría was already the main owner of the company, and its chief designer. And then, namely, after the 1920 of the year, the next “old” with a closed shutter-casing appeared, designed on the model of the “Colt” M-1911. But again on the basis. Well, then the Echeverría and Kº company became one of those four Spanish arms factories that had the opportunity to work after the civil war, and it still exists today and also produces pistols under the “old” brand - which is to say, solid longevity ! 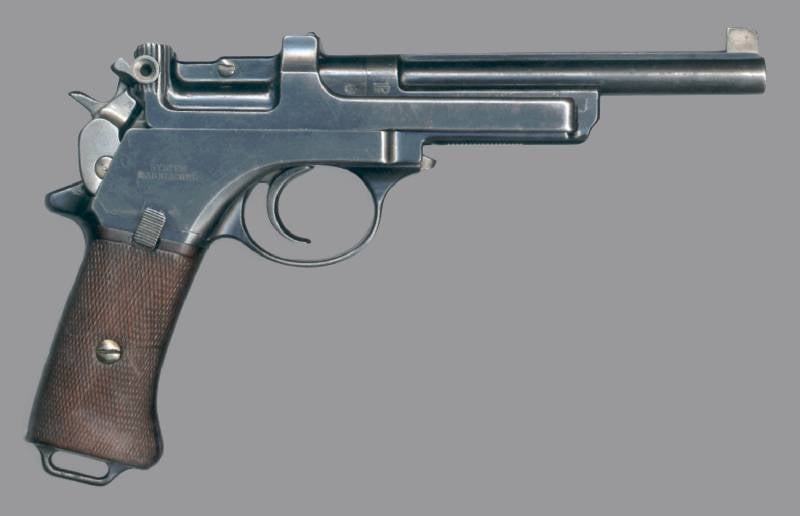 The Austrian "Mannicher" 1901. The design characteristic of revolvers is evident.

Well, we consider its samples, starting with the model "Star" 1908 of the year. It is clear that he appeared a little earlier, namely at the end of 1907, and for a long time only a very narrow circle of specialists knew about it. It was a pistol with a fixed barrel, a free open casing-shutter and ribbed washers on it for the fingers - why it is spoken of as a copy of a mannicher pistol.

The openly located trigger only increased the similarity with the mannicher pistol, but that was where it ended, since the mannicher was distinguished by a curved and relatively thin handle, while the "old" had a thick handle of "chopped" outlines and a completely different trigger. This was done because the “Austrian” was charged with an ammunition pack, whereas the “Spaniard” had a removable magazine with a spring for eight rounds of 6,35-mm auto-caliber.

AUTOMATIC PISTOL STAR PATENT was written on the cover-casing, and the cheeks at the handle were made of hard rubber and had a checkered notch. The length of the gun 115 mm. Mass of a pistol without cartridges: 445 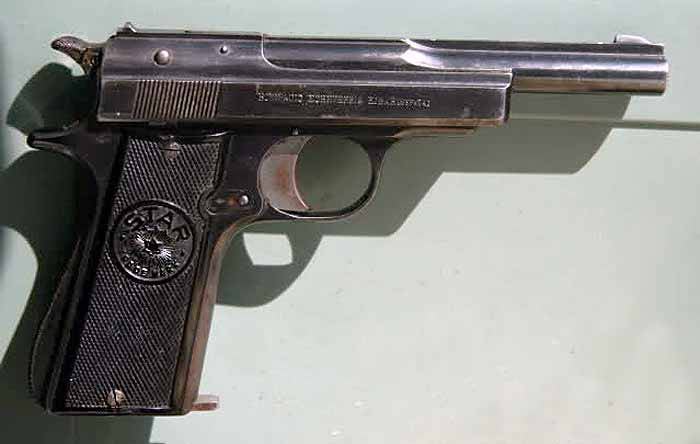 In 1914, the Star pistol appeared under the 6,35 and 7,65-mm caliber cartridges, which differed from the previous sample only in details. So, in particular, it appeared the brand "old" - a six-pointed star with rays. The length of the gun was 175 mm. Mass of a pistol without cartridges: 850 g. Barrel length: 112 mm. Shop traditional design for eight rounds. 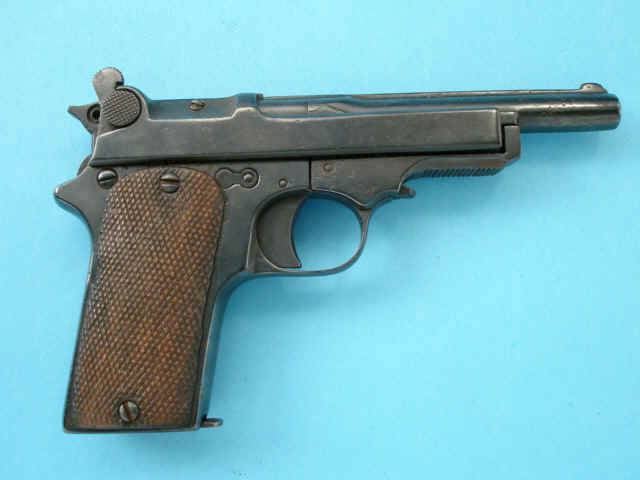 It was followed by the “Star” pistol of the 1919 model of the year (model 1), which differed in the order of disassembly: for the first models of these pistols, the shutter-casing was separated by pressing the notched peg located in front of the trigger guard. At the 1919 pistol, he was held by a special latch on the frame in front of the safety bracket.

The different versions of the 1919 pistol of the year were made for 6,35 and 7,65 mm “auto” cartridges or for 9 mm “short” cartridge and had the most different barrel lengths - some people like it. Here the inscription was already different: BONIFACIO ECHEVERRIA EI BAR (ESPANA).

The gun “Model military” saw the light in 1920 year, and became a kind of transitional model between models in the image of “Mannicher” and pistols of the type “Colt Browning”. “Model military” was made on the basis of the American “Colt” M-1911 caliber .45 and had the same mechanism of locking the bore - that is, “Browning earring”. But this model also had differences, as without them. On the Spanish pistol there was no frame fuse. And the handle itself is more straightforward outlines. 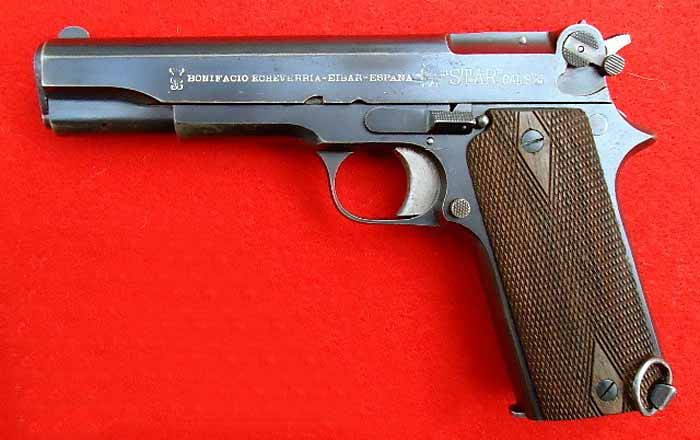 Another characteristic feature was the design of the back of the shutter-casing. She was raised and equipped with two corrugated "pills" for the fingers. The safety lever is located on the left, where it turns a special valve that prevents the trigger from striking the firing pin. To ensure its downward movement on the closure-casing, a notch has been made.

The gun used cartridges caliber 9-mm "largo" ("Bergman-Bayard"), which was done in the interests of its use in the Spanish army. But the military chose the Astra, and Echeverría sent it to a commercial sale, at the same time supplementing it with modifications for the .38 “super” and .45 AKP cartridges. The length of the gun 200 mm. Mass of a pistol without cartridges: 1100 g. Barrel length 122 mm. Shop also for eight rounds. 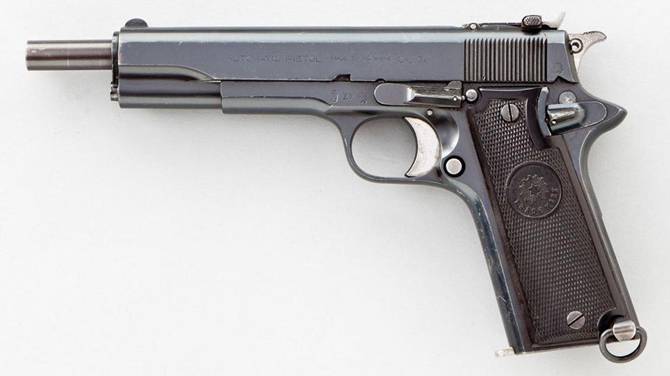 Star Pistol Model A 7,63 × 25 Mauser. Of course, the protruding barrel is a bit unusual, but it was possible to make a thread under the muffler on it!

A year later, the “Star” pistol Model A (Model A) appeared, which was a modification of “Model Military”: with a casing like a typical Colt - i.e. on it were made vertical notches for the fingers. A small hole was made in the head of the hammer. Flap fuse rearranged to the rear left upper frame behind the cheek handles, as it was from the outset provided for the Colts. Aim devices were made on the model of "Browning" model "High Power".

Model A, or “Model 1921 of the Year,” was made for different cartridges, in particular, 7,63-mm cartridge “Mauser”, 9-mm “Largo” and .45 AKP. Some samples on the back end of the handle had grooves for the holster-butt. In the first pistols the frame fuse was absent, but then in later models it was decided to install it again, and the length of the lever of this fuse was almost equal to the length of the entire rear surface of the handle.

Model A gained great popularity among the so-called Guards of Seville, which it adopted in October 1922 of the year under the designation “Pistol“ star ”de 9 mm, model 1922, pair path de la Guardia Civil”. There is a mark on the casing: BONIFACIO ECHEVERRIA over the words EIBAR (ESPANA), in front of which there is an image of a six-pointed star and the name “STAR” CAL .9M / M, and their belonging to “Guard of Seville” is certified by the letters GC under the crown. The first pistols received wooden cheeks with a rhombic notch on the handles, which were replaced with plastic ones in later editions. So for those who make a film about the civil war in Spain and there is used a pistol in the course of the action, it is best to take exactly “Star”, especially if the Guardsman from “Guard of Sevil” shoots. 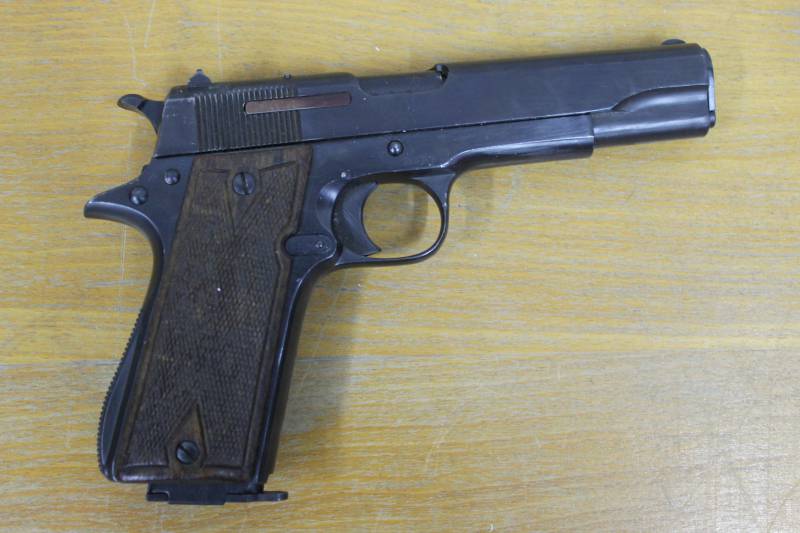 "Star" Model B. Perhaps the most convenient and attractive model in the family of "old" and ... nine rounds, yet more than eight and seven.

The “Star” pistol Model B (Model C) appeared after the 1926 of the year and resembled the “Colt” even more, first of all, by the handle shape. Hole with a cock on it removed. The gun was developed under the powerful cartridge "parabellum" caliber 9-mm. It was produced in the 30s both before and after the end of the Spanish Civil War, and in 1941 - 1944. more 35 000 pieces purchased by the German army. So this gun had to be fought outside Spain. The release of the Model B gun was stopped around 1984 of the year. The length of the gun 215 mm. Mass of a pistol without cartridges: 1085 g. Barrel length 122 mm. The store has now become more capacious: nine cartridges were placed in it.

In 1946, the “Super” B model (Model Super B) appeared, in which instead of the swinging “Browning earring” a “Browning ledge” was used. In the same year, this gun was adopted by the army of Spain. And not surprisingly, compared with the American “colt” of the classic type and caliber, it was lighter and had nine rounds in the store, not seven, but nine. The powerful cartridge "parabellum", however, even with a smaller caliber had an excellent stopping effect. Well, the fact that these pistols look like twins looks like the Spanish military was not at all embarrassed - the main thing is that the pistol shoots well!

Then a commercial model of BM with a steel frame was launched, which was one of the smallest pistols that had an interlocking bolt for the 9-mm cartridge “parabellum”. 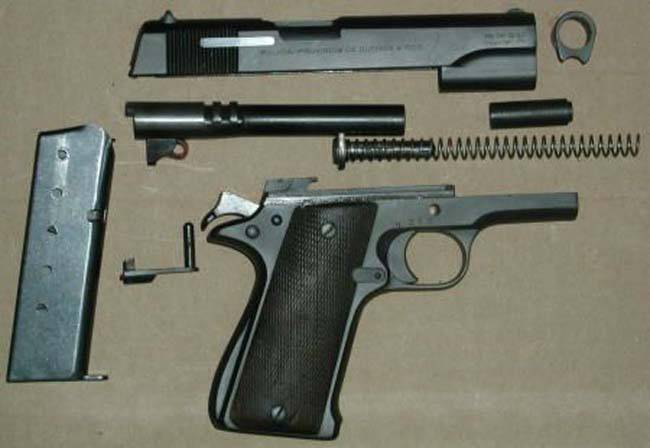 Gun "Star" Model P in disassembled form. Nothing differs from models A and B except the caliber, as it is made for sale in the USA. Caliber .45АКП and, accordingly, in the store seven rounds. Weight 1085 d. Length 216 mm. The length of the barrel 122 mm.

The next model of the BCS, also chambered for the 9 mm “parabellum”, weighed very little - only 20 ounces with an 4,24 inch barrel and an eight-round magazine. It also had a colt-specific layout, but the frame fuse was missing. 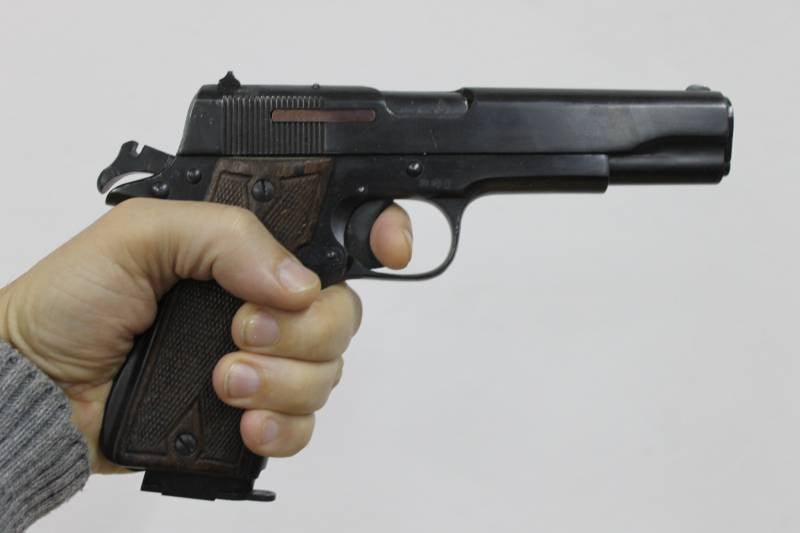 This is how the "Old" Model B looks in the hand of ... left-handed. As you can see, the dimensions are quite acceptable, and weight, and coverage. Cut on the trigger is made to bring the sample in a non-combat condition only. On combat models it is not.

Weight reduction was achieved using a light alloy frame. The BCS model came to replace the BCS model, which differed mainly in its finishing. They had inclined notches for the fingers on the housing-bolt, and the previous model, they were vertical. However, it is the models A and B that are considered the main success of this company and are very widespread. Their reliability, high quality workmanship and good accuracy are noted. The gun is convenient to hold in hand, unlike the American Colt, for which not every hand is suitable! That is a copy, but very, very good! 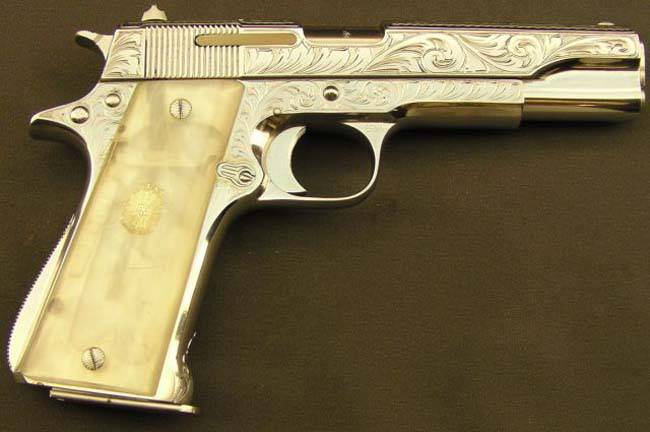