Thesis on evacuation during the Great Patriotic War. Children and ... prisoners

December 6 2016
41
We read the dissertation of V. Solovyov further, and this is what we find there:


“The motto“ All the best for children ”, born during the lifetime of VI Lenin, became the law of the Communist Party’s activities, and constitutes one of its main software installations, the party’s tireless struggle to preserve and consolidate peace, disarmament is a clear manifestation of concern for the younger generation In the period of the Great Patriotic War, which required the involvement of all forces and means for the defense of the country, the problem of protecting life, health, training, educating evacuees became particularly important, reorganizing the life of society for military In other words, the Central Committee of the Higher School of Education / W / pointed out: "However, we are not absorbed in the war, taking care of the children and raising them remains one of our main tasks." 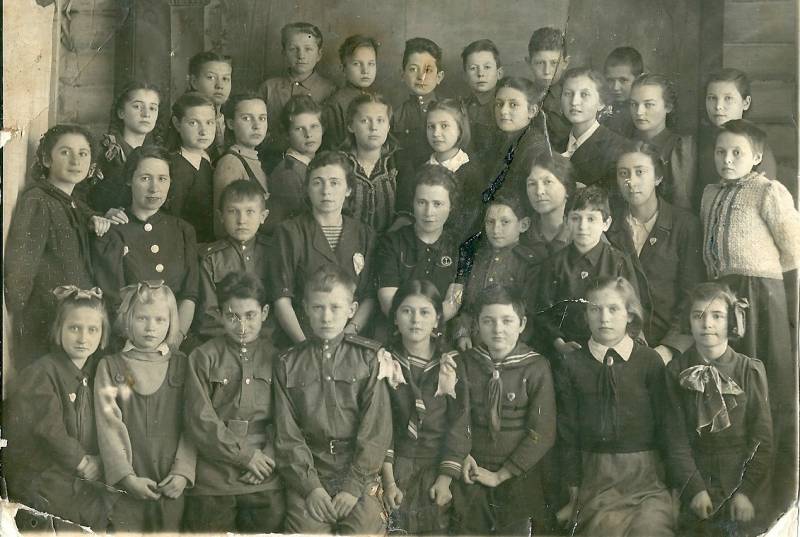 Senior group of one of the Leningrad boarding schools in evacuation, 1944 year.

The party has outlined and implemented a program to save thousands of children from enemy aggression, the party organs created the necessary conditions for the life and study of children at the places where evacuated children's institutions are located. By the end of 1942, 976 relocated orphanages with more than 107 thousands of students were located in the rear areas. This event, unprecedented in scale and organization, became possible thanks to the advantages of the socialist economic system, in which the broad working masses, under the leadership of the Communist Party, take direct part in the affairs of the country. ”

In the Penza region, children from besieged Leningrad were placed in a pine forest in Akhuny, in summer cottages and on the White Lake, where fresh, healthy air is also very beautiful.

It should be noted that by the end of the war in the USSR there were about 6 thousand orphanages or 4340 more than October 1 1940 of the year.

There was a shortage of shoes and warm clothing, since the evacuation was carried out in the summer and early autumn. OK MIC (b) of the Penza region for evacuated children prepared 3000 pairs of boots, 8000 pairs of boots and 3000 coats.

Among evacuated children there were cases of scabies, scurvy, dystrophy, but thanks to the efforts of health workers, the children recovered. 80% of Leningrad children gained weight from 4 to 6 kg, and 13% from 6 to 10 kg, and therefore could be included in the feasible physical work. In general, in the RSFSR orphanage, grain seeds were sown for sowing in the area of ​​3262 ha, vegetable - 706 ha, as well as 3750 cows and many other animals - pigs, sheep, goats, rabbits, chickens, ducks, geese (TSGAOR USSR. F.R. -5462.O.20. D.73.L.19).

Each child care unit was assigned a plot of arable land in 6-7 ha, hayfields - 3-5 ha, which made it possible to live on 3-5 self-sustainment months of the year! In the Kuibyshev region, the Chelna-Vershinsky orphanage No. 1944 was recognized as one of the best in 53, in which there were 17 hectares under crops, there were 3 horses, 4 cows, 3 pigs, 10 bee colonies.

Factory workers usually patronized one or two children's homes and collective farms and military units also acted as chefs. For example, a local military unit has prepared 150 cubic meters of firewood for an orphanage in Stavropol who arrived from Leningrad. Plant №503 manufactured tableware. Factory them. Tinyakova - two pairs of bed linen.

Separately the chef work was conducted by Komsomol members. For example, Komsomol members of the GPZ-4 donated 6 toys to the children of the Timashevsk orphanage for thousands of rubles, made dishes and furniture.

Interestingly, 77,4% of directors of orphanages were members of the Komsomol and candidates for party members.
“In orphanages and schools, in the framework of patriotic education, stories about the life and work of V.I. Lenin, about communist heroes, Komsomol members, pioneers. Exhibitions on the themes: “Heroes of the Great Patriotic War”, “Leningrad will survive and win”, “Help to the front” became widespread. An effective means of fostering patriotism was correspondence with front-line soldiers, which had a beneficial effect on schooling and discipline. Letters were read aloud at the training camp, they were protected as relics.

“The party demanded that school material be associated with life, events of war, teachers of the Russian language use newspaper and magazine articles, writers' works about war for exercises. The themes of the creative works reflected the feats of the Soviet people at the front and in the rear, in the lessons stories attention was focused on the heroic past of our people, its centuries-old struggle with foreign invaders.

A prominent place in the educational process was held by aesthetic education. In the majority of evacuated children's institutions, there were drama and choir groups, and concerts of artistic activity were held regularly. Labor education was rebuilt under the leadership of the party's organs. Children were involved in rendering feasible assistance to the national economy, labor education became more focused, and had practical results. ”

Children from the orphanage №1 from Penza collected 9364 rubles for the construction of the fighter "For a happy childhood." In the 30 workshops of the Kuibyshev region, the orphanage workers worked, sewed linen, shot down the ammunition boxes. ”

Well, but further on V. Solovyov’s thesis, as it turned out, needs serious additions, which at that time it was simply impossible to do, but it is possible now. When we lived in the neighboring rooms of the KSU University dormitory, I obviously did not know this, it did not even occur to me that the subject of evacuation of prisoners could also be the object of study. But besides children, workers and ... the same livestock, it turned out that prisoners who had been kept in prisons were subject to evacuation, who also had to be brought to the East! And this, too, was an important task of the party and government, and the Communists were also engaged in this.

Only from the prisons of Ukraine had to be evacuated to the rear of 34200 prisoners, for whom 1308 cars were needed, at the rate of 50 – 60 people in one car. But it was possible to single out only 300 cars, and place no more than 14000 prisoners in them. In total, in the very first months of the war, from the places of imprisonment in the European part of the USSR, it was necessary to send ... an entire army of 750 thousands of people, which caused their monstrous concentration on the transit points. Therefore, in 1941 - 1942. in the cells of the transfer prisons per prisoner accounted for less than one square meter. And since there were not enough cars, they were transported on foot, under the supervision of a composition of local prisons. It is clear that such an “evacuation” for prisoners was associated with incalculable disasters and very often represented a road to nowhere, regardless of the punishment to which they were to be subjected by a court decision.

The number of militarized rifle guards of the camps and colonies before the start of the war was 134480 people, of whom 130794 was directly involved in guarding the prison contingent and 3686 were involved in the protection of various structures of national economic importance.

To replenish the number of these units, by order of the NKVD of the USSR from 11 March 1941, No. 0127 created additional points in a number of eastern regions to recruit guards to prisons and camps, and at the same time the reservation for conscription to the Red Army was removed from a significant amount of prison and camp guards. As a result, 64763 of a person additionally joined its structure, i.e. 54% of its pre-war number. In many camps and colonies, this figure was almost 90%. At least 15, thousands of shooters and commanders of the militarized guards of the camps and colonies, in particular from the Karelian-Finnish, as well as the Ukrainian and Belarusian SSR, entered the field units of the Red Army in the first days of the war.

As for the former servicemen of the Red Army, who were held captive or surrounded by the territory occupied by the enemy, special camps were created for them by the Decision of the T-bills No. 1066 from December 27 of the year Special Camps, later called verification-filtration. And ... this contingent, as the German troops approached, was also evacuated to the east!

In this case, the prisoners happened to be massively destroyed. Here, for example, only one extract from the memorandum of the military prosecutor of the Vitebsk garrison on the results of the defense check in the garrison from 5 July 1941: "... Yesterday I arrested and tried the military tribunal [former] prison director of the Glubeksky district of the Vileyka region, now the head of the Vitebsk prison, a sergeant of state security, a member of the CPSU (b) [Priemyshev], who was taken out of the Glutek prison in Vitebsk on June 24 convicts and investigative prisoners. On the way, the head of the prison shot the 916 at two times man, and in a place near Ulla during the raid of the plane [the enemy], he ordered the escort, which was 55 man, to shoot the others. In these illegal shootings, he himself took part with a revolver in his hand, explaining his actions [by] that the alleged prisoners they wanted to escape and shouted: “Long live Hitler!” According to [Priimyshev] the statement ... the 67 convicts were shot. We personally found out that among these prisoners more than 714 people were under investigation, and in some cases they were not charged at all. for they were on special checking "(CAMD USSR. F. 500. Op. 208. D. 2524. L. 2-8). Yes, this was also the case, and that is how people who were not guilty of anything died. Just ... they did not have time to check, and destroyed as potential traitors.

Actually the entire document is here - http://allin777.livejournal.com/286200.html - and it should be read very carefully, there is so much very sad information there. So it was too. Then, justifying one big goal, some people sacrificed the lives of other people, completely to the crimes not involved. They ... "just not lucky," but it is impossible to count them today, to separate the "grain from the chaff," alas.
By the way, the Germans entered Vitebsk on July 11 ...