Project "ZZ". What and who threatens Russia

December 1 2016
41
Western experts have identified a number of factors that influence the position of Russia - both internal and external. If you group different opinions, it turns out the following: Russia is weakening due to the growing wedge of contradictions in the Middle East (Syria and Turkey) and the unstable situation in its own economy (the living standards of citizens are falling, a strong dependence on commodity trade remains with a low world oil price) . The third factor is active opposition to the “hidden Russian influence” of the intelligence services and departments of the United States. 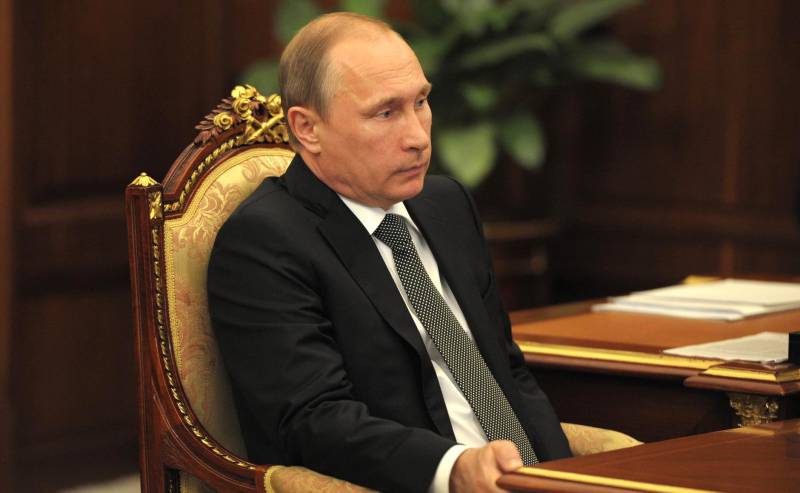 Putin. Photo: the press service of the President of Russia

Senior Researcher of the Atlantic Council in Washington, publicist Anders Oslund on the website Project Syndicate talks about the long-term sustainability of the Russian economy. According to him, "this question remains open."

The expert calls the economic “cronyism” characteristic of Russians, and the “heavy dependence” of Russia on oil revenues, due to which the economy will “suffer” every time when oil prices go down.

On the other hand, one should not forget how the USSR existed. If the Soviet Union taught us something, Aslund points out, then this is how "unstable systems can survive for many years."

Today’s Russia resembles Aslund the very Soviet system with which he first met in 1983, when he lived in Moscow. At that time, the country was being run by a “pedant from the KGB,” Yuri Andropov (“Budapest Butcher”). His health is no good. But it's not that. General economic features, both then and now, were quite similar: low oil prices, non-viable economic ideology, industries were in state ownership. And, of course, authoritarian rule.

There is, however, a difference. One, but important enough. According to Oslund, the current macroeconomic management in Russia is "much more competent than it was in those times."

Today, Russia does not risk being left without funding, despite ongoing Western sanctions. True, the lack of financial resources limits the Kremlin’s foreign policy opportunities and exacerbates the “tension” among Russian elites.

Since oil prices began to fall (in June 2014 of the year), Russia has slipped from 6 to 14 place in the global economic ratings of the International Monetary Fund. Its GDP (measured in US dollars) declined from 2,1 trillion. $ to 1,1 trillion $ and now is just 6% of US GDP. Russia is not economically competitive compared to the United States.

But at the same time, the Russian government is able to maintain a good macroeconomic balance, even if the growth prospects have faded. During 2014, the government stalled, and international reserves even showed a tendency to sharply decrease, but in December of that year, the Central Bank of the Russian Federation finally let the ruble exchange rate float, and the country's macroeconomic conditions stabilized.

By the way, the international reserves of the Russian Federation include the Reserve Fund of the Ministry of Finance, which, as the expert points out, will be exhausted by the year of 2017. But for Putin, the total size of Russia's foreign exchange reserves matters.

In addition, the Ministry of Finance keeps the budget deficit at around 3% of GDP, while the fall in the exchange rate has kept revenues in ruble terms relatively stable. What has the government done to combat budget shortages? It mercilessly "hooked" education, health, and then retirement.

The tight monetary policy of the Central Bank led to a decrease in inflation (to 6%, with a planned decline to 4% next year). It is noteworthy that the unemployment rate is currently only 5,4%; government debt is quite small and makes up only 13% of GDP.

Western experts, of course, such indicators would be considered unacceptable. But ordinary Russians, as it turns out, appreciate the fact that their real (adjusted for inflation) revenues doubled in the period from 1999 to 2008. That is, the situation is not at all such as to enter the barricades and demolish the current regime.

But it is worth knowing and something else. Putin once saw the basis of his legitimacy in economic growth. Now he can no longer ensure a higher standard of living. What does he have left? He adheres to the advice of the imperial Minister Plehwe: "We need a small victorious war." And Putin is going this way: he "won the war in Georgia in 2008, annexed Crimea in 2014 and now continues to intervene in Syria (since September 2015 of the year)."

However, it cannot be said that he has no losses. Putin became involved in the conflict in eastern Ukraine. There he did not become a winner, even a small one. Eastern Ukraine is “a failure in foreign policy, and it shows that Russia, which has military superiority over its neighbors, cannot afford to wage long wars,” the expert notes.

The West plays on this weakness of the Kremlin and crushes Russia with sanctions that bite off about 1% of Russia's GDP each year.

Another threat to Putin’s regime is domestic elites. Aware of this internal threat, Putin has since August 2014 fired one KGB general after another, and at the same time seeks to eliminate potential rivals in power. It is not only generals who are flying: on November 15, the “purge” went in a different direction - Economic Development Minister Alexei Ulyukayev, one of the “liberal technocrats”, was arrested. The day after the detention of Ulyukaev, Putin, Aslund writes enthusiastically, “addressed the Ministry of Defense with a prepared televised address, but the generals on duty looked at him with obvious disgust, and powerful Defense Minister Sergei Shoigu appeared to be absolutely ignored. ”

Putin is politically savvy, the expert notes, and he often hides true intentions. It takes the whole world by surprise, both in military thinking and in diplomatic initiatives (examples: Ukraine and Syria). Yes, he is financially limited, but his position is not hopeless, and "we should always expect surprises from him," the author notes. And now, when Donald Trump won in the USA, which gave rise to a “power vacuum” in Washington, Putin has an excellent opportunity to “improve his internal status.” One can be sure that he is striving to take full advantage of this chance, Aslund sums up.

Another problem, both economic and strategic at the same time, is a high likelihood of increased tension in relations with Turkey. This is a problem of war.

The expert is convinced that Americans today have a “low profile” on Syria. And this “vacuum” in foreign policy will only intensify with the arrival of Mr. Trump in the White House. So there can be big changes in the Middle East. Their initiators will be "local actors."

Here are briefly expert predictions. Egypt will withdraw from the alliance with Saudi Arabia. It will gradually lose its leading position in the Arab world. See an opportunity to expand the influence of Iran. President Assad in Syria no longer feels completely isolated, since Russia wants to strengthen its position in the region. And here is another player: Turkey actively intervenes in the Syrian conflict. Together, this is an "explosive mixture."

The worst thing here is the threat of confrontation between Turkey and Russia. If Erdogan took advantage of the situation and intends to get even with the Kurds and redraw the borders, Putin is unlikely to approve such expansionist plans. Found a scythe on a stone: Erdogan has long wished to overthrow Assad, but Putin supports him.

In this scenario, el-Husseini is waiting for a confrontation between Russia and Turkey "at any moment." The expert is confident that the Russians will not tolerate the expansion of Turkey.

Another prediction: el Husseini doubts that NATO will join in this war and will support the Turks. The West has never danced to the tune of Ankara, and now it will not. Turkey was not attacked, she went on the attack. Erdogan, the expert considers utopian, who imagines himself the creator of the "great Turkish empire" and overestimated himself. With the new war, that fragile minimum of stability in the region, which is still preserved, will be destroyed.

Meanwhile, the Russian theme is still on the agenda of US lawmakers. The US House of Representatives passed a bill on intelligence services in 2017. The document contains a provision on the creation of an interdepartmental commission on "counteracting the latent influence of Russia on foreign states," notes "Lenta.ru".

The committee will include national intelligence officers, the State Department, the FBI, the ministries of defense, finance and energy.

The document was supported by 390 congressmen, all 30 voted against. The bill will now be considered in the senate.

According to a number of foreign experts, Russia observes threats from all sides and even from the inside. With a weak economy, a falling level of investment and a reduction in real incomes of the population, the country is involved in the Syrian conflict, the most dangerous threat in which is not a fight against IG (prohibited in the Russian Federation), but a likely confrontation with Turkey.

Experts do not lose hope for some stability of the Russian economy in the long term, but note the desire of the West to put more and more pressure on the Kremlin with sanctions, and in foreign policy - with propaganda and intelligence community activities.