December 1 2016
10
Robotic complexes for various purposes are of great interest for the military department. First of all, the army needs automated combat systems. In addition, the armed forces need multifunctional robots capable of solving engineering problems. According to recent data, in the near future, the Russian army can get a new type of robotic complexes, the task of which will be the implementation of various works with minimal human participation.


To date, a significant number of projects of engineering robots have been created in our country, but this time it is a specific model. In the near future, the ROIN P-300 complexes, created by the Inter-regional group of companies Intechros, will be able to replenish the fleet of specialized equipment. The current state of affairs and prospects for the original development of 29 in November was reported by the Izvestia edition. Representatives of the company-developer told reporters about existing plans for the launch of mass production of new equipment in the interests of the Ministry of Defense. 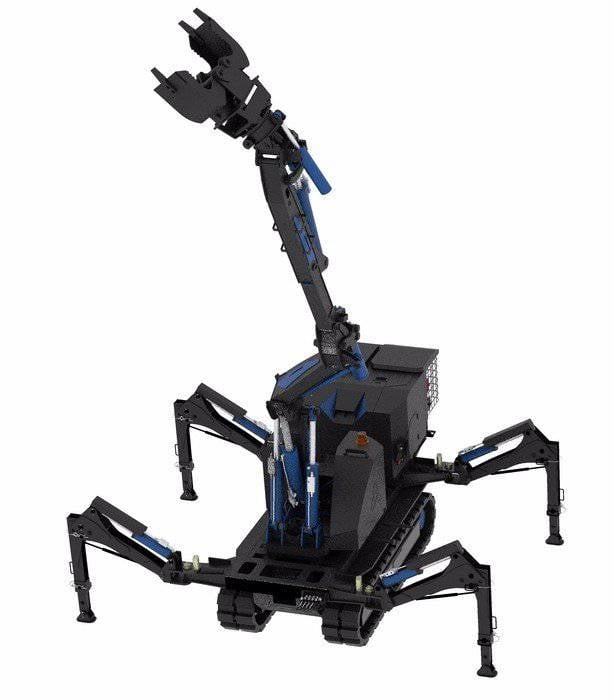 It is reported that the P-300 complex has already passed factory tests, during which it confirmed the design characteristics. This fact allowed the development organization to begin negotiations with the military department, the result of which should be the appearance of an order for the supply of equipment. During the discussions, the Ministry of Defense and Intechros decided to continue joint work. Next year it is supposed to begin deliveries of new robotic complexes. Having received such equipment, engineering troops and other units of the armed forces will be able to more effectively solve some of the arising tasks.

According to the manufacturer, the robot ROIN P-300 is a self-propelled multi-functional platform equipped with a number of special equipment. In addition, various additional tools can be installed on the boom of the machine. The nomenclature of compatible devices and devices includes three hundred products for various purposes. Due to this, the complex can be used to solve a wide range of tasks in difficult conditions without direct human participation.

The base of the P-300 in its basic configuration is a tracked chassis with rubber propulsion belts. Using its own chassis, the robot can move through complex landscapes, entering the work zone. Also, the manufacturer offers other configurations of the complex. Depending on the wishes of the customer, a platform with special equipment can receive a railway chassis or be mounted on a truck with suitable characteristics. According to the latest press reports, the P-300 will be delivered to the Ministry of Defense in a self-propelled tracked version.

A rectangular platform is mounted directly on the chassis chosen by the customer, which serves as the basis for the installation of all other units. In front of the platform, there is a boom slewing device that provides the ability to output special equipment to any direction. The back of the platform is given for installation of the case with various equipment. In particular, the main elements of the hydraulic system are mounted inside this unit: its own internal combustion engine and axial piston pump, which are responsible for creating pressure in the lines. 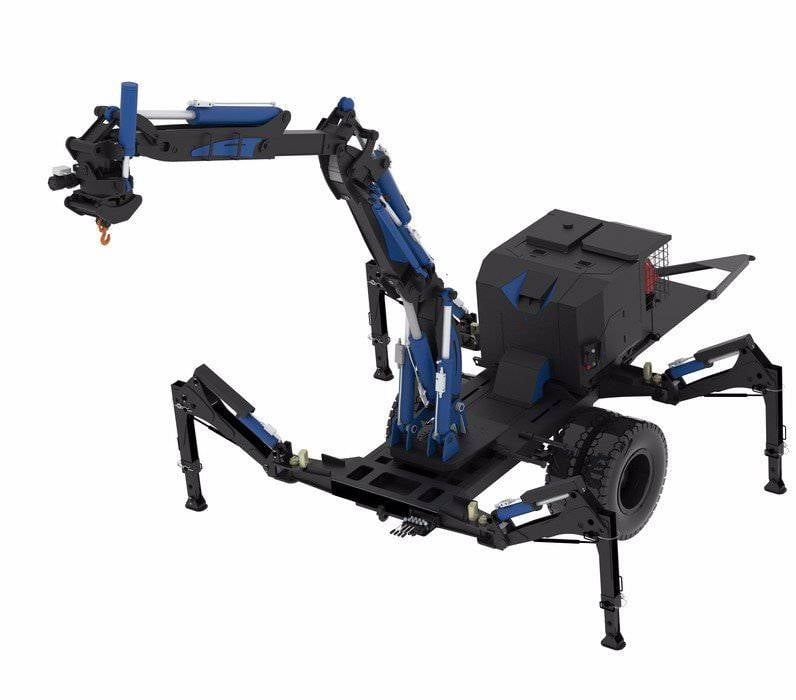 On the sides of the base platform, four outrigger with hydraulic drive, operating on the principle of parallelogram mechanism, are placed. In the working position, the outrigger supports are lowered to the ground, which allows the complex to be hung above the supporting surface. In the transport position, the supports are lifted and retracted by turning around the vertical axis, and then placed next to other units.

For proper placement at the place of work, a robot from the Intechros group of companies is equipped with an automated leveling system. This equipment automatically determines the position of the base platform, and also generates commands for outriggers. Due to this, the machine can be located in the desired position even on terrain with a noticeable slope. Leveling accuracy is determined at 10 angular minutes.

The main “tool” of the ROIN P-300 complex is an arrow of the original design, which has hydraulic drives and is able to use tools for various purposes. The boom is mounted on a U-shaped support, which has the possibility of a circular rotation around the vertical axis. The boom section fixed on the support has the ability to move within a wide sector of the vertical plane, for which the drive in the form of two hydroclonders is used. The design of the boom is designed in such a way that it can interact with objects in both the upper and lower hemispheres.

The boom consists of three sections connected by hinges and equipped with hydraulic actuators. In addition, the third section, which has fastenings for the installation of special equipment, can change its length due to the telescopic structure and the corresponding control mechanisms. The boom design uses several hinges with a large number of degrees of freedom, which makes it possible to bend it in the required manner and even reach hard-to-reach objects, while maintaining full operability. When translated into the transport position, the turntable retracts the boom back to the side of the hull, after which the sections are placed in the most compact position. 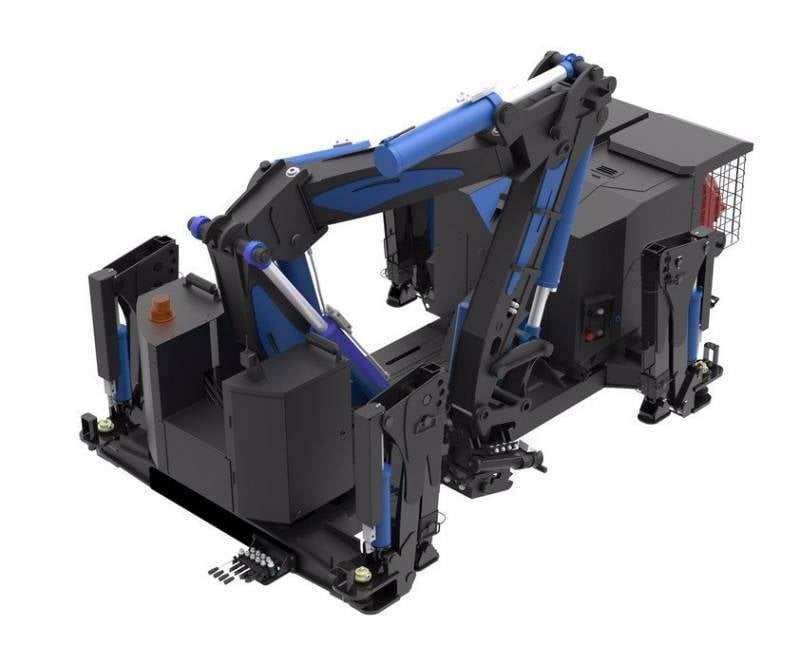 The boom design allows work to reach 5 m, the maximum height of the working body is 6 m. When working in the lower hemisphere, the boom can be lowered to a depth of 3 m. The boom load moment is 5 tm, the load capacity is 3 t. At the maximum boom reach, the last parameter is reduced to 1 t.

To solve specific problems, the boom of the robot P-300 can be equipped with the appropriate special equipment. So, for land works a bucket or a drill with a hydraulic drive can be used, for demolition of structures - a concrete breaker or a hydraulic hammer, for the movement of goods - a hook, etc. It is also possible to install a cradle intended for raising a specialist to the place of work. It takes no more than a few minutes to replace the boom equipment. An important feature of the robotic complex is the ability to replace the working body on commands from the remote control. In this case, the so-called. automatic synchronization of hydraulic equipment eliminates leakage of working fluid.

The main control tool for the ROIN P-300 complex is a remote control with a set of all the necessary tools. There are several control knobs and buttons on the console that are designed to control the operation of all the robot systems. Commands are transmitted to the onboard control systems of the engineering machine via radio or cable. In case of failure of the remote control systems, the project offers a remote control installed directly on the robot. With the help of levers placed on the base platform, the operator can fully control the boom and other devices.

Dimensions allow the P-300 robotic complex to be transported by various vehicles with relevant characteristics. With outrigers and boom harvested, the robot is placed in the back of a truck. The length of the product in the transport position is about 2,5 m, width - 2 m. The mass of the machine is 2,5 t, which makes it possible to use a fairly wide range of “carriers”. In the modification intended for use by railway workers, the platform with all the equipment receives a crew part of the appropriate type, with which it can be towed by rail. 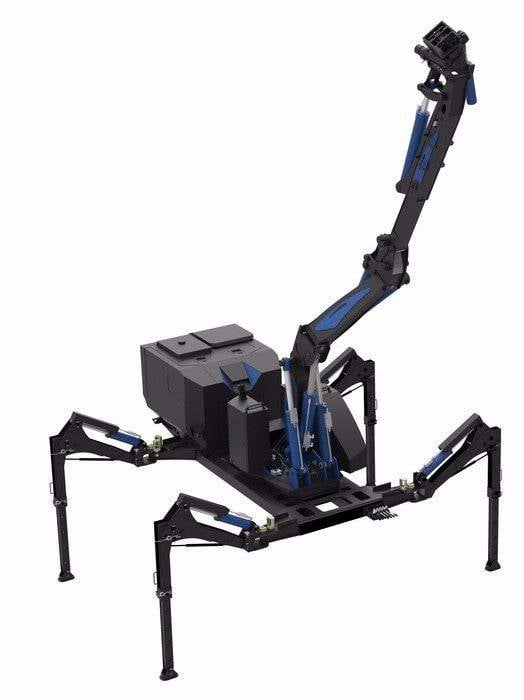 P-300 without chassis and special equipment

Declared the ability to work in a wide range of air temperatures. Thus, the complex must remain operable at a temperature of -50 ° C. This feature of the robot in certain situations can be an additional means of protecting the operator from adverse factors.

The proposed complex ROIN P-300 has a number of positive features. Depending on the version and the carrier used, the complex can be quickly transferred to the place of work on existing roads or railways. The use of universal boom equipment allows the use of a large number of different types of special equipment, up to a hand-held hydraulic tool, thanks to which the robot can solve various tasks. The use of a remote control makes it possible to send the P-300 to the danger zone without putting people at risk.

The development organization claims that its proposed robotic complex can be used for engineering maintenance of various infrastructure facilities in various industries. It is also possible to use such equipment during the construction of various communications, roads, etc. Also, the capabilities of the robot can be useful in the performance of rescue and disaster relief operations. Thus, the P-300 project proposes a universal engineering machine capable of finding application in various fields.

One of the operators of such technology in the foreseeable future could be the Russian Ministry of Defense. After receiving the robotic systems, engineering troops will be able to master new means for loading, construction, earthworks and other works. In addition, versatility allows the use of the complex not only in the construction or maintenance of infrastructure, but also in the neutralization of explosive devices. With the help of an arrow with an appropriate manipulator, the robot operator will be able to perform all the necessary procedures without risking himself. 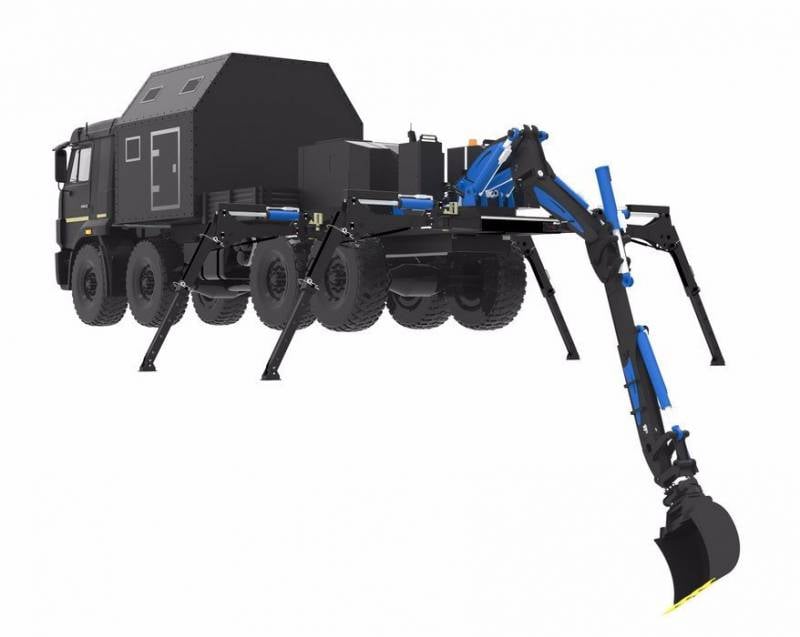 According to known data, a certain number of ROIN P-300 complexes are already being operated by various domestic structures. Thus, there is a contract for the supply of a reduced version of the robot to the Emergency Technical Center of the Ministry of Atomic Energy of Russia. P-300 with railway wheelsets is already being operated by specialists of the Moscow metro. In the near future, the list of operators of such equipment should be replenished by the armed forces.

According to the estimates of the Izvestia publication and experts he polled, the resistance of the P-300 robotic complex to low temperatures can be used to perform various work in the Arctic. At present, the northern regions of the country are being actively mastered by the Ministry of Defense, but their conditions are a serious challenge for specialists of the engineering troops. Obtaining a universal engineering machine capable of operating in various conditions and using a wide range of special equipment can significantly improve the efficiency of the units engaged in the construction and maintenance of facilities.

At the same time, the Ministry of Defense has not yet officially commented on the latest news. For this reason, the possibility of sending ROIN P-300 complexes to the Arctic is still one of the predictions of further developments, which can later be confirmed or refuted. It is possible that the new equipment will receive connections serving in other regions of the country, but also in need of similar machines.

To date, the P-300 complex, intended for the military department, has undergone factory tests, which approximates the moment of possible acceptance for supply. In the near future, specialists of the Ministry of Defense will have to check the new equipment, after which a final decision will be made on a contract for the supply of serial robots. According to the estimates of the producer organization, the first serial ROIN P-300 can be transferred to the army next year.