News of the development of air defense systems: the supply of serial equipment and the beginning of a new project

November 30, 2016
11
The Russian defense industry continues to fulfill existing orders for the supply of military equipment of one purpose or another. In addition, the development of new complexes of various classes. During the past few days, one of the leading industrial enterprises told about their recent successes, and also announced plans for further work. According to these reports, the delivery of another batch of ordered products has recently been completed, and the development of promising technology has also started.


News about the start of work on a new model of military equipment for the future rearmament of the Russian army 28 November reported TASS publication in its publication "Almaz-Antey" began to create a medium-range air defense system of the new generation. " Referring to the press service of the Concern of aerospace defense "Almaz-Antey", TASS cites the words of the general director of this organization, Jan Novikov. The head of the concern announced the fact of the beginning of the development of a new project, but so far he refrained from telling about technical and other details.

According to Y. Novikov, Concern VKO "Almaz-Antey" is not going to stop there. In this regard, the organization's specialists have already begun development work under the new project. The aim of this work is to create promising medium-range anti-aircraft missile systems. New complexes will belong to a new generation of similar systems. Unfortunately, any technical details of the project have not yet been disclosed for reasons of secrecy and early work. 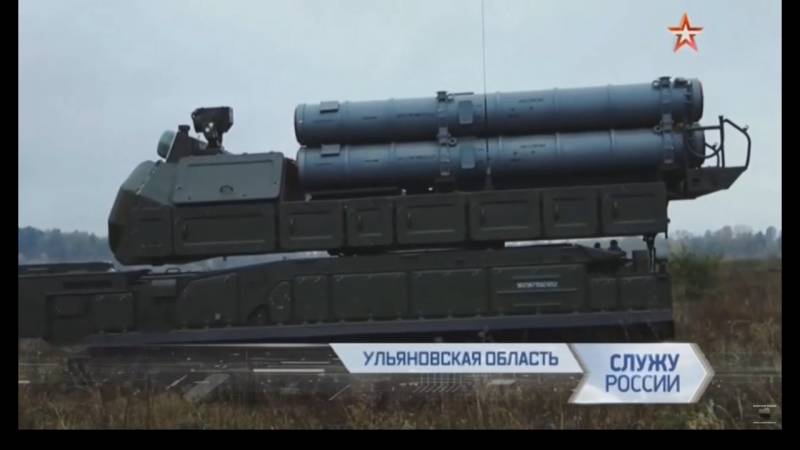 As a medium-range complex, a promising system, the development of which began not so long ago, will belong to the same class as the existing Buk family air defense missile systems, the Vityaz C-350 system and some other domestic developments. Such air defense missiles, capable of hitting targets at ranges from 30 km, are of great interest in the context of the development of object and military air defense. In what area will the prospective complex be found, the creation of which became known recently, has not yet been clarified.

The day before the announcement of the start of development work on a new project, news appeared telling about the progress in fulfilling existing orders. 28 November, the press service of Concern VKO Almaz-Antey announced the first successes in the construction and supply of one of the newest anti-aircraft complexes. Fulfilling the state defense order for 2016, enterprises from the Almaz-Antey concern produced and handed over to the troops the first brigade set of the Buk-M3 system.

To date, the Buk-М3 anti-aircraft missile system has passed all the necessary tests and has been recommended for mass production. Over the past few weeks, the industry has completed the execution of part of the existing order for the supply of serial equipment. October 21 of this year was held a single day of acceptance of weapons and military equipment. During this event, it was announced that the first division of the 9K317М Buk-М3 serial complexes was transferred to the customer in the Ministry of Defense. Also during the Unified Day of Acceptance, the leadership of the military department announced the further transfer of serial equipment. The second division of the newest complexes was to enter the ground forces in November. According to recent reports, by the end of this month this task was completed, as a result of which parts of the air defense of ground forces were able to begin the development of the first brigade set of the latest anti-aircraft system.

Recall, the 9K317М Buk-М3 anti-aircraft missile system is the newest and most advanced representative of its family of vehicles. Project development began in 2007. According to the first reports, the project “Buk-М3” should have been a further development of the complex “Buk-М2”, developed with a wide use of modern element base. Initially it was supposed to complete the development of a new project by the end of the decade, but later the dates for the start of mass production were shifted several times. It was only this year that it was possible to complete all the required work and tests, as well as to launch mass production. Despite all the delays and postponements, the troops had already received a full brigade set of new types of equipment.

According to previously published data, the updated anti-aircraft complex, in general, retains the architecture of previous family development, but a significant number of operating principles and other features have been updated using the available capabilities. The complex includes a command post, a station for detection and target designation, a self-propelled launcher, as well as a transport-launch and transport-charging machines. For the destruction of targets used guided missile 9M317M. The most notable difference in the Buk-М3 complex from its predecessors is the use of transport-launch containers that protect the missiles from external influences.

The division of the 9K317М complex “Buk-М3” incorporates one command post 9С510М and one detection station with radar 9С36М. To defeat targets, it is proposed to use two autonomous launchers 9А317М with six missiles each. As an additional means of attacking detected objects, 9A316М transport launchers that carry 12 missiles can be used. Missiles are transported using 9Т243 transport-charging machines. According to some reports, the brigade kit, the delivery of which ended a few days ago, has two divisions.

All self-propelled anti-aircraft complex built on the basis of tracked chassis. According to available data, as part of the development of a new project, the existing tracked chassis has been modernized, designed to improve the basic characteristics. Thus, in the case of the 9А317М self-propelled launcher, it was possible to increase the payload capacity and improve the crew protection against various threats. Other self-propelled machines from the complex have similar characteristics. Earlier it was reported that upon receipt of the corresponding order, the 9K317М “Buk-М3” complex can be built on a wheeled chassis with the required characteristics.

The main innovation of the Buk-M3 project is the 9М317М guided missile. According to reports, this product is equipped with a solid-fuel engine and control systems, which include inertial guidance tools, as well as an active radar homing head. Declared the possibility of destroying targets at ranges up to 70 km. With the help of a new missile, an anti-aircraft complex can destroy aerodynamic and ballistic targets of various types that pose a threat to ground forces on the march and in congestion sites. Also, some sources mention the possibility of firing ground or surface targets. The probability of hitting the target, depending on its type, reaches 0,95.

Target detection and launch launcher systems of the division allow you to monitor targets at distances up to 70 km and altitudes up to 35 km. There are 36 target channels, which allows the division to repel a massive air attack. The management of the complex and the interaction of its various components is provided by means of modern digital communications. These systems provide voice communication and data transmission, including over an encrypted channel.

To date, the ground forces received the first brigade set of the Buk-М3 air defense system. In the foreseeable future, enterprises from the Concern VKO Almaz-Antey will continue to manufacture new-model complexes, which will be handed over to the troops and gradually supplement and then replace the existing equipment of older types. The program of mass production "Bukov-M3" has already started and has already given the first results.

A few days ago it was announced the start of work on a new project of the medium-range anti-aircraft missile system. For objective reasons, it is known only about the very fact of the existence of a new development work. Any details are not communicated and are unlikely to become known in the foreseeable future. Announced data can only disclose the class of technology and its approximate characteristics. Being a medium-range complex, prospective development will have to hit targets at distances from 30 to 100 or 200 km. Other features of the new project can only be subject to forecasts and discussions, since even the purpose of the complex is unknown.

This year, the leading domestic manufacturer of weapons and military equipment completed part of the required work in one of the projects of promising air defense missile systems. Such successes allowed to start mass production of machines and new types of missiles, some of which had already been transferred to the customer. Completion of some works gave the opportunity to proceed to the other. According to recent reports, now Concern VKO "Almaz-Antey" is engaged in new developmental work. Its successful completion in the future will lead to the beginning of a new rearmament of air defense units.