November 29, 2016
26
Blog chervonec_001 published another summary of the military officer "Mag" about the situation in the Donetsk Republic. 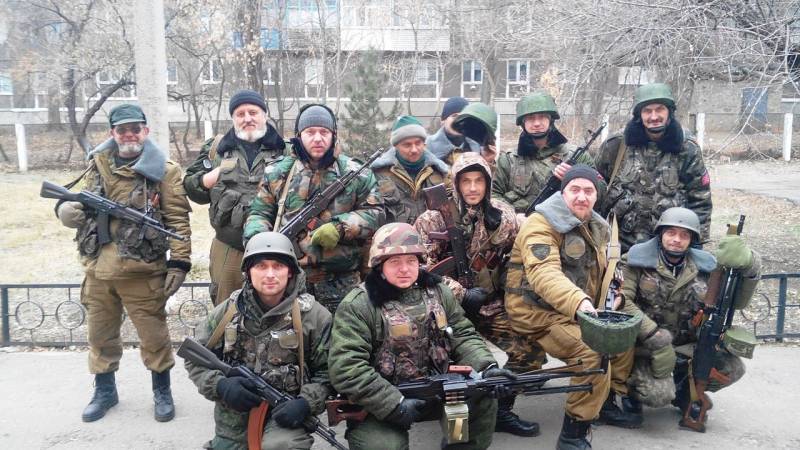 “This week the number of shelling remained at a high level, there were attempts by Ukrainian security officials to seize neutral territories.

21.11.16, monday.
All night and morning short skirmishes and shelling with mines of 120-mm continued. Ten minutes of shelling, after which 30 minutes silence, and so on until noon. 07: 30 appeared a few UAVs over the airport and YaBP. Then in 07: 50 followed by a short mortar raid.

15: 00 began shelling mines with an 120-mm YaBP.
16: 00 in the area of ​​Avdeevskaya promku on the positions of the Armed Forces of Ukraine, firing nuclear warheads, the DNR struck.

It was quiet until late at night. Only snipers and machine guns worked at the main hot sites.

20: 50 APU on the airport-Spartak-YaBP-Gorlovka front line resumed fighting and shelling. On the entire line works small, mortars and equipment.
21: 20 in the area of ​​the YaBP made a salvo of the Armed Forces of Ukraine.

During the first day of the week, we were bombarded 519 times, of them: mines of 82-mm and 120-mm caliber 148 times, 122-mm shells six times, the rest were fired from grenade launchers, equipment and various small-arms weapons.

22.11.16, Tuesday.
07: 05 morning shelling, as scheduled, shelling our positions west of Donetsk. The APU worked with 120-mm mines and 122-mm 07: 10 shells. The APU began to fire mines on the 120-mm village of Yelenovka.
09: 30 heavy shelling in the area of ​​Alexandrovka.
12: 30 for three hours in a row continues to make noise in the area of ​​Aleksandrovka and its surroundings. Armed Forces of Ukraine work in squares.
13: 00 on the southern front from the road Mariupol - Kominternovo ACS APU shelling our positions.
15: 20 in the Avdiivka area took off the BC warehouse. On the radio dill could hear a lot of choice mats interspersed with screams.

It was relatively quiet until late evening. Although skirmishes and shelling by mines periodically occurred on various parts of the front. UAV APU is also active.

22: 10 in the area of ​​Dokuchaevsk periodically break out battles and mortar shelling. The Armed Forces of Ukraine mine our position in the area of ​​Elenovka, Yasnoye and western suburbs of Dokuchaevsk
23: 30 APU from the side of Svetlodarsk work mortars and to / to machine guns with BMP-1.

On the southern front in the Watery area, located in the "gray zone", the enemy, under 20 forces, under the cover of mortar fire, attempted to break into the territory of the Republic, which led to another senseless loss in the ranks of the Armed Forces of Ukraine. During the fire contact, losses from the Ukrainian side amounted to five killed and seven wounded. Losses from the DPR: three soldiers were wounded.

During the day we were shot at 503 times, of which: mines of caliber 82-mm and 120-mm - 157 times, projectiles of caliber 122-mm - 13 times, the rest of the attacks were made from grenade launchers, equipment and various small arms.

23.11.16, Wednesday.
As usual, from seven in the morning and almost the whole day - short skirmishes and shelling by mines. We were warned for several days that the Emergencies Ministry would check the warning system.
14: 00 boomed sirens alert. At this time, followed by three powerful explosions. At first they thought that another depot flew off the APU, but as it turned out later, our sappers destroyed unexploded mines and shells outside the city. Which they collected in places of previous battles. As stated in the Emergencies Ministry, such finds are still enough for 10 years of mine clearance.
15: 50 shelling of the village of Spartak. Ambulances and firefighters called at the request of the residents are already in place.
16: 10 in the area of ​​the YaBP began a strong battle.
17: 50 two hours continues intense battle in the area of ​​promki - YaBP. Mortar duels are also continuing.
17: 50 - 18: 00 on the batteries of the Armed Forces of Ukraine in the area of ​​Avdiivka our artillery began to work.
18: 05 - 18: 15 again our artillery strikes at APU.
19: The 40 APU was activated on the southern front near the village of Shyrokyne. Mortars 120-mm are actively working.
20: The 00 of the Armed Forces of Ukraine are firing 120-mm mines in the village of Elenovka.
21: 20 Petrovsky district of Donetsk under shelling of 120-mm mines and 122-mm shells. Started mortar and artduel.
21: 20 village Staromikhaylovka also under shelling 120-mm min.
22: 00 between the APU batteries in the area of ​​Marinka and our batteries continues the art duel.
22: 20 heavy fighting near the village of Sands. Here, the Armed Forces of Ukraine also use artillery for our positions at the Airport.
22: 35 is a very strong cannonade heard in the Kuibyshev district.
22: 35 all horizon west of Donetsk as the day burns. In the area of ​​Marinka, the batteries of the VSU came under strong retaliation.
23: 00 in the YaBP area a strong battle continues. All types of weapons are used except the MLRS.

Message from the MoD of the DPR: “The Ukrainian army lost 5 people killed and 7 wounded while trying to break through the positions of the DPR forces on the southern front. In the Water area located in the gray zone, the enemy, under the cover of mortar fire, attempted to break through territory of the Republic, which led to another senseless losses in the ranks of the Armed Forces of Ukraine.
During the fire contact, losses from the Ukrainian side amounted to five killed and seven wounded seven soldiers of the Ukrainian Armed Forces. The loss of the DPR army was 3 man injured. "

24.11.16, Thursday.
06: A group of Ukrainian soldiers consisting of up to 00 20 people tried to break through in the area Yasinovatoy and was ambushed. As a result of the collision, the group was destroyed. The number of militias and civilians affected during the battle is being specified.

14: 30 on the southern front from the point of view of the Armed Forces of Ukraine began the battle and mortar shelling of the villages of Sakhanka and Leninskoye. Total flew 20 min.
16: 30 in the area of ​​promka - YaBP began fighting, already familiar to this time. All according to the Ukrainian schedule.
16: 30 residents of Makeyevka heard the arrival of the Grad rocket launchers.
16: 55 positional battles between the village of Sands and the Airport. Periodically, the APU used mortars and art.
17: 00 two and a half hours go positional battles on the southern front.
20: 30 battles and shelling in the area of ​​Dokuchaevsk.
20: 30 Petrovsky district fights and shelling, ours are also responsible. The situation mirror repeats attacks and artduel on Wednesday.

25.11.16, Friday.
00: 00 continues fighting and mortar shelling in the area of ​​Dokuchaevsk. 08: 50 morning positional fighting and shelling along the airport-Spartak-YaBP front line.
14: With short interruptions, 00 continues fighting and mortar shelling along the airport-Spartak-YaBP front line. APU also applies the technique.
19: 10 in the Zaitsevo area in the north of Gorlovka is under heavy bombardment with mines and shells. APU periodically expelled to the hill a tank, which leads a chaotic shelling of residential buildings.
20: 30 on the southern front began a very heavy shelling in the villages of Kominternovo and Sakhanka from the point of view of the Armed Forces of Ukraine near Talakovka.
21: 30 for almost an hour and a half under fire Zaytsevo village. In addition to the tank, the APU drove two more infantry fighting vehicles.
22: 30 two hours continues the shelling of Kominternovo and Sakhanka. Armed Forces of Ukraine are firing from ACS "Gvozdika".
22: 10 Petrovsky district under fire from mines and shells. Our answer.
22: 38 in the area of ​​the YaBP fights subside. Works small and occasionally mortars 82-mm.

The Ukrainian security forces suffered new combat losses due to poor training, the deputy commander of the operational command of the DPR, Eduard Basurin, said at a briefing today.

"A scout from the 3 battalion of the 30 battalion of a separate mechanized brigade of the Ukrainian Armed Forces during reconnaissance in the Novotroitskoye settlement lost its orientation to the terrain due to heavy fog and came to our positions, after which it opened fire on them," he said. According to Basurin owls, during the fire contact, the enemy’s losses were “two killed and three wounded”.

26.11.16, Saturday.
10: 00, an enemy with up to three platoons of personnel, supported by armored vehicles, under cover of fire from mortars of caliber 82-mm and 120-mm, as well as 122-mm artillery from the Shirokino area, attempted to attack our positions near the village of Vodyanoe. During the fire contact, the enemy was stopped and thrown back to the starting positions. The enemy’s losses were five killed and eight wounded. The BTR of the Armed Forces of Ukraine was also shot down.

07: 50 on the southern front began a heavy mortar attack. Under its cover in the direction of our positions, the infantry of the Armed Forces of Ukraine advanced with the support of several infantry fighting vehicles.

Message from the Ministry of Defense of the DPR: “Three soldiers of the Ukrainian army were killed, two were injured while trying to attack the positions of the DPR forces near the village of Kominternovo in the south of the Republic. Ukrainian soldiers in the 15 number of the 21 battalion of the Marine Corps attempted to attack our positions in the Kominternovo region. During the fire contact with the use of small arms, the Ukrainians lost three killed and two wounded. "

All day and until late at night battles and shelling continued on all fronts.

12: 30 shelling 120-mm mortars of the Airport and the northern suburbs of Donetsk.
14: 30 attacks at various calibres of the Airport - Spartak - YaBP continue.
15: 35 under shelling our positions in the area of ​​Dokuchaevsk and further along the front line north to the Petrovsky district of Donetsk. Work mortars, artillery and equipment APU. This day is especially strong.
18: 30 six hours without a break from noon are positional battles and methodical shelling of the northern suburbs of Donetsk and along the front line Airport - Spartak - YaBP - Gorlovka.
20: 30 are positional battles, shelling of Petrovsky district and our positions west of Donetsk.
The fighting and shelling continued without interruption until midnight. I do not remember such battles and shelling from 2015, when the Airport and Debaltseve were released. ”