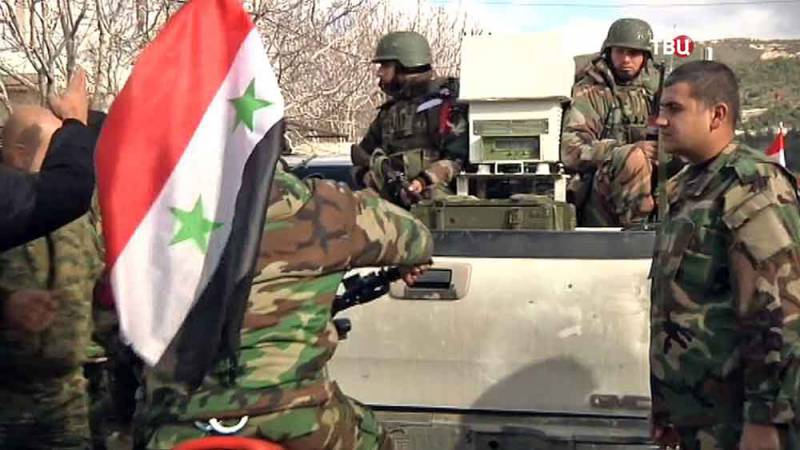 «Work, brothers!"- this famous call of Hero of Russia, Dagestan police officer Magomed Nurbagandov, I want to address our faithful allies on the front today - the soldiers of the Syrian Arab Army, looking at their rapid advance in Aleppo.

Particularly decisively, the offensive of the Syrian patriots in the position of terrorists was after 26 in November one of the key quarters of Aleppo, Masaken Hananu, was liberated from the gangs. Then the soldiers cleared some more districts from the militants - As-Sakhur, Sheikh-Hudr, Sheikh-Fares, Al-Gullek, Haydariya, Bustan Al-Bash, Al-Bayadin and others. The release of Suleiman Al-Khalyabi quarter led to the fact that it became possible to start the water pumping station and turn on the water to civilians who had previously been forced to sit without it.

Since the beginning of the offensive operation, which started on November 22, the fighters have already occupied the 12 quarters. According to the Russian Center for reconciliation of the warring parties in Syria, the army has freed more than 40% of the eastern part of Aleppo from terrorists.

If we talk about the northeast of the city, then it is already completely under the control of the SAR Armed Forces. Even for Russia, the successes of the Syrian fighters were unexpected. Russian President Vladimir Putin discussed the situation at a meeting of the Russian Security Council.

Tens of militants agreed to lay down weapon and surrender to the promise of amnesty. Besides, from the entourage of terrorists managed to leave thousands of civilians. It is the sufferings of ordinary people that the Western powers speculate with might and main, ignoring the fact that the anti-Syrian “opposition” continues to hide behind those residents who did not succeed. The latter remain as the living shield of the militants.

In the areas freed from terrorists sappers work - they eliminate explosive devices “generously” placed by “fighters for democracy in an American way”.

But, besides the brothers on the Syrian front, Russia still has “partners” who wish for a completely different. The operation of the UAR army became so successful that in the West a new tantrum arose. They fear the fire of liberation of the entire city of Aleppo, which will be a very significant and painful blow to the "opposition." For the very anti-Syrian “opposition” in which huge money was invested and on which at some point it was even hoped that it would succeed in destroying independent Syria and its leadership.

British Prime Minister Theresa May said that it is necessary to put pressure on Russia due to the fact that it supports Syria. During a joint press conference with a Polish colleague, Beata Shidlo May, said:We must maintain pressure on Russia, given its growing self-confidence».

German Bundestag was also excited. Two of his deputies - Norbert Rottgen (Christian Democratic Union) and Francis Brantner (Green Party) - in response to the actions of Russia in Syria, demand new sanctions. "There should not be such that those responsible for war crimes fly to Munich or Paris for Christmas sales, while women and children die in Syria"- they publicly proclaimed in a popular statement.

All actions in Aleppo in the West continue to blame Russia, although the latter has long been causing no air strikes in this Syrian province. It is as if the SAR Army does not exist, which is also capable of independent actions to liberate the territory of its own country. Not to mention the fact that there, among our "partners", the concepts of international law and respect for the sovereignty of other states have long been forgotten. There trying to form a completely unrealistic picture of what is happening: as if the "evil" Russia "captures" Aleppo (it is not clear who exactly). Ah, yes, in the opinion of the most disgusting personalities, Syrian President Bashar Al-Assad and the UAR army also capture Aleppo themselves.

As for the United States of America, there the attack of Syrian soldiers caused genuine horror. Despite the fact that the current government is trying to "replay" the results of the recent presidential elections, this already looks like agony. Now the “democrats” fear that Donald Trump will truly fulfill his promises and stop supporting the “moderate opposition” in Syria (the “moderate” that moderately kills the civilian population, unlike the “radical” that kills radically). This would reduce the longstanding efforts of the American "democrats" to nothing.

Therefore, we again hear about the need for a cease-fire, the lifting of the blockade from East Aleppo. Well, the term was invented, as if in Syria there are two cities - Western Aleppo and Eastern Aleppo, while this is the same city.

The American newspaper The Washington Post published material claiming that the United States is trying to agree on stopping the offensive in Aleppo in exchange for the White House, finally, disengaging the "moderate opposition" from the radicals. To this end, Secretary of State John Kerry constantly calls on Russian Foreign Minister Sergei Lavrov. According to the newspaper, this agreement, if it could be concluded, would become a truncated version of the Russian-American agreement that was reached by Lavrov and Kerry in Geneva on September 10.

I want to remind you how that agreement died ingloriously. Just a week after he managed to “give birth in agony”, aviation The US bombed the Syrian army in the province of Deir ez-Zor. This inspired the ranks of ISIS (an organization banned in the Russian Federation). Islamist militants went on the offensive. Washington, mumbling an inarticulate apology, instantly concocted an “information bomb” to divert attention, baldly accusing Russia of bombing a humanitarian convoy.

And this, unfortunately, is the logical outcome of such agreements with obviously dishonest players.