Living history of the fleet, the legendary "Commune" 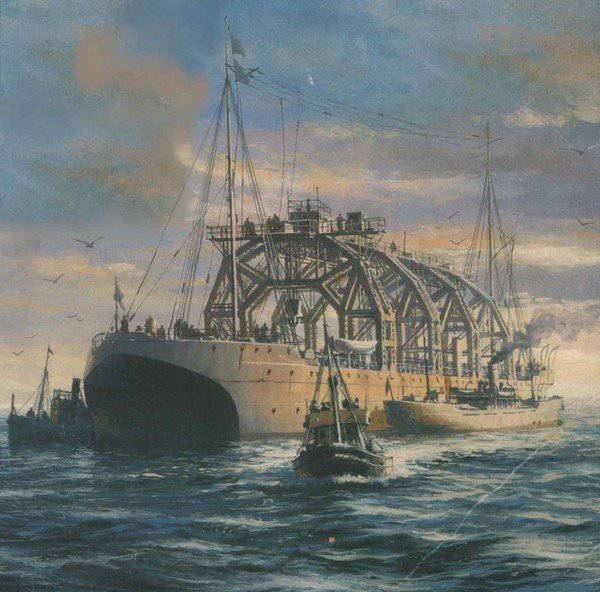 The issues of emergency and rescue work in the warships of warships and submarines were given great importance by Soviet military scientists. In the middle of the 30-ies of XX century, a theory was developed, and then by the end of the decade, devices were invented to rescue the crews of sunken surface ships and submarines

But few people know that the sailors of the Russian, then still royal fleet.

After the failure of the Russian - Japanese military company 1905, humiliated Russia tried to create a groundwork for a future retaliatory strike against the naval forces of the Mikado. The preparations went in all directions, the still bleeding wounds from the losses suffered by the Russian fleet due to the attacks of the Japanese warships were too fresh. Then, in the depths of the tsarist naval department, this project, the creation of a ship saver ship, was born. 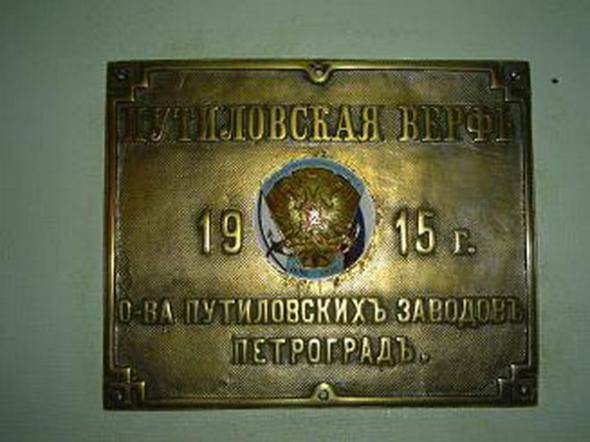 The naval general headquarters seized upon this idea, which found its realization in the project of the engineers of the Putilov factory (1911 year), although there were still some good works submitted to the competition organized by naval sailors. The rescue ship “Volkhov” was laid in November 1912 in St. Petersburg at the Putilov plant, launched in November 1913, and in June 1915 entered the state of the Baltic Fleet, being in the class of transports. Noteworthy is the fact that during the launch of this catamaran ship, Princess Romanova in 1915 broke the champagne on the hull of this vessel.

It should also be noted that in the manufacture of body parts, unique in its ductility and toughness steel was used, the working formula for the production of which has sunk into oblivion. The current conditions of the hull of this ship, assembled in shipyards from Putilov steel, began long before the February Revolution, and now remain combat-ready - the iron structures of much later manufacture, which are installed on the rescuer, are deteriorating. After passing the sea test in July 1914, the St. Andrew's flag was raised on the ship, which meant that the ship was in the battle formation of the submarine division of the Baltic Fleet, where it was used as a swimming base. He was named Volkhov. According to its characteristics, the ship with a displacement of 3100 tons was 96 meters long, 18,57 meters wide, with an 8,40 board height of meters, and the draft was up to 3,65 meters. The hull is of the “catamaran” type, 4 of the main guinea had the power of lifting up to 1000 tons.

The first time the rescue ship was involved in combat crews in the summer of 1917, when in Åland skerries, the submarine AG-15 was raised, which sank in training exercises with an open hatch. The first combat lift of the sunk boat "Unicorn" was held on 24 September 1917, the rescue ship from the depth of the 13,5 meter.

"Volkhov" took part in the revolution and civil war, they say that the deck of this warship was washed in the blood of the royal naval officers who were put to death on board this catamaran. In its daily combat work, the ship continued to serve the ships of the RKKF, only the name was given to another, corresponding to the “Commune”. Already with the updated name, the rescuer took part in extinguishing the fire on the Snake submarine, organized the raising of the Kobchik ship and the boat 4 Krasnoarmeets, which sank under difficult weather conditions.

From the autumn of 1924, after the crew on the rescue ship was increased to 110 people, and before the start of the Finnish company, the ship was engaged in daily combat work, assisting surface and underwater vessels that had accidents and disasters. The results of their labor military everyday life include the rise of the British submarine L-55. The submarine was raised from a depth of more than 60 meters in a stepped manner. In the future, there were emergency rescue operations, such as raising a sunken sea boat border guard and tugboat CP-7, providing testing of new submarines and carrying out repair work on the ships of the Baltic Fleet. Closer to the beginning of the Finnish war, the Kommuna raised from the bottom sunken submarines Bolshevik, M-90, a launch-torpedo boat and a fighter that had fallen into the water. 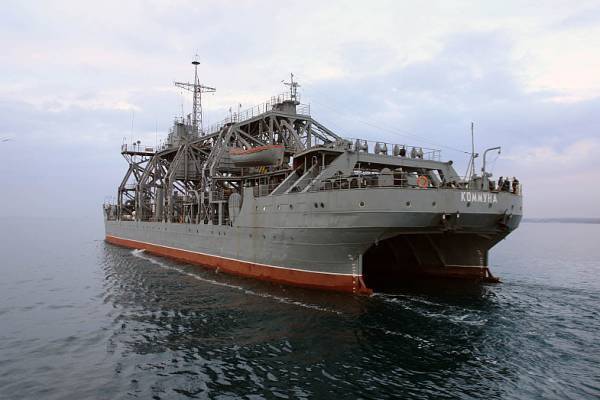 Since the beginning of World War II, the Kommuna relocated to Kronstadt, and since March 1942, the 32 divers from the rescue ship have been serving the Life Road on Ladoga, lifting sunken cargoes, cars and military equipment. In total, during the war years, a lifeguard raised more than 100 sunken objects of the Navy and 300 objects from the national economy. All members of the crew of the ship - worker were awarded various government awards, all received the medal "For the Defense of Leningrad".

After the end of hostilities, the ship was engaged in repair and restoration work, only in 1954, a veteran of the Navy was able to embark on a “kapitalku”, during which the Dutch diesel units were supplied instead of the old German ones, which honestly worked.
1967 year was marked by the transfer of the rescue ship to the Black Sea Fleet, where the rescuer got its way, rounding the whole of Europe.

At the Sevastopol Marine Plant, the vessel was re-equipped into a carrier ship for studying the ocean depths, while at the same time it was given the functions of an emergency rescue vessel for lifting submarines and in 1973, the conversion was completed.

The Kommuna could have been equipped with ISAs (small rescue vehicles) that worked at depths from 500 meters, with the possibility of rescuing crews from 16 to 20 people.

The rescuer was equipped with over-standard equipment, which included two deep-sea search apparatuses of the Search-2 type operating at depths of more than 2 kilometers. In 1979, the rescuer was put up for the next repair at the Sevmorzavod, and in 1984, the Commune was removed from the USSR Navy as a warship for subsequent transfer to the USSR Academy of Sciences. But scientists refused to take the ship to the balance, and it was left to live out its age in the composition of the USSR Navy.

Ctrl Enter
Noticed a mistake Highlight text and press. Ctrl + Enter
We are
112 years ago the cruiser Varyag was launched17 July. Birthday of naval aviation of the Russian Navy
15 comments
Information
Dear reader, to leave comments on the publication, you must to register.