November 28, 2016
66
The project of a completely enclosed car with anti-ballistic armor was developed by BMM back in August-September 1943. The weapons control of the self-propelled guns was not interested. But the bomber command “interested” aviation allies who “for the promotion” of this machine simply bombed in the autumn of 1943 the workshop of the main supplier of assault guns of the company “Alkett”.


If in October 1943, the plant delivered the Wehrmacht a record number of StuG III assault guns (Sd.Kfz. 142 / 1), 255 machines, after the raid, in November - the entire 23 self-propelled unit. And on January 1944, another plaque brought additional problems.

“Alkett” reached the previous level only in May 1944. Against the backdrop of all these events, a report on the production of assault guns was presented in Berlin on December 6, 1943. The StuG III was clearly not enough, and the Pz IV chassis used for the Stug IV was much more needed for the actual production tanks! Prior to this, back in November 1943, BMM received an official order to complete the development of a “new type of assault guns” (Sturmgeschutz nA or StuG nA). The term of work is 1 month. But the final version was approved only on January 27, 1944. 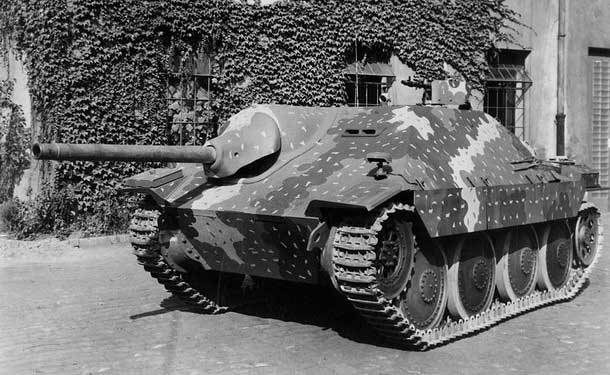 The experience of creating the anti-tank installation "Marder" and SAU "Grille" has shown that the groundwork for modernization and improvement is considerable.

The terms of reference included the self-propelled gun 75-mm anti-tank gun PaK 39 L / 48 with a barrel length 48 caliber and 41 ammunition shot. The barrel was not equipped with a muzzle brake.

The required speed on the highway is 50-60 km / h. Reservations forehead and mask guns 60 mm; The thickness of the armor of the sides, stern and bottom and roof was 10-20 mm to save weight. The body is welded, in its form, the influence of the Jagdpanzer IV ACS, recently launched into a series, was guessed.

Directly the development was led by the founder of the Czech tank school, the chief designer of VMM, Alexander Surin (we mentioned it in the first article). Surin himself was by no means eager to work intensively for the good of Germany, and most of the time he tried to spend outside the CB, simulating a serious illness. 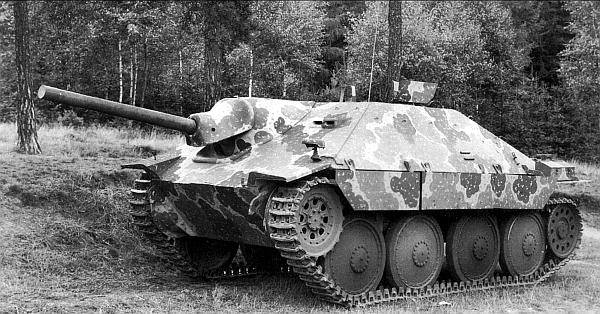 Even before the end of the tests, ACS was adopted under the abbreviation Sturmgeschutz nA, but at the initiative of G. Guderian the car was returned to the arms of the tank crew, and it received the designation Panzerjager fur 7,5 cm PaK 39 L / 48, and from 11 September 1944 of the year Jagdpanzer 38 () with the through designation Sd.Kfz. 138 / 2.

Often applied to the ACS name "Hetzer", according to Alexei Kalinin, self-propelled gun never wore. This is not confirmed by both German and Soviet documents (trophy of course).

It is believed that the German soldiers themselves called the “Hetzer” a car, but at the front, the German name of one of the breeds of greyhounds sounded like that. One of the significant drawbacks of the self-propelled gun was the weapon shifted to the starboard, which disrupted alignment. But despite this in the battles the car showed itself well.

To accelerate the mass production of ACS, the Germans decided to connect the company "Skoda" from Plzen. Only two firms (Škoda and BMM) until the end of the war released the order of 2827 (numbers are not exact) SAU Jagdpanzer 38 (t).

The cost of one installation was determined in 54 000 Reichsmarks - about half of the cost of the German self-propelled gun Jagdpanzer IV.

The first 23 serial machines were assembled in April 1944 of the year. By order of Hitler on July 19 1944, the release of tank destroyers Jagdpanzer-38 (t) assigned the highest priority. 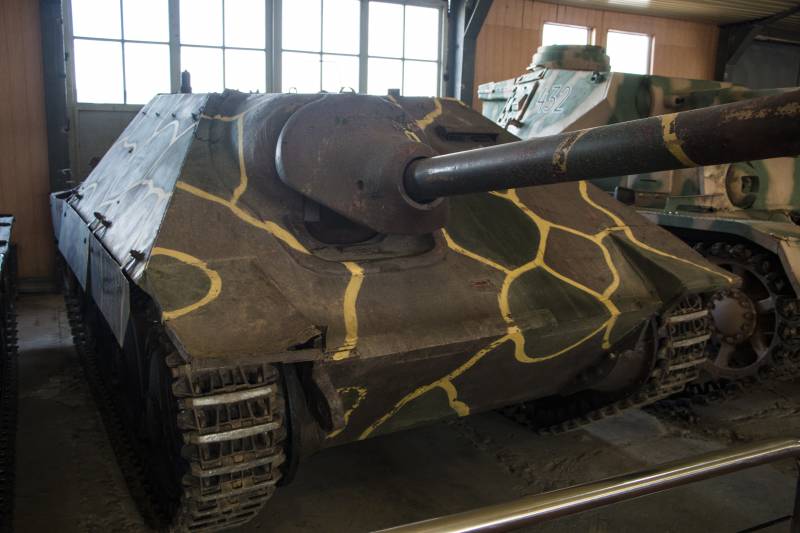 October 4 The so-called “crisis” tank production program was adopted on 1944. The main goal is to reduce the range of manufactured armored vehicles and weapons, as well as the possible reduction in price of manufactured products. It was decided to leave the production of three types of machines: tanks "Panther" and the Royal Tiger, and SAU Jagdpanzer-38 (t) ausf. D (Deutschland - the car was supposed to be produced in Germany).

Release of the chassis Pz. III and Pz. IV was planned to stop. And all the production capacity to put on the above three machines.

In the army, new tank destroyers began to arrive in the middle of summer 1944. The first 45 SAU received the 731-nd separate anti-tank battalion (Panzer Jager Abteilung), the second part was the 743-nd separate anti-tank battalion. According to the state in the battalion there were three companies on the 14 machines, one more was assigned to the battalion headquarters. There should also have been four Bergepanzer-38 BREMs, but there is reason to believe that the units received them with a big delay. Machines of the battalion headquarters and company headquarters were equipped with two radio stations — the standard Fu-5 and the more powerful Fu-8. 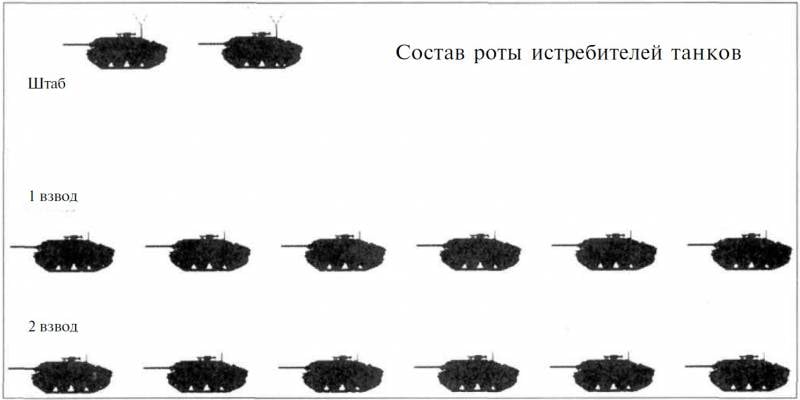 It is known that self-propelled guns appeared in Warsaw to suppress the uprising. But as is often the case, a typical and old as the world error has occurred: the underestimation of the enemy.

Self-propelled units were used without infantry support, thanks to which the rebels managed to set fire with the help of the Molotov cocktail at least one car, and another one to capture. Trophy tank destroyer took part in the battles on the side of the rebels from August 14.

The most amazing thing is that this car survived during the war and was later exhibited in the exposition of the Warsaw Military Museum. But in the end was put on scrap.

The 731 battalion destroyed hundreds of tanks, vehicles and guns before the end of the war. In November, the 1944 of the year receives a replenishment - 10 machines, in December another 20.

At the beginning of April, the 1945 of the battalion company supported the defense of the German divisions surrounded on the Kurland Peninsula; On 5, April, there were 27 tank destroyers in the battalion, of which only four vehicles were operational. Losses were significant enough. For example, the above-mentioned 743 Battalion received an 31 machine to compensate for losses only in February of the year 1945. 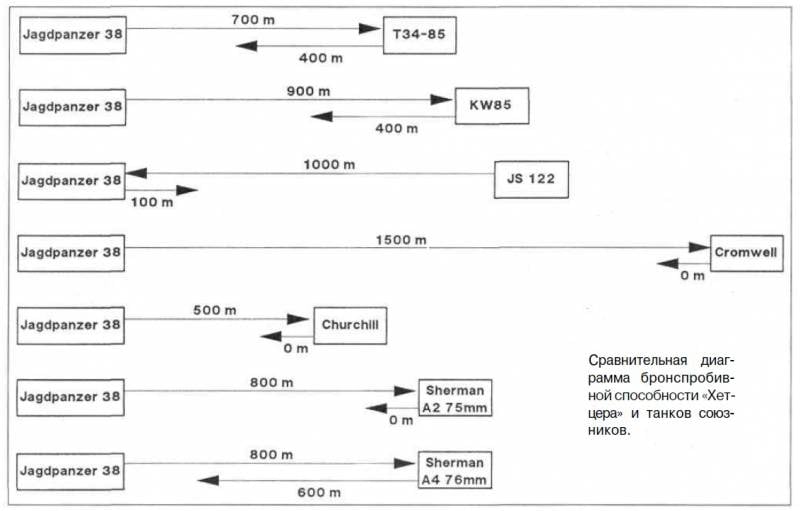 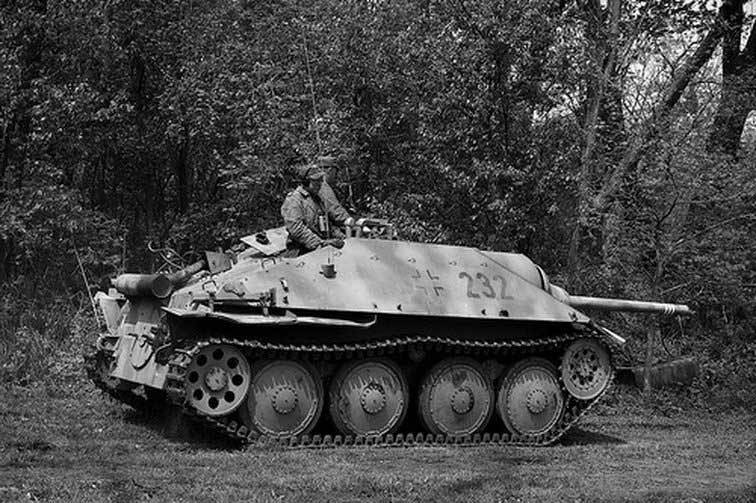 After increasing the production of ACS, the Germans had the opportunity to form a company of tank destroyers as part of infantry divisions. The 14-th, 15-i and 76-i divisions on the Eastern Front were the first in the 335-tank company. By mid-autumn, the supply of cars began to grow. Training companies were formed, one each on the Western and Eastern fronts.

Hungary received from the Germans 50 SAU to replenish their parts. In February, 1945 showed serious signs of disintegration of the German military industry - various improvised units and subunits received self-propelled guns from 277 factories. In order to equip as many companies as possible, the staffing number of ACS in a company has been reduced from 14 to 10.

In April, 1945 on the front and in the rear came chaos, and yet the factories of the firms BMM and Skoda managed to produce more 200 machines.

The last unit to receive the “Jagdpanzer 38 (t)” was the 85 Infantry Division.

Parts of Pancerwaffe and SS tank units were assigned units of Jagdpanzer IV fighter jets, which had better weapons than Jagdpanzer-38 (t) and thicker armor. 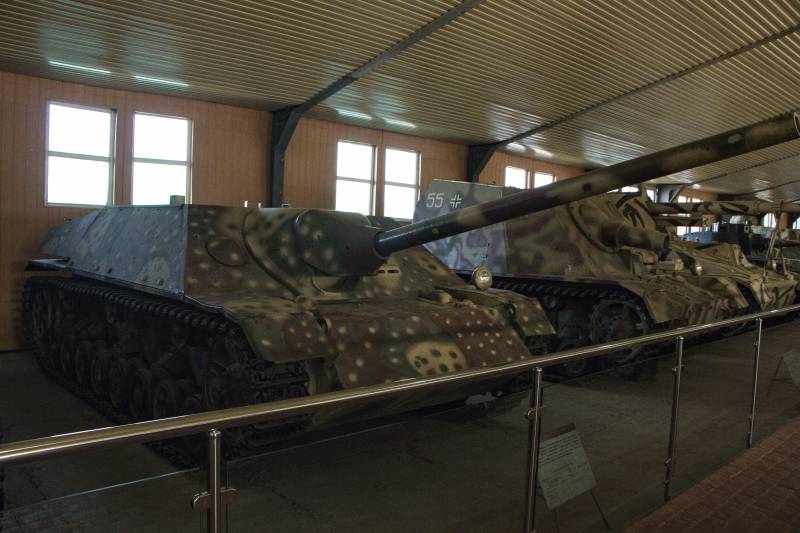 But the release of these machines in reality could not cover the requirements of the army, so sometimes their place was occupied by the ACS Jagdpanzer-38 (t).

For example, the 10 Panzer Grenadier Division Reichsfuhrer SS in September 1944 received 10 tank destroyers, another 25 - in December and four - at the beginning of 1945. In January 1945, the division was redeployed to Hungary to repel the offensive of the Red Army.

One of the most powerful connections equipped with Jagdpanzer-38 (t) installations was the 104-I tank fighter squad (104 Panzer Jagd Brigade).

It consisted of six battalions of two company staff. To form this unit, in January 1945 of that year, the Germans resorted to the most reliable and proven method: they simply took and took the vehicles from the infantry and Volksgrenadier units. But still not enough at all. And the 1 Brigade Battalion received Sturmgeschutz IV assault guns.

According to the information available, the brigade operated in the area of ​​the offensive of the 2 of the Byelorussian Front, in the Army Group "Wisla" from February 1945.

It was supposed to use it as a single fist, but the realities were much more prosaic, the Germans had to crush the brigade, and use for patching holes in the front line. 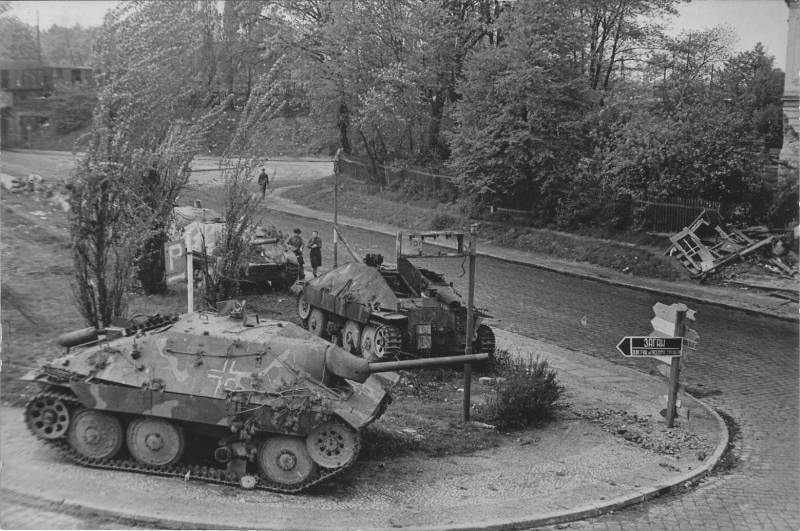 In addition to the above subdivisions and self-propelled parts naturally used by other parts, especially considering the number of cars produced. But to mention all of them does not make sense. It is worth noting that despite all its shortcomings, the ACS turned out to be quite good. The car continued to be used for some time after the war. It differed manufacturability, the chassis itself was familiar to technicians and mechanics, as well as drivers. Therefore, it was not necessary to retrain hundreds and thousands of soldiers and technical staff. And the machine, of course, played its role in deterring the offensive of the Red Army on the Eastern Front. And thank God, we failed to fulfill the plan for more mass production (it was planned to build 11 000 units).

This is the end of such a long story about the Czech LT38 tank and its variations.

Indeed, the car was very successful, just fell into the wrong hands.