November 26, 2016
94
To a large extent precisely on navy holds all the military power of the United States. Possible reductions in the defense budget will affect this type of aircraft to the least extent.


In organizational terms, the US Navy is divided into the command of the Navy (formerly the Atlantic Fleet), the Pacific Fleet, and the command of shipping. The latter does not include warships, therefore it is not considered here.

In addition, the US Navy has a 10-th operational fleet responsible for waging cyber warfare. There are no warships in it.

The naval component of the US strategic nuclear forces includes the Ohio type 14 (6 on AF, 8 on Pacific Fleet). Each carries a 24 SLBM Trident 2, all in all approximately 400.

Another 4 SSBN type "Ohio" under the START-1 contract converted into SSGN (for 2 on AF and TOF). 22 mines for Tomahawk SLCMs (7 SLCMs each) and 2 gateway for combat swimmers are installed on each of them. Accordingly, each SSGNC carries over 154 SLCMs.

By the number of multipurpose PLA US Navy occupy the first place in the world. The most advanced of them are 3 submarines of the type “Sea Wolf” (all of them are part of the Pacific Fleet), but because of the very high price, the construction of the remaining submarines of this type (they were supposed to have 32) was canceled. Instead, at present, Virginia-type submarines are being built with lowered performance characteristics, but cheaper ones. In total, they are planned to be built from 30 to 40. Currently in the US Navy 13, the Virginia-type PLA (9 on AF, 4 on Pacific Fleet). In addition, as part of the Navy, the Los Angeles 39 submarines (16 on AF, 23 on Pacific Fleet) remain, which are gradually being written off. The Los Angeles 16 submarines are still in the sludge, but their return to service is excluded because nuclear reactors are cut out of the buildings.

All American multipurpose SSNs can launch not only ordinary torpedoes, but also Garpun and Tomahawk SLCM through their torpedo tubes. In addition, all Virginia and Los Angeles submarines of the type Los Angeles have 30 vertical mines for Tomahawks.

The symbol of the US Navy and the basis of combat power - aircraft carriers. Today in the 10 system are nuclear powered ships of the type “Nimitz”, according to 5 at AF and TOF (for more details, “Battle of aircraft carriers”, “MIC”, No. 16, 2016). Forged 2 aircraft carrier type "Ford". In fact, this is a significantly improved version of the Nimitz. In total, it is planned to build at least 3 ships of this type. In the sediment 3 aircraft carrier with the usual EU: "John Kennedy", "Kitty Hawk", "Independence."

Until the middle of the 80-x cruisers, destroyers and frigates of the US Navy were essentially aircraft carrier guards, not playing an independent role. The situation has changed with the adoption of the universal Aidzhis CIU, which provides simultaneous tracking and hitting targets at long ranges on land, in the air and at sea. The most important addition to this system is the Mk41 UVP, which has 29 or 61 (in the latest versions - 32 / 64) a cell, in each of which either “Tomahawk” or “Standard” or “Asrok” PLUR can be placed. Cruisers and destroyers with the Aegis system and the Mk41 air defense system were able to deliver massive strikes against coastal targets, carry out air defense and missile defense systems of ship formations and even in some cases of groups of troops on land. Due to this, former guards can complement and sometimes replace aircraft carriers as the main striking force. 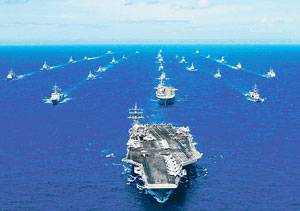 Today, the US Navy 22 has a Ticonderoga type cruiser (10 on AF, 12 on TOF), each of which is equipped with the Aegis system and has an 2 41 unit in each 61 system. Thus, each cruiser carries 122 missiles of three classes. On 5 cruisers (2 on AF, 3 on Pacific Fleet) the Aegis system has been upgraded to solve missile defense tasks. There are still 3 Ticonderogs of the first modification

Destroyers of the Zamvolt type of futuristic appearance and with a significant number of technical innovations are being built in the USA. Each such destroyer can carry 1 DPS on 80 missiles. It was originally intended to build an 32 destroyer of the Zamvol type, but due to the very high price they would be all 3. The first has already been commissioned, the second is being tested.

Oliver Perry type frigates with sufficiently large sizes have very weak weapons and are considered the most unsuccessful ships of the US Navy for the entire post-war period. history. Therefore, they were quickly withdrawn from the Navy. Now in the ranks of the frigates of this type there, in the sediment 30 ships, they are supposed to be sold or disposed of as possible.

Corvettes are the most common class of warships in the world, but they were absent for a long time as part of the US Navy. Only in this century began the construction of "coastal warships." For the Navy, two projects were proposed: Freedom and Independence. The command could not make a choice, so they began to build both. Now in the fleet of the 3 corvette "Freedom" and "Independence" (all on the Pacific Fleet). Note that those and others have a very high price with a rather weak weaponry.

The minesweepers in the US Navy are represented by 13 ships of the type "Ewendzher" (all on the Pacific Fleet).

The landing forces of the US Navy, the largest in the world, are comparable in capacity to the other fleets combined. Now the fleet includes 1 newest UDC of the type “America” (on the Pacific Fleet) and 8 UDC “Uosp” (on 4 on the AF and Pacific Fleet). In the sediment 3 ship type "Tarawa." Further construction of UDC “America”, which are fully-fledged aircraft carriers in size, is underway. DVKD (amphibious assault ship docks) are represented by 9 by the ships "San Antonio" (4 on AF, 5 on Pacific Fleet) and one Austin (on AF). The reserve still 6 DVKD type "Austin". There is a 8 DTD (amphibious assault dock) "Whidbey Island" and 4 "Harpers Ferry" (in 4 and 2 on AF and TOF).

Despite the large number and considerable amphibious assault capability, ships can transfer at the same time only a small part of the marines and the more so the US Army. Therefore, for massive transfer of troops and equipment to remote theaters, the American command charters civilian cargo ships from commercial shipping companies.

A significant number of naval aviation vehicles are in storage at the Davis-Montan base (repair and restoration group of aviation and space technology - AMARG), from which many of them can be returned to service.

The main combat aircraft of naval aviation - F / A-18 "Hornet". Machines of modifications A, B and C are gradually transferred to AMARG, while E and F continue to enter service. F / A-18E / F is significantly improved compared to the original version (and therefore is called the “Super Hornet”). Now in service with US naval aviation 1087 F / A-18.

The second-largest naval aviation is the AV-8 "Harrier." This aircraft with vertical takeoff and landing, is in service only in the Marine Corps. It was produced in the United States under a British license, but then underwent purely American modernization. Now in service with the 128 "Harrier": 33 AV-8В, 79 В +, 16 training and combat TAV-8В. On the AMARG is the 1 TAV-8A, as well as the 58 English “Harriers”, which the United Kingdom sold to the USA in 2011 for parts.

All "Harriers" and F / A-18A / B / C / D are supposed to be replaced by the fifth-generation fighter F-35. It is planned to purchase X-NUMX decked F-260C for the fleet, and for the Marine Corps-35 similar F-80C and 35 short-take-off and vertical-landing F-340В aircraft. So far, this program is developing with a large backlog of schedule and with an even more significant excess of the original price. Marines received 35 F-51В and 35 F-5С, fleet - 35 F-22C.

In the US naval aviation, as in the Air Force, there are squadrons, “aggressors,” imitating the actions of probable opponents in the exercises. Armed with these squadrons are "land" fighters F-16 and F-5. There are 14 F-16 (10 A, 4 B) built for the Pakistan Air Force, but left in the United States because of the temporary embargo imposed on this country by Washington after the 1998 nuclear test of the year. In addition, the “aggressors” imitate up to 46 F-5.

The most modern anti-submarine aircraft of the United States Naval Aviation are the Poseidon Р-8А, based on the Boeing-737. They were adopted by 43 (1 is still in storage), it is planned to build 117. They will replace the famous Orion P-3. Currently in the US Navy aviation remains the 95 P-3C, on the AMARG still 95. Deck anti-submarine S-3 "Viking" removed from service, the replacement of it has not been created.

The E-2 “Hokai” remains the DRLO deck aircraft. In service with their 77.

The USA has the only carrier-based transport aircraft C-2А in the world in its class, which is used to transport people and cargo from the ground to aircraft carriers and back. Their 35.

MV-22V Osprey convertible planes can be based both on aerodromes and on aircraft carriers and UDC. In service with 258 such machines.

On the basis of the C-130 “Hercules” aircraft, the KS-130 tankers were created. Now in the ranks of 77 such machines.

Combat helicopters AN-1 "Cobra" are in service only in the Marine Corps. Now their 175 (123 W, 52 Z). The number of AH-1Z will increase as the production of new machines, and through the conversion of AH-1W.

As an anti-submarine used modification of the "Black Hawk" SH-60F. Such helicopters remained in the 12 ranks.

Transport helicopters in the US naval aviation should be largely replaced by tweeterplanes. So far, however, a significant number of them remain in service.

Marines are actively used in all conflicts involving the United States. The level of its combat training is higher than in the ground forces. Marines include 4 divisions, 2 on AF and TOF.

The Navy SSR is an integral part of the command of the USA SSF and at the same time a separate branch of the Navy. Include 4 group MTR - actually the Navy and MTR of the Marine Corps.

In the foreseeable future, the US fleet will retain its dominant position in most oceanic theaters, with the exception of the seas adjacent to the coasts of Russia and China.