On the centenary of designer Nikolai Mikhailovich Afanasyev

November 25, 2016
9
14 November 2016 would have turned 100 years to outstanding Soviet gunsmith designer Nikolai Mikhailovich Afanasyev, Hero of Socialist Labor, USSR State Prize Winner and Honored Inventor of the RSFSR, Honorary Citizen of Tula. His life and work is inextricably linked with Tula, with TsKIB SOO and the famous Instrument Engineering Design Bureau (PSC), where it is structurally included. In total, he developed several dozen samples of small arms and airborne cannon weapons, most of which were mass-produced and consisted or continue to be in service with many countries of the world.


Nikolai Mikhailovich was born 14 November 1916, in Petrograd. The childhood of the future designer was held in the small village of Goritsy, located in the Kalinin region. In 1934, he successfully completed the seven-year plan, and in 1938, he graduated from the College of Agricultural Mechanization, located in Torzhok. In 1939, a young man was drafted into the army.

The future designer began his service in tank troops in the Far East (in Mongolia), she radically changed his whole life. Having once visited a military airfield, he was able to get acquainted with the weapons of Japanese and Soviet aircraft. Already in 1940, Sergeant Afanasyev developed his own project of an aviation double-barreled machine gun, which was distinguished by automation that was quite original for those years: rollback under the influence of the recoil of one barrel made it possible to reload the second and vice versa. Thanks to this, the rate of fire of the installation reached 4 thousand rounds per minute. A very great influence on the formation of the designer and his further work had the books of the founders of the Soviet armory schools of A. A. Blagonravov and V. G. Fedorov, which were in the library of the regiment in which Afanasyev served. 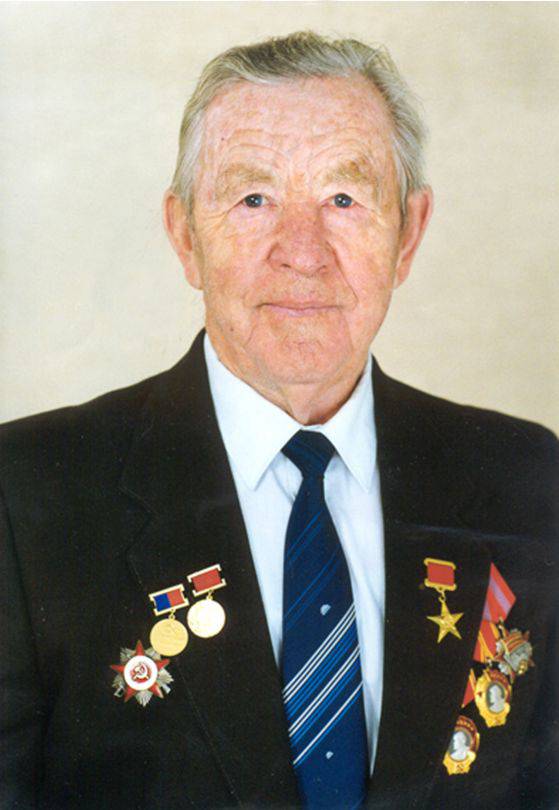 At the initiative of the command of the unit, information on the development of Sergeant Afanasyev and drawings were transferred to Commander G.K. Zhukov, who sent the future designer to Ulan Bator, where he was allocated a room at the army headquarters and was fully assisted. For two months he worked here to complete his project. It is worth noting that this case was not the only one. Zhukov did quite a lot for the development of Soviet weapons and the formation of many talented designers, providing them with all possible assistance. After completing the work, Nikolai Mikhailovich sent his project to Moscow, where he became interested in the work of a talented nugget. Soon Afanasyev was transferred for further service to the Scientific Testing Range of Small Arms of the Tula Central Design Bureau No. 14 (TsKB-14).

At the beginning of the Great Patriotic War, a consolidated military unit was formed from units of this range, which included Afanasyev from October to December 1941, took part in the Tula defensive and Tula offensive operations during the battle for Moscow. In particular, he participated in the defense of Ryazan and the liberation of the city of Mikhailov in the Ryazan region. Then a valuable specialist was recalled from the front and sent to the Central Clinical Hospital, which at that time continued to work in the evacuation. In February, 1943, he returned for further service at the Scientific Test Ground for Small Arms in Tula.

In the design office of the landfill, he worked 5 for years, here Nikolai Mikhailovich worked together with other well-known Soviet designers MT Kalashnikov and L. I. Sudayev. During this period, Afanasyev managed to win the competition for the development of a “double loader” fuse for 82-mm and 120-mm mortars. His fuse was distinguished by simplicity of design, operation and high reliability in operation. In 1943, the device was put into serial production and was installed on all serial Soviet mortars without fail. This device during the war years saved many soldiers' lives and was created for the first time in Soviet practice, becoming the first serious development that brought fame to the designer. In the second half of 1944, the allies of the USSR in the war with Germany - the Americans - through the USSR Commissariat of Foreign Affairs expressed a desire to acquire a license to issue a fuse against double-loading mortars, but they were refused, the resolution on refusal was signed by Stalin personally.

In 1945, Afanasyev was demobilized from the army. Then he began working as an engineer at the B. I. Shavyrin (Kolomna) mortar armament design bureau. From 1946, he worked as a designer at the Scientific Test Site of small arms and mortar weapons in the Tula region. From 1948, he returned to work at TsKB-14 in the city of Tula, being a senior design engineer.

In the postwar years, he returned to his very first development, began to work on the creation of aviation small arms. At the same time, he approached the development, having gained extensive industrial and design experience. The result of several years of hard work was the creation of the 12,7-mm aviation machine gun, which received the designation A-12,7. Nikolai Mikhailovich used in it a constructive scheme of automatic gas-type with a shock accelerating mechanism and clip locking. The new scheme of automation allowed 1,5 to increase the rate of firing in times without increasing the speed of the leading link of automation and high reliability of the machine gun. Later in the CDC-14 was created according to the proposed scheme 11 products, most of which was adopted.

This scheme has become a very important stage in the development of domestic automatic vapor-type weapons. This first independently developed model of small arms by Afanasyev turned out to be very successful. The machine gun A-12,7 in 1953 was adopted and serially produced 30 years - up to 1983 year. It was installed on dozens of types of Soviet combat helicopters, starting with the Mi-4, as well as on MiG fighter jets (training MiG-XNUMHUTI and MiG-15U), as well as a number of light combat aircraft. 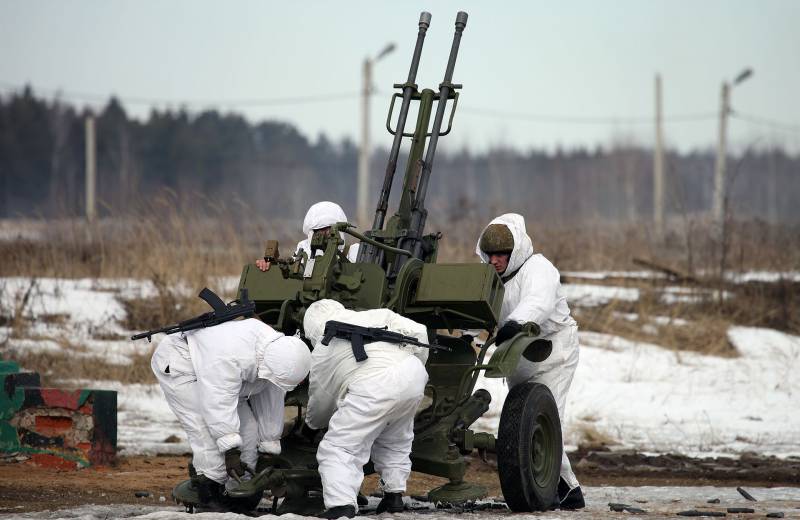 In the 1954, the X-NUMX-mm AM-23 aircraft gun designed by Afanasyev-Makarov was adopted for armament; its rate of fire was 23-1250 per minute. This gun was installed on various aircraft: Tu-1350, Tu-16, M-95, M-3, An-4, An-8B, Be-12, Be-6. In the joint development of two talented Soviet designers for the first time the issues of increasing the rate of fire and ensuring the survivability of the barrel of the weapon in the “gun-cartridge” complex were solved. Especially for the AM-8 aviation gun, a cartridge was used in which gunpowder with special additives was used to slow down barrel wear, increasing its survivability.

In 1960, TsKB-14 was disbanded, most of its employees, including Afanasyev, were transferred to work at the Central Design and Research Bureau of Sports and Hunting Weapons (TsKIB SOO) in Tula. Here he eventually worked throughout his later life, including in the position of lead designer. It was at TsKIB SOO that he completed one of his most famous developments. Here was created 23-mm anti-aircraft gun TKB-507 (index GRAU 2А14), which eventually became part of the towed artillery dual anti-aircraft gun ZU-23-2. He worked on its construction with P. G. Yakushev. These anti-aircraft systems are still in service, and their modifications are made in a number of countries.

A further result of the creative union of Afanasyev and Yakushev was an equally famous anti-aircraft installation. In 1962, the 23-mm TKB-4Ж anti-aircraft gun TKB-23Z with liquid-cooled barrel (index 507А2) and the shooting rate of 7-900 you shot in 1050-2 X-gun and 7-2 anti-aircraft anti-aircraft launcher Created with the direct participation of Afanasyev, the 14А28 and XNUMXАXNUMX anti-aircraft guns, thanks to the high combat performance incorporated in their design and high reliability of operation in any operating conditions, managed to win international recognition. These machines are in service with more than XNUMX states of the world, including Russia. 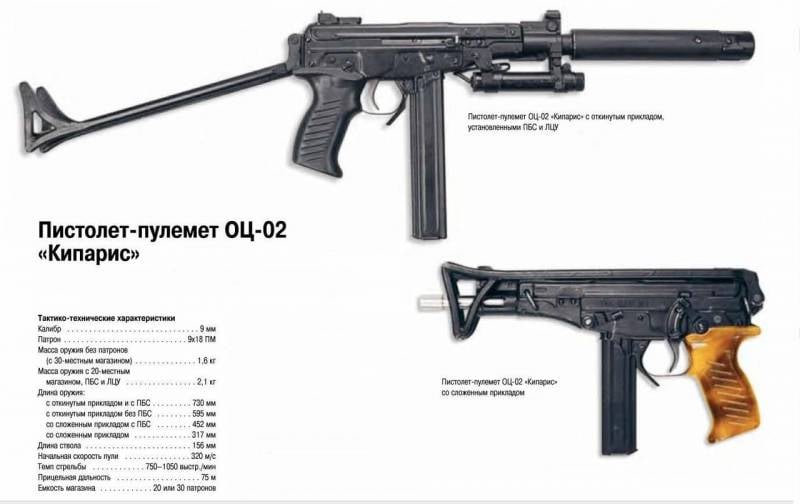 At the beginning of the 1970-ies in the Soviet Union, there was a need to equip police and army special units with small-sized small-sized firearms for a pistol cartridge - new submachine guns. At that time, many Soviet designers joined in the creation of new models; however, success ultimately accompanied only two of them: Izhevchan EF Dragunov and Tula N. NM Afanasyev. In 1971-1974 in Tula under the direction of Afanasyev a submachine gun was developed, which became known as the “Bouquet”. The weapons passed field tests, but were not put into service, the reason was the small effective firing range - up to 75 meters. But already in the 1990-s, law enforcement agencies once again became interested in this submachine gun. After some upgrades, the OC-02 Cypress submachine gun was put into service, and mass production began. Weapons, like other developments Afanasyev, turned out effective and reliable. Proof of this is the fact that Cypress was adopted by the Ministry of Internal Affairs, the Ministry of Justice, the Federal Security Service and the Customs Committee of Russia.

At the same time, it is necessary to understand that the creativity of the gunsmith’s designer is a constant competitive struggle with other constructs in which it is rather difficult to win. For a long time, Nikolai Mikhailovich Afanasyev worked to create the most widespread type of small arms, he wanted to create his own machine gun. This activity was carried out within the framework of a very tough competitive struggle, when the designer had to not only implement advanced and progressive ideas, but also anticipate options for the actions of his competitors. In 1970-s, he took part in the competition for the development of new automatic weapons, but his machine lost in the end, the best was the Abakan machine by G. I. Nikonov, a weapon of a very difficult fate. At the same time, the TKB-0136 machine gun offered by Afanasyev had its own advantages: its rate of fire reached 2000 shots per minute, due to the presence of a special modular device, it provided twice the accuracy of fire compared to the Kalashnikov machine gun. 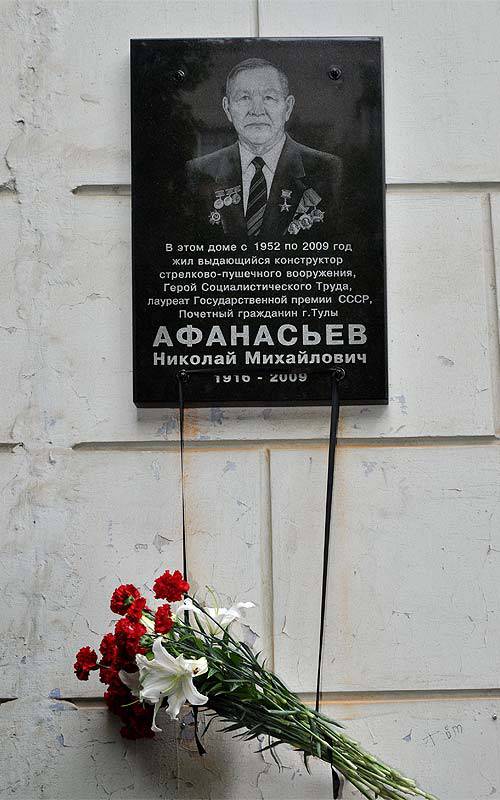 In total, Nicholas Afanasyev was designed around 30 samples of various guns. Curious is the fact that the first design development of the future famous gunsmith was not a weapon, but a sweeper-washer designed for cleaning city streets. And the designer's dream was to create an efficient and reliable potato harvester. This is easily explained, given that Afanasyev spent all his childhood in a small village and the problems of Soviet peasants were not alien to him.

Nikolai Mikhailovich Afanasyev continued to work at the KB until the last days of his life, living in Tula, which became the city of his life. Here he died 15 March 2009, at the age of 92 years. In 2012, a memorial plaque appeared in honor of the outstanding Tula designer armorer on the house of 86 on Gogol Street, in which he lived from 1952 to 2009. The board was opened in a ceremonial atmosphere on September 6, 2012, on the eve of Gunsmith Day.