November 24, 2016
33
Kiev practically broke the discussion of the procedure for granting special status to the self-proclaimed republics of Donbass, reports RIA News statement of Foreign Minister of the DPR Natalia Nikonorova. 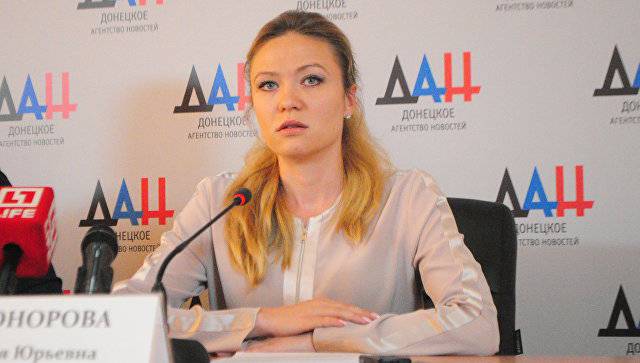 “The basis for discussion at the November 23 meeting was to be the“ Steinmeier formula ”as the only possible compromise mechanism for the entry into force of the law on the special status of Donbass, which in turn is the basis for the implementation of all the political points of the set of measures. Taking into account that the agenda of the meeting of the political subgroup was approved directly by the contact group 9 of November, the Ukrainian side and today actually disrupted the discussion of the issues in essence, ”said Nikonorova.

In her opinion, this "demonstrates the lack of coordination between representatives of Kiev in the contact group and the political subgroup."

“The Ukrainian side refuses to discuss this formula until the road map is agreed upon in the Norman format.” Such a position is contrary to the complex of measures by denying the need to coordinate political issues with representatives of the republic who are not present in the “Norman format,” the diplomat said.

A difficult situation also emerged when discussing the issue of the breeding of forces in the Donbass. Kiev announced that it would return to this issue only after the “demilitarization of Debaltseve”.

“To conclude today's work of the Trilateral Contact Group in Minsk.” During the work of the security subgroup, Ukraine once again raised the issue of returning to the line of demarcation from September 19 2014 of the year, according to which Debaltseve should be under the control of Ukraine. Further implementation of the framework decision on the breeding of forces and equipment may occur after the demilitarization of Debaltseve, ”said press secretary of the Ukrainian representative in non-negotiation Leonid Kuchma, Daria Olifer, on Facebook.

“Subject to compliance with the silence regime by ORDLO (certain districts of the Donetsk and Lugansk regions), dilution of forces and means in the area of ​​the Stanitsa Luganskaya can be conducted from November 26 to 2016. The tripartite contact group decided to hear Viktor Medvedchuk and ORDLO representatives at the next meeting in Minsk on the course of the release of illegally detained persons, ”the message reads.

In addition, in the political subgroup "the discussion of the modalities of elections to the Ordlo" continues, and in the economic "Ukraine has raised a number of fundamental questions."

“Critical is the further blocking of the agreements reached in the framework of the Tripartite Contact Group regarding the implementation of the water payment mechanism. Such a mechanism is necessary for the continued uninterrupted supply of water to residents of the entire Luhansk region, ”said Olifer.

“Despite the agreements reached and the creation of an appropriate mechanism, ORLO (LNR) has not sent a representative for two months to sign the relevant documents on the provision of water supplies,” she said.

“Strictly adhering to our commitments, this morning, Ukraine was fully prepared to launch the work of KVW in Gold. However, representatives of ORLO (LC) continue to block his work. During the meeting of the Tripartite Contact Group, a preliminary agreement was reached on opening this checkpoint to December 10. The Ukrainian side is ready for the work of this KPVV since March 2016 of the year ”, - stated in the message.