The most terrible military secret of Russia

November 24, 2016
171
Do not rush to shout about the bad guys, who rushed to disclose this secret. My interlocutors are completely adult people, and they will be older than me. And the fact that they told me, and told, unambiguously, a small fraction, was done not at all out of a desire to slander or evacuate the holy.

The main goal was to draw attention to the problems that today are noticeable to the eyes of a person who understands and is aware of the problem. If we estimate this, it is only when it is too late to bite off your elbows.

Initially, this material was planned as an interview. Questions and answers. But, having thought well, I rewrote it. My interlocutors epaulets absolutely not too tight, and they are not going to retire quickly. So it will be just a story from a certain person. 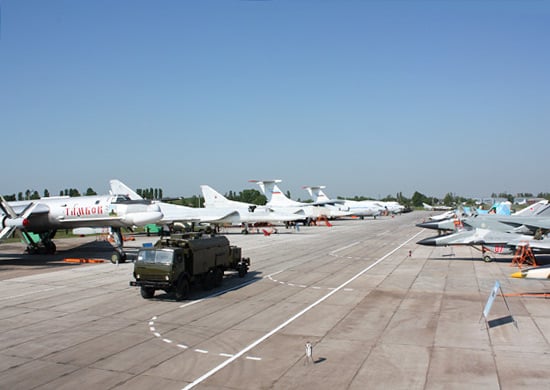 It will be about the institution, which is located in Voronezh and is called long and colorful:

The Center was established on the basis of an order of the Government of the Russian Federation dated 23 on April 2012 No. 609-r by merging VUNC Air Force "Air Force Academy named after Professor N. Ye. Zhukovsky and Yu. A. Gagarin" (Monino, Moscow Region) and Military Aviation Engineering University (Voronezh).

Little correction. With the formation of VUNTS "podgrebli" at the same time and the former now Voronezh Higher Military Engineering School of Radio Electronics, forge personnel for EW. And now from the school there is only one faculty №5 in the structure of the VUNC.

It is hard to say why this was needed, but the fact is that REBovtsev is now being prepared within the walls of an aviation center. It seems to be partially justified, because in the old school structure there were 2 faculties, air (“C”) and ground (“H”). Now everything is in one heap as it were.

Take a break. What do you think, dear readers, a lot of teaching staff from the Academy of VVA (Monino, Moscow region) rushed to such a wonderful job in Voronezh? Correctly think, less than 5%. At the level of statistical error. They wrote a lot about it and with taste, someone understood the teachers and professors who sent the province far away, someone accused. But in fact, the result was such that the VUZC would seem to have moved to Voronezh, but the preparatory staff did not. Fools in Russia seems to be less and less.

Here we must pay tribute to the head of the VUNC, Lieutenant-General Zibrov, who, according to my interlocutors, developed not only stormy, it is even difficult to say what kind of activity it was. Broom swept two districts, but staffed.

On the website of the VUNC it sounds like this: “The military educational and scientific center of the VVA Air Force has absorbed the glorious traditions of the Yu.A. Gagarin and the Air Force Engineering Academy named after Professor N.E. Zhukovsky, Military Aviation Engineering University (VAIU) (Voronezh), Military Institute of Radio Electronics (Voronezh), Irkutsk and Stavropol Higher Military aviation engineering schools, the Tambov higher VAIU of radio electronics, as well as the Federal State Research and Testing Center for Electronic Warfare and Evaluating the Effectiveness of Reducing Visibility ”.

It is clear that it means “absorbed”, right? Gathered with the world on a string. Well, it's not about that. By the way, my interlocutors just from the Research Institute of EW. But more about that later.

So, today we have a luxurious (real) and perfectly prepared training center. Yes, and the first scientific company in Russia was organized here. But we still will reach this company. And we have two problems.

The first, as already mentioned, the teaching staff. Which on 70% consists of teachers of the former VAIU, not the most prestigious school in the USSR and Russia. And, it can be said that VUZ is VAIU, but the level is higher and more comfortable. Despite the luxurious sign, it is still a "technical".

VAIU trained ground staff, as the name implies. Meteorologists, technicians, electricians, gunsmiths, telecommunications workers and other aerodrome service specialists. The same specialties today and in the structure of VUNC VVA. With the addition of a new faculty UAV. Point. Pilots and navigators, of course, are trained in specialized schools.

And, yes, also EW. Here we talked about EW mostly.

My interlocutors believe that shoving EW into the structure of a technical (excuse me, engineering) aviation establishment is far from a masterpiece idea. The fact that the faculty №5 in general is releasing someone is already good. But if you go into details, then the sadness is utter.

The fact that the 8 (eight!) Issues (including frames from VIRE) were not selected to have a single graduate for XNUMX (eight!) Issues in the structure of the Research Institute of Electronic warfare, says a lot. Meanwhile, every year, as the EW funds develop, the need for personnel becomes more and more tangible.

Yes, this year already two lieutenants came from troops in the direction of defending a candidate’s degree. The level of training is staggering. In general, it is not clear that these officers did these two years in the army. And than they will write dissertations. Not in terms of hands, in terms of brains.

The level of preparation of the minds of the "victims of the exam" plunges into a stupor. People, specialists, officers, having finished training, are not capable of anything. Yes, today the army has prestige. Good salaries, prospects, and more. But there are actually no people capable, and most importantly, willing to go at least somewhere. Pofigizm dominates. The main thing - to serve a contract. How - we'll figure it out.

SRI EW - a small institution, about one and a half hundred people. But the institute is not able to provide itself with at least some influx of personnel. Frames simply nowhere to take. Meanwhile, the equipment that the “old men” experience at the institute is often tomorrow. And it is in the Research Institute of Electronic Equipment give a conclusion about the feasibility of state tests of a particular development. And bring the technique to the mind within the framework of the same state tests.

Who will be doing this in ten years, when the “old men” will go to a well-deserved retirement, no one is taken to say.

About the "scientific company." Oddly enough, helps out. Far from the most stupid graduates of technical universities, the same "polytechnic", get into HP. And former students go there willingly. HP - this is not really an army, if that. Rooms in a dormitory room for four, with a TV. The Internet. You can work. You can really do science.

For the main contingent of HP - it's just a one-year "freebie." It seems you are in the army, but it seems not.

But there are perverts, thank God. Who after HP go quite normally to serve. Over the past three years, such people 5-6 found. Indeed, smart and promising guys.

But there is a nuance. Yes, they are on contract. Yes, their rank is officer. (I myself saw a reportage on TV last year, when two ordinary HP demobels turned into lieutenants in a single instant. - Approx. Ed.) But here the whole point is that they were finishing not a military college, but civilian. And, accordingly, they sneeze on this contract, if that. They don’t have to teach the state anything, if they wish, they will turn around and leave.

Who will replace them (and we, too, by the way, we will not last forever)? No one.

The worst thing is that everyone understands it. And we, scientists, and teachers. A few days ago they came to take tests for "fizo", a little earlier in the sports complex arrived. We had a shock. Engaged in two groups of cadets. More than half in tattoos. And not "for the Airborne Forces" or a heart, no. Tigers, dragons, snakes, some incomprehensible creatures in general. All colors of the rainbow. Painted, as if they were recruited in zones, were lured by amnesty.

We asked the head of the department, what a disgrace, because tattoos are prohibited. It is impossible for an officer to have them, especially when on the whole arm or leg. These are nothing yet responsible. You would have looked at the others. There is a group here, every one there is painted. No others…

And here we are, two old capacitors, little by little we begin to understand the whole horror of our tomorrow. We look at the cadets, at yesterday’s schoolchildren and tomorrow’s officers, and we understand that they don’t need anything for the most part. Dressed, shod, fed, allowance for which in the civilian is not just necessary to plow, life with perspective. Fine…

Language does not turn to call them stupid. Neither the cadets, nor the two flyers, who both went to the troops with empty heads, and returned with the same. Well, how can you serve two years in EW, and confuse the "S" and "L" ranges? How???

This is a countermeasure system, a system that will destroy us without nuclear warheads. Which has already turned several generations into monkeys, who simply do not know how, and, the worst thing, do not want to think.

We are about the exam.

EGE will kill us very quickly, simply because it is not necessary to think. Physicist, unable to calculate the simplest model on paper. Pilots who drop bombs on GPS (well, at least they do), but they are unable to do it with sights. Electronics engineer, poorly representing physical processes. And so it is possible to infinity.

The young really have been taught THINKING. DO NOT THINK, they still know how to think at the level of instincts. THINK.

Yes, in the trench with a machine gun - easily! Enough of the mind and patriotism. The guys really went better in this regard, not such amoebae as 10 years ago. In the tank - fine. To the gun. With a ballistic calculator after the iPhone anyone will master.

Today the problem is in testing new developments. For use, one brain is needed, for testing, another. And for development?

If tomorrow we will have no one to experience and bring to mind the developed, then what will be the day after tomorrow? Who, tell me, will develop what needs to be experienced?

Who developed what we are proud of now? "Ruby" the same? Yes, those who are already plain and not among us. They took their theses. And we do not have long. We can teach, we can still work, we can bring anything to the mind. Today. But if today there is no one to teach, then tomorrow everything will be very sad.

The training system was almost killed, with two schools scraped onto the faculty, well, Cherepovets was reanimated. But there are almost the same problems.

But the main meanness of this exam is that the young people absolutely do not know how to think and analyze creatively. “Otafonit” task, remember the order of execution of functions can still. Understand the problem - units.

So strange, to be honest. All my life we ​​thought that we would fight with the US Department of Defense. And the Russian Ministry of Education almost defeated us.

So it turns out that the most important military secret of Russia is how many intelligent people we have left. And how many of them can be in perspective.