Chisinau thriller "After the Election", or the Minister of Defense of Moldova expects ... Dracula

November 23, 2016
17
Terry russophobes and dreamers about the absorption of Moldavia by neighboring Romania still remaining in the Moldovan political elites still cannot recover after the victory in the presidential election of the head of the Moldavian socialists, Igor Dodon. Maya Sandu, who lost the election to the values ​​of European democracy, which declared its “unlimited commitment to the values ​​of European democracy”, not only does not want to admit the results of the first direct will of the people for 20 years, but also announces the filing of claims to the Central Election Commission and even the Ministry of Foreign Affairs of Moldova.


What did the “Euro Candidate” Sandu see criminal in the actions of the Moldovan Central Election Commission and the Ministry of Foreign Affairs? The logic here, to put it mildly, is florid. The loser of the election declares that the CEC allegedly was more convenient to hold elections in the absence of hundreds of thousands of citizens in the country who have served abroad as labor migrants. At the same time, Sandu announced that the main foreign ministry of the country was also indulging in the mass departure of Moldovans from the country. Like, if all guest workers returned to Moldova and came to the polls, she would have won a “bright victory”. From Maya Sandu on Facebook:
Remittances of our citizens living abroad, compensate for the failure of the state. However, those who represent him decided that these citizens did not deserve to exercise their right to vote.

Ms. Sandu does not care about several important aspects at once. First of all, any citizen of Moldova who wishes to work in Moscow or another large city of the Russian Federation could vote at the working Moldovan polling stations opened by consular services. But far from all expressed their desire to run and vote for Sanda, unfortunately for Sanda herself. Secondly, isn't it the same “pro-European” forces, which Sandu herself represents, did everything so that hundreds of thousands of Moldovan citizens were forced to leave their native country to earn money?

It should be noted that their demarches on the victory of the socialist Igor Dodon in the presidential elections in Moldova expresses not only Sandu. One of those who are trying to put a spoke in the wheel of the elected president of the country is the Moldovan Minister of Defense Anatol Salary. The situation was reduced to the theater of the absurd, when by his order “ordered” Mr. Salaru to remove the portraits of the president, the commander-in-chief, from the walls in military units. According to the tradition and the resolution adopted earlier (at the dawn of independence) by the Moldovan Defense Ministry, in the military command cabinets, as well as in the rooms for personnel enlightenment activities (a sort of modern version of “Leninist rooms”), portraits of the supreme commander should hang. After the election, Igor Dodon became the supreme commander in chief, and in some parts they have already begun to engage in portrait changes. Salaru decided to turn the process into a circus ... In order not to touch the issue solely on the portrait of the president, he decided to ban the use of portraits and other state officials.

On his order, the Minister said through Facebook:
Today I handed over to all divisions of the National Army to replace portraits of Moldovan officials (president, minister, chief of the General Staff, etc.) with portraits of our ancestors, rulers, national heroes or prominent figures (attention!) Romanian culture.

It is worth recalling that Mr. Salaru is one of those representatives of the Moldovan Cabinet who, with their hands and feet, are in favor of integration (or, more precisely, absorption) with any price for Moldova.

This did not stop the development of the situation, and Igor Dodon, who tried to restrain his emotions after winning the election, towards Salaru threw them out to the full. According to the elected Moldovan president, he was not called a provocation by the defense minister. Dodon, referring in absentia to the current minister of defense, called on him not to overload the portraits, but to think about the real security of Moldova and the protection of its national interests. The head of the socialists noted that since Salaru had failed in his job as minister of defense, then it was time for him to prepare "for prison."

Igor Dodona quotes the Moldovan portal NOI.md:
Salaru will sit for a short time in the minister’s chair, surrounded by portraits of Romanian figures stories and culture. His place is in prison. On the walls of his camera will hang a single portrait. On it, the Romanian historical “hero” Vlad Tepes will hold an aspen stake in his hand. It will be a suitable picture in the place most suitable for the present minister Salaru. 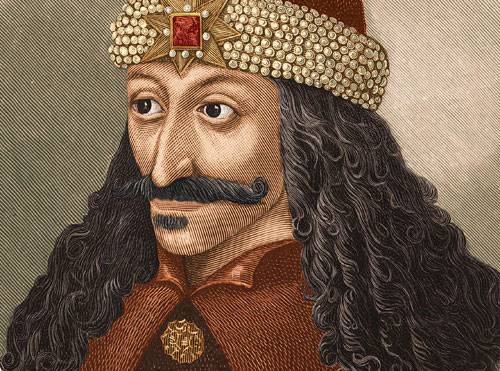 And added:
I am not worried about the fact that my portraits will not hang in the military units. I personally support the portrait of Stefan cel Mare, the most important figure for our people, in the offices of all officials. We have a rich history and strong personalities, and we do not need any Romanian "heroes" imposed by Mr. Salaru.

In turn, the talkative Moldovan defense minister accused Dodon of being "going against international legislation on the Crimea." Recall that the elected Moldovan president spoke out in the spirit that he called the de facto Russian Crimea.

Minister Salaru quotes Moldovan resource Point:
Not without surprise, I observe the loud and at the same time devoid of any meaningful statements by Igor Dodon that the Crimea, de facto, is Russian, and de jure, not yet. Due to declarations of this kind, all Igor Dodon’s wishes - to open the Russian market for Moldova, may turn out to be in vain. It is possible to get to this market only in transit through Ukraine, but Dodon’s statements on Crimea can force the authorities of a neighboring state to block transit, thereby nullifying such a highly advertised and hypothetical event as the opening of the Russian market. Crimea belongs to Ukraine, as well as Transnistria is the territory of the Republic of Moldova!

Meanwhile, in Moldova itself, the liberals are actively discussing "why the pro-European forces did not organize mass protests against the election results." By the way, for such protests even the color was prepared: yellow. And the “probable events” themselves were called the “yellow revolution”. In social networks, Moldovan liberals wonder why Sandu did not enter the “yellow revolution”, trying to poke a finger at “the more active Ukrainians in 2014 year”. They say that they came out ... Well, what are these people talking about? What else is the “yellow revolution” in Moldova in November 2016, when in the European Union no one remembers this country against the background of mountains of their own problems, when in the USA the honored Maidan bakery woman Nuland comes to retire, and when the Moldovan “Euro-optimists” have only and did what they plundered everything that was not plundered, that in Moldova survived ...

So what about the portrait of Vlad Tepes, with an aspen stake in his hand - in a prison cell? ..