British Navy ceased to correspond to the ambitions of London 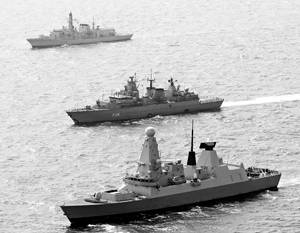 Her Majesty's Navy, not only far from the image of "Master and Commander" of the British Empire, but also does not meet modern threats. In the British Parliament are alarmed at the Navy soon will be "negligible" warships. It was once the strongest fleet of the world is in a sorry state?


The royal fleet of Britain was criticized for the "negligible number" of ships. According to the head of the British Parliamentary Committee on Defense, Julian Lewis, the Defense Ministry risks leaving the country with less than 19 destroyers and frigates.

Reducing this number by at least one unit, even for a short period, will be “totally unacceptable” and will make Britain vulnerable to external threats, said the parliamentarian quoted by The Guardian in London. "We notify the Department of Defense that they should not allow this to happen," Lewis stressed.
One of the threats London denotes is quite clear. In January of this year, Rear Admiral John Will, commander of the underwater fleet Her Majesty, the Daily Telegraph said in a comment: “The facts show that Russia is building a new class of submarines. This should cause concern in the UK and encourage protection of its deterrent. ” According to the British admiral, nuclear deterrents are necessary to ensure the security of the kingdom, they are "insurance" against a threat that can only be confronted in this way.

More recently, alarm statements were made from a higher level. October 29, the British Secretary of State’s Defense Minister Mike Penning, said: Moscow could send a Russian naval shipboard group, led by the aircraft carrier Admiral Kuznetsov, through the English Channel to give a “signal” to the UK. Despite its age, the only aircraft carrier in Russia, "Admiral Kuznetsov", which passed along the coast of Great Britain, gives the impression that there is no such ship at the disposal of the British Navy, Sky News stated at the time.

What is most worried about London?

According to the head of the parliamentary committee on defense, Julian Lewis, the 13 ships of the Royal Navy will be removed from military service in the period from 2023 to 2035 a year. The ambiguity of plans to replace obsolete ships by 2035 year still exists, emphasizes The Guardian, quoting parliamentarians.

Recall that in 2010, in the UK, large-scale reductions in the military budget and armed forces were announced - the most massive since the end of the Cold War. Then the plans for the swift and decisive write-off of the material part of the fleet's strike forces drew criticism in the country. Five years later, London announced plans for a new reduction: it was reported that by 2018, the British armed forces would be reduced by 20% and this reduction would affect elite branches of service, the royal fleet and the Air Force.
Add that very recently, on November 15, British media reported that the kingdom was also planning to write off the Harpoon anti-ship missiles by the same year 2018. There is no clear program for replacing them yet, so the royal fleet in 2018 risks remaining without missiles capable of attacking enemy ships, IHS Jane's 360 warned British military portal.

This is not about the recent initiatives of the Cabinet of David Cameron, passed "inherited" to the government of Teresa May. There is already a long-established trend.

Back in 2009, due to the budget deficit, Great Britain began to abandon the construction of new large-scale facilities, in particular, there was not enough money to build the Prince of Wales aircraft carrier; instead, the government decided to "redraw" it into the landing force ship. Several more projects were frozen. This allowed the country to save billions of pounds.

However, as the media noted, even those aircraft carriers who have missed the freezing risk are at risk of being “de-energized by iron cargo”. Due to the billion-dollar deficit in the financing of the defense complex, the capacities of power cables at the base in Portsmouth, which have been in operation for eighty years, do not correspond to the ship’s capacities.
Meanwhile, the Ministry of Defense allocated 6 billion pounds for the construction of aircraft carriers of a new generation.

The Ministry of Defense hopes to partially mitigate the problem by selling 2040% of defense facilities in the period before 25, but the audit bureau claims that this money will not be enough to cover the galloping costs.

The reduction of armaments does not mean that the British government has begun to take poor care of the country's security. In mid-November, Secretary of Defense Michael Fallon at a meeting in Brussels called on NATO allies to increase defense spending after the US presidential election.

“Americans used to say that they would continue to contribute more than other NATO members. If the new administration says that you need to be on your guard, it will make you think, ”said Fallon, quoted by The Telegraph. He recalled that "Europe is also facing major security challenges."

As the first deputy chairman of the Federation Council Committee on Defense and Security, Franz Klintsevich, noted in the VZGLYAD commentary, since the NATO budget still rests on US contributions, the rest of the western countries simply understand that there is a country that reliably ensures the interests of the alliance, the logic is: “ You can get political dividends, without inflating the military budget, and sometimes reducing it. ” “Today they began to whip up this hysteria against the background of Russophobia,” states Klintsevich.

Britain has always been a maritime power, while Russia has long been in a state of “the absence of any armed forces,” notes Senator Klintsevich. As a result, "many have relaxed: both the United Kingdom, and Germany, and France."

Only in the last 25 years Russia has re-armed, modern armed forces have appeared, new ships, worthy military training - this is how, about 3 thousands of exercises took place last year and this year, before there were only a few of them, the senator stated.
In fact, "Russia began to engage the armed forces in the way that combat training plans require," he noted. However, many said that Russia was beginning to escalate the world situation. At the same time, in order to carry out a war of conquest, too many conditions are needed: the investment of funds, the other organizational and staff form of the armed forces, and their mobilization, the source adds. Such signs of intelligence reveals at once, it becomes immediately clear that the country is preparing for something, Klintsevich said.

In fact, the West, especially the Americans, “most outraged that Russia can afford to say no under current conditions and conduct a modern, high-tech operation,” the senator said. The Americans have already set a trend: it is necessary to increase the allocation of funds for weapons, but there is not enough money, now the crisis, the source adds.

“The best and most reliable thing is the Russian threat, a weak fleet, an outdated army and that“ we need to defend ourselves! ”. The logic of those representing the military-industrial complex, the military lobby, is understandable, ”the senator noted. Most likely, they will succeed, will receive money, he added. “Today, Russia is the most convenient tool for solving both domestic and geopolitical tasks that are resolved by leading world powers. This trend will continue, ”Klintsevich summarized.

The ambitions of the shortage of ammunition

The number of ships should be assessed on the basis of the tasks assigned to the fleet, said military expert, chief editor of the Arsenal of Fatherland magazine Viktor Murakhovsky to the VIEW of the VIEW. “The military-political leadership of Britain sets big tasks, including a presence in the Pacific region and so on. Of course, the number of ships for such tasks is insufficient, ”the expert emphasized.

Meanwhile, "Britain plans to build aircraft carriers for its fleet - they have not lost their ambitions, but, as always, they don’t have enough money," stated the source. At the same time, there is also not enough money in support of the combat ready state of the existing ships. They are forced to withdraw from the supply of outdated weapons systems, for example, the same “Harpoon” missiles. A weapon to replace them will appear only after the 2020 year, said the source.

For the maintenance and repair of some ships, Britain is now forced to invite French specialists, because there are few such British citizenships.
However, “their ambitions are great,” Murakhovsky stressed. He recalled that the operation in Libya was carried out with the support and great contribution of the British Navy. "Given the scale of the budget of the country itself, we must somehow temper our military ambitions and stretch our legs according to our clothes," the expert concluded.

Suffice it to protect against illegal immigrants and terrorists

Mikhail Nenashev, captain of the first rank of the reserve, chairman of the All-Russian Movement of Fleet Support, believes that the English fleet still represents a serious threat to Russia in the event of a conflict, especially in the region of the middle and north Atlantic.

“They have about thirty ships, which is completely sufficient in view of the modernization. In addition, as part of the British fleet there are several nuclear submarines, including those armed with ballistic missiles, as well as surface forces with real potential, ”the expert of VZGLYAD told the newspaper. In his opinion, injections about the deplorable state of the fleet, appearing in the British press, are part of the battle for the military budget that is being waged with parliament and with English taxpayers.

The expert also believes that, despite the fact that in London they love to blow an elephant from a fly, as it was during the passage of the Russian squadron led by the aircraft carrier Admiral Kuznetsov at the British borders, no one is going to attack them. “There is more than enough of the forces that the UK has to protect against terrorists or illegal immigrants,” he explained.