Exactly 80 years ago, 21 in November 1936 of the year from the assembly shop of the plant of the company "Junkers" in Dessau rolled out the first production instance of the dive bomber Ju.87A-1 Stuka. Stuka ("Stuck") - short for Sturzkampfflugzeug - "diving combat aircraft." Already in February, the 1937-th first link of such machines was sent to Spain for testing in combat conditions, where they performed very well, demonstrating the exceptional accuracy of bombing. And three years later the predatory silhouette “Stuki” became famous all over the world, becoming a kind of symbol of Hitler’s blitzkrieg.

The first serial modification of the Ju.87 differed from all subsequent wide fairings of non-retractable landing gear. In the Soviet aviation industry such fairings were called "pants". In the future, the fairing reduced, because of what the chassis began to resemble the feet, shod in sandals. And since by the middle of the twentieth century, this archaic footwear was still in use in the USSR, the aircraft in the USSR was nicknamed "lapotnik" or "laptezhnik". The “Laptezhniki” were used on the Soviet-German front right up to the end of the war, and the last to whom they entered service in February 1945 were the Air Force of the so-called “Russian Liberation Army” by General Vlasov. But this is another история.

On the screen saver - the second prototype "Stuka" Ju.87V-2 in a test flight in the spring of the year 1936. The aircraft has not yet been credited to the Luftwaffe, so only civilian identification codes are stamped on it.

The prototype Ju.87 on the test site in Rechlin.

One of the first production copies of the Ju.87А-1 in military camouflage. In the background - a heavy twin-engine Messerschmitt fighter Bf.110.

Ju.87А-1 in Spain with the franchist identification marks of the Air Force and the emblem of the link "Kette Jolanthe" - a cartoon pig Iolanta on the "leg". 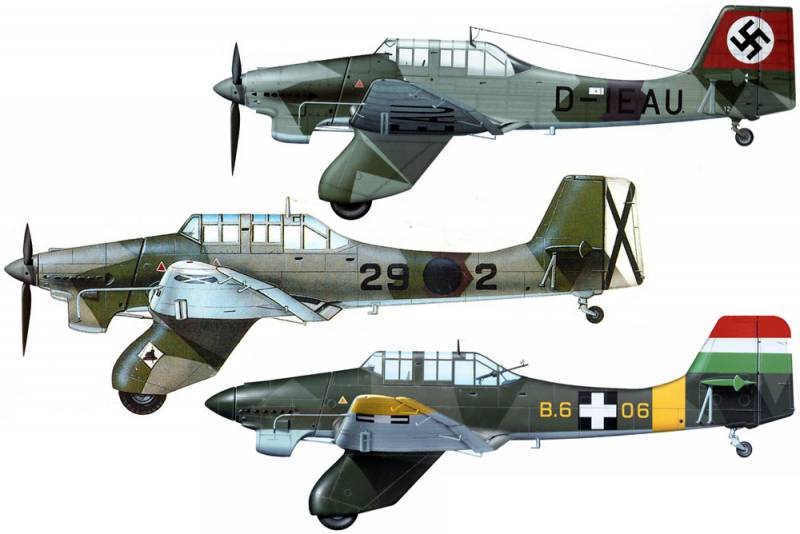