One Hundred Days of Trump: Drain the Marshes and Dry the Oars 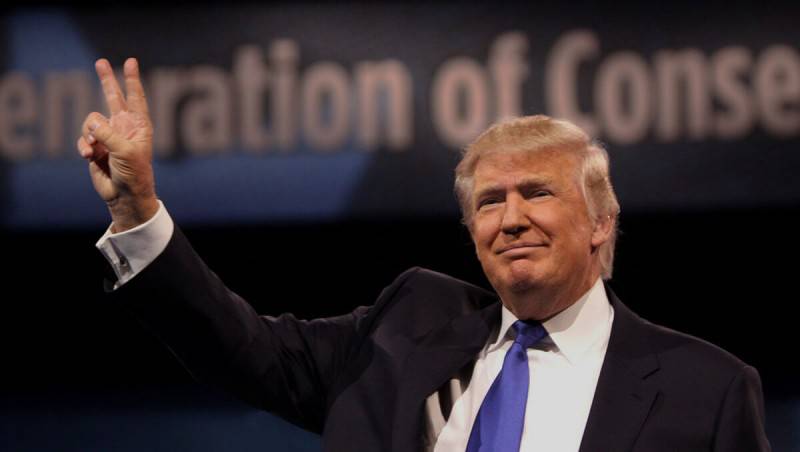 Bye Rosatom captures energy markets, and Moscow squeezes out juice from Japan, Trump gets up terrible things with the minds of Americans. So scary that some California, for example, are ready to "throw" from the United States.

Members of the movement Yes California, which advocates the so-called Calexit - separating California from the United States, submitted a proposal for a referendum to the office of the state attorney general. It is reported that Yes California asks to give the proposal the official name and make a conclusion on it. Supporters of the California office are hoping that the vote will take place in 2018 year. The reason for the appeal to the office of the Prosecutor General was the victory of Donald Trump in the US presidential election, said the vice-president and co-founder of the movement Ruiz Evans. November 8 61% of state residents voted in favor of his rival Hillary Clinton. Supporters of the separation of the state from the United States explain their position by saying that the government spends taxpayers' money on defense and on armed conflicts that do not bring results. Activists intend to send taxes on the social sphere of California.

Meanwhile, the newly elected president of the United States not only surprises the Kremlin, but also tries to keep its electoral promises. It turns out is not very good. First, the Trump’s Russophobic team has been replenished with a few new members this week: November 18 announced that Congressman Mike Pompeo will become the head of the CIA and the US Attorney General under President-elect Donald Trump, respectively. for Russia on the movement of troops to Kiev ") and Senator Jeffrey Sessions (" Russia must be punished for the Crimea "). Trump also approved a new presidential adviser on national security issues - Michael Flynn (Russia's first neutral candidate). He also appointed the elected vice-president Michael Pens (“Russia is a dangerous country, and the United States must act aggressively towards it”) as the head of its team for the period of the change of power. And later, Trump appointed an Orthodox Christian head of the White House Administration - Raines Pribus (the second neutral candidate, did not support anti-Russian rhetoric, a supporter of the withdrawal of the American contingent from Afghanistan and Iraq).

Second, the Contrary to voters' expectations, Trump no longer builds a border with Mexico and for some reason is not ready to solve health problems.

The only thing that still pleases the oligarch is with economic measures and the mood to defeat unemployment. The first point of his program remains the termination of the Trans-Pacific Partnership as the main enemy of the American economy. It is surprising that the States were the initiators of this agreement in order to get good markets and cheap goods for themselves.
В supposed The partnership includes: Australia, Brunei, Canada, Singapore, Vietnam, Chile, Peru, New Zealand, Malaysia, Mexico, Japan and the United States.

It is about the complete elimination of customs duties, the unification of sanitary and phytosanitary measures, the general policy in the field of protection of intellectual property rights, government procurement and competition policy. The TTP abolishes duties on more than 18 thousand products. The full parameters of the trade-offs in the TTP have not been made public: the text of the agreement is not yet available, only the 20-page summary of the talks between the heads of trade departments of 12 countries has been published. Negotiations were generally conducted in an atmosphere of strict secrecy. It was signed 4 February 2016, but has not yet been ratified by all participants.

First of all, the TTP is seen as a counterbalance to China. Who wants to share his progress with no one. It noticeably strengthened the SCO, leading in South-East Asia and not planning to slow down its pace. Of course, inviting Beijing to a partnership is also unprofitable - then the way to most regional markets will be cut off for sure.

Trump called TTP “potential disaster” for the United States. "Instead, we will negotiate fair bilateral trade deals that will return jobs and production back to the US." About what a catastrophe will result in the return of production to the States, they started talking to Apple and at the Ford plant. Well, wonderful Chinese-American goods will become unavailable to us, but its market will rise, and jobs will appear in the United States.

In general, the intention to abolish the TTP is a good intention for everything other than American exports. But since Trump chooses isolationism, a reduction in the export of goods seems to refer to inevitable losses. The abolition of the TTP can be considered a great joy for the Russian Federation, because the smaller the unions of competitors, the greater the chances for creating their own zones of influence.

But more interesting for the Russian Federation is the fact that Trump once again announced his intention to lift restrictions on the production of hydrocarbons, including offshore fields. According to him, this way "millions of high-paying jobs will be created." But at the same time - the price of oil is overthrown. Moreover, if OPEC signs an agreement on freezing, then, in fact, the hands of all oil producers, except the United States, will be tied. Because the OPEC meeting is on November 30, and Trump's inauguration is on January 20.

Well, the promised "drying of the swamp": Trump said he intends to impose restrictions on officials on lobbying. “As part of our Osushi Marsh plan, we will introduce a five-year ban for officials to become lobbyists after leaving the administration (US) and a lifelong ban for officials to lobby on behalf of foreign governments,” the elected president said. In addition, he noted that he would strive for a procedure in which the adoption of one regulatory act entails the abolition of two other standards. The motto "Osushi swamp!" Trump actively used during the election campaign, bearing in mind the need for reform of the public administration system at the highest level. In addition, the politician spoke about the excessive number of regulatory acts that, in his opinion, hinder the development of the country.

For us, residents of another continent, this item is interesting only in terms of an entertaining chain reaction. What will happen if officials, the power elite, suddenly limit their influence? California starts everywhere. Those who have influence will begin to use it, use all the levers to make it clear to the president that he is not yet the navel of the earth. It is clear that Trump is introducing such ideas in order to make room for the activities of his business friends, whose interests do not always coincide with the ideas of politicians. But the elite have their own interested business stratum, which is not very pleased with such a brazen and boorish invasion of the usual tool - the political lobby. Starting a war with the "old men" of the Democrats, Trump risks getting deep artificial internal political problems as a response to the excessive dissimilarity of views.

So, despite the divergence of some words with some other words (things will only begin in January), Trump reveals himself as an unusual and extremely entertaining politician. Despite his lack of experience, he succeeds in speaking and promising very convincingly, and also very smoothly and imperceptibly drastically changing his point of view. And yet, it is obvious that he personally will be focused on domestic policy and the external economy, he will not be up to the problems of Europe, which, alas, will become free. Radical decisions to the authorities (and judging by the number of generals and the military in the administrative apparatus, there will be a lot of radical decisions) may trump integrity issues. And since a conservative current has a significant influence on him, it is possible that attempts to secession will be a start for new laws restricting the freedom of the States.