November 23, 2016
11
A change in the American leadership can go sideways to “European dependents”, who are used to living at the expense of their patrons. A striking example is Poland, playing the old Russophobic song in the hope of appealing to the new US president. The other day, the country's leader, Andrzej Duda, sang another verse on the theme of a perky tune. 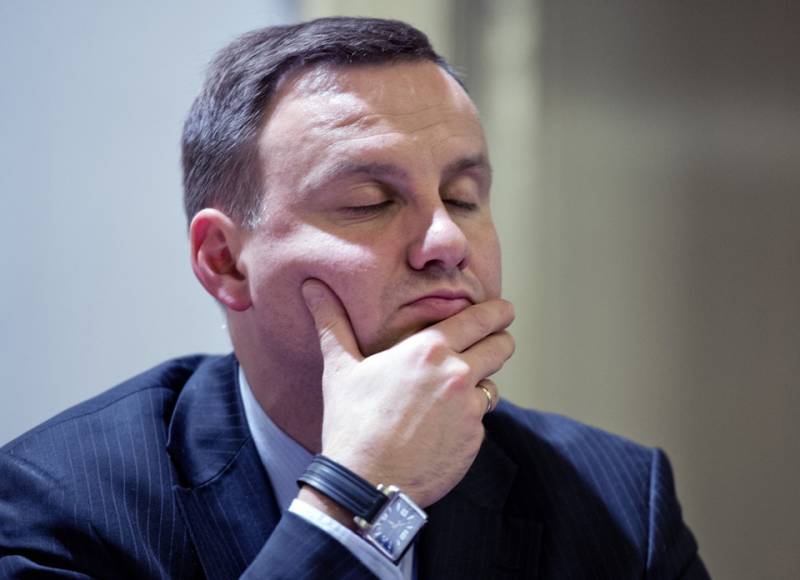 As part of his election campaign, the newly elected White House host, Donald Trump, has repeatedly said that NATO representatives must earn their own security. In addition, one of his proposals was to normalize deteriorated relations with Moscow, and this, of course, could not please North Atlantic Alliance dependents.

It seems that, in the first place, American ideas did not appeal to Poland and the Baltic countries, which, apart from riotous Russophobia and endless love confessions to the military-political bloc, cannot offer anything in return. Despite the fact that such activities with the arrival of Trump, apparently, will not be in demand, Warsaw does not lose hope to settle on the neck of the United States with the help of the old Russophobian trick.

After the European Union’s locomotives, represented by Germany and France, resigned to Hillary Clinton’s defeat and discussed future policy with Trump, the turn to talk with the billionaire president reached the second-tier countries of the European Union. So, last week a telephone conversation took place between the heads of Poland and the United States, about the results of which the Polish leader told journalists two days later.

According to Andrzej Duda, the results of the negotiations convinced him that Washington would continue to help the republic defend itself against the “enemy” in the person of Russia. The politician said that the future American leader dispelled his concerns regarding the future position of the American leadership towards NATO and Warsaw. In addition, Duda expressed confidence that the rhetoric of the United States against Moscow will not undergo significant changes.

Also during the press conference, the head of state told reporters that the conversation with Trump was like a conversation between old friends. It is probably appropriate to emphasize here that politicians have never met in person, and they didn’t even know each other before the telephone conversation.

It is worth noting that the anxious head of the Republic of Poland began to prepare for a conversation with 45, the US president immediately after his election, and over the past ten days he regularly added notes to the old Russophobic melody. So, November 10 at the opening ceremony of a memorial plaque in honor of the participants of anti-communist movements Duda called the USSR an “invader” of Poland, holding the country in occupation from 1945 to 1990. Also on November 16, he shared his fears with the Council of Europe, calling imperialism one of the world's major dangers, which subdued weak political actors by military means.

One gets the feeling that the nervous president of Poland sincerely believes that the republic will still be able to influence the course of American politics, and is full of hopes to convince Donald Trump to pay for a Polish song that the outgoing US leadership so liked. Apparently, if the White House doesn’t like such creativity, then Warsaw will have no choice but to learn a new tune, in which Andrzej Duda and his supporters explain the fallacy of the policy of recent years to the public.