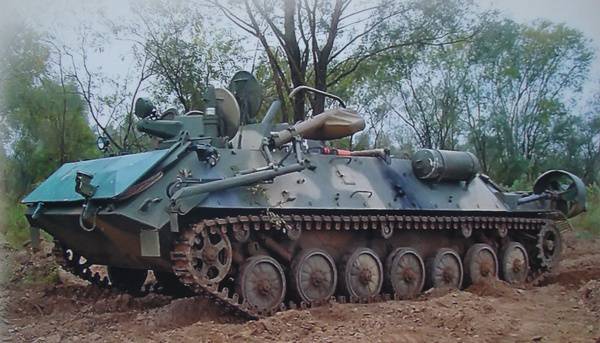 Part two. Improvement and development of the machine.

In the late 1970s. it became clear that the underwater reconnaissance was too expensive. An officer was needed for his management, which turned out to be impractical. Also, the hydraulic control system was complicated. At the same time, underwater crawls produced a lot of false positives, and this is one of the main reconnaissance devices. In general, the question arose about the simplification, modernization of the machine and, accordingly, about its cheapening. In addition, by this time echo sounders appeared that made it possible to determine the density of the soil from the surface of the water. That is, the possibility of crossing tanks through a water barrier could be determined without diving under water.

Therefore, in the OGK-2 Kryukovsky plant was designed a new intelligence officer - the product "78", which received the cipher "Berkut". The new machine is the development of the intelligence officer IPR, but, as mentioned above, in a simplified version. "Golden Eagle" does not sink under water, but works only afloat. As the base of the car was used durable body predecessor with a diesel engine, transmission, instruments and hinged. The Berkut was distinguished by the absence of ballast tanks and tanks for compressed air, there was no airlock chamber for the diver’s exit, the RDP device, etc.

The new reconnaissance aircraft was intended for conducting engineering reconnaissance - identifying tank passes on rough terrain on land and on shallow water barriers, including the definition of minefields. For this purpose, a modern-day digital mine detector Kolyun and two external inductive elements on hydraulic sliding rods were installed. They ensured that each inductive element was located in the gauge zone and at the required distance. 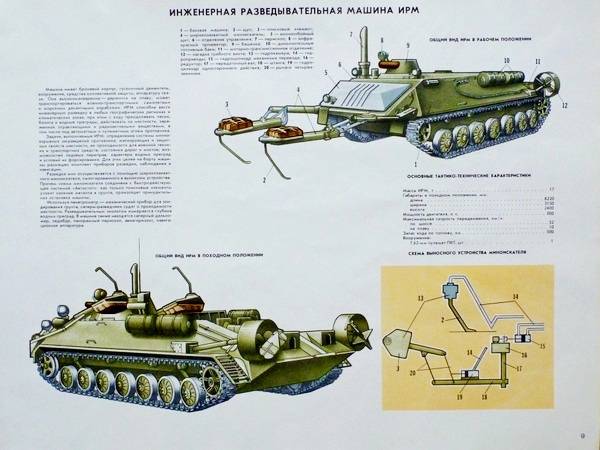 The scout can perform his work in the enemy’s counter-action zone - the corps has protection against weapons, and in the rotating turret Kalashnikov machine gun was installed with b / c in 1000 ammunition. In addition, inside the control and crew compartments, laying is provided for 3 AKM-S submachine guns and 150 cartridges for them, a signal 26-mm pistol with two sets of cartridges, 10 hand grenades and 15 kg BB. The scout case itself is divided into seven compartments and sealed, which ensures the buoyancy of the machine.

The machine has anti-nuclear, chemical and biological protection, a fire extinguishing system, a drainage device and a TDA masking system. For observation by day and night, as well as to orienteering on the ground, the following machines are installed: PIR-451 periscope, which allows you to observe from the machine both on land and on water; TPNO-160 observation devices; AGI artificial horizon (installed in front of a military mechanic), showing the longitudinal and transverse angles of inclination of the terrain; navigation equipment THA-3, which includes a gyrocursouxteel, a control panel, a direction indicator, etc. -2, engineering intelligence periscope PIR, rangefinder sapper DSP-2, etc. 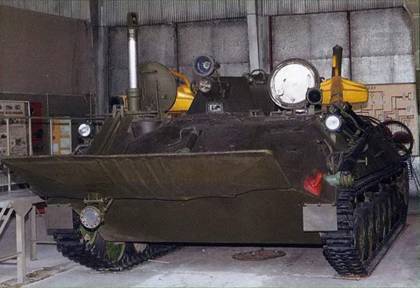 A few words about the echo sounder. It is designed to measure the depths, the profile of the bottom of the water barrier, the detection of navigation obstacles in the water column with the recording of all information on electrothermal paper. The range of measured depths is from 0,5 to 20 m. One roll of paper is enough to work for 2 hours at a speed of the machine on water 5 km / h. When operating the echo sounder, the machine must maintain a constant speed on the water. At the same time, to determine the horizontal scale of the captured bathigram (bottom profile drawing on paper), it is necessary to determine the width of the water barrier using a periscope (or other devices).

The crew of the scout consisted of 6 people:
1. Machine commander directs the actions of the crew, compiles and transmits intelligence reports through the radio station P-123 and (or) in writing. It directly works with navigation equipment, the CC-2 mine detector, the echo sounder and the PIR-451 periscope.
2. Driver mechanic. Drives the car, works with artificial horizon, measures the speed of the flow of the river.
3. Shooter radio operator. It monitors the terrain, is responsible for the safety of the crew, destroys the detected targets by the decision of the commander, is responsible for the operation of the radio station and conducts radio exchanges following the instructions of the commander of the vehicle.
4. Senior Sapper. Supervises the actions of sappers when working outside the car, monitors the operation of navigation equipment, decides to destroy or neutralize the mines found.
5. First Sapper. Responsible for the condition of mine detectors, working outside the machine, working with the IMP and RVM-2 mine detectors, preparing and carrying out blasting operations.
6. The second sapper. It works with a distance measurement device (DST-451) and an engineering survey instrument for design and survey.

At the end of 1978, a decision was made on the field tests of the Berkut in various climatic conditions. The winter stage of testing was carried out on the basis of the Tyumen Higher Engineering School. The group consisting of Yuri Artyushenko, Nikolai Lynnik, Georgy Ignatov, Vladimir Bazdyrev, headed by the deputy chief designer of OGK - 2 Alexander Ehnich and a representative of the customer, major of engineering troops Valery Razombeev, left the factory for testing.

Tyumen met a thirty-degree frost. From the airport, in the cold PAZIKI, we reached the village of the military on St. Andrew’s Lake, where the technical base of the school was located. The next day, inspected the equipment. No violations of the integrity of the hull and systems were found. The main stage of the test was to check the operability of the equipment and crew at low temperatures (on the day of the test, special sensors on the machine showed “-43 degrees."). For a start it was necessary to start the engine of the cooled car. The engine heater and transmissions of the machine had previously undergone similar tests on an underwater reconnaissance aircraft, so it worked without problems. After some time, the engine was launched, and the car from the parking lot with the crew and inspectors moved to the landfill.

The next stage of testing "Berkuta" was the path along a closed route, when the hatches of the car were battened down, and the movement was carried out using the navigation device TNA-3. The crew of the car was this: a mechanic – driver – sergeant of military service, the commander –– a representative of the customer Valery Razombeev and the third on the test was a member of the commission, a military doctor, who had to record the crew’s vital signs. The route was difficult, rugged terrain, covered with bushes and rare trees. Around deep snow. The habitable compartment of the machine had an air heater with limited power.

The duties of the commander was to determine the coordinates of the indicators TNA-3 and give the necessary commands to the mechanic – driver for movement at a given course. The commander and the driver could inspect the area in front of him only through triplex and negotiate with the "base" over the radio. The tests took place over 5 hours. The error on arrival at the specified point was only a few meters after the 30-kilometer march.

But there was an incident on the route! The doctor lost consciousness and he had to give help. In fact, he was a passenger, he did not see the road, and he was just seasick. When they opened the hatches on arrival, they saw that everything was frosty inside the crew’s breath. But people and technology did not disappoint.

During the tests were carried out firing a machine gun. Bushes were used as targets on a parapet enclosing a shooting range. The branches of the bushes scattered very effectively! After the winter phase, similar tests were carried out in Belarus, at the testing ground near Grodno, and in Turkmenistan, near Chardzhou. But on production machines such a system was not installed in most cases. 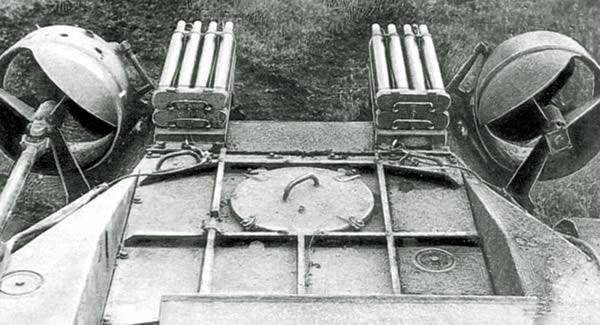 According to the test results, the 78A “Berkut” product was put into service by the engineering troops of the Soviet Army in 1980 under the name “engineering reconnaissance vehicle” of the IRM. 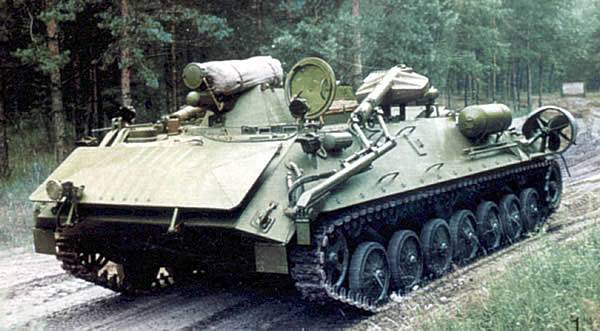 Later, according to the results of the war in Afghanistan, the car was upgraded: a second turret with a machine gun was installed to ensure firing in two directions. The car received an unofficial index IRM-2. Later in the turret (more precisely, the wheelhouse) left only a loophole for firing from personal weapons. Today, it is this version of the IRM that is in service with the engineering troops of the former Soviet republics. At the time of the collapse of the USSR, about 80 reconnaissance aircraft were released.

Educational poster nach.1980's, where one tower

Longitudinal section of the IRM of the TO for 1990, where two towers are clearly visible 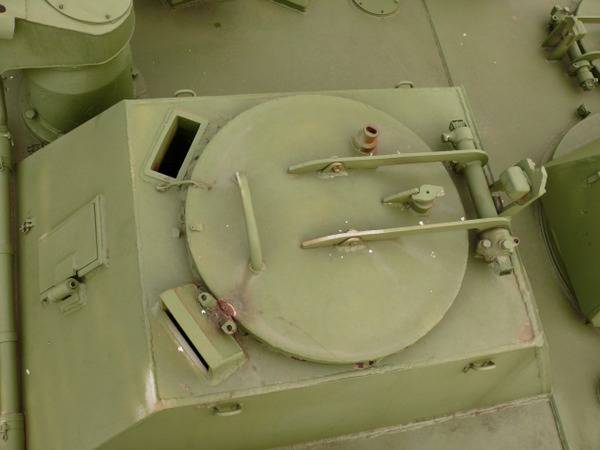 The biggest drawbacks of the machine include the fact that the IWW does not detect mines in a wooden and plastic case. Needs upgrading trawl, at least on the knife. Also, the IRM does not tolerate an explosive blast on a mine - the hull bursts along the weld seams, etc. After the Afghan war, the IRMs had a chance to make some war in Tajikistan, but there is no data on the effectiveness of the use of machines in this conflict. The latter fact of participation of the IWW in hostilities relates to the war in the east of Ukraine. 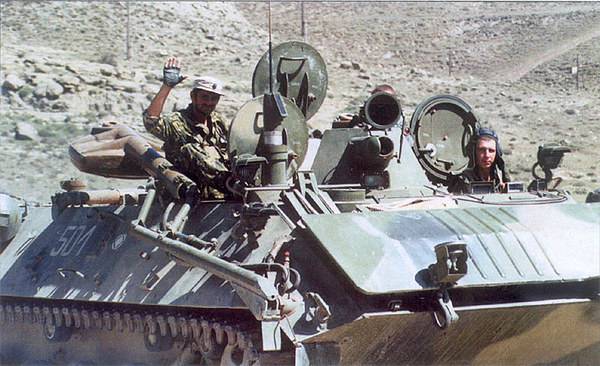 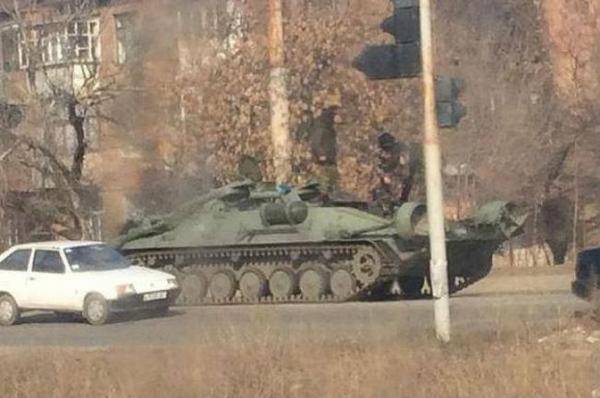 In Murom, recently in conjunction with the Moscow Higher Technical School. Bauman was designed trawl "Passage" (Information from the site strangernn.livejournal.). For the base machine was taken engineering intelligence IRM-2. This is a demining complex consisting of a shock trawl, designed for the MES. The machine works in the mode of remote control, wired or by radio. Of course, this is inapplicable in combat conditions, the radio channel will be easily crushed (and the bearing can also fly into the bearing), but it’s not worth talking about the reliability of a wired channel in a minefield. But in peaceful conditions or for "humanitarian demining", it is quite normal. The risk of death of the driver in the event of a meeting with abnormal power bomb is eliminated by the cavity. 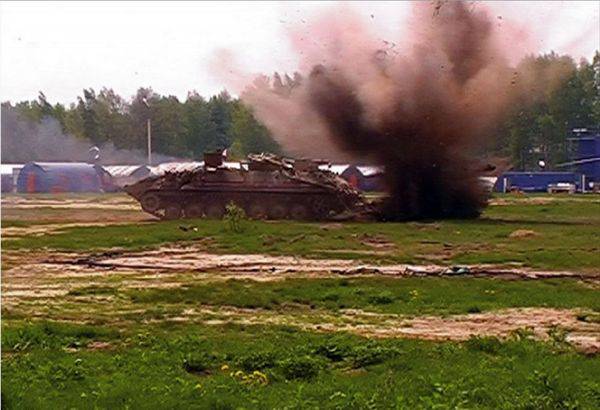 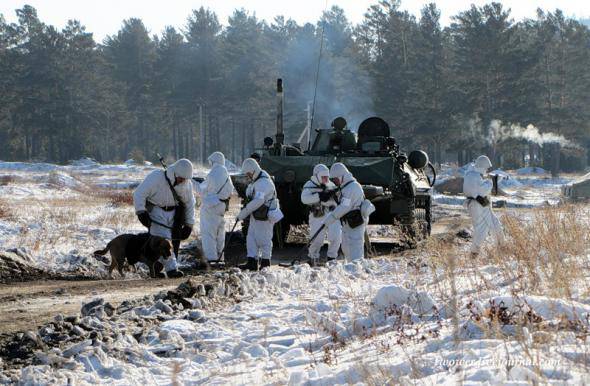 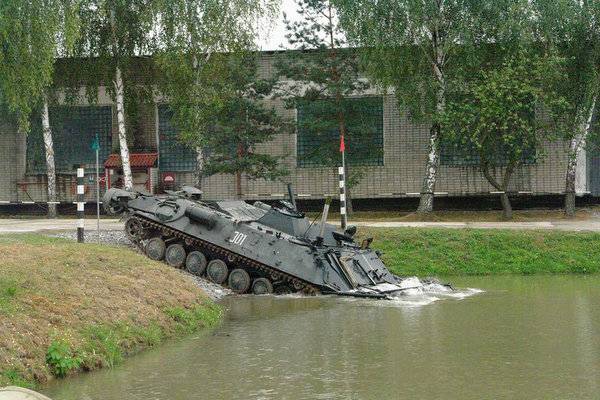 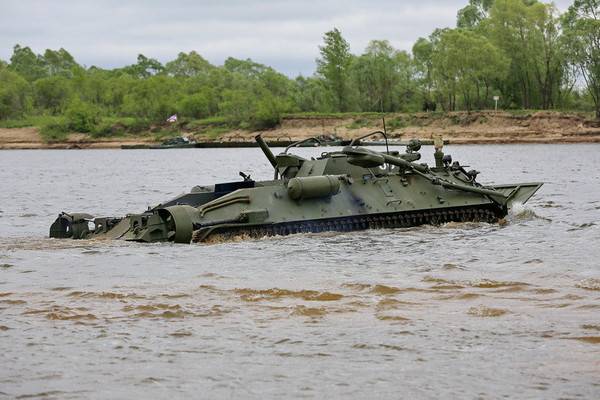 Also, in one of the entry points to the water, the width of the river is determined by the grid of the PIR-451 periscope or the DSP-30 device. When mines are found in the water, depending on the situation, a new section is searched for or demined. Demining is carried out only after the removal of the machine to the shore. The results of the exploration of a water barrier are recorded in the form of an engineering intelligence card, the basis of which is the profile of the main cross-section of the crossing. The use of IRM allows to reduce the time for exploration of water barriers in 1,5-2 times. 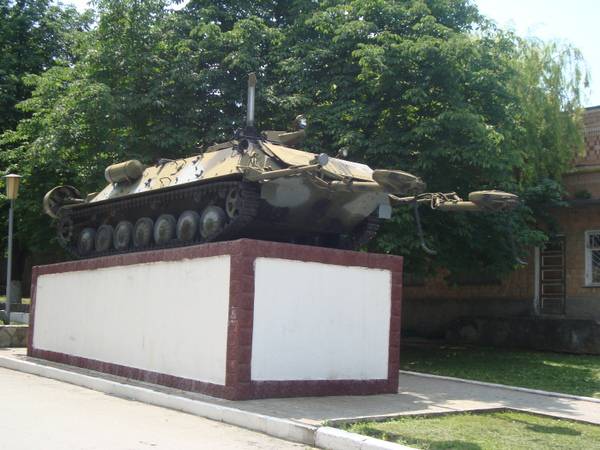 Tactical and technical characteristics of the IRM-2 "Beetle"

At the end of a few photos: 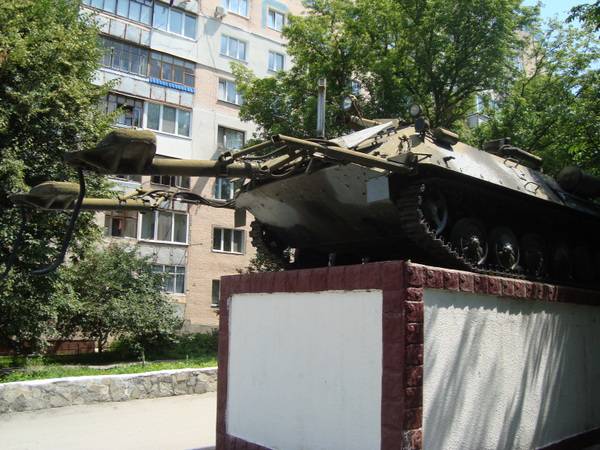 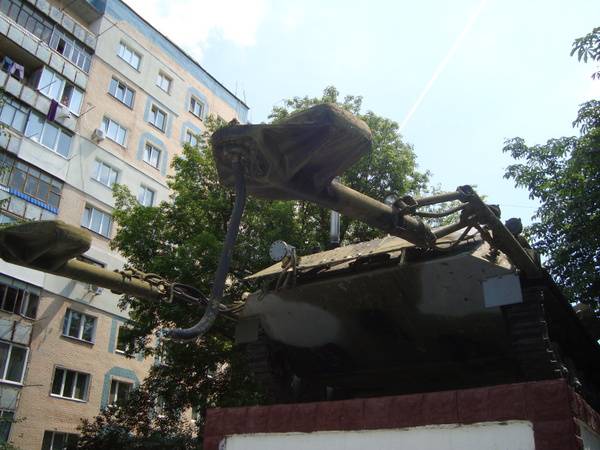 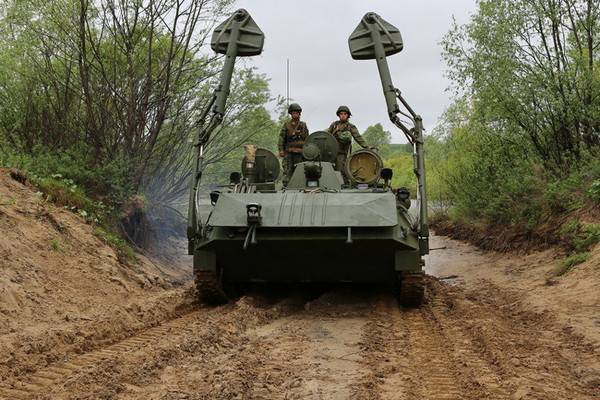 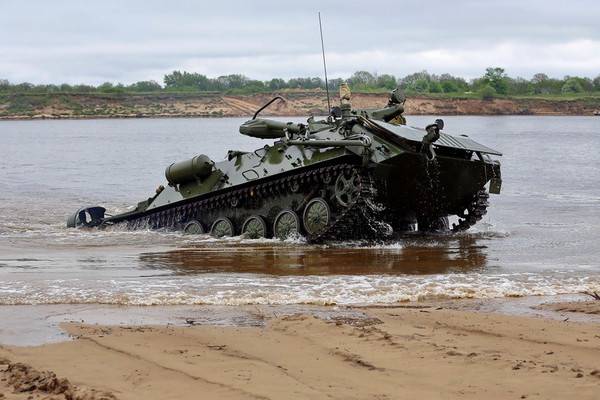 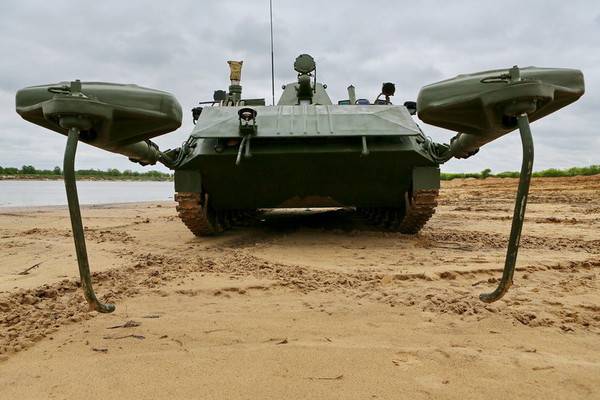 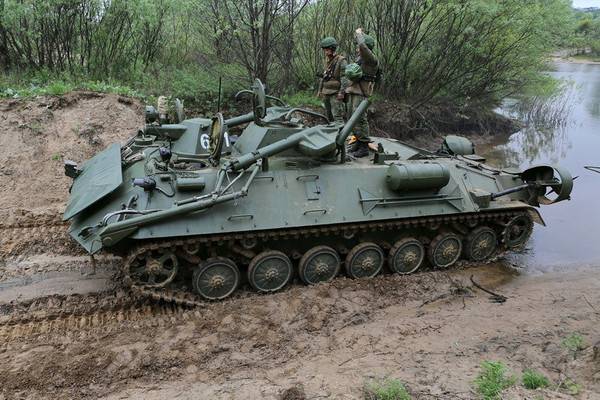 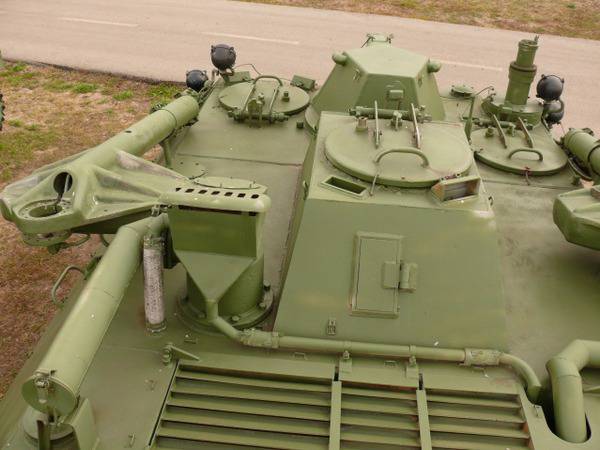