November 24, 2016
55
Something for a long time we have not addressed stories Ancient Egypt, interrupting our story about the pyramids of the Old Kingdom just on the three pyramids of the father Khufu - the creator of the most famous of all of us pyramids in Giza. And it is hardly surprising that the complexes are inherent not only to modern children, but in the past they have not been canceled. You think it is easy to be the son of the great Snofru - the Pharaoh conqueror, who left behind not one, but three pyramids. Well, so, if I don’t do more, ”his son Khufu could reason,“ at least I would build myself a pyramid that no one else had built for himself, and ... built it! 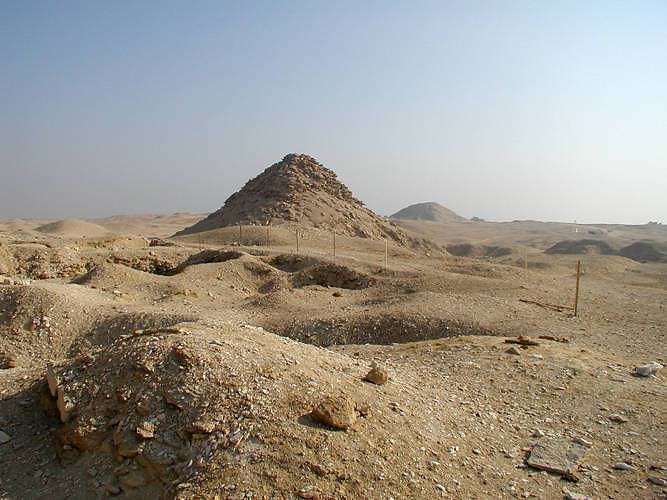 However, it should be remembered that the pyramids themselves were built and many other (!) Pharaohs of the Old Kingdom before Snofru and many of them have survived to the present day! And it is thanks to these not-so-well and to the surviving pyramids, we definitely know that they were intended precisely for the repose of the pharaoh's souls, and not for some other purposes. How do you know, someone impatient will ask us, and we will answer: the pyramids themselves, or rather, the Pyramid Texts found inside them "told" the scientists about this.

What it is? But that - the oldest literary monument of such a significant volume, which reached us from Egypt, and is a hieroglyphic text inscribed on the walls inside the pyramids of Pharaoh V of the Unis and such pharaohs of the VI dynasty, like Atoti, Piopi (or Pepi) I, Merner and Piopi (Pepi) II, located again in Saqqara. 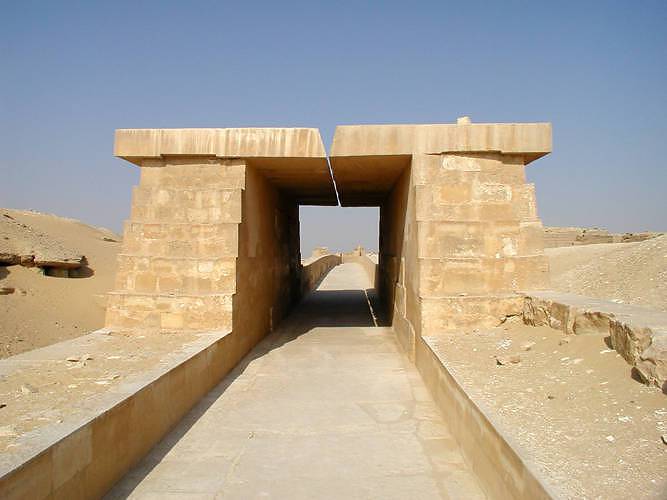 View of the cobbled road leading to the pyramid of Pharaoh Unis V dynasty.

What are these pyramids, let's start with this. So, Unis (and it was in his pyramid that the very first “texts of the pyramids” were found) ordered to build himself a pyramid in Saqqara called Nefer-sut-Unis - “The places [of rest] of Unis are wonderful”. It is quite small (67 × 67 m, and 48 m height), and it is located right behind the south-western corner of the fence, around the memorial complex of Pharaoh Joser. Today it is very badly destroyed - the top has rounded, the walls have burst out, the base is completely filled up with blocks that have collapsed from above, therefore it does not even reach half of the previous height. However, despite the strong destruction of the pyramid from above, its internal premises have been preserved very well and are allowed for inspection by tourists. 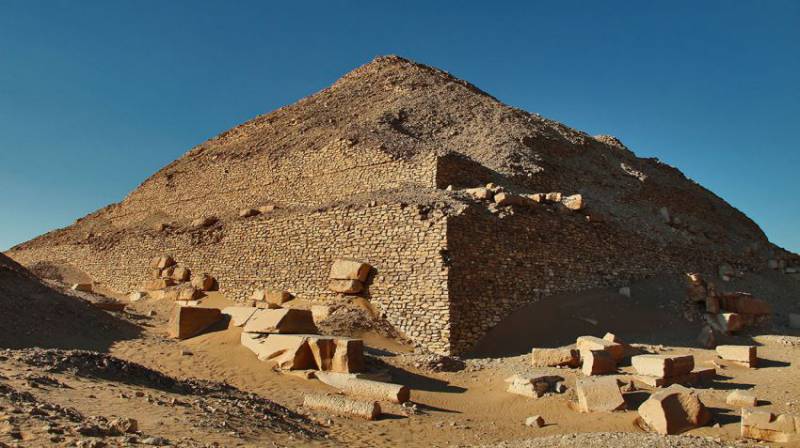 Anyone who gets inside is always amazed at what he sees. And he sees the walls of the burial chamber, from the floor to the ceiling, covered with the most ancient hieroglyphs, in fact, the most real extravaganza of these ancient written characters containing huge amounts of information. These are the “Pyramid Texts”, which are sacred documents compiled at the end of the 3rd millennium BC. priests of the city of Heliopolis, although, judging by their content, some of them belong to even more ancient, pre-dynastic times. 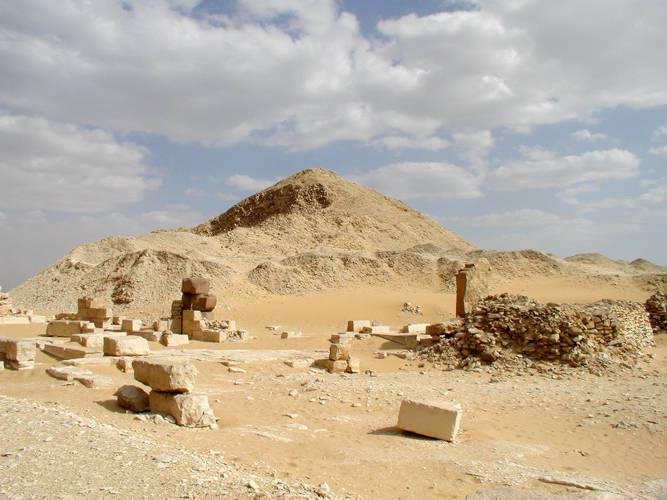 As you can see, little remains of the pyramid of Pepi II.

Before this burial chamber covered with hieroglyphs under the Unis pyramid, one should get through the northern wall down the long aisle that French archaeologists dug up shortly after the discovery of this monument. 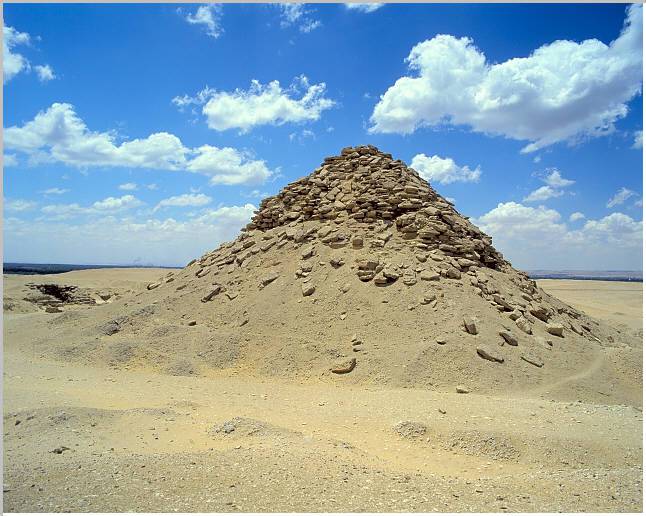 Pyramid of Userkaf - the first pharaoh of the V dynasty altogether resembles a pointed hill.

The chamber itself is composed of two small rectangular rooms, which are separated by a wall with a low door opening. Both rooms are overlapped by a gable ceiling, decorated with images of the stars of the beloved Egyptians in blue-green. The tomb's area is equal to 7 × 3 m, the ceiling has a height of 6 m. The massive Unis sarcophagus, made of black granite, is located near the western wall.

However, his pyramid with the texts on the walls is far from the only one, that is, over time, the writing on the walls became fashionable, and then this “fashion” passed. In the necropolis of the Pharaohs of Memphis, built somewhere in the period between 2350 and 2175. BC Oe., except for Pharaoh Unis (middle of the XXIV century. BC. e.), four such pharaohs as Aunt, Piopi I, Merenra, Piopi II, and Neferkar (XXII century BC) were also buried. That is, the pyramids, in which these “Texts” were inscribed on the walls, were built over a century and a half! 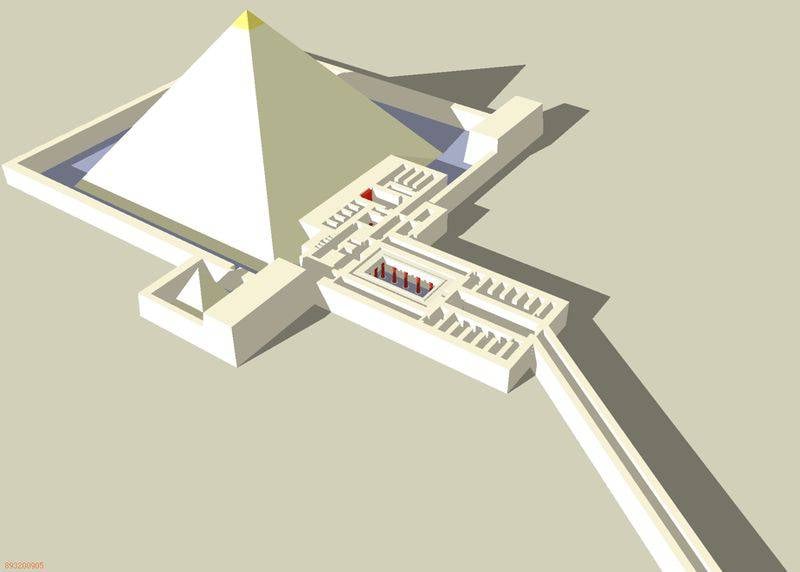 And this is how the Pyramid of Niuserra and its entire funerary complex could look immediately after construction.

Archaeologist Maspero discovered them in 1880, and then for many years they were copied, translated and published. Moreover, it was these texts that became the initial foundation for the study of the Egyptian language, religion and culture, on which all further Egyptology grew. But besides this, they are also a very important monument of universal significance. Why? Yes, because it is perhaps the most ancient work of religious literature in the world. They contain ancient funeral rituals or, more correctly, a set of certain magic formulas and corresponding sayings, which were supposed to enable the departed king to achieve immortality in the next world. It was in the “Pyramid Texts” that the scientists found the first link of that indissoluble chain of funeral magical rituals, which passes through Egyptian pagan civilization and even partly Christian. That is, here we very clearly see those ideas about the funeral world that the ancient Egyptians were guided by, burying their kings here. 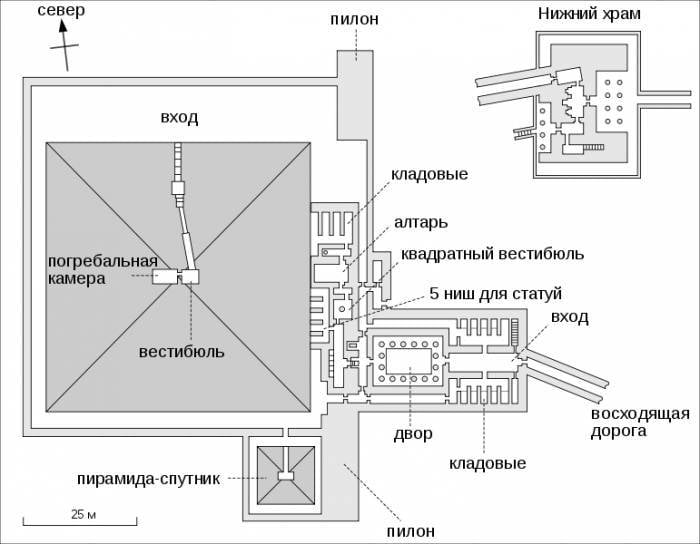 For it is perfectly clear that no one would write the requiem texts on the walls, say, of the same breadbasket or in the repository of ancient secrets. No, in the pyramid texts there are no references to aliens from space, neither Atlantes, nor the inhabitants of the mainland Mu or the ancient Hyperboreans - "people from the north." There is nothing there. Speech in the pyramid texts is about what the departed Pharaoh (name) has to say, at the court of Osiris, what the carrier needs to say across the river of the dead, in a word, everything that an ordinary person cannot remember, but ... if he is literate, he can easily read ! 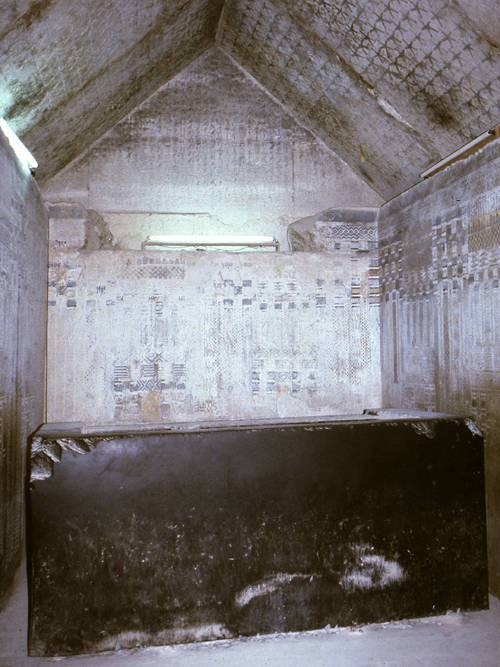 One of the burial chambers of the pyramid of Unis.

Interestingly, in different pyramids, “Pyramid Texts” differ in their volume. So, in the pyramid of Unis, they contain 649 strings, in the Atoti pyramid - only 399, in Piopi I there are more than 800, but in Piopi II - almost 1400. Many of the sayings tend to be repeated in two or more pyramids, which is not surprising. Total 712 sayings of different lengths were found, ranging from just one phrase to texts of a relatively large volume. For those who are familiar with such works of other nations, it is easy to find here many familiar features: these are various conspiracies whose power is connected with belief in the power of a word, remnants of totemism, that is, when a person, knowing the names of the creatures with which his afterlife well-being, calls them, after which they can no longer harm him. There are also curious references to stories from the life of the gods, hints of some myths, very often incomprehensible to us, because they did not reach us, finally, the “reminders” about how to correctly pronounce certain words and not confuse anything! 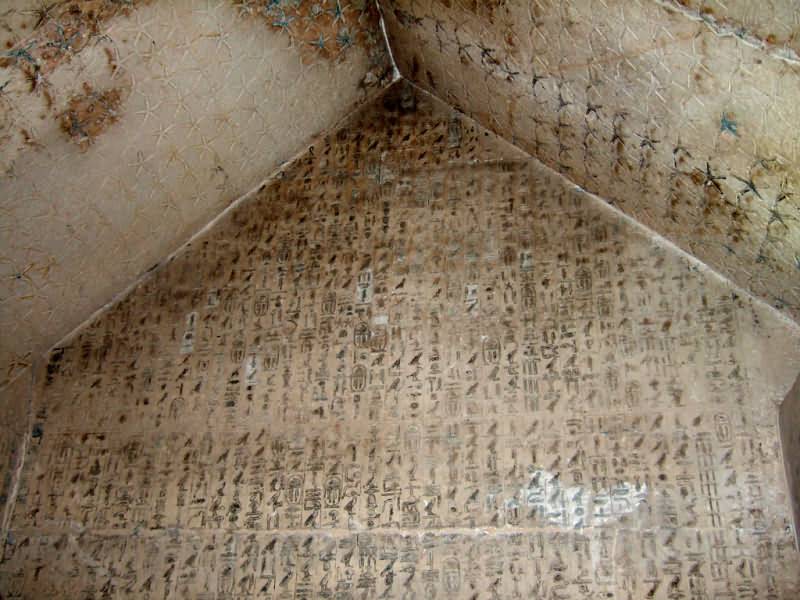 Here they are - "Pyramid Texts".

There are formulas that should be followed by funeral rites, incantations against various demonic entities, animals and people who are at enmity with the dead king, and, of course, prayers to the gods with requests to provide their departed patronage. It is difficult to study texts, since they are written not just with hieroglyphs, but with archaic language and spelling, specially adapted for writing magical texts. For example, their authors tried to avoid hieroglyphs that depicted living creatures that could harm the late king, even if they were only carved in stone. The green color of the written hieroglyphs was also the color of the resurrection, that is, in these texts there was not a single trifle that would not act in the interests of the pharaoh who had found his last refuge under this “mountain of stone”. 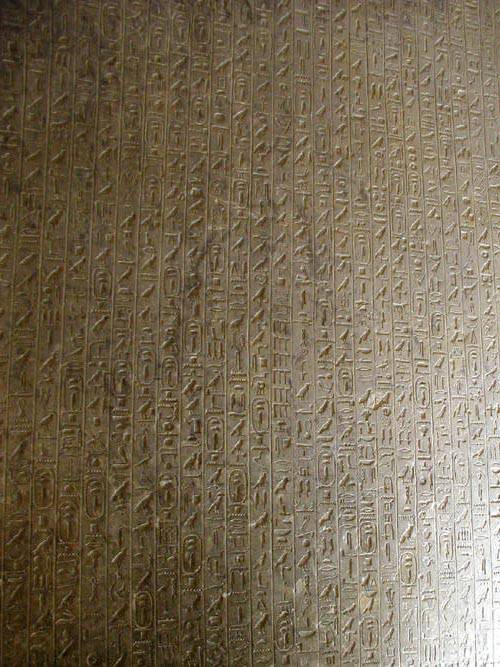 The wall in the pyramid of Pharaoh Aunt with the Pyramid Texts carved on the stone.

The first "texts of the pyramids" tried to decipher himself Gaston Maspero, with 1882 year began work on their translation and publication. Later they were all published in one volume in 1894. In 1910, Kurt Zete took over the work, not only carrying out the publication of “Texts”, but systematizing them into groups, and scientists have been using its numbering of texts up to now. The Russian translation was started, but not completed by the Russian scientist A.L. Kotsiyovsky, a student of the founder of the Russian Egyptology - BA Turaeva. So now, the fully completed translation of the Pyramid Texts in Russian, alas, does not exist. But in 2000, a book was published with that part (chapters 1-254) of the texts that he managed to translate. 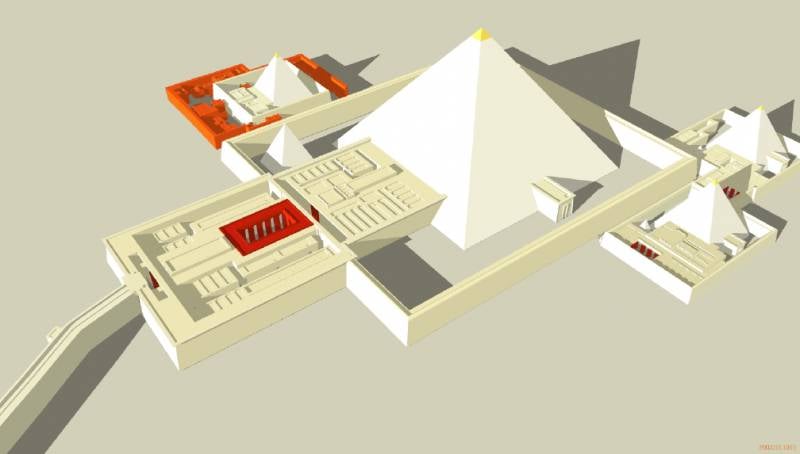 Reconstruction of the necropolis of Pepi II.

Why did the “Pyramid Texts” appear and why did they disappear from them afterwards? Perhaps their builders thought that only the pyramids themselves were not enough to gain them the king of eternal life? But why, then, were they discarded from their mark? What is this ancient rationalism or something else that we do not yet know about the spiritual life of the ancient Egyptians? 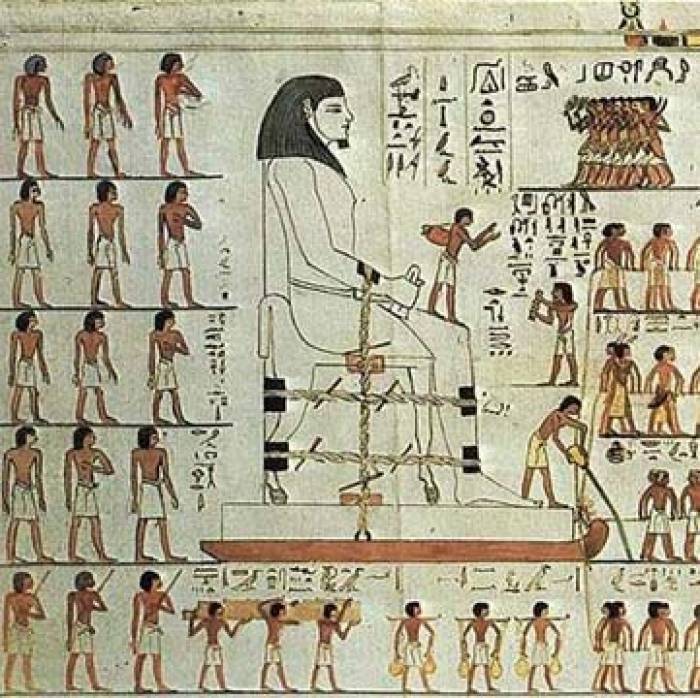 So, judging by this image on the wall of one of the tombs, the Egyptians and transported from place to place huge stone statues. And who prevented them from transporting stone blocks for the construction of the pyramids in the same way?

Interestingly, the texts in the tombs of the nobles of the Pharaohs almost never changed in content. The essence of them - a continuous boast in his address and a description of useful acts for which the deceased praised Pharaoh. Thus, the biographical inscription in the tomb of the grandee of Una, who was a contemporary of Pharaoh Piopi I, we learn about the Egyptian military campaigns in the land of Palestine. She reports that Pharaoh mobilized warriors throughout Egypt from the Elephantine island to the Delta inclusive. In addition, he strengthened his troops with auxiliary detachments from Northern Nubia and Libyan mercenaries, after which he sent all this considerable army under the leadership of Una against the kheruisha Bedouin tribes (literally “those who are in the sand”) in the Sinai Peninsula and in the desert regions of South Palestine. The expedition ended in complete success, which we can judge by the following victory song of the Una warriors: 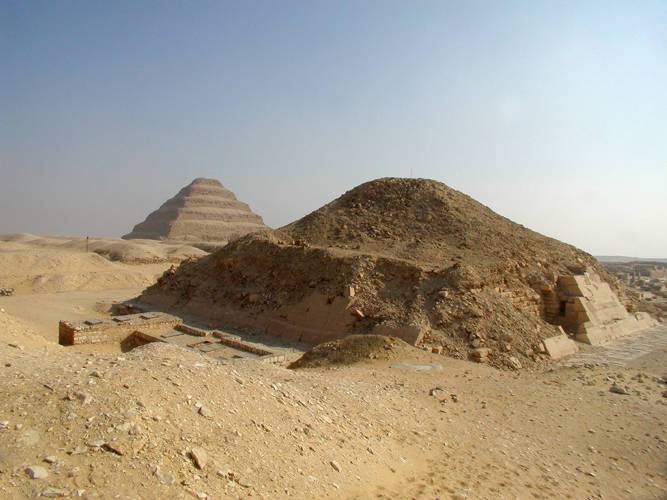