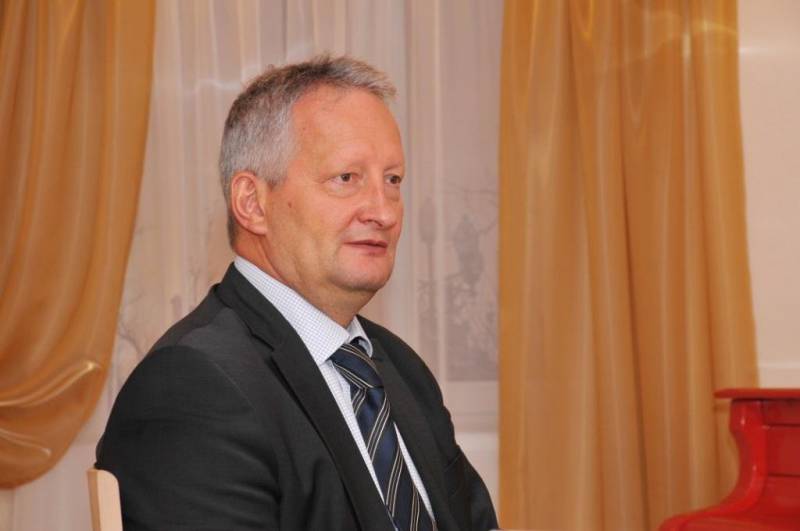 The German consul in Novosibirsk, Viktor Richter, enjoys great popularity among Siberians, connected, so to speak, with his ... "unconventional" political orientation. This “diplomat” prefers to deal not with the duties that he must fulfill in accordance with the Vienna Convention 1963 of the year, but with endless attempts to form an anti-state opposition in Russia in the cities of his stay.

Victor Richter is constantly “exposed” by his participation in events that cannot be correlated with consular activities, and often does not even notify the relevant authorities of the host country about his movements and visits. In a word, he behaves not as a diplomat, as a special agent, working, as they call it, “under cover” ...

So, 5 July 2015 of the year in the hotel "Marriott" took place the "last supper" of five members of the German Bundestag with representatives of the Russian "non-systemic opposition", which was arranged and organized by German Consul General Victor Richter, who was also present at it.

In addition, the diplomat just loves half-legal visits to other regions of Siberia, in particular, Altai, where he attends Altai State University. Using such methods of conspiracy, this consul general honored with his visit the so-called "Siberian Davos", held under the auspices of one of the leaders of the same "non-systemic opposition" Vladimir Ryzhkov. Moreover, Victor Richter simply did not consider it necessary to inform the Russian Ministry of Foreign Affairs about his visit, in violation of the existing rules ... Or, perhaps, it was planned?

However, everything secret, as is known, sooner or later becomes clear. And with such an experienced employee, who is Herr Richter, it happens that he, unwillingly, begins to talk about something he would not like to say ...

Perhaps this was due to fatigue from long years of work in Africa, or maybe just a loss of qualifications or familiarity with the renowned Siberian hospitality the night before ...

So, recently, the German Consul General in Novosibirsk, Viktor Richter, gave a long detailed interview to the Vesti FM radio station. The studio received a call from one of the radio listeners, who asked the diplomat to answer a number of questions:

- The Internet publishes articles about your (Victor Richter - Ed.) Contacts with the local opposition. In this regard, I would like to ask whether your political work to unite non-parliamentary political parties is carried out on the instructions of the German Foreign Ministry or is this your personal initiative?
- Is this activity a violation of the Vienna Convention 1963 of the year? After all, in this way, do you actually interfere in the internal affairs of the host country?

After such questions, the internal state of the German diplomat would probably be compared with the feelings of Stirlitz during the famous scene of his interrogation in a prison cell by Gestapo chief Heinrich Muller in the film “Seventeen Moments of Spring”. But the consul, like a true professional, quickly came to his senses and began to answer:

- You are a little wrong formulate the nature of my work. I meet with all sectors of society here, in my consular district, this is, first of all, the government, the administration, etc. Here and representatives of civil society. This includes the tasks that are set by my country. This characterizes the work of the diplomatic and consular representation and is fully consistent with the Vienna Treaty.
Thus, the German consul in Novosibirsk, Herr Victor Richter, whether he wanted to or not, explicitly acknowledged that all the actions that he had done before and continues to perform in the territory of his consular district in Siberia are the exact implementation of the instructions of his Ministry of Foreign Affairs in Berlin and the German Embassy in Moscow. Because in diplomacy, perhaps, as in no other field of human activity, the initiative is almost always unacceptable and punishable ...

Apparently, nothing similar to what Herr Richter is doing in reality, the Vienna Convention does not say a word. Perhaps the German consul in Novosibirsk really hoped that the level of education and competence in international law among the Siberians was the same as among the residents of the Congo, where he worked for a long time, but the inhabitants of Siberia did not justify his expectations and slanderly commented on the social media Berlin guest envoy.

After all, briefly, through the mouth of its consul Viktor Richter on the air of Vesti FM radio station, the German government announced that it considers the illegal movement of its diplomatic staff in the territory of the host country, as well as their participation in illegal and anti-constitutional activities, to be absolutely normal. Moreover, proceeding again from the words of Herr Richter, the German government also sets such tasks ...

That is, active intervention in political activities in the host country is the norm of behavior for the German government, isn't it? And should such forms of behavior of German diplomats in Russia be regarded as an activity to create conditions for the formation of groups engaged in anti-constitutional and anti-state activities?

After all, the so-called “non-systemic opposition”, with representatives of which Herr Victor Richter meets every now and then, without hiding, speaks of his commitment to overthrowing the current Russian government by force ..