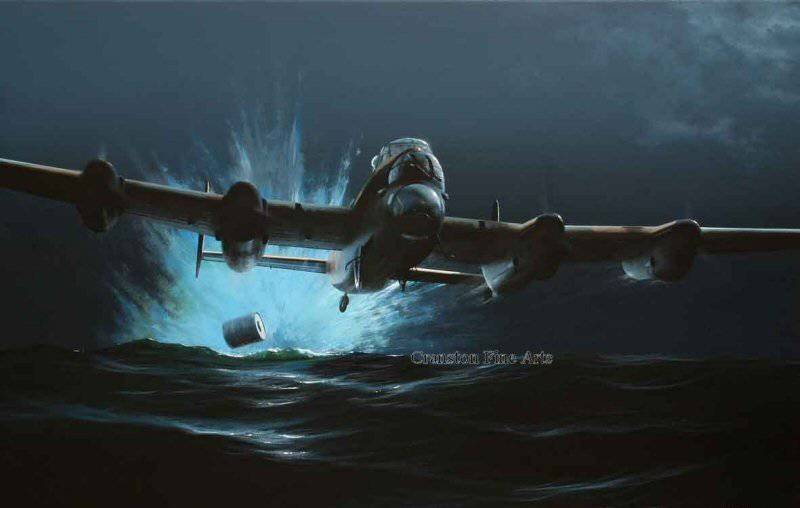 Dr. Barnes Wallace spent the last peaceful night at his cottage in Effingham, and in the morning, like all British people, he heard Chamberlain’s rather strange speech. What can he, the Vickers aircraft designer, do to reduce the war? Original ideas one after another visited his head. Wallace thought WHERE and HOW the bombardment could cause critical damage to Germany. Military production dispersed, they can not be destroyed by a single blow from the air. But maybe there are key points?

Coal mines! Roadways and tunnels hundreds of meters underground are invulnerable. Bombs will be able to bring down only the shaft of the mine, along with a lift, but the destruction can be quickly restored.
Oil! Ploiesti oilfields outside the coverage of British aircraft. German ersatz gasoline manufactures are numerous and well protected. Also a dubious target.
Hydroelectric power stations - "white gold"! In Germany, there are 3 dams - Meun, Eder and Sorpe. All in the Ruhr industrial area, they fully provide this huge industrial complex with water and energy. German industry requires 8 tons of water to produce 1 tons of steel.

Myung Dam forms a lake, maintaining the water level so that barges of ore and coal can freely approach the factories. The volume of the lake is more than 130 million tons of water. The Eder dam locks the river of the same name, creating the Eder reservoir. Zorpe forms a lake on the tributary of the Ruhr.
The dams are colossal. Myung 34 thick meters at the base and 8 meters on the ridge, has a height of 40 meters. The 500-pound bomb barely scratches the concrete. The dam of Zorpe is no less strong, although it is composed of soil. Two huge earthen mounds are fortified in the center with a concrete wall.
Breaking through the dams will not only destroy the hydroelectric power station and deprive the plants of water and electricity. Huge masses of water rush down into the valleys, sweeping away on their way highways, bridges, railways.

Huge dams can not be damaged by conventional bombs. Even with a direct hit, you need a huge charge of explosives (according to calculations up to 30 tons), none of the existing RAF bombers will pick up such ammunition. But the required power of the charge can be drastically reduced by correctly positioning it in space.

First, the entire volume of water locked in the reservoir presses against the dam and keeps its structure in a stressful state. Concrete works well in compression, but does not resist tensile well.
Secondly, in an explosion, water behaves like an incompressible medium. If the charge is eroded at the optimum depth from the pressure side of the dam, then a significant part of the shock wave will not dissipate in space, but will go into the wall, causing irreversible damage. Further, the water flows finally blur the dam.

Everything is fine, Wallace thought ... but there is one serious problem. Myon, Eder and Zorpe were protected by anti-torpedo nets, which meant that the bomb must be precisely placed in a narrow strip of space between these obstacles and the wall of the dam (which is almost impossible) or look for another way.

The motor refused to fly to Stuttgart and the Lancaster could not maintain altitude. Guy Gibson lost his order, but remaining on the same course. Over Stuttgart, he gave full throttle to 3 motors and, bombing on target, rushed back under cover of night, snuggling to the ground. It was Gibson's 173th sortie. He had the rank of lieutenant colonel aviation and Victoria Cross for flying merit. He was 25 years old.

On the same day, Guy Penrose Gibson was summoned to a meeting with Ralph Cochrane, the Vice-Marshal of Aviation.
“First of all I want to congratulate you on the new buckle to your order, Lieutenant Colonel.
- Thank you, sir.
- I can offer to make another flight.
Gibson shrugged and said a little tiredly:
“What kind of flight, sir?”
- Very important. Now I can not say anything. Unless: you will command the operation.
Gibson slowly replied:
- Yes ... I think so, sir. 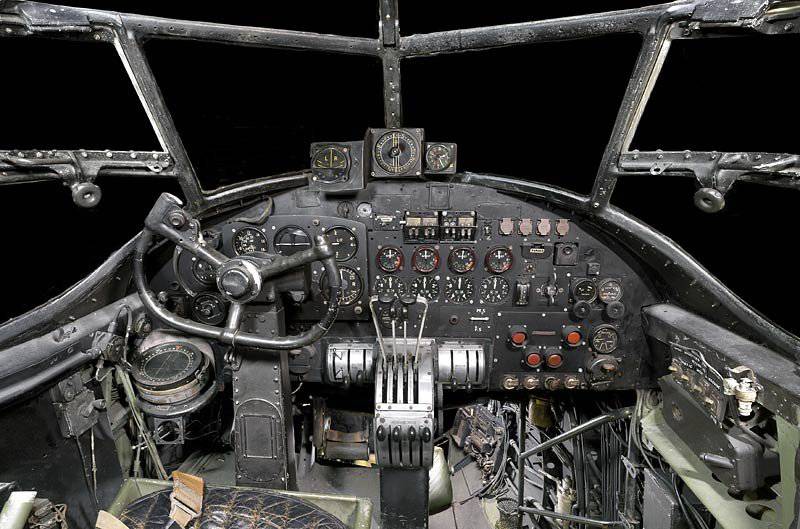 So in March, 1943 of the 617 Squadron RAF appeared - a selective bomber squadron that sank Tirpitz, destroyed the Saumur railway tunnel, bombed German bunkers, imitated a sea convoy, and of course, Chastise, which is being discussed today.

In the 1943 year, a plan for the destruction of German dams from the air was created based on the calculations of Barnes Wallace. Dr. Wallace solved the puzzle, watching the children play, forcing the stones to jump on the surface of the water. To achieve a similar effect, the bomb should have been spun on board the Lancaster - after dumping, jumping several times on the surface of the water, she easily crossed all the anti-torpedo barriers, and then, ricocheted from the surface parapet of the dike, fell into the water on the pressure side. 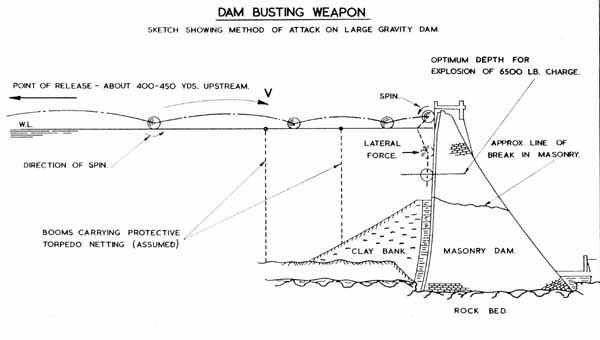 Such a plan, in turn, gave rise to new problems. According to the calculations, the bomb must be reset from a height of exactly 18,3 m, the distance to the target at this moment is 390 meters, and the speed is 240 miles / hour. Lancaster has flown that distance in 4 seconds!

The discharge distance was determined simply: the width of the dam was known (it was determined from aerial photographs), which made it possible to manufacture the simplest optical range finder.
The definition of height was more difficult. Conventional means — barometric or radio altimeters — were not suitable for this — the flight altitude is too low. Found a brilliant solution: in the nose and tail of Lancaster 2 spotlights were installed, directed one - vertically down, the second - at a certain angle to the vertical, the rays intersected at a distance 18,3 m from the aircraft. During the flight, the searchlights gave two spots on the surface of the water and the pilots corrected their altitude. When the spots merged, the required height was reached.

After training, the 617 Squadron pilots managed to withstand the required height on the combat course without much difficulty. But the pilots did not feel great joy. When the plane enters a well-protected object at an altitude of 60 feet, the crew is very much at risk. And with the included spotlights ...

The original Vickers Type 464 bomb (also known as Upkeep) was a cylinder, 1,5 meter in diameter and tons of 4 in weight, of which Torpex was 2997 kg. Before dropping the bomb spun up to 500 rpm.

16 May 1943, the reconnaissance Mosquito came back with fresh pictures of the dams, the water in Men was only 4 feet from the ridge. The reservoirs were completely filled after the spring thaw. A moonlit night will help the pilots to find the target. 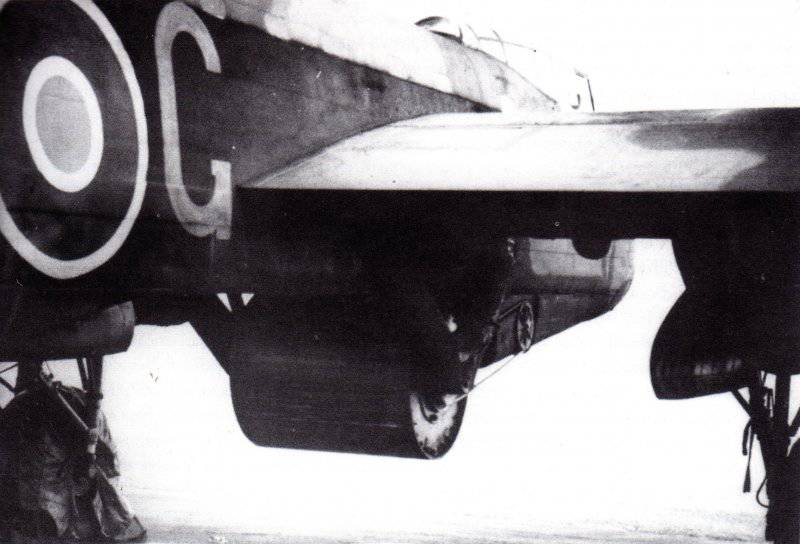 Exactly at 21.10, the first five Lancaster went off. Total that night on the mission 19 bombers took off. Each carried a strange ammunition and 96 000 ammunition caliber .303 British. The shores of England were slowly melting behind.
The planes flew to the target at low altitude in open systems. The flight route went around the famous anti-aircraft artillery positions and night fighter airfields. However, the planes Barlow and Byers did not reach the target. No one knew where their anti-aircraft guns had shot down.

The leader’s crew was the first to attack the Myon Dam: the bomb successfully rolled onto the pressure side and exploded there. The dam has withstood. The target covered approximately 10 anti-aircraft guns, but Gibson’s Lancaster did not receive damage.

After the water in the lake calmed down, the crew of Hopgood went on the attack. Suddenly a red flame bloomed on the left wing tank, and a fiery trail reached behind the Lancaster. Looks like the scorer was killed, the Upkeeper bomb flew over the parapet and fell to an electrical substation. The plane frantically lifted its nose, gaining height, but a terrible orange flash swallowed the Lancaster, its wings flew off, and the flaming fuselage slammed into the ground, burying the pilots.

The third bomber got two shells in the wing, but was able to put his Upkeep exactly on target. A new explosion shook the dam. The lake boiled, white in a column of water shot up hundreds of meters in height. When the water calmed down, the dam was still standing. 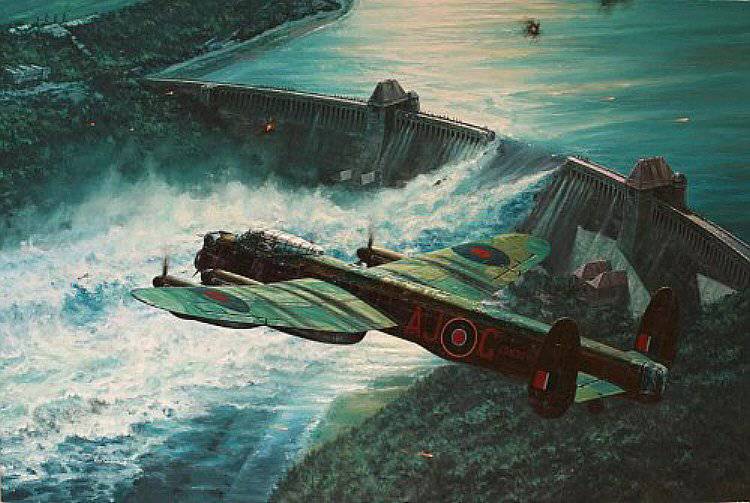 The fourth "Lancaster" went on the attack. The crew of "A Apple" achieved a direct hit, but the dam withstood the blow this time.
Finally, the Matlby crew went on target. At this time, the aircraft freed from the bombs circled over the positions of anti-aircraft gunners with the included searchlights and side lights, trying to divert the attention of the Germans. When the water wall had subsided, the concrete body of the dam suddenly cracked and disintegrated under the pressure of water. Millions of tons of water, foaming and hissing, rushed through the hole, multimeter water shaft rushed down the valley, sweeping away everything in its path.

The remaining aircraft were retargeted to the Eder dam. The dam lay in the folds of the hills, which made the attack even more difficult, worse, there was fog in the valley. With six visits, the pilots could not hit the target. On the seventh call, the bomb worked without delay and the attacking Lancaster was destroyed by an explosion. The next attack was fatal for Eder. 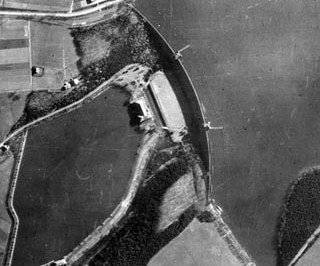 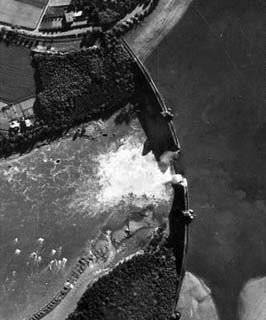 Worse things were in the second wave, attacking the dam "Zorpe". Only the fifth bomber managed to attack the target, but unsuccessfully - there were no holes. Three emergency aircraft were called up urgently. After several attacks, the pilots achieved the hit - the dam cracked, but still survived.
The two remaining reserve aircraft were sent to the reserve targets: one unsuccessfully attacked the Ennerpe dam, the second aircraft was shot down by anti-aircraft guns. 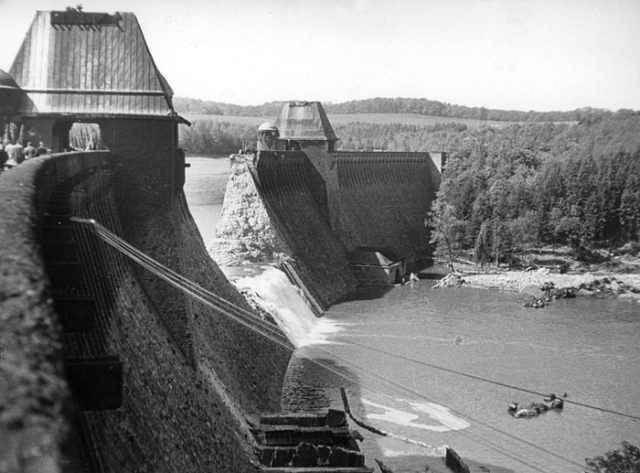 The dams were quickly restored, but not because the damage was small. Urgent repairs only underscore the importance of dams for Germany, all the necessary human and material resources were immediately removed from other objects.

“Big whipping” (Chastise is translated in this way) became a legendary operation of the Second World War, during which the pilots of the Royal Air Force showed their professionalism and desperate courage. 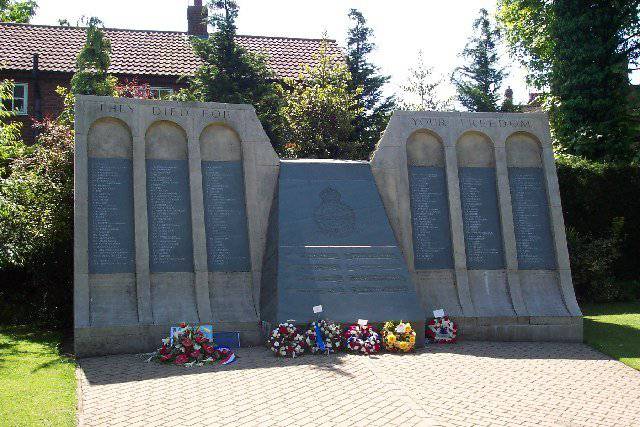