November 15 2016
39
Blog chervonec_001 published another summary of the military officer "Mag" about the situation in the Donetsk Republic. 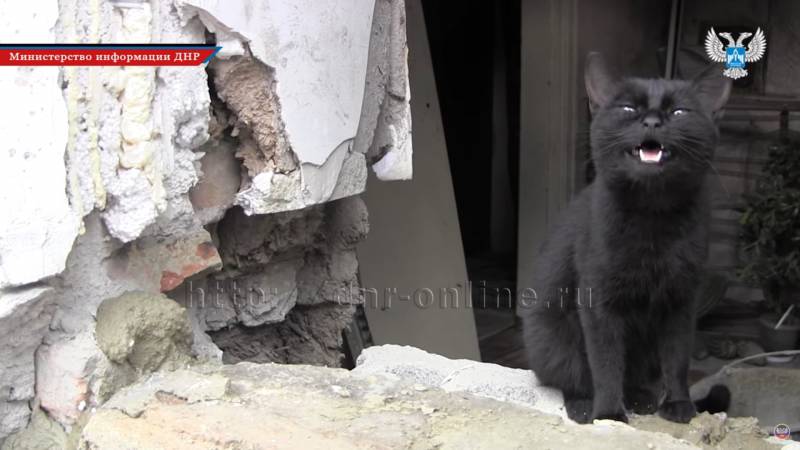 07.11.16, monday.
07: 50 Several 120-mm mines fell west of Gorlovka. 13: 00 began positional battles and shelling in the area of ​​the YaBP, all types of weapons are used.
13: 00 began positional battles and mortar shelling north of Gorlovka in the Zaytsevo region.
15: 00 in the YaBP area increased shelling. According to our positions, several mortar and art batteries work at once.
16: 15 began a massive shelling of mines and shells of Yelenovka and the western suburbs of Dokuchaevsk.

Ukrainian military 1st tank Companies of the 36th Separate Marine Corps, while intoxicated, stole a tank from the location of the company. Then we went to the store in the village of Zarya (Volodarsky district, near Mariupol), while in the center of the village we hit a civilian car in which there were three civilians who died from their injuries on the spot.

17: 00 APU with 152-mm guns opened fire on the northern suburbs of Donetsk. Civilians sit in basements.
19: 00 Airport - Spartak - YaBP For six hours, heavy fighting and shelling continued, without any attempt to attack or break through. APU without a break, use mortars and artillery.
19: 00 artillery DNR began to give a powerful response at the same time on several sectors of the front.
21: 00 mortar and art duels have been going on for two hours now. The main hot sections of the front are Airport - Spartak - YaBP.
21: 20 on the approaches to the Petrovsky district of Donetsk began a positional battle and mortar attacks.
21: 20 north of Gorlovka also began positional combat and mortar fire.

Late in the evening, an attempt was made to break through the assault group of the Ukrainian Armed Forces in the Petrovsky district to the west of Donetsk. As a few weeks ago, this attempt also failed. The APU suffered casualties: 9 soldiers died, 15 injured, mostly shrapnel wounds and contusions. The fighting continues in this area of ​​the front, mortars and self-propelled guns of the Ukrainian Armed Forces cover the waste of the wounded.

Our intelligence recorded the transfer of militants of the Right Sector (banned in the Russian Federation)) to the village of Pravdovka (18 km from the front line) in the number of 150 heads, and also a unit of the National Guard in the village of Georgiyevka (8 km from the front) in the number of 300 heads. According to the DPR intelligence, the radicals drove people to the streets and, under the threat of execution, were forced to shout out nationalist slogans.

8.11.16, Tuesday.
Hot week continues, until the morning shelling did not stop, although their intensity decreased.
03: 30 Several 120-mm mines flew through the Airport.
03: 40 repeated shelling of the Airport.
04: 00 again shelling the airport.
08: The 00 heavy artillery of the Ukrainian Armed Forces woke the residents of Makeyevka and Yasinovataya. The shelling was conducted on the ABM.
09: 00 short battle and shelling of the Airport - Spartacus.

The scandalous incident that caused the loss of a unit of military equipment and the death of servicemen, again occurred in the APU. In the afternoon, in one of the tank units of the Ukrainian army stationed in Avdiivka, shooting exercises were organized, which were conducted outside the city, in the field. At first, everything went according to plan. But suddenly there was an explosion on one of the tanks. When the smoke cleared, the bewildered Ukrainian tankers from other tanks saw that the gun was completely torn up on the fired combat vehicle. This could only mean one thing: the projectile exploded right in the barrel.
Of the three crew members, two died.

11: 10 came under attack from an OSCE mission in the area of ​​the village of October.
12: The 05 of the APU is bombarding our positions on the YaBP with 82-mm and 120-mm caliber mortars.
15: 00 battles and shelling on the YaBP intensified. Three hours of shelling with mines and shells go almost without a break.
16: 20 north of Gorlovka, in the Zaytsevo area, the Armed Forces of Ukraine are conducting chaotic and un aimed fire from BMP and machine guns. Simply burn the BC for a tick in the reports.
17: 00 battles and shelling continue along the airport-Spartak-YaBP front line.
17: 10 began the evening battles and mortar shelling west of Petrovsky district.
17: 10 APU began mortar and artillery shelling of the checkpoint "Elenovka". From Dokuchaevsk there are reports of artillery shells entering an apartment building. A woman 1949 of birth was hospitalized with multiple shrapnel wounds. Civilians and personnel were promptly evacuated from the shelling zone.
17: 35 between the positions of the NPT and the APU in the Zaytsevo area, positional battles have been going on for an hour and a half already, shooting, mortars and infantry fighting vehicles are being used.
18: The 15 bombardment of the Elenovka checkpoint has stopped, the APU fired more 50 mines and shells in the vicinity of the checkpoint.
19: 00 our gunners respond in the west and north of Donetsk.
19: 30 west of Gorlovka in the Broad Beam area, the battle began. First, the memory worked, then joined the AGS and mortars.
20: 00 along the entire front line from the south - Cominternovo and Sakhanka and to the north - Gorlovka and Zaitsevo, positional, mortar and artduel fights continue. Over the roofs of houses flies from all sides.
20: The 15 APU fired an incomplete package of missiles from the Grad MLRS in the western suburbs of Donetsk.
21: 00 battles west of Donetsk continue, shooting, mortars, grenade launchers are used.
22: 00 south of Donetsk in the Dokuchaevsk region, the battle and artduel continue.
22: The 00 APU began a heavy bombardment of the positions of the DPR in the Zaitsevo area.
22: 30 west of Gorlovka in the area of ​​Wide Beam is fighting using heavy artillery.

In the morning sniper pairs worked on both sides. It was mostly quiet.
11: 00 under shelling village October.
12: 45 under shelling AGS and BMP western suburbs of Dokuchaevsk.
It was also relatively quiet during the day.
17: 00 south of Donetsk - Elenovka and Dokuchaevsk, Airport, Spartak, YaBP, Gorlovka - positional battles everywhere and heavy mortar attacks.
17: The 50 APU began to move with infantry and equipment south-west of Gorlovka in the area of ​​the Red Partisan. Fighting ensued, while without mortars and artillery.
18: 30 BLAH APU flies over the western and northern districts of Donetsk. Air defense DNI works on them from the memory.
18: 47 over the Petrovsky district one UAV shot down.
19: 00 shelling of heavy artillery of the Armed Forces of Ukraine of the Petrovsky District, Kuibyshev District and the Airport - Spartak - YaBP. Several batteries are firing at once, but they started to work at the same time minute by minute.
20: 00 on the southern front of the Armed Forces of Ukraine shelling from SAU "Gvozdika" of the village of Sakhanka.
20: 31 is the next stage of the shelling of Dokuchaevsk.
23: 00 Airport - Spartak - YaBP Fights and shelling are still going on.

Our intelligence continues to record the strengthening of the position of the APU near the front line. In the area of ​​Starognatovka village, (4 km from the front), the location of the four 152-mm ACS Acacia was discovered. The Ukrainian army also transferred six mortars of caliber 120-mm to the area of ​​Novogrigorovka village (3 km from the front), four infantry fighting vehicles arrived in occupied Dzerzhinsk (in Ukraine called Toretskom), and nine more armored vehicles near Avdeevka village.

As a result of the shelling of the Ukrainian artillery, one DPR soldier was killed and one was wounded.

10.11.16, Thursday.
It was quiet in the morning and in the afternoon, perhaps because of the bad weather - rain and strong wind.
15: 00 Airport - Spartak - YaBP, despite the rain, positional battles and exchanges of mortar strikes are taking place.
17: 00 Petrovsky district under shelling mortar 120-mm.
17: 00 Airport under artillery shelling of the Armed Forces of Ukraine.
17: 10 - 17: 20 our artillery worked on the APU batteries north of Donetsk.
20: 30 is the next artillery attack by Ukrainian artillery on the positions of the DPR in the area of ​​the YaBP. 20: 35 Petrovsky district under shelling. Our answer for the batteries of the APU.

11.11.16, Friday.
In the morning and in the afternoon there were no battles, only short skirmishes and exchanges of mines a couple of pieces per hour.
16: 50 immediately on all parts of the front began heavy shelling of mortars and artillery. Usually, we are accustomed to, shelling begins with small, then mortars, and then after an hour and a half shells. And here it all began immediately and in very large quantities.
19: 05 in Nitrogen mikrn after shelling there is no light, water.
20: 00 attacks on the western and northern suburbs of Donetsk, Airport, Spartak, YaBP do not stop.
20: 35 UAV is spinning over the western suburb of Gorlovka, the air defense system of the DPR works on it from a charger. North Zaitsevo positional battle using BMP and mortars.
21: 20 near the village of Sands, north-west of Donetsk, is in close combat, machine guns, machine guns, FOG and. APU supports the tank.
22: 30 on the line Airport - Spartak - YaBP fall 152-mm shells, a lot.
22: 40 Petrovka under artillery fire.
22: 42 on the northern front under fire Uglegorsk, Debaltseve.
22: 50 our artillery is working on the batteries of the Armed Forces of Ukraine, firing at the western suburbs of Donetsk.
23: Our artillery 20 opened fire on the APU batteries firing at the northern suburbs of Donetsk.
23: The 24 of the Armed Forces of Ukraine used the RSZO "Grad" in the village of Yelenovka and Aleksandrovka in the south and west of Donetsk.
23: 30 our batteries responded on batteries MLRS APU.
23: 50 our batteries sent a few "courtesies" on the positions of the APU in the north of Donetsk. Judging by the explosions and fires on the positions of the MLRS APU, our RS were more accurate.

In the area of ​​the Yelenovka checkpoint, an 16-year-old youth was killed when she tried to get into the republic as a result of the shelling of the Ukrainian Armed Forces. He was hit by a mine.

12.11.16, Saturday.
00: 00 battles and heavy shelling continue across the front, from the Sea of ​​Azov in the south to Horlivka in the north. Our answer a lot in all directions for several hours.
03: 00 battles and shelling continue, but with less intensity.
03: 40 APU again began heavy artillery shelling of the northern suburbs of Donetsk.
03: 40 in the west of Donetsk again shelling from the Ukrainian MLRS.
04: 20 from the side of Svetlodarsk shells are flying on our positions in the area Logvinovo, Uglegorsk and Debaltseve.
05: 00 shelling continues all along the front line, but less.

In the afternoon, the long-awaited silence finally arrived. There have been no such lengthy and powerful attacks since the liberation of the Airport in 2015.

16: 00 began evening shelling Airport - Spartak - YaBP - Yasinovataya - Gorlovka - Zaytsevo. APUs use AGS, LNG-9, mortars 82-mm and 120-mm, grenade launchers.
16: 50 began fighting on the southern front. The APU drove two infantry fighting vehicles and from two kilometers they are trying to work on our positions. Also working 120-mm mortars and to / to machine guns.
18: 15 APU on the southern front began to use the battery ACS "Acacia" 152-mm. Fights go from Sartana to Sakhanka. Civilians are watching and will not understand who is attacking anyone, as the shells fly from both sides.
19: 05 Petrovsky district is trying to storm the Ukrainian assault group. They are supported from AGS, mortars.
21: The 20 APUs process the outskirts of Dokuchaevsk on three sides with mines 82-mm and 120-mm.
21: 25 in the Petrovsky district after the shelling of a residential house.
21: 29 is flying over the Kalininsky district to the UAV UAV, previously it went to the Kiev district, where it was fired from our anti-aircraft guns.
21: 39 in the village of Yasnoe in the south of Donetsk from the landing, the Ukrainian LNG crew and tank are working, the street is full of fire. Also seen is moving the DRG in the gardens.
22: Fighting and shelling continue to the west and north of Donetsk. Our give otvetku of all weapons.

Photos used:
Ministry of Information of the DPR