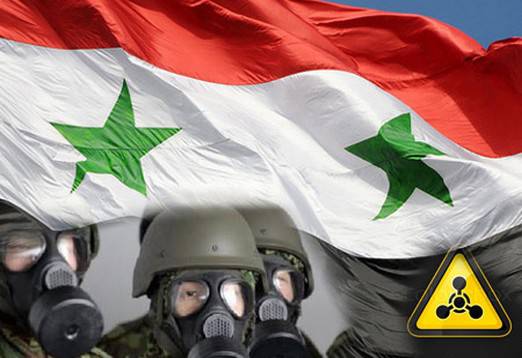 Is it possible to imagine such a villain of the militants of the “Syrian opposition”, as a result of which its patrons would finally refuse its support? Where is that same “red line” that even “freedom fighters” cannot enter?

Here for the legitimate Syrian government in 2013, the “red line” was designated - this is the use of chemical weapons. And after the large-scale 21 provocation of August of the same year, as we remember, the case almost ended in direct aggression against the SAR. Then, with the help of Russia, a compromise was found, as a result of which Damascus refused chemical weapons and agreed to its liquidation.

It is worth remembering about the difficulties encountered in the process of exporting these substances. Militants of the "opposition" repeatedly attacked specialists from the joint mission of the Organization for the Prohibition of Chemical Weapons (OPCW) and the UN, who arrived in the country to carry out the process of eliminating hazardous chemicals, attacked convoys that exported these substances.

The "opposition" and its owners were not at all beneficial to the consent of the Syrian leadership on the elimination of chemical weapons. They opposed the export of these substances in the exact time. Because the reason for such a desired and already planned attack disappeared. One can only imagine how the experts of the OPCW and the UN "dug their nose” to at least find fault with something. But they were still forced to state in 2014 that the process of abandoning chemical weapons and their elimination of Syria was completed on time. Thus, the Syrian government no longer has anything “seditious”.

Now, the OPCW Executive Council, under pressure from certain countries, adopts an underlined anti-Syrian resolution. It happened on November 11 at the session in The Hague. This place is too symbolic - it is in The Hague that it has been repeatedly in the newest stories unjust trials took place and biased sentences were issued. Yes, of course, it was done by another body, but strange coincidences are a feeling that the OPCW is now controlled by the same forces as the Hague Court ...

This decision did not come as a surprise, since it was preceded by numerous false accusations against the Syrian leadership. These accusations made by Western politicians and the media sounded shortly after the OPCW and the UN reported on the removal of chemical weapons from Syria and their destruction. It’s too profitable to impose such slander on the legitimate authority of the SAR - and public opinion can be adjusted accordingly, and again talking about the “inhuman regime”, keeping the country under constant threat.

But the OPCW, becoming a toy in the hands of those who continue to cherish the dreams of direct aggression, actually crosses out the work of their own experts. Which, by the way, worked under the fire of terrorists, removing these most toxic substances from Syria.

The Syrian Foreign Ministry issued a statement categorically denied the allegations made by the OPCW. “The Syrian government, starting with the 2014 of the year and to this day, has been fully assisting in the provision of all that is necessary for the international commissions to conduct a credible investigation. Substantial evidence and witness testimony were provided that some terrorist groups fabricated cases of alleged use of chemical weapons. ”, the document says.

The Russian Foreign Ministry also condemned the deceptive performance at the OPCW: “During a session of the Executive Council of the OPCW 11 in November in The Hague as a result of a multi-way combination with active use of the“ regional solidarity factor ”, a group of Member States managed to push through an anti-Syrian decision based on unconvincing, in fact, accusing Damascus conclusions of the Joint OPCW-UN mechanism investigating the use of chemical weapons in this country ... We call on all states that are on the road to generally accepted international principles and norms to put a barrier to this unprincipled and Responsibility.

It is worth paying special attention to the following fact: shortly before the session of the Executive Council of the OPCW, which turned into a sanctions decision against Syria, there was a fact of the use of projectiles with a toxic substance from the "opposition" in Aleppo. It happened on October 30 against the Dahiyat Al-Asad and Al-Hamdania areas. Two Syrian soldiers killed at least 37 civilians were hospitalized. Witnesses are talking about the "unknown white gas" that people breathed.

Russian experts have taken soil samples in these areas. The official representative of the Ministry of Defense of Russia, Igor Konashenkov, stated that these samples would be thoroughly investigated in the laboratory of the Scientific Center of the Radiation, Chemical and Biological Defense Forces. This institution is accredited by the OPCW itself. Express analyzes have shown: ammunition filled with chlorine and white phosphorus was used.

The fact that the militants of the "opposition" have factories in which shells are made with chemical warheads, the Syrian government has repeatedly stated. Special letters were sent to the UN about this, none of which the most authoritative organization in the world found it necessary to answer. The Syrian leadership also spoke with alarm about the seizure of chemical plants by terrorists - no reaction. But anti-Syrian fake "reports" were produced by bundles.

But after all as a result of this policy, toxic substances are not only in the hands of “white and fluffy” “moderate” opposition members, but also in the hands of the notorious ISIS (organizations banned in the Russian Federation). And now US officials fear that in Iraqi Mosul chemical weapons will be used against American soldiers. So, the director of the American National Intelligence, James Clapper, at a security conference in Munich, said: “ISIS wants to use chemical weapons against us».

But still, as we see, the anti-Syrian bias persists in the international arena.

Meanwhile, the Syrian Agency SANA reports that on November 14, terrorists again used shells stuffed with chlorine. These shells fired at the area of ​​An-Neirab in Aleppo. As a result, dozens of victims ...