November 15, 2016
4
To work effectively at a great distance from the bases, units of the armed forces and other structures need special equipment to ensure the operation of various systems. In particular, the widespread use of electronic equipment for some time imposes requirements in the form of the need to use charging systems that can work in the field. Not so long ago began the delivery of regular products of this class.


On the launch of the production of mobile systems to ensure the performance of the electronics of 7 fighters in November was reported by the Izvestia edition. According to him, relatively recently, the Federal Service of National Guard troops began to buy portable power plants, which are planned to be transferred for use by various special forces. Such equipment will allow the fighters to maintain combat capability and use the full range of necessary equipment during long-term work in difficult conditions at a distance from permanent locations. Recently, the troops receive all new radio-electronic means that need to be supplied with electricity. It is for the maintenance of such material parts and mobile power plants are intended. 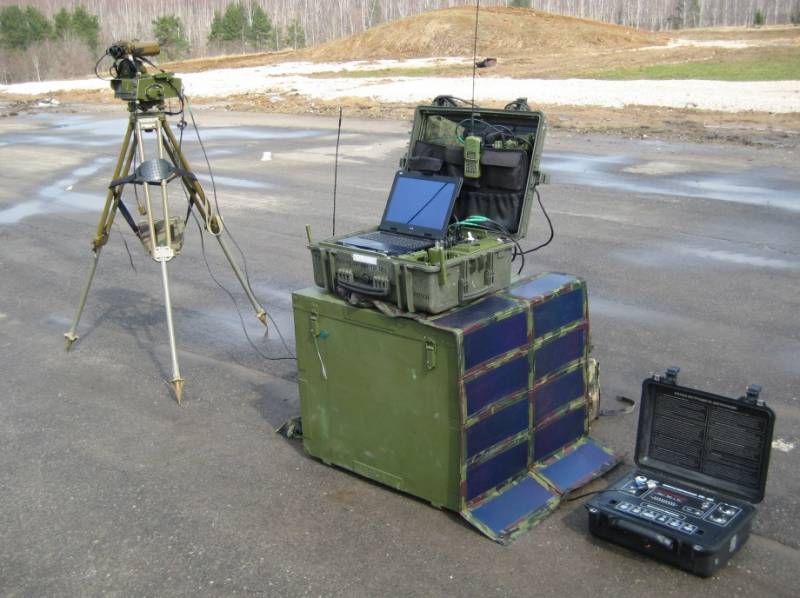 Mobile power plants of a new type are produced by the research and production group Solaris. The deputy general director of this organization, Yuri Danilovsky, told Izvestia some details of current work and industry cooperation with Rosgvardia. Thus, to date, the power plant of the type of EPS-120P has already passed all the necessary tests, confirming compliance with the requirements. Also already started mass production of such products. The first production complexes were transferred to the customer at the end of August.

It is reported that the development of the project EPS-120P was taken into account operating experience of previous power plants of the family. In addition, one of the main goals of the new project was to increase the share of modern components. As a result, it was possible to get a noticeable gain in weight parameters, as well as in the battery capacity, resource, etc. The result of recent work was the emergence of a mobile power plant, which differs from previous developments in its class with enhanced technical and operational characteristics.

It should be noted that the EPS-120P system is not the first mobile source of energy that entered service in power structures. Such devices, according to various data, have been used by various departments since the middle of the last decade, but until recently the amount of open information about such equipment left much to be desired. Now, however, a new technology is reported in the press, as well as revealing some technical details of the project.

The main task of the mobile power plant developed by the Solaris NPG is to ensure the operability of electronic devices used by various departments. Not being able to return to the base, a special unit operating, for example, in the rear of the enemy, must remain combat-worthy, including through the work of radio-electronic systems. The latter need timely recharging of batteries, which in a normal situation carried out from electrical networks. In the absence of the latter, it is proposed to use mobile power plants.

The development of NPG "Solaris" line EPS are lightweight portable power plants, the main elements of which are solar panels. The use of such an energy source allows you to work without reference to the "traditional" means of delivery of electricity, as well as within a reasonable time to get the required amount of electricity. Solar panels can be deployed in almost any situation, primarily in the field, after which they are able to fully solve the tasks, supplying the complex and consumers with electricity. 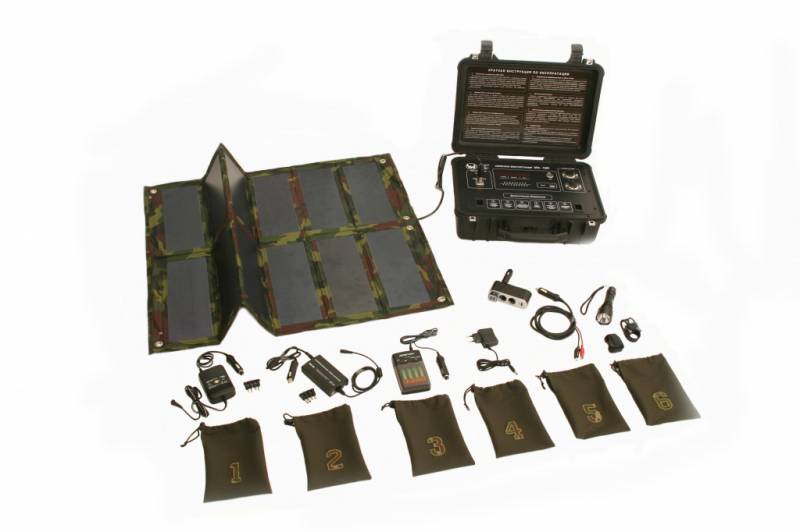 Characteristic features of the intended method of application led to the formation of the appropriate appearance of the power plant. It runs as several primary devices, interconnected in the required configuration. By changing the set of means connected to the main devices, charging of electronics of various classes and types can be provided. At the same time, the proposed architecture of the power station provides the relative convenience of its transportation.

The main elements of the EPS-120P complex are a power unit and a panel with solar panels. The power plant is a secure case that holds all the necessary devices. It houses the battery, control devices and means of transmitting energy to consumers. Also on the case provides a connector for connection to the solar panel. Dimensions and weight allow carrying case by one person. The preparation of this equipment to work takes minimal time.

According to Yu. Danilovsky, when creating a new power plant, the experience of developing and operating previous systems of this class was taken into account. Previously, lead-acid batteries were used to store electricity as part of mobile power plants. With all its advantages, such devices had a number of shortcomings that negatively influenced the overall performance of the complex. The EPS-120P station is completed with a lithium-ion battery. Such a battery is lighter and more compact, and also has an increased capacity and has fewer operational limitations.

The EPS-120P uses a lithium-ion battery with a stored charge 21000 mA • h. This capacity allows you to fully charge several batteries of various devices. For example, in the case of modern smartphones, the power station battery is enough for 6-8 devices. Depending on the specific parameters of the consumer device, the amount of the charged equipment can vary within fairly wide limits.

The energy source in the complexes of the new family are solar panels. The basis of the panel is a textile canvas, to which photoelectric converters and associated wiring are attached. The use of 12 photocells arranged in two rows of six pieces, allows you to fold the panel for more convenient transportation. When deployed, the solar battery can be placed on any support that improves the "reception" of light. For mounting on a support in the corners of the main blade there are grommets. A cable from the battery pack is used to connect to the main case of the power plant. Cable length allows you to place the battery panel and case at a short distance from each other. At the same time, the separation of elements of the complex over a large distance is obviously impossible.

The solar cells used are of rather high performance. It is claimed that in sunny weather conditions, it takes no more than 4-5 hours to fully charge an existing battery. In cloudy weather, the full charge period can grow to 7-8 hours. After completing a full battery charge, the fighters can recharge the batteries of their devices. Solar cells are able to work at air temperatures from -50 ° to + 70 °, and are also resistant to certain mechanical effects.

The power plant of the EPS-120P complex has two connectors for delivering energy to consumers. Chargers, cables and adapters of various types can be connected to them. For use with the power plant, several similar devices are offered that allow charging devices of various classes and types. Charging is performed using the cables and adapters supplied with the station. Due to this, the station operator gets the opportunity to recharge the devices by directly connecting cables to them or by removing the existing batteries for which there are appropriate chargers. Depending on the type of consumers and the equipment used, the EPS-120P station can simultaneously charge up to 10 devices.

For transportation, the EPS-120P complex is divided into several main units. This is a power station in a protected case, a solar array, as well as a set of adapters and cables. The latter are transported in several separate covers. The total mass of the complex is only 16 kg, so that its transportation should not be associated with special problems.

The EPS-120P mobile solar power plant is one of the latest developments of the Solaris NPG. Another newest product of this organization is the EMC-200P system for a similar purpose. When using similar ideas and solutions, it differs in some parameters and possibilities, first of all, in increased dimensions and power. In addition, in the list of products there are several other similar products of older models. In the old projects, other technologies were used, which is why such developments lag behind the newer ones by the main parameters.

It should be noted that NPG "Solaris" is a recognized leader in its field. The development of this organization has been exploited for a long time by security forces for various purposes. Thus, back in 2003, the FSB Border Service accepted EPS-100-2P and EMC-100P power stations, as well as chargers of types СЗУ2-BSA-15П and СЗУ2-BSA-30ПМ. As of autumn 2015, the FSB and its various structures received about one and a half thousand similar products. In 2005, deliveries of such equipment to the Internal Troops of the Ministry of Internal Affairs began. This customer received fewer 600 power stations and chargers. 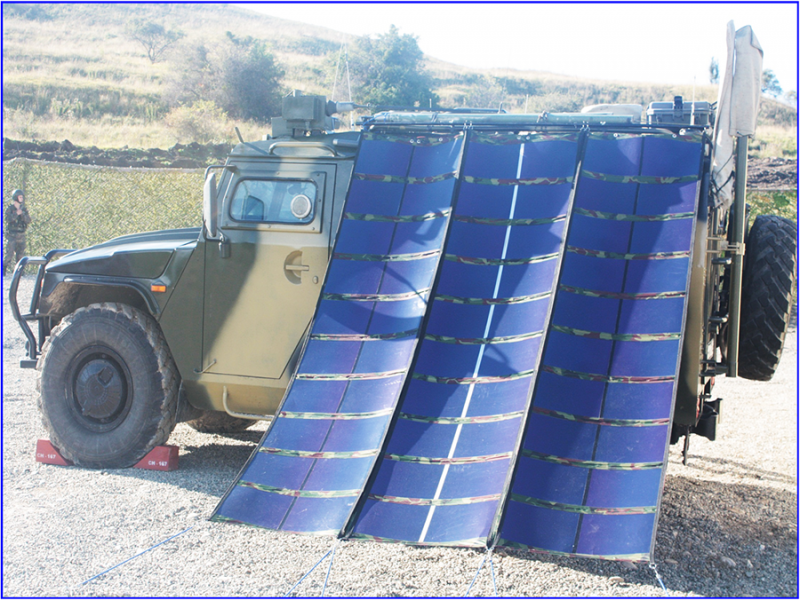 In recent years, the development organization has upgraded its equipment. Updated power plants and chargers were taken over in the 2013-14 years. In the same period, in accordance with the order of the coast guard of the frontier troops, the FES-Post power station was created with a capacity of 7,5 kW. Several such systems have already been transferred to the customer. An existing order involves the supply of 10 power plants that are planned to be installed on landing stages.

Of great interest is the project "FES-Tigr." Its goal is to create a solar power station suitable for installation on the P-145BMA command and staff vehicle on the Tiger chassis. The use of solar batteries allows such a crank to work and to perform tasks in various conditions, reducing fuel consumption for the power supply of electronic equipment. Last year, it was reported about the successful passage of military trials and the start of the state. The launching customer of the "Tigers" in command and staff performance with solar batteries was to be the Internal Troops.

According to the latest data, at the end of August, the list of mass-produced power plants of the Solaris research and production group, brought to customers, was supplemented with new products. The Federal Service of the National Guard troops ordered a number of EPS-120P type power stations. The first serial products for this order were delivered in late August. The recipient of the equipment was not specified, but in reports of the national press some special units are mentioned.

Mobile solar power stations for special forces are not a revolutionary new invention on a global scale, since such equipment has been in service with various armies for a long time. Nevertheless, the latest domestic developments are still an important element of the material part of the troops and security forces, allowing them to carry out full-fledged work in difficult conditions, having the ability to timely charge the batteries of regular radio electronic systems, the number of which is constantly growing.