Recep Erdogan found a place for Friday prayer in Minsk

November 15, 2016
9
Last Friday, Turkish President Recep Tayyip Erdogan opened the Cathedral Mosque in Minsk. This temple became the long-term construction of the Belarusian capital. It was erected already from 1997 of the year. Laid the mosque on the donations of the Belarusian Muslims. Later, construction money went from Saudi Arabia and Oman. However, the funds were not enough. The construction proceeded with long breaks and was completed thanks to the financial assistance of the Foundation for Religious Affairs of the Turkish Republic. 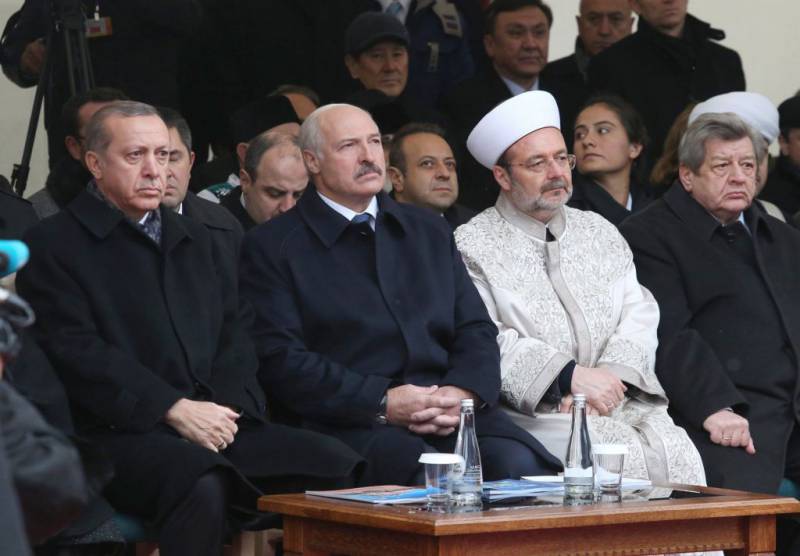 Islamic Mission of the Turkish President

Western experts amicably appreciated Recep Erdogan’s attention to Minsk as gratitude for the fact that at the time of exacerbation of Russian-Turkish relations, Alexander Lukashenko did not support the Kremlin and did not impose sanctions against Turkey. Moreover, Belarus has become a transit country for Turkish sanctions products. Such a policy of the official Minsk to some extent helped the Turkish business in difficult times for it.

Of course, this is a rather superficial assessment. As is customary in the West now, it reflects more political expectations than reality. In fact, over the past two years, trade and economic relations between Ankara and Minsk have simply collapsed. In 2010-2015, Turkey was the most important foreign trade partner of Belarus in the East. The annual volume of Belarusian exports to Turkey reached 170 million USD. Turkey imported products from 490 million dollars.

Turkish business invested heavily in the Belarusian economy. At the beginning of 2014, Turkey’s direct investment in Belarus exceeded half a billion dollars. Then there was a sharp withdrawal of Turkish capital from the economy of Belarus. This year, Turkish investment amounted to miserable 15 million dollars. The commodity turnover between the countries also fell.
So it’s not about political gratitude. Although at the meeting in Minsk, Recep Erdogan and Alexander Lukashenko did not stint on mutual praise and vivid epithets. Erdogan even called the Belarusian president "dear friend", and the new Sobor Mosque of Minsk - "a symbol of friendship between the peoples of the two countries."

From this assessment, Belarus Security Blog’s project manager Andrei Porotnikov came to a natural conclusion: Erdogan’s visit to Minsk was most likely an “image journey“ for internal use ”, demonstrating a certain success of Turkish foreign policy.”

It should be noted that the Cathedral Mosque in the Belarusian capital is far from being the first of the funds built by the funds of the Turkish Religious Affairs Office. For example, last September, Vladimir Putin and Recep Erdogan inaugurated in Moscow the Cathedral Mosque, reconstructed, including with Turkish money.

Islamic temples have already been built by the Turks in the states of Central Asia (there are four of them in Kazakhstan), Africa, and Europe. At the end of October, while visiting Estonia, Turkish Foreign Minister Mevlut Cavusoglu announced his country's readiness to build a mosque in Tallinn.

There is nothing surprising in the fact that it was the head of the foreign ministry who raised the Islamic theme during an international visit. The construction of mosques abroad under Erdogan has become an instrument of Turkey’s soft policy to expand its own influence. Ankara positions itself to the world as an example of a successful Muslim national state.

However, most of the projects are implemented not for budget money, but for the funds of various Islamic funds. These funds, in particular, help foreign citizens to receive religious education in Turkey, in order to work in new Turkish mosques built abroad. In recent years, Ankara has trained over three thousand such specialists in the field of Islamic theology. They became popular in the countries where Turkish mosques were opened.

In this regard, it is quite natural that Recep Erdogan tries to attend all the celebrations on the occasion of the opening of mosques built with the money of Ankara. In the new Cathedral Mosque of Minsk, Erdogan even performed his Friday namaz.

Who are the Muslims of Belarus

The Muslim community of Belarus in recent years has changed significantly. It has become multi-ethnic at the expense of students from Arab countries, migrants, and migrant workers studying in Minsk. In Belarus, there were representatives of various currents of Islam. As a result, two muftiates were formed. One is headed by Abu-Bekir Shabanovich (previously Boris Ivanovich Shabanovich worked as a school principal), the second - Ali Voronovich.

“Muslims in the territory of Belarus have been living since the times of the Grand Duchy of Lithuania, in which Tatars from the Golden Horde settled in the XIV century,” said Rais Suleimanov, an expert of the Institute of National Strategy, from Islam. - Gradually, they were formed into an ethnic and confessional group, called the Polish-Lithuanian Tatars. In terms of language, they assimilated, being among the local Slavic population, but retained their ethnic identity and Muslim religion. They can rightfully be considered the indigenous Muslim population of Poland, Lithuania and Belarus. ”

In Soviet times, Belarusian Muslims focused on the Spiritual Administration of Muslims in the European part of the USSR and Siberia. Its center was in Ufa. In recent years, the Russian muftiat has split. In the Bashkir capital is now the Supreme Mufti of Russia Talgat Tajutdin. Ravil Gainutdin, Chairman of the Council of Muftis of Russia, rose to the first functional roles in Moscow.

Mufti Gainutdin became quite a status figure and now represents Russian Muslims at all official events. One of the main persons along with Recep Erdogan was Ravil Gainutdin at the opening of the new Cathedral Mosque in Moscow.

At the Minsk celebration from the local Muslim Ummah, the word was kept by Mufti Abu-Bekir Shabanovich. He was also the main manager of the event. According to his will, there were no representatives of the Ufa muftiat among the Russian guests. From Moscow, invited the chairman of the Council of Muftis. It can be considered that the rapprochement between the two religious leaders of Russia and Belarus took place, among other things, on the basis of cooperation with the Administration for Religious Affairs of the Turkish Republic. A reflection of this cooperation was the visit to Minsk of Recep Erdogan.

His Friday prayer in the capital of Belarus should not be misleading. That was, first of all, an act of state action, frank geopolitics, and only then - the prayer of a zealous Muslim. Whoever objects, let him remember the recent events, when Russian-Turkish relations were blew up by a mean attack on the Su-24 bomber, the death of a pilot. This situation has greatly strained our Muslim elites, who have firmly turned to Turkey. Their grumbling was well heard.

Later manifested themselves and the main stakeholders. In numerous interviews, they vied with each other afterwards: with whom they contacted, which documents they prepared, which meetings they organized to restore relations between the leaders of Russia and Turkey. In the new context, they appeared peacemakers. In the shadow of the event remained that they were not ready to support the official policy towards a foreign state and were looking for a way to restore the status quo.

This example shows that the “soft policy of Turkey to expand its own influence” has not so much in common with the stated humanitarian goals, and spreading Islam around the world in its Turkish interpretation is quite a secondary task of Recep Tayyip Erdogan’s long-term foreign policy. And each new foreign mosque does not add priority to it ...