They lie and steal 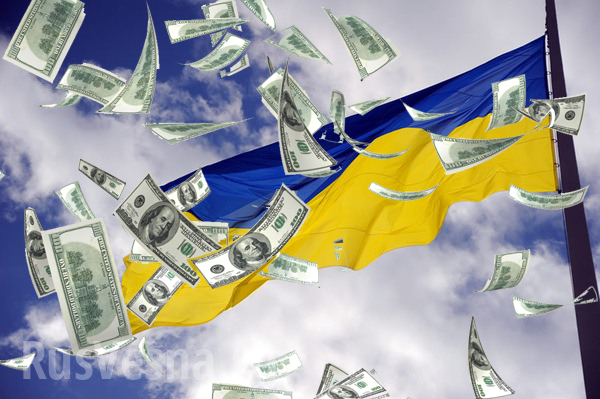 Ukraine risks remaining without the next tranche from the International Monetary Fund. An obstacle to obtaining another loan is the unfulfilled conditions set by the IMF for Ukraine, namely the adoption of a balanced budget, the transformation of the pension system and the implementation of land reform.

Not so long ago, on October 25 of 2016 of the year, Ukrainian President Petro Poroshenko confidently stated: “Ukraine cannot and will not live only in tranches of the IMF, World Bank, EU financial assistance. This assistance is a “financial cushion” for reform. ”

However, in less than a month, it turns out that there are no reforms or a pillow. And on November 9, the chairman of the National Bank of Ukraine (NBU) Valeria Gontareva reports that “Ukrainians shouldn’t have any illusions about independence from international aid.” It turns out that the Ukrainian economy is very weak and is strongly influenced by financial injections from Western partners. For some reason, Gontareva called the European lenders "donors", perhaps this is a subtle hint at how the Ukrainian people will pay off their debts, which today account for more than 35 billions of US dollars.

By the way, even the former governor of the Odessa region, the Georgian Ukrainian Mikhail Saakashvili, noted the critical dependence of the state on external financing. And he expressed the opinion that the Ukrainians should abandon Western assistance in order to start developing independently, noting that the tranches are crutches that prevent the country from getting on its feet. But if the tranches are crutches, then they will not help, the corrupt gangrene has already hit Ukraine’s legs so much that only amputation can save the life of the country. And in this case, instead of crutches, a wheel chair is required.

At such a pace, the Ukrainian state cannot and will not live on its own. Ukraine is bankrupt, economic and political, a walking corpse in which people support life only to maintain the aggressive image of the Russian Federation on the world stage. Europe does not need a prosperous Ukraine. Her political leadership understands this perfectly well, as the recently published openly signals electronic declarations. For example, the contribution to ensuring the “stability of the national currency” by the head of the NBU is that 1,8 million dollars are in her account. By the way, it would take almost 40 years of daily trips to the exchange office for the legal acquisition of such a foreign currency, because, according to an official decision of the NBU, the currency can be purchased for an amount not exceeding $ 200 per day. By simple mathematical calculations, it turns out that Valeria Gontareva earned at least $ 12 (average monthly salary of a Ukrainian) every day since 200 years.

The publication of these declarations was also the last straw for Mr. Saakashvili, who, apparently, was offended by his new colleagues for not sharing with him and resigneddeciding first (as the well-known representative of the family of rodents) to leave the sinking ship of the Ukrainian Independence Square.

At the same time, these declarations have one unconditional plus for the people: in the case of another color revolution or Maidan, the Ukrainian “revolutionaries” will know exactly how much cash, elite watches and other valuable items are kept at each official’s home. And if they manage to collect all these honestly earned wealth, they can not only pay off all the debt obligations of their country, but also offer financial assistance to countries in need in the European Union.

In conclusion, I would like to remind you that 25 years ago, Ukraine seceded from the USSR, being a prosperous, industrially developed republic, but today it squandered the entire Soviet legacy and turned into a beggar, embittered, beggar, ready, like an addict, for everything for another dose. There are only two reasons for this degradation. As they say in the people, they lie and steal.