Where to expect the deployment of anti-ship versions of ATACMS? Details of advanced state RK projects 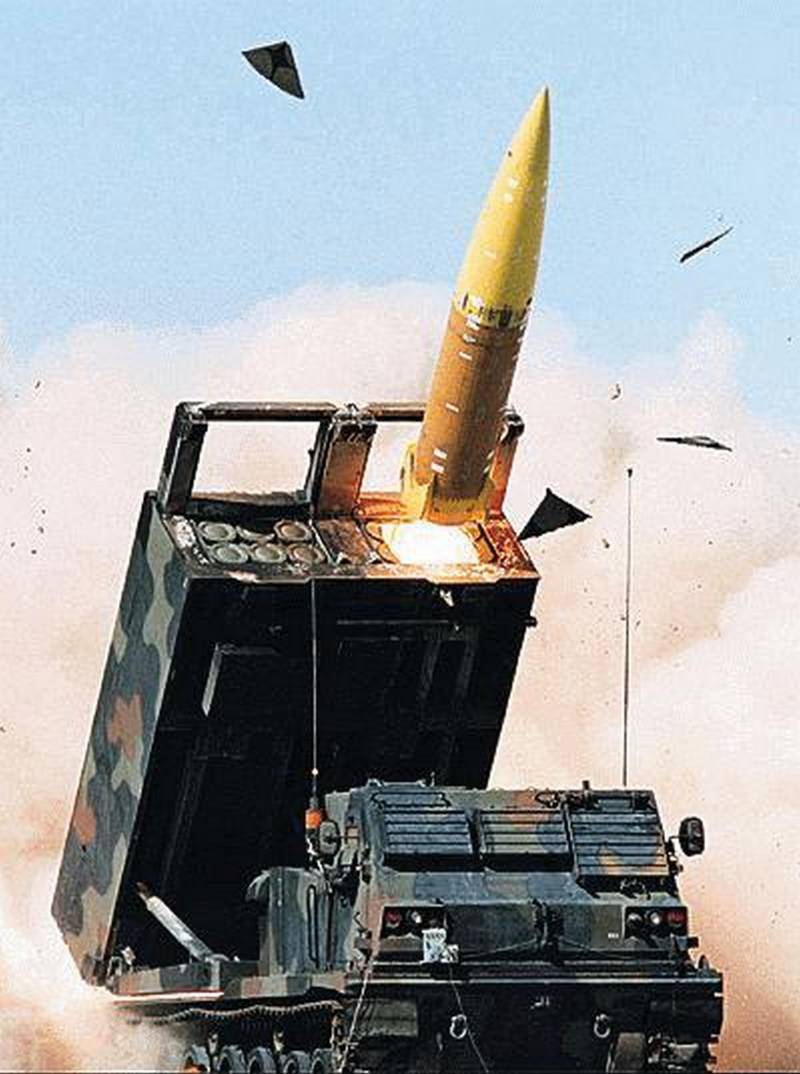 Modern means of naval air defense and missile defense in fleets leading countries of the world every year increase their combat potential both in high-altitude and long-range, and in production parameters; the flight characteristics of interceptor missiles are also becoming more and more perfect, just like the guidance systems, most of which today are represented by active radar seeker, which significantly increase the target channel of shipborne anti-aircraft missile systems. The most advanced air defense missile systems today can be considered such as "Polyment-Redut" (there are problems with the implementation of interception of targets at ranges over 50 km), updated "Standard-2/3" The radar is in the design stage), as well as the German "Standards-2" controlled by the multi-channel APAR radar, the French PAAMS and the Sea Sparrow air defense missile system of the Japanese Akizuki-class destroyers with the unique 2-band multifunctional radar from the Thales company - FCS- 3A. China has not lagged behind world indicators with its HQQ-9 installed on surface ships of the main classes - destroyers of the Lanzhou and Kunming types.

Directly proportional shipboard SAMs improve their combat qualities and anti-ship missile systems, the best modifications of which have recently been developed and entered service with the Russian Navy, as well as the naval forces of India and China. Modern anti-ship complexes are the most serious weapons containment on the sea and oceanic theater, because, as a rule, the massive use of modern anti-ship missiles at the moment of confrontation between two or more CBGs leads to a partial breakthrough of even the most advanced shipborne air defense missile systems, as a result of which both sides may receive significant damage incompatible with the subsequent actions of the ship group.

If in the fleets of the Russian Federation, India and China there are high-speed supersonic anti-ship missiles of the Onyx, X-41 Mosquito, BrahMos and YJ-18 types, which leave enemy air defense missile defenses a minimum of time to repel the strike, then all of them are in service The US Navy's anti-ship missiles are subsonic, and therefore their interception is a much simpler task for our KZRK. At the same time, even a small radar signature of the American LRASM and “Harpoon” missiles cannot fundamentally change the situation due to the equipping of the surface ships of the air defense missile system with high-energy radar for illumination and guidance based on the PPAR and AFAR, which can easily detect and capture the American anti-ship missiles with an effective dispersion surface 0,01 — 0,1 m2, and this is without taking into account the optical-electronic sighting systems, which are able to correct the operation of the air defense missile system if the US Navy at the moment of impact uses itself loty electronic warfare type F / A-18G «Growler».

In such a situation, the Americans, by introducing various technological innovations into existing weapon systems, are trying to eliminate the backlog of Eurasian maritime superpowers. Leading US aerospace corporations are working on many projects of future anti-ship missiles, but the most famous of them, presented in detail in the network and print media, are supersonic anti-ship missiles based on the RIM-174 ERAM (SM-6) long-range anti-aircraft missile (the project is Raytheon Corporation and HAWC Hypersonic (Hypersonic Air-Breathing Weopon Concept) (developed by the Agency of Advanced Defense Research Projects DARPA).

174 February 8 was revealed from the words of US Secretary of Defense Ashton Carter about the design of the anti-ship version of the RIM-2016 ERAM. Spending a total of 2,9 billion dollars, the Pentagon plans to equip the US Navy 3,5-flywheel anti-ship missiles with a range of up to 370 km. Naturally, to achieve such a range, the flight of the rocket will be carried out along a semi-ballistic trajectory, most of which will take place in the stratosphere, where the slowdown of any body is minimal. The missiles will have a significant drawback - approaching the enemy warship at an angle of 20 — 45 degrees, which will make it easy to intercept the anti-ship Standard-6 with the enemy's modern anti-missile defense systems, since its speed at the final stage is unlikely to exceed 2200 — 2500 km / h Interception can be carried out with C-300F / FM "Fort / -M", "Calm-1", "Dagger" and "Pantsir-M" complexes.

But the anti-ship RIM-174 ERAM has a serious advantage. All Standard-2/3 missiles are unified with the universal missile launchers Mk 41, and therefore, in contrast to the 8 RGM-84L anti-ship missiles (deployed in 2 inclined quadruple Mk 141 launchers on American NKs), any American UR class EM Arley Burke ”or Ricc“ Ticonderoga ”can carry on board any number of supersonic anti-ship missiles, limited only by the number of launch cells of UVPU Mk 41 (90 operating ones for“ Arleigh Burke ”and 122 for“ Ticonderoga ”). The ratio of the RIM-174 ERAM missile launcher ammunition, the RIM-161A / B interceptor missiles, and the promising RIM-174 based anti-ship missiles may be in favor of the latter (40 - 50 anti-ship missiles), and therefore even 1 AUG as part of 1 Ticonderoga missile system and 3 EM “Arleigh Burke” can arrange KUG of the enemy “star raid” of 200 anti-ship missiles, flying at speeds up to 2,5M. Completely intercepting such a swarm will be almost impossible. Armed with "Harpoons", the American AUG could send out a volley of no more than 30-40 missiles, not taking into account the tactical wing of the deck aviation.

The most advanced is the HAWC hypersonic long-range tactical missile project, which DARPA is working on. One of the points of the program provides for the implementation of the hypersonic speed of the product, which should be 5320 km / h with a further increase to 10630 km / h. These speed indicators are no longer unique in rocket technology, since it is known that the 5V55R and 48N6E missiles have a speed of 6,25 to 6,6M, but are unique for air-to-ground / ship cruise missiles. A swarm of 7-2066 HAWC missiles approaching at a speed of 30M (40 m / s) will pose a serious threat to even the most modern ship and ground air defense systems. This will become possible for one more reason - the low RCS of HAWC. The fuselage, made of composite materials with radio-absorbing coatings, will reduce the missile's radar signature to hundredths of a square meter, which is why the Type-346 AFAR (installed on Chinese Type 052D EMs) will be able to detect HAWC at a distance of no more than 80 km. There will be no more than 1 minute to intercept. Imagine, in just 40-60 seconds it is necessary to intercept 30 subtle hypersonic anti-ship missiles, it is almost impossible to accomplish this with modern shipborne missile defense systems! Today this is the most dangerous project of a promising anti-ship missile system. From images published by Western informationnews resources, it is clear that HAWC can be a continuation of the project of a hypersonic tactical missile of the X-51A "Waverider" type - the basis of the American concept of "Rapid Global Strike" (BSU), and therefore it is expected that progress in the development and initial combat readiness of HAWC may take place already by 2025.

In the final part of the article, we will consider another American program for reincarnating the existing offensive rocket armament of ground-based theater of military operations into a long-range anti-ship complex.

According to the Military Parity information and analytical resource, citing Taiwanese media, on October 10, 28, the US Department of Defense announced the launch of a program to expand the combat and functional capabilities of the ATACMS operational tactical missile system. The main part of the update will be directly related to operational-tactical ballistic missiles (OTBR) of the type MGM-2016B (ATACMS Block IA) and MGM-140B (ATACMS Block IIA). It is these modifications that have the maximum range of 164 km in the ATACMS family and, in addition to the inertial guidance system, are equipped with a GPS satellite correction module and a system of ring laser gyroscopes, which made it possible to achieve a circular probable deviation (CWE) within 300-15 meters

Based on the official data, the US Armed Forces have abandoned the use of inhumane cluster warheads such as M-74 APAM (Anti-Personnel, Anti-Material), and therefore, together with Lockheed Martin, they concentrated all their efforts on upgrading the monoblock warhead with self-guided combat elements of the cumulative type P31 BAT, as well as further improving the accuracy of the aerodynamic control surfaces. The most interesting solution is the empowerment of the ATACMS, in a monoblock performance of the warhead, with the ability to surgically accurately hit small-sized moving sea and land targets. To do this, Lockheed Martin specialists must equip the rocket with an active radar homing head of the millimeter Ka-band, which will ensure an accuracy of the CEP for 3-7 meters, and also gas-dynamic transverse-control impulse engines may be required in case the target maneuvers. The danger posed by this project should not be underestimated. In fact, we are dealing with the Americans copying the Chinese concept of DF-21D anti-ship medium-range ballistic missiles, but on a smaller scale limited to 300 km, which indicates some tactical features of the use of the updated ATACMS.

Firstly, these complexes are created exclusively for use on small water-based theaters - inland seas with small straits and bays, where modernized anti-ship versions of MGM-140 / 164B missiles will be able to calmly attack enemy surface ships throughout the possible maneuver distance. Examples include the Baltic Sea and the Gulf of Finland, as well as the Mediterranean and Black Seas. Strengthening their ground component of troops in Western and Central Europe, the Americans can deploy a division of similar ATACMS anywhere in Denmark, the northern part of Germany, Poland or Estonia, which will cause another and very serious threat for the warships of the Baltic Fleet, considering that “Polyment-Redut”, capable of effectively destroying such means of air attack, is installed on a small number of surface ships (corvettes pr 20380). And the M142 (1 rocket ATACMS) or M270 (2 rocket, respectively) launchers can pull up to several dozen, so there will be something to work on with the calculations of our “Three Hundreds” and “Four Hundred Hundreds” in the Kaliningrad and Leningrad regions.

Secondly, the maximum flight speed of the OTBR family of ATACMS is 1500 m / s (about 5400 km / h), because of which the old versions of the complexes, for example, Buk-M1 and C-300PS, cannot intercept them on the march segment flight paths, and therefore the solution of the question can only be updating the Baltic Fleet shipboard with new frigate type Admiral Gorshkov, which have full-fledged missile defense, and parts of the East Kazakhstan region and military air defense systems are promising C-300ВХNUMX, С-4 and Buk-М400 ". The development and launch of serial production of the ATACMS anti-ship modification will take a minimum of time and financial investment in comparison with the same HAWC hypersonic, and therefore we can learn about the appearance of uninvited guests in the Baltic States or near the borders of the Southern Military District in the coming years.