November 18, 2016
19
By the end of 1939, when the Soviet-Finnish war began, the Finnish army was armed mainly with small arms. weapons own production. For example, the Finnish submachine gun Suomi, who looks very much like the famous Shpagin submachine gun, became one of the symbols of that war. Far less people know about Finnish pistols of that period. One of them was the semi-automatic (self-loading) pistol L-35 designed by Aymo Lahti. This gun was the personal weapon of officers of the Finnish army, and Aimo Lahti himself is rightly recognized by his contemporaries as the father of the Finnish small arms 1920-1930's.


Work on the eight-charge pistol under the German cartridge 9 × 19 mm Parabellum Aimo Lahti began in the 1929 year. The weapon was commissioned by the Finnish army in 1935. At the same time, the pace of its production was rather low. By the start of the Winter War in Finland, all L-500 35 pistols had been manufactured. It is worth noting that this is the only "polar gun" in the world. The weapon was specially created by Lahti for operation in conditions of low temperatures and possible icing.

Quite often, when you first look at the Finnish L-35 pistol, all lovers of firearms immediately associate with the more famous German Luger P.08. Indeed, these two pistols look very similar, but this is where their similarity practically ends. When creating his L-35 pistol, Aimo Lahti paid a lot of attention to ensuring the reliability of weapons in the harsh northern conditions: the mechanics of the pistol are reliably protected from water and dirt, which at low temperatures could lead to failures and inability to use the pistol. Also, to improve its reliability in the design of the L-35, a rollback recoil accelerator was used. The main advantages of this model, experts attributed easy descent and low recoil when fired. 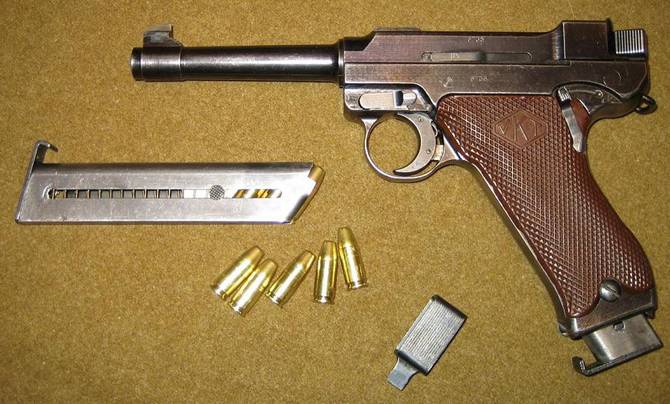 At home, the L-35 pistol was produced in relatively small batches, the total output was only about 9 thousand copies, production was completely stopped after the end of the Second World War. At the same time, this rather successful pistol turned out to be in demand in neighboring Sweden, where in 1940-1946, about 90 thousands of pistols called Lahti Husqvarna m / 40 were produced. Changes compared with the Finnish gun were minor. Thrifty Swedes exploited this weapon for a very long time, the gun remained in service until the 1980s.

It should be noted that by the end of the 1920s, the Finnish army was armed with pistols and revolvers of various calibers and systems. Here were the inherited from the Russian imperial army "Nagana" and the Belgian pistols "Bergman-Bayard", as well as German pistols "Parabellum". Realizing that the military needed a single pistol adapted for use in fairly harsh conditions, Lahti set about creating a pistol that would meet the requirements of the Finnish army: simplicity of design, high reliability, ease of assembly and disassembly, the ability to pierce a German helmet at 50 distance . Even then, the gun was compared with the Luger P.08 that was in service with the Finnish army. Externally, the pistols were similar due to the large inclination of the handle and the open barrel, but the design of the two pistols was different.

The main feature of the Finnish Lahti L-35 pistol was a fully exposed (open) barrel. This form of weapon originates from the model of Borchardt, which he introduced back in 1893 year. And although already in the 20th century, Browning pistols with a barrel, which was covered with a bolt (cover-casing), began to be widely used, the shape of a pistol with a protruding barrel continued to attract the attention of designers around the world. For example, in 1925, a pistol made by Kiyiro Nambu entered service with the Japanese army. Contributed to this very great popularity of the pistol of Georg Luger, whose features he inherited. 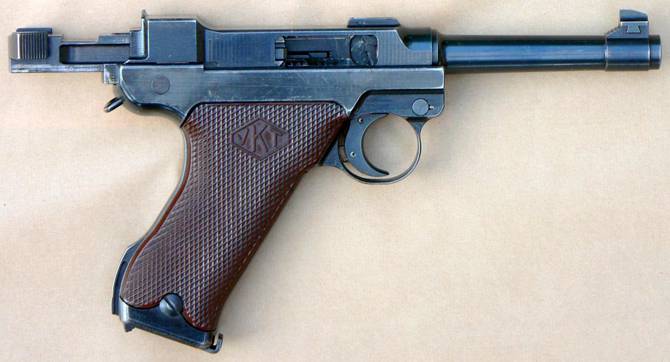 The L-35 pistol among the Finnish military was also known as Suomi-pistooli and Lahti-pistooli. In this case, the weapon did not turn out exactly the way it was represented by the military. The gun was quite heavy and large, but it turned out very comfortable when holding and firing from it, it was easy to control, and the accuracy of shooting was very high. Also, the weapon was distinguished by high reliability of operation, including at extremely low ambient temperatures. But despite all this, the L-35 pistol was also quite difficult to maintain. In order to disassemble, clean and assemble a pistol, its owner had to have the skills and certain skills, and only a highly qualified master could repair it in the event of a pistol breakage. However, it is fair to admit that the pistol broke very rarely, and it was made of very good high-quality weapon steel. Lahti L-35 was produced at a very slow pace, partly due to the manual fine-tuning and assembly of weapons.

Pistol Lahti L-35 was a sample of self-loading weapons, built on the basis of automation with a short stroke barrel. The barrel of the pistol was rigidly connected to the receiver of a rectangular cross section, the shutter was moving inside it (also a rectangular cross section). The locking of the bolt and receiver was carried out using a "P" -shaped latch, which was movable in a vertical plane. In the first moments of the shot, the barrel of the pistol, together with the receiver and bolt, rolled back a few millimeters, after which the latch, interacting with the frame, lifted upwards and released the bolt. The barrel stopped, transmitting kinetic energy to the gate through a special detail in the design of the L-35 - the gate waste accelerator. For manual reloading of the pistol in the back of the bolt were two grooved grippers for fingers that protruded behind the receiver. On the upper surface of the receiver L-35 in a special tide was a pointer to the presence of the cartridge in the chamber. The window for ejection of the sleeves was on the right side of the receiver, in the usual position it was closed from the inside by the body of the bolt. The ejector was spring loaded and was in the left wall of the receiver.

The trigger mechanism of the pistol - with a hidden trigger, which was located inside the frame, because of which the drummer does not run parallel to the axis of the barrel, but at an angle upwards to the shutter mirror. The Lahti L-35 pistol was equipped with a safety lever blocking the trigger mechanism; the safety device was located on the left side of the frame. The weapon turned out to be quite massive, and even the famous Mauser K-96 was superior in weight without ammunition. The handle cheeks on the L-35 pistols of the first series were made of beech wood, later they were replaced with plastic elements. 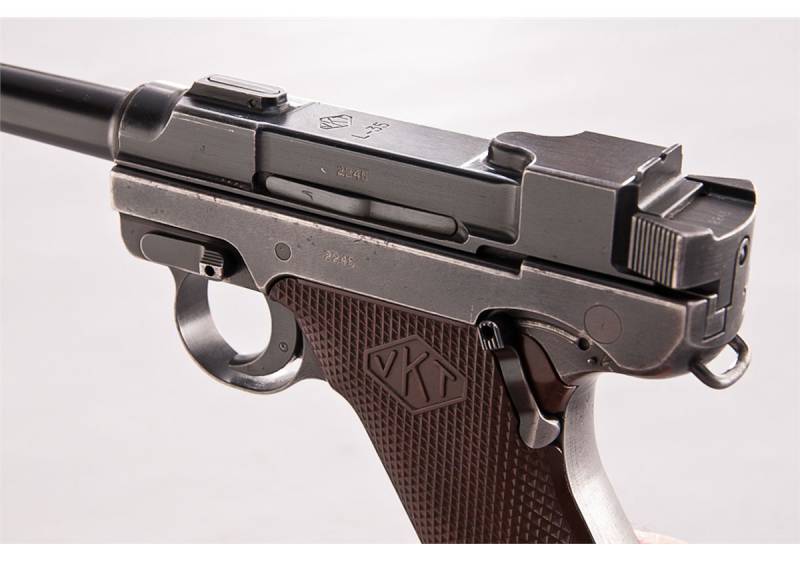 The L-35 pistol was produced in Finland in four major series. The Zero was made back in the 1938 year and was intended primarily for army tests. The first series, in which order 2600 pistols were produced, was produced from March 1940 to July 1941, and was distinguished by the presence of a figured protrusion on the upper rear part of the receiver. From August 1941 to March 1942, the second series of pistols was produced - about 1000 copies, these pistols lacked a figured protrusion on the receiver, and also the geometry of the locking wedge was modified. The third series, which consisted of more than 2000 copies, was produced from April to September 1944. In the pistols of this series there was no rollback accelerator, and the receiver received a slightly different form. The last batch of approximately 1000 pistols was already made in 1945 from stock of the remaining parts.

Swedish guns Lahti Husqvarna m / 40 differed from the Finnish in a number of parameters. First, purely visually, they had an increased trigger guard, a slightly longer barrel, as well as a groove on the handle designed for fastening the holster-butt. Secondly, the Swedish pistols did not have a pointer to the presence of a cartridge in the chamber. Thirdly, they did not use a gate accelerator (for reasons of cheapening the production of a pistol), which, in turn, somewhat reduced the reliability of its automation. 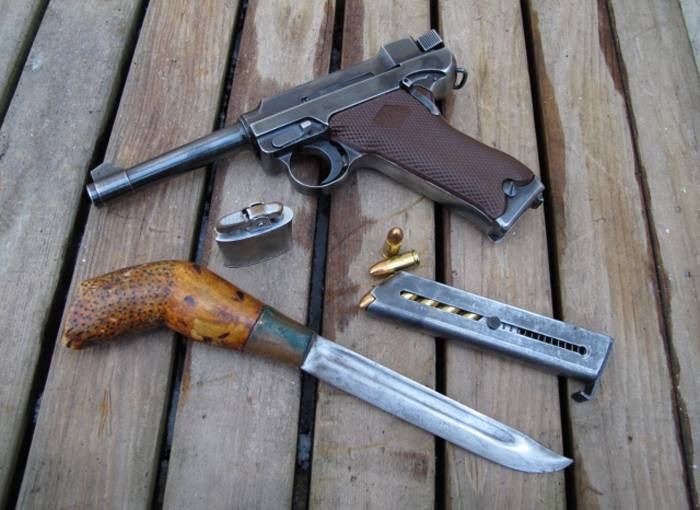