The Circassian Question. What did the Jordanian delegation discuss in Adygea?

November 14, 2016
11
At the end of last week, Syria received information that the Syrian government army had blocked a militant group of up to 1,5 thousand people in the capital Damascus province. The report contained information according to which the Syrian army on this sector of the front was able to close the border between ATS and Jordan for the first time in several years. Militants of various factions, including “Dzhebhat en-Nusru” (banned in the Russian Federation), actively used this section as a corridor, quietly retreating to the territory of the neighboring Syria state to lick their wounds and regroup, using the opportunity to dress as refugees. As soon as the forces of the Syrian government troops stepped up attacks on the militants, they could afford to infiltrate through the Jordanian border, using its too strange transparency. Now the corridor is closed, and the militants are in the boiler, to the elimination of which the government forces of the SAR and started the other day.


It would seem that the representatives of the Jordanian authorities should have long taken care of the border in the “sieve” format through which the militants were infiltrating, in order to cut off the supply lines of the factions and to make a feasible contribution to the fight against international terrorism (and the same on the international level). But as it turns out, the official Amman has other concerns. Moreover, these concerns are in fact directly connected with Russia. So what are we talking about? We will understand.

Less than a month ago, the news agency "Adygea Today" published material that did not go beyond the regional, although the topic raised in it, by definition, is beyond the scope of a single region of Russia. The talk was about the visit to Adygea of ​​a representative Jordanian delegation, which included both current and former representatives of the National Assembly - variations of the parliament. Two names are named among the leadership of the delegation - Hakuz Heyrdin (ex-senator of Jordan) and Munir Sobrok (deputy of the National Assembly of Jordan of the current convocation).

The visit to Maykop of Jordanian representatives was positioned as an event to strengthen the partnership based on the deepening of cultural and social ties. At the same time, the lion's share of all events in which Jordanian guests took part were the events of the so-called “Circassian Question”. 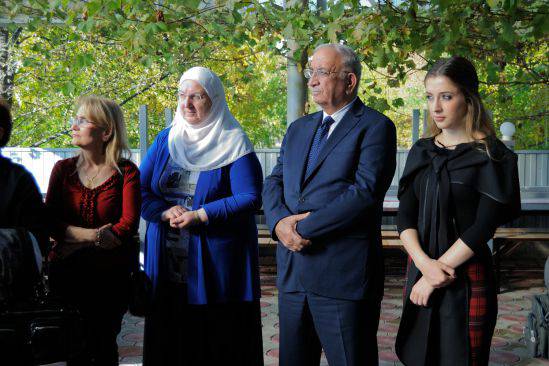 From the speech of Munir Sobroka:
In the current unstable political conditions, all Hase (“Duneypso Adyghe Khase” - representatives of the so-called International Circassian Association) in the world should contribute to the association. Today, in most foreign countries, Circassian associations are few, and therefore it is extremely difficult to really influence the solution of issues important for the Circassians (Circassians) of the whole world. This can be done only with close cooperation, which the ICA can provide.

During the meeting with local public organizations, representatives of the delegation from Jordan stated that Circassian associations operate in the USA and Australia, which are trying to raise the issue not about the cultural association of Circassian peoples of different countries, but about opposing Circassians to other nations. The above-mentioned Hakuz Heyrdin stated that these are political games that aim at shaking up a community of peoples, including the peoples of the Caucasus.

From the statement of Heyrdin on the activities of the American and Australian Circassian organizations:
Why do they do it? This is all politics. A policy that targets members of the diaspora against Russia. These figures promise Adygs support. They say: “Look how much we have done for you and are ready to do! And what has Russia done for you? ”And many believe them, not fully understanding the true intentions of the representatives of these countries. I can say that in the Syrian issue the inhabitants of Jordan were and remain on the side of Russia.

At the same time, representatives of other Circassian and "pseudo-Cherkessian" associations, with exactly the same argument, state that it is in Jordan that the movement that the Circassian people are ready to stir up conflicts in the North Caucasus (in Russia) is becoming more active. Approximately the same statements: “Circassians, unite under ours, and not under any other colors and ideals, but otherwise you can be used as a tool to incite strife.”

The main question in this situation: who, in fact, believe? And do we need to believe these organizations at all?

The information field of the visit of the Jordanian delegation to Adygea will be incomplete if it does not cover the episode in which the ex-parliamentarian from the delegation declares that Jordan, it turns out, stands on the side of Russia on the Syrian issue, and thanks the Circassians (Adyghe) from the Middle East can move to the North Caucasus, where to find a home and hide from the war.

Hakuz Heyrdin:
We are concerned about what is happening in Syria, primarily because our compatriots live there. And we are grateful to Adygea for the fact that the Adygs, for whom the republic - historical homeland, there is an opportunity to return here, to be saved from the war. Moreover, here they have the opportunity to study their native Adyghe language, to join the national culture. Today we saw that in the republic really much attention is paid to this. Adygs of the whole world know and appreciate this help.

And again, everything seems to be wonderful, beautiful, in partnership ... But the feeling of some kind of slippery, forgive the Jordanian guests, does not leave. If Jordan really supports Russia in the matter of resolving the Syrian conflict, is it worth singing laudatory odes to the fact that Adygea is capable of sheltering Circassian Middle Eastern refugees? For Russia as a whole and for Adygea in particular, it seems, it would be much more effective if Jordanian deputies provided the Russian Federation with support not in words but in deeds: for example, they would make maximum efforts for the Syrian-Jordanian border to be locked up. In the meantime, it turns out that this very castle, at the cost of considerable personal losses, is trying to hang on the Syrian-Jordanian gate only the SAR army. At the same time, the Jordanian side looks at the transboundary movements of militants, to put it mildly, through our fingers.

Jordan’s support for Russia would be real if the official Amman covered up the “shop” for NATO instructors to train representatives of the so-called “New Syrian Army” at Jordanian bases. These are the very armed formations, some of which, barely crossing the Syrian border, along with weapons swears allegiance to "en-Nusra" or ISIS (prohibited in the Russian Federation). Federal Agency News Last summer, published material that says that the representatives of the NSA were trained by British and American military instructors under the supervision of the CIA. These same "new Syrian army men" are very active in the network and the media, almost permanently publishing fakes about the alleged attacks of the Russian Aerospace Forces on civilians.

Why are the Jordanian deputies little concerned about these issues, but so pulling to raise the Circassian issue (even if perhaps from a humanitarian position) in Adygea ... It seems that Russia is able to deal with its national policy itself.