January 23 2012
23
There was a new information about the combat tests of a new generation of weapons - XM25 grenade launcher. The American soldiers, who had a chance to try the new XM25, say that besides the opportunity to destroy the enemy behind various shelters, the new product has an effective range twice as great as the AK-47, popular with the Afghan militants. And at the same time, the new grenade launcher differs from other grenade launchers, artillery and mortars in that it causes significantly less collateral damage. 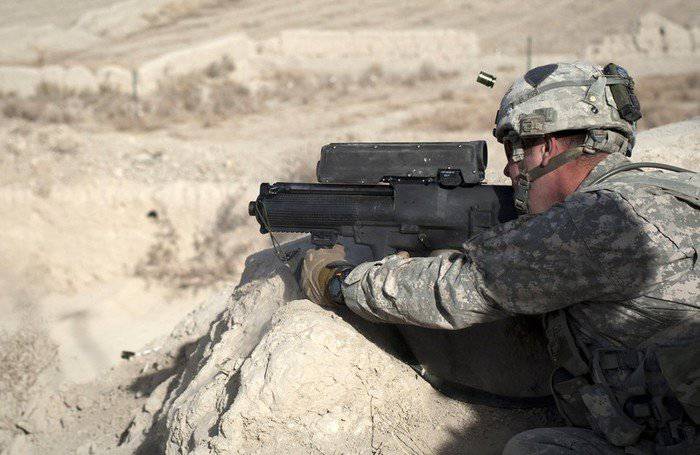 Over a year in Afghanistan, XM25 has been used more than two hundred times. According to Lieutenant Colonel Shawn Lucas, who is responsible for the combat tests of the new development, almost all of the fights ended quickly, and XM25 successfully demonstrated its unique properties. The program was recognized by the military leadership as successful, and so much so that 36 units of 36 XM25 were also ordered, although the initial plans suggested an experimental batch of 5 units.

Interest in the new grenade launcher has already shown several European countries. Germany is developing similar technologies, for example, but the Germans are planning to use 40-mm grenades, while the American version shoots 25-mm. A larger case allows for the integration of electronic components at lower cost. Already, ATK, which developed the HM25, plans to fill the shells of larger calibers with its “smart” fuses.

XM 25 is equipped with an electronic sight, combined with a programmer, which introduces the distance to the target in the grenade. Inside the grenade is a counter of revolutions of the projectile around its axis, which thus determines the moment of fuse activation. This system allows undermining in a window opening, above a trench or hatch tank, wherever it is required to hit a target protected from the fire of conventional small arms.

Naturally, such a clever filling made XM25 quite expensive, the price per piece is 35 thousand dollars, and even with mass production the grenades will cost 25 dollars per piece. When mass production price weapon it is unlikely to fall, two-thirds of the price is a “smart” thermal imaging sight. However, when compared with those used to defeat protected targets aviation ammunition and anti-tank missiles worth several tens of thousands of dollars, then fast firing with grenades at $ 25 will in any case be cheaper.
Military Reviewin Yandex News
Military Reviewin Yandex Zen
23 comments
Ad