November 17, 2016
16
The fighting in the Baltics in the spring-early summer of 1915 was highly dynamic, while the opponents concentrated a significant number of cavalry units in the theater of military operations. During this period of the war, on the northern flank of the Russian-German front, operational units of a mixed composition operated with a significant share of mobile troop groups.


By mid-May, the German grouping that operated in Latvia and northern Lithuania, after receiving additional forces, was structured in the form of the Nemansky army. Russian reserves were hurriedly sent to the theater of military operations, of which two military groups were formed, which after the transfer of additional reserves were structured in the form of the 5 Army of the North-Western Front.

By May 28, 1915, the northern strike group of the Nemansk army (the 1 reserve corps of K. von Morgen and E. Shmettov's cavalry corps) continued the offensive that had begun earlier in order to crush the Russian troops near Shavli. 1-I reserve division of the enemy 30-May defeated the Russian places. Kuzhi, and 31-go - Kuzovimya. 6-I reserve division took places. Daukshi, reflecting a strong night attack of Russian parts.

Shmettov's equestrian corps (6-I (28-I, 33-I, 45-I cavalry brigades), 2-I (5-I, 8-I cavalry and Leib-Husar brigades) cavalry divisions flank of the German infantry. In fact, a crucial task was set before the German cavalry: while the infantry would be hammered by Russian troops from the front, to carry out a flanking maneuver and cut off their escape routes.

The course of the movement of Shmettov's horse hull is to Popelyany.

Seeing the danger, in order to fend off the enemy’s movement, the Russian command advanced strong reserves — the Ussurian cavalry brigade, the 4 th cavalry division, the Cossack units and the troops of the 17 th infantry division of the 19 th army corps.

The German cavalry, carrying out the task, attacked the Russian part. And here, as the German eyewitness wrote: “events occurred that put an end to this cavalry operation in the enemy’s rear”. 1 of June at places. Popelyany Germans were attacked by the Russian cavalry.

The balance of forces of the opponents in the battle at Popelyan was as follows.

One of the outstanding units of the Russian cavalry was the Ussurian cavalry brigade. Parts of the brigade distinguished themselves in the Russian-Chinese 1900 - 1901. and the Russian-Japanese 1904 - 1905's. wars, brilliantly proved themselves in the First World War. Since 27 in March 1915, the brigade was commanded by one of the best cavalry commanders of the Russian army during the Great War during the Great War, Major General A. M. Krymov. The commander of 5-th Russian army of the North-Western Front, cavalry general P. A. Plehve, considering the Ussuri cavalry brigade to be a particularly stable part, used it as a selective mobile reserve capable of solving the widest range of combat missions. 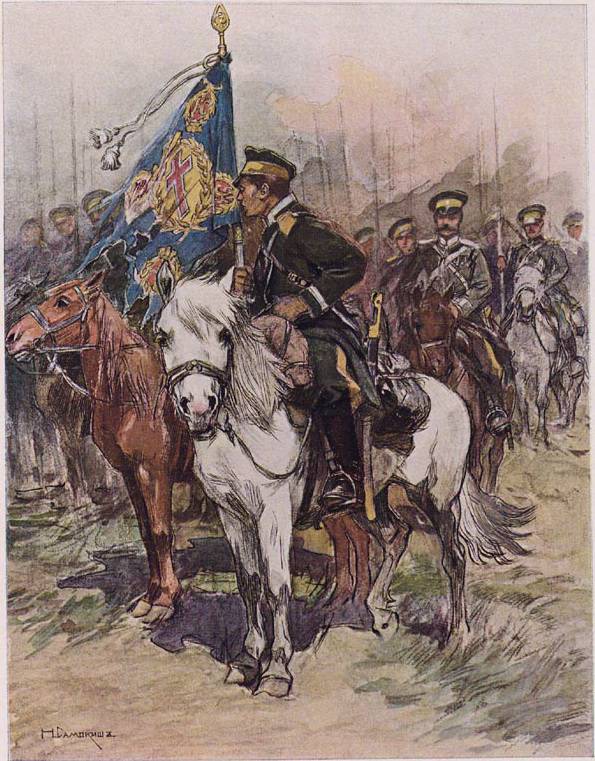 In the June battles of Popelyan, the Primorsky Dragoon Regiment of the Ussurian Horse Brigade was especially notable.

A German source describes these events in the following way: “... followed by a strong outburst of the enemy against the left flank of the 33 Cavalry Brigade of Popelyany and Kalnishki. The brigade was forced to retreat with persistent battles on Trishki, hiding behind the 1 squadron of the 9 th dragoon regiment and the 5 squadron of the 12 hussar regiment ... I had to clear Popelyany. The brigade retreated to Trishki. ”

The combat log of the Primorsky Dragoon Regiment recorded how the 1 th and 2 th squadrons of the regiment forced the river under enemy fire, overturning and destroying the enemy’s military guard at the ford, and the dragoon machine guns opened fire on Kalnyshki village.

German artillery opened fire on the crossing, but to no avail - the speed of cavalry was its best defense. Under enemy fire, Russian squadrons broke into Kalnishki: “... no less than 100 enemy horsemen pursued by strikes of dragoon peaks and drafts, but at the height of der. Our Urbanai pursuing horsemen were met by enemy fire in the flank ... and having lost several horses, partly turned into Kalnyshki, and partly rushed headlong at the shots. " The regimental commander at the head of the 3 th squadron and with the support of 5 th drove the enemy out of Urbanay. And the 5 th squadron overturned the "Thuringian" hussars with one blow (i.e. the hussars of the 12 th regiment).

Applying to the tactical situation, the Russian dragoons fought a combined battle - in Urbanay, they, dismounting, with a “checkers” strike, beat persistent Germans out of the village houses.

Russian horsemen chased the enemy in the direction of the village. Dumbra - part of them fell into the swampy area with peatlands south of the village. The commander of the Primorsky regiment reported the battlefield picture he saw at that time: “... the battlefield ... represented the following picture: individual horsemen and groups roamed and scurried across the field and bushes, clearing the terrain from the scattered enemy; who, having lost a horse, killed a German horse, who led a prisoner, the shots did not cease, some enemy fighters resisted stubbornly. There was a case when a captured non-commissioned officer, a hussar, was a few dozen steps away from the assembly point, snatching a revolver with a shot at close range, put the dragoon guard and shot himself. Two hussars, sowing surrounded in a ditch, answered the offer of delivery with shots until they were cut down. ”

As a result of this dynamic battle der. and mr. dv Kalnishki, as well as der. Urbanay were captured by the Russian dragoons.

The enemy began to retreat to the shore of the river. Venta, where he was met by fire suitable Transbaikalians. The Germans were knocked out of the village of Rymshi and Grezhi, rushing to the township. Populated under the protection of their trenches. The 1-I hundred of the Nerchinsk Cossack regiment was approaching the battlefield, forcing the river. 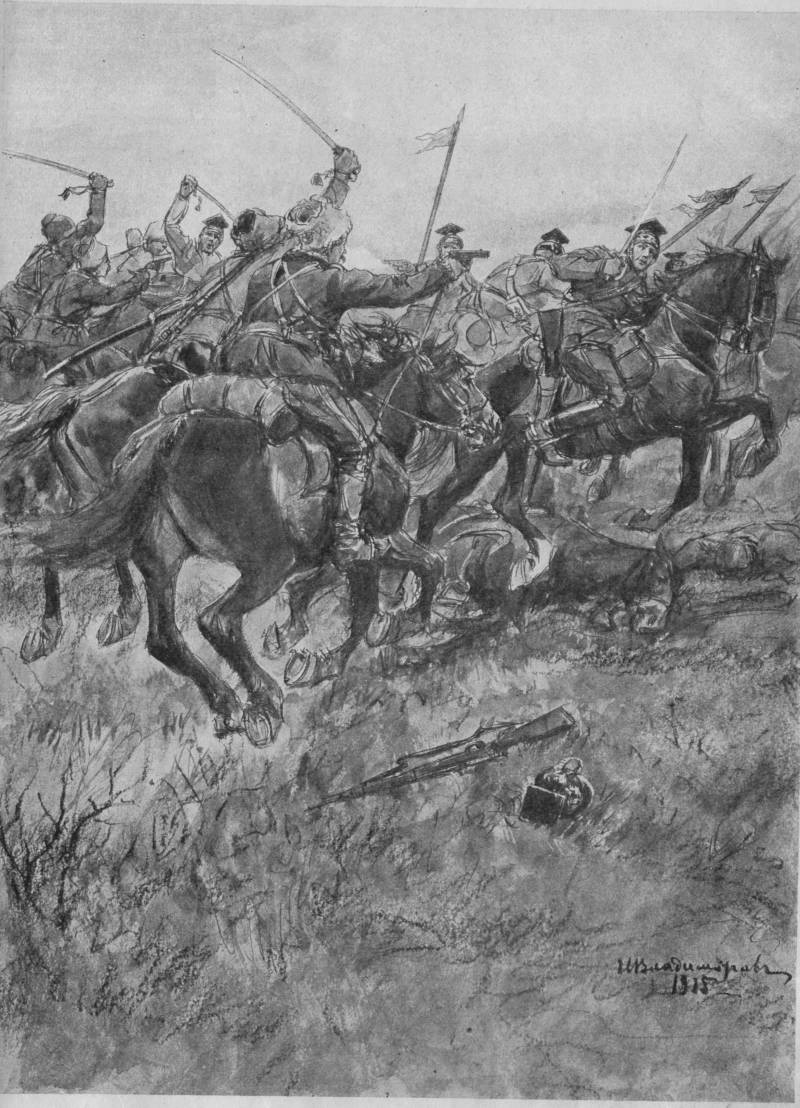 The Germans strengthened in Popelyany, turning the Catholic church into the main stronghold. Moreover, the enemy tried to counterattack, but again the 3 th and 6 th squadrons of the Primorsky Dragoons regiment were knocked off, and withdrew behind the barbed wire. Fire from the trenches in 6 squadron killed the hero of the popelyansky battle - Lieutenant Zubov and 8 dragoons who tried to cut the wire with swords. 3-th squadron blow to the flank forced the Germans to abandon the fortified position and retreat to Popelyany.

At the same time, the group of captain Shipunova seized der. Dumbra, knocking over the enemy’s half-squadron with a horse attack, attacked the enemy from the rear. Once in a semi-circle, the Germans began to depart from Popelyan to the south. 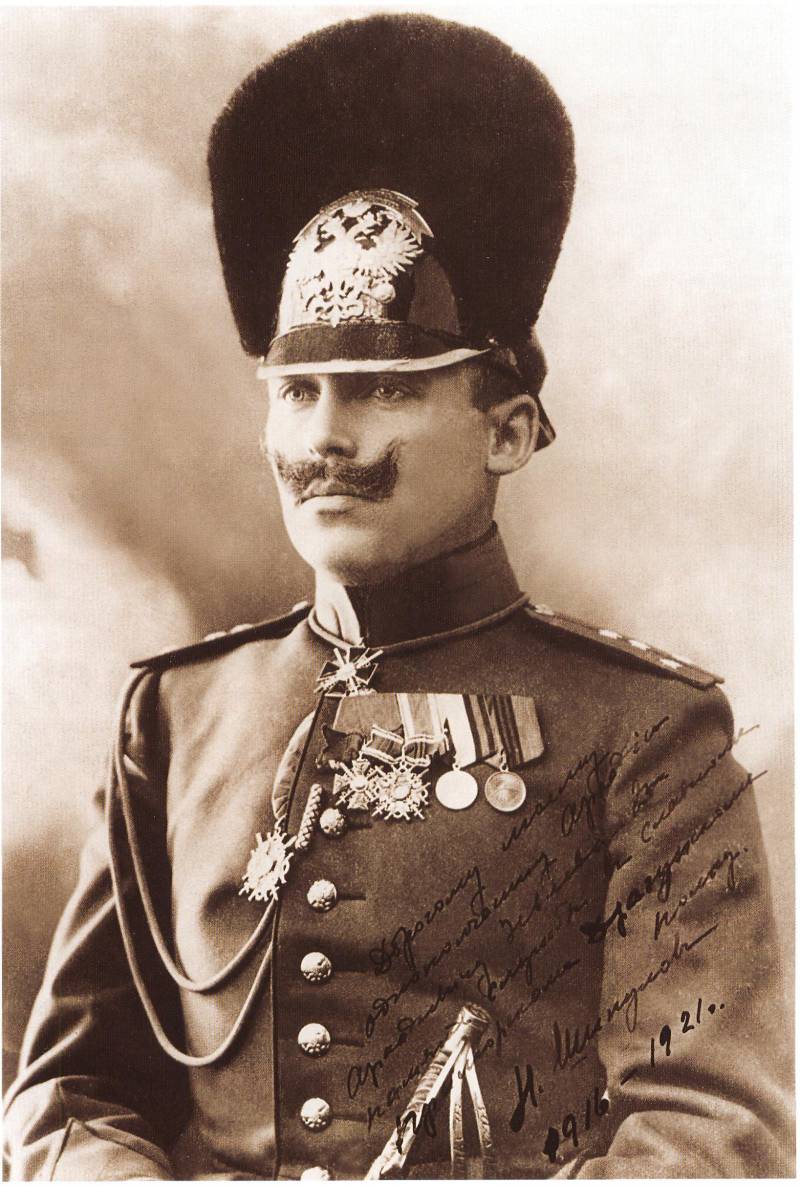 The tactical attack of the Russian cavalry represents a kind of record - the Primorsky Dragoons regiment forced the r. Venta, moving field gallop throughout 8-mi versts. In the course of the battle, frontal attacks, actions to the flank and rear of the enemy were used. When the attack did not succeed with a swoop, the dragoons methodically repeated it, applying to the conditions of the terrain and the characteristics of the battle. The initiative of the command of the unit - the regimental commander, division commanders and squadrons draws attention. The actions of the Primorsky Dragoon Regiment were distinguished by their flexibility in responding to the situation, the combination of fire, strikes with cold weapons and maneuver.

The Germans are hacked "without an account." Moreover, according to German data, the loss of only one 1 squadron of the 9 dragoon regiment amounted to 33 man. According to the testimony of the prisoners, the 9 th Dragoon Regiment completely lost its squadron to 2, and the rest of the German cavalry suffered heavy losses. Primorye trophies steel: 1 officer 12-th Hussars, 1 officer 9-th Dragoons, 48 lower ranks 9-th and 13-th dragoon regiments, 12-th Hussars, 1-th and 2-of Life Hussar regiments, 69 horses, field kitchen and 9 carts.

In fact, the Russian cavalry brigade defeated the whole cavalry corps of the Germans! Including the select hussar life brigade - so-called. "Hussars of Death." The chief of the 1 th Leib Hussar Regiment at the time of the outbreak of World War was Wilhelm Kronprinz Prussky - heir to the throne of the German Empire. 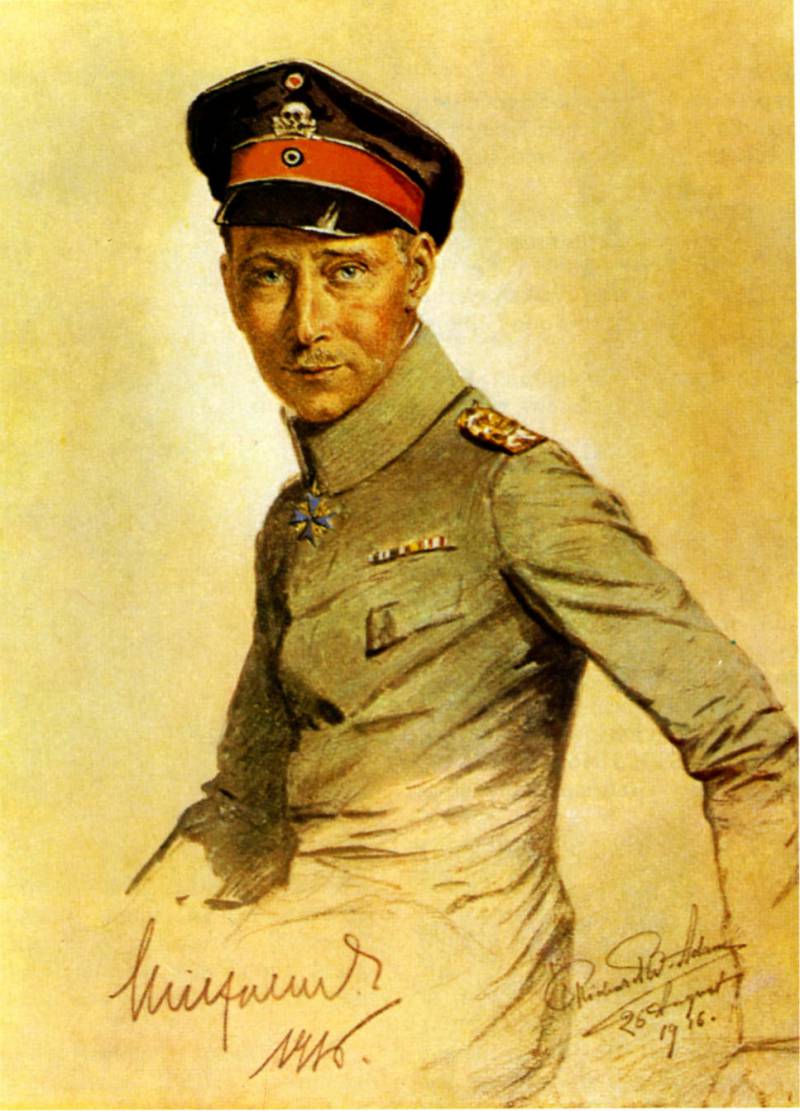 Moreover, the German infantry was also defeated - after jumping over a wire fence, the Primorsky Dragoons regiment overthrew a battalion of German rangers. 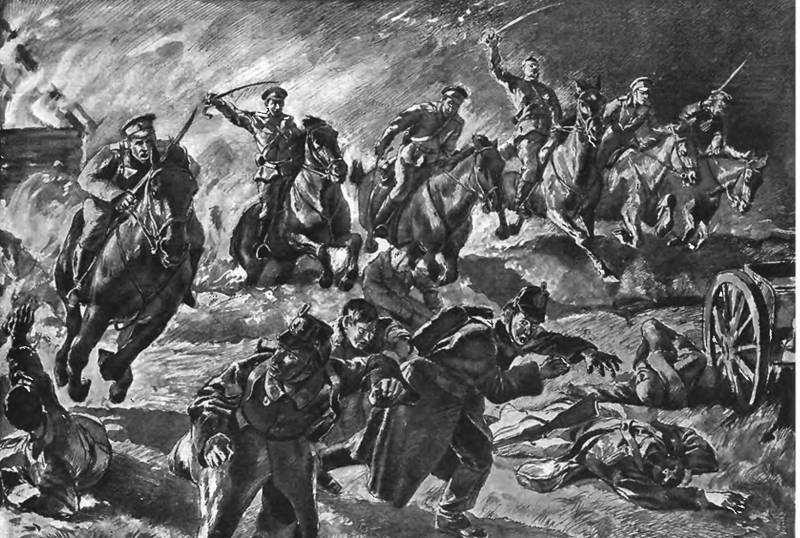 Il 5. Attack of the Russian cavalry on the village, defended by German rangers. Fig. thin R. Frentz. Chronicle of the war 1915. No. 39.

The attack on Popelyan on June 1 of 1915 was of major operational importance. The covering maneuver of the German troops (Shmettov's cavalry corps) was paralyzed and the advance of the infantry (Morgen corps) was stopped. 1-th Reserve Corps stopped the offensive and went on the defensive - he was ordered to gain a foothold and hold the occupied lines. Under the influence of these events, the command of the German Eastern Front promised to the command of the Neman army to send reinforcements consisting of: 3 and 41 infantry divisions, 29 brigade of landsturm and 8 cavalry division. As the German source shyly noted: “The Neman army was now confronted with the task of retaining the won space for the near future until there was an opportunity for a new offensive for further rejection of the northern Russian flank.”

The situation in the Shavel direction has stabilized. Opponent almost a month went on the defensive. Stabilization of the front in the Baltic States — the Russian cavalry of the North-Western Front worked on this crucial task as part of the 1915 summer campaign, which was difficult for the Russian army.

If the German cavalry fought almost exclusively with firearms, the Russian cavalry practiced strikes with cold weapons, trying to achieve a breakthrough of the enemy front, attacking in cavalry. Attacks in the horse ranks assumed a high combat level of the unit, the determination and valor of its personnel, the achievement of tactical surprise.

All these prerequisites existed among units of the Ussurian horse brigade. Its units not only successfully combined firefighting and combat with cold weapons, carried out saber and bayonet attacks, were able to operate in the field and settlements, fought in equestrian and on foot. They harbored a special love for equestrian attacks - the Primorsky Dragoon Regiment from May 25 to June 11. 1915 conducted seven such attacks (by the forces of the entire regiment and individual squadrons). And this is under the conditions of the so-called. "Modern war", gradually eliminating the cavalry from the battlefield. The command of the brigade skillfully achieve tactical surprise, competently operated with horse masses in battle.

It was the Russian imperial cavalry in the First World War, unlike the cavalry of other armies, that had completed cavalry attacks. And one of them is the immortal equestrian attack of the Primorsky Dragoon Regiment at Popelyans 1, June 1915.