What awaits the Middle East after trump's victory 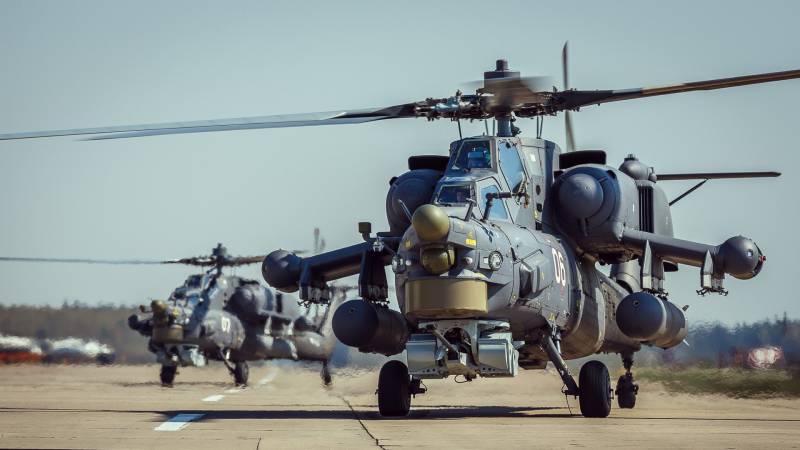 According to Trump, America’s responsibility to protect other NATO countries should not be considered unconditional. He promised to “bomb into the ground” (without explaining what it means) IG (prohibited in the Russian Federation) and regretted that the American troops had not captured the Iraqi oil fields. And the hero of the day believes that the billions invested in operations in the Middle East did not pay for themselves. And the first thing that should be expected from the coolest financier of our time is a sound investment strategy. Especially in terms of interventions and the implementation of the functions of the MIC.

Syria. First of all, I would like to note that Trump "is not against the fact that Russia inflicts airstrikes on the positions of IS militants in Syria." This means that in his interests a uniform distribution of influence of the Russian Federation and the United States in the Middle East. As I recalled above, Trump's task is to control Iraqi oil. And he well understands that all the efforts that Moscow has put in order to preserve the balance of forces in the oil market have not been in vain. Unlike Clinton, Trump, with his isolationist and reactionist policies, has the goal of protecting his goals, but not interfering with the interests of others. Therefore, in all that concerns the oil markets, for Russia in the long run, Trump is a lucky ticket. The temporary short-term reaction of the stock exchanges to the election results is only a surprise effect, which in the future will be more than offset by growth.

The fact that Obama did in the last months of his presidency (and, perhaps, will still do it until January) is the fulfillment of the interests of those elites who lost in the current elections. Including the provision weapons to Eastern Europe and the Middle East, the law against Saudi Arabia and other actions emphasizing the exclusivity of the American Democrats. It is unlikely that the current US President Barack Obama will be able to resolve the issue of the Syrian president in one month (unless, of course, Assad is not preparing an assassination attempt), which means that the “shares” of the Syrian militia are about to collapse.

I dare to suggest that the AP knew the outcome of the US election, otherwise the Russian flotilla It would hardly have been sent to the Syrian coast. Now, literally without fear and doubt, you can complete the liberation of Aleppo and move on to cleansing Racca.

By the way, Trump is happy and Erdogan.

And it is not surprising, considering how well and qualitatively the American leadership, under Obama, sponsored Turkish and Syrian Kurds. Well, if you remember history with the Gülen coup, then Trump for Erdogan is an excellent path to the much-desired Islamization of the country. This means that the operation “The Euphrates Shield” can be fully implemented. Then the Kurds will be pushed back, if not to Iraq, then precisely far from the Turkish-Syrian border. And here the question again arises whether Syria will be able to avoid federalization or its territory after getting rid of terrorists following the example of Iraq will belong to several national associations at once. 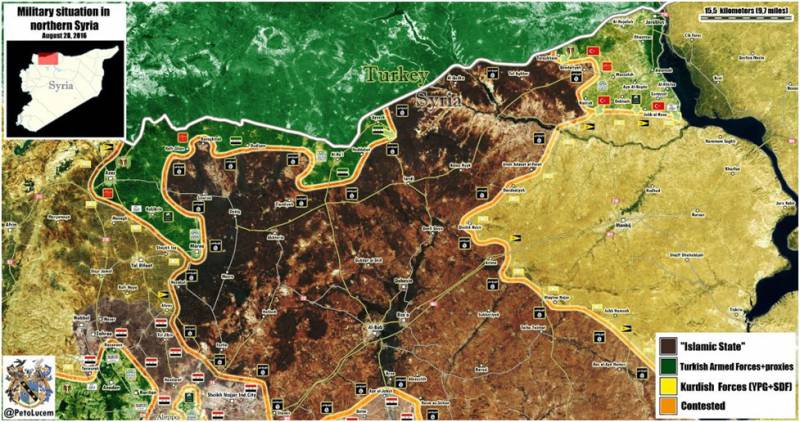 Saudi Arabia and Iran. Perhaps the most uncertain outcome can be expected in Yemen and KSA. Without the intervention of the States (and the intervention in Yemen is clearly unprofitable), the KSA will take control of this small country. That is, there is a high probability that the KSA goal of controlling the Islamic world will begin to be realized. And since the confrontation of Shiites, Sunnis, Alawites and smaller Islamic movements regularly leads to the emergence of radical groups, any competition with KSA (which will be even more without US help) will cause new wars and new sabotage.

Restricting Arabia in its economic and ideological ambitions will be not only arrogant Turkey, but also in the long term a growing Iran (Iran and KSA are very serious and extremely evil opponents with respect to each other). The fact is that in Trump's plans there is not only the absence of sanctions against Tehran, but also cooperation in the field of the atom. This is one of the cardinally opposed to the current American views point of view. And Trump is very clever at this. The fact is that while there is a war for traditional sources of energy, Russian corporations are extremely successful in monopolizing the peaceful nuclear market, and US cooperation with Iran can seriously spoil this bright picture. But do not forget that Trump is a businessman, and you can sometimes agree with businessmen.
“Trump does not agree with the thesis that America’s mission is to correct this imperfect world beyond its borders by any means. He, characteristically, is really not an interventionist. ”. Donald Trump is not an interventionist, he is an investor. And sometimes it is much worse ...

Iraq and the operation in Mosul. # Lose it. The victory of the American troops in Mosul should have been the logical conclusion of the operation against terrorists before the elections. The goal of the “liberation of Mosul” is to prove the greatness of American weapons and the ability of the US Army to solve any problem with an easy hand. Did not work. This is not widely talked about yet - Trump’s hype around the victory has eclipsed all other information channels, Syria and Iraq have also faded into the background. Nevertheless, the failure of the American operation in Iraq is no less serious than the failure of Hillary to the American voters.

If we talk about what will get Trump after the previous leader of the country, then we can safely talk about the first serious decisions that will test the Trump administration for managerial skills. The fact is that from April to September 2016, 1175 was sent to Iraq by US Army troops. And just before the storming of the capital of the IG, 560 elite commandos were transferred to Mosul. But as a result of the counter-offensive, which was organized by the terrorists, the losses of the USA amount to 20 people killed and 32 people injured. American special forces, fighting on the front line along with Iraqi troops and Kurdish troops, take the brunt of themselves, getting under attack from mortars and using cars filled with explosives. Meanwhile, catastrophic mistakes led to a disastrous result: two special forces were killed in the so-called "friendly fire" - American aircraft B-52H caused air strikes on the suburbs of Mosul.

That is, the coalition operation is now on the verge of failure. And instead of triumph, we can expect shameful capitulation that does not agree with Trump’s plans to control Iraqi oil.
First, Trump did not deny that it was possible to invade Iraq and “the death of the soldiers would be compensated for by the oil revenues”.
Secondly, the control of Iraq is so sick of corn for the United States that the implementation of the idea of ​​victory in this country would not give rest to both Clinton and Trump.

Only now the invasion of Iraq is a clear increase in oil prices. And in general, as long as the operation in Mosul failed, there is no reason for a sharp decline in oil prices. And only when the States will be able to control the main transportation routes and production, at least in Iraq, will they be able to play on the price. In the meantime, I recall one small detail: 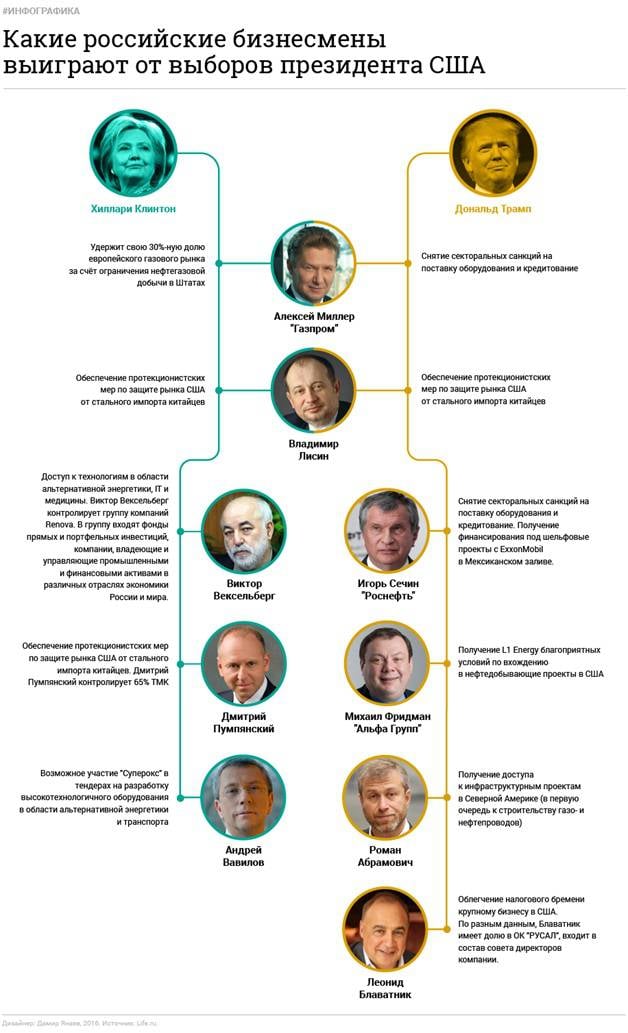 Total Trump will bring pinpoint attacks to the Middle East, but will add freedom to regional powers and their partners. Together with his ardent election zeal to fight terrorists, this can give an excellent result not only in Russia, but also in Europe, and the Middle East itself.