November 9, 2016
165
The presidential campaign in the United States was not only tense, but also scandalous. Even without the “Russian hackers” it didn’t do: they say that the president of the United States is trying to choose none other than Comrade Putin, and the elections are not held in America, but in the Kremlin. H. Clinton hinted at this. In turn, D. Trump scolded his rival on Twitter in such terms that his advisers were forced to excommunicate the overbearing billionaire from Twitter. 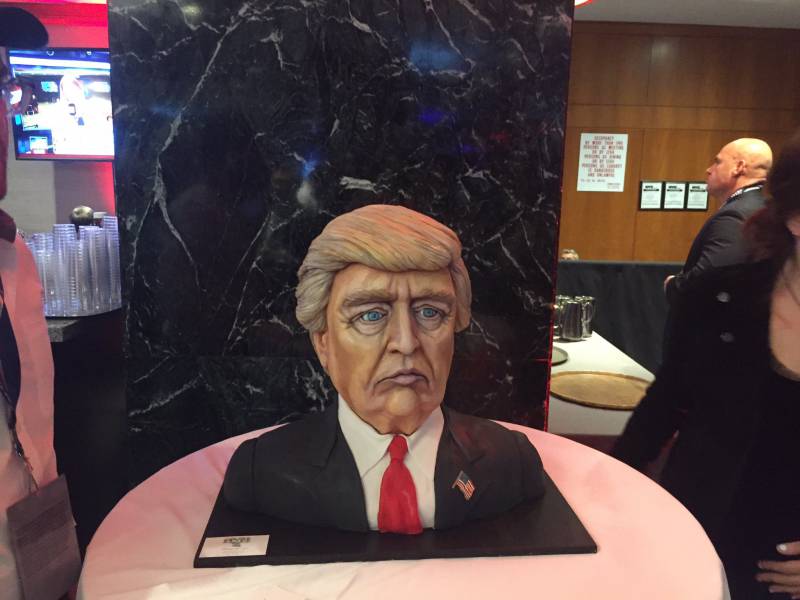 In case of Trump's victory at Clinton headquarters, they were preparing to say that Trump was chosen by the Russians. In the event of Clinton's victory, other Republicans intended to declare the election results invalid, or even to start something like the “American Spring” in the country. Against the background of this election struggle, pacifist analysts warned: H. Clinton is capable of unleashing a nuclear world war.

Presidential candidates have been overwhelmed to the point that some voters considered them both liars and dishonest people in general. On the eve of the elections, many voters simply turned away from "their" candidates.

Neither Hillary Clinton nor Donald J. Trump is able to return the country to national unity, voters said in a recent poll. "New York Times" and "CBS News Poll".

More than eight out of ten voters said the election campaign disgusted them. Both Clinton, the Democratic nominee, and Trump, the Republican nominee, were viewed by the electorate as dishonest political figures. Most voters spoke about them unfavorably.

According to the survey, the alignment on the eve of the elections was as follows: Hillary Clinton supported 45% of potential voters, and Donald Trump supported 42%. Gary Johnson (Libertarian Party) slipped to the level of 5 percent, and Jill Stein, the candidate from the Green Party, is at the level of 4%.

Among women, H. Clinton had a major advantage compared to her rival - in 14 points. However, Mr. Trump led 11 points among men.

Recall that it was the data of the latest survey “New York Times” and “CBS News Poll”.

This morning, at 06: 30 Moscow time, the chances of Donald Trump to win were estimated by the large American press quite high: at about 80%. Two hours later, this level increased to 95%, as the arrows on the indicators show "New York Times". 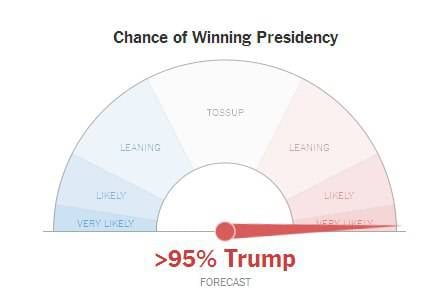 The most interesting thing is that on the eve of voting this newspaper predicted Hillary Clinton win with a probability of 85%. It can be said, the forecast came true exactly the opposite.

For a complete victory, we recall, the candidate must enlist the support of 270 electors: such is the indirect democracy in the United States. November 8 Americans vote for electors, and not actually for Trump or Clinton. And to win, a candidate needs to enlist the majority of their votes (at least 270 from 538).

The electors themselves will vote much later, December 19. The results of their voting will be approved by Congress at all next year, January 6. However, this is only a formality.

Then the president will be inaugurated (scheduled for January 20). After that, the elected president will take office, and Barack Obama, who “served” 8 White House for years, will finally leave the Oval Office.

The outcome of the vote was decided in nine states that had not previously decided on the choice (the so-called vacillating states). These are Arizona, Michigan, Minnesota, Nevada, New Hampshire, Pennsylvania, Wisconsin, Maine, Alaska (in this state the vote ended last, however, due to its small population, it is hardly decisive).

It is the listed states that were supposed to determine the outcome of the race, which no expert could predict against the background of low trust ratings of both Trump and Clinton.

In the last hour, the states of Nevada (in Clinton’s pocket) and Pennsylvania were determined, where the struggle was especially unpredictable (something like a “draw” result was expected, and this staff is densely populated and very important for victory: it gives two dozen electors to vote) . On 8: 30 in Moscow in Pennsylvania was given exactly 48,2% of votes for Trump and Clinton. 2,4% and 0,8% drew off the libertarian candidate Johnson and the green candidate Stein. In fact, one Pennsylvania could give Clinton the opportunity to catch up with Trump, or Trump could overtake Clinton so that she would not be able to get around him. The fight was hot!

At the same time, the agency Reuters tracked the path of candidates in the elections, building a schedule. 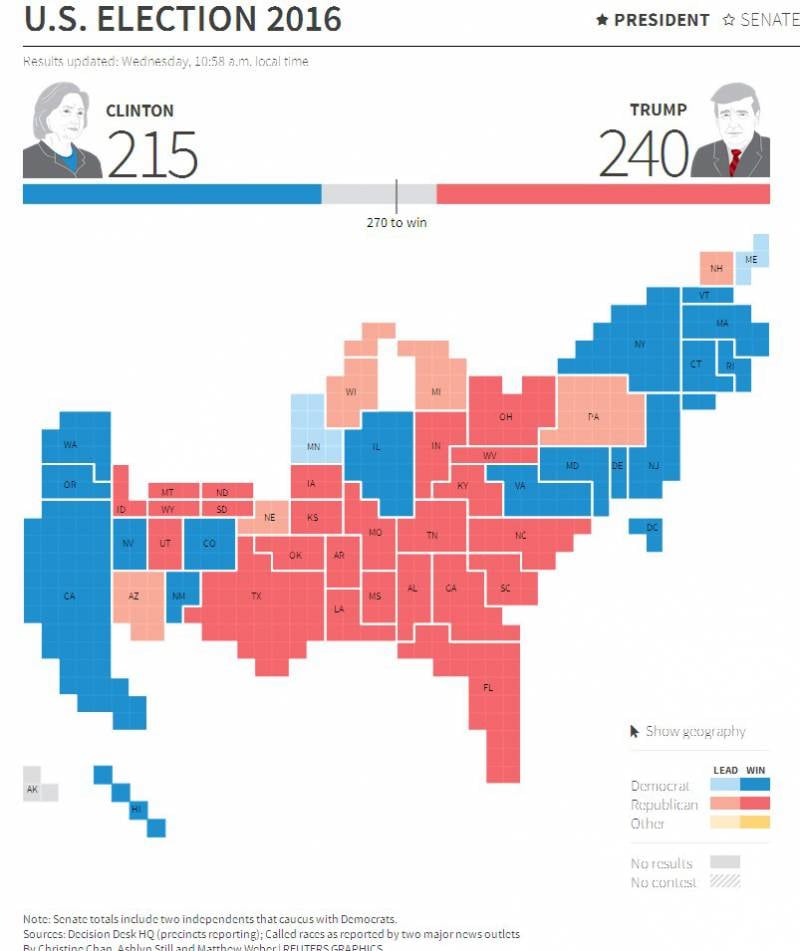 В "Twitter" The agency said the following about this: "See how it’s up to the White House." That is, it was proposed to see how Trump opened his way to the White House. In essence, Reuters declared Trump the winner in the elections before the summing up in Pennsylvania and some other important states.

The decisive states were the mentioned Pennsylvania, Michigan and Wisconsin. These states could give victory to Hillary Clinton, but gave it to Donald Trump. Pennsylvania brought Trump 20 electoral votes. The gap made up 215 electoral votes for Clinton versus Trump's 264. 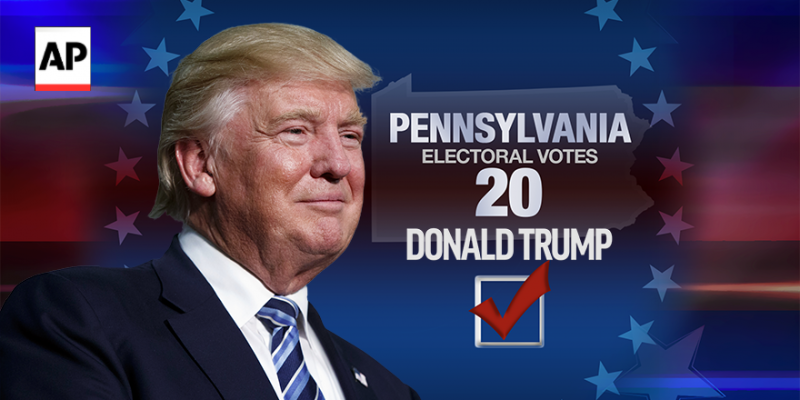 264 the votes of the electors from 270 necessary, we note, mean almost one hundred percent victory in the elections.

After winning in Pennsylvania "Twitter" Resource “West Wing Reports” reported that the alleged winner of Trump on Thursday could meet with President Obama at the White House.

At the time this article was published, Trump had 266 electoral votes, while Clinton had 218.

Democrats this time no luck. Apparently, Clinton will stay in stories as a political loser.

In the November 8 elections, Americans voted not only for the future president, but also for those who will represent their interests in both houses of Congress: 34 from 100 seats in the Senate and all 435 seats in the House of Representatives were put to vote. "Voice of America".

Republicans were expected to retain a quantitative advantage in the lower house of Congress (they now have 247 of 435 seats).

About a third of the seats in the Senate are eligible for re-election every two years. This year, Republicans stand for 24 seats from 34.

On 8: 30 Wednesday, Moscow time, the picture was as follows: 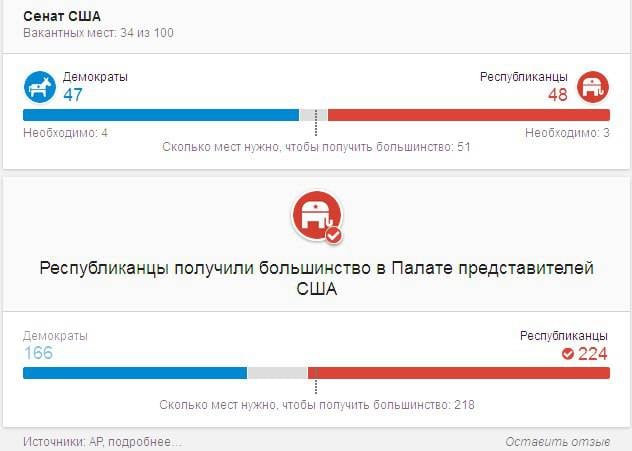 Republicans got a majority in the US House of Representatives. Source: Associated Press, Google

Thus, Republicans have a majority in the House of Representatives, which should provide Trump with relative convenience in making political decisions. Democrat Barack Obama didn’t have this comfort: when many programs were carried out, criticism of Republicans fell upon him. This is partly why he was known as a wimp.