Media: For half a month there was a second emergency with a submarine in the Northern Fleet

January 20 2012
28
On Saturday, January 14, a fire was recorded on the Cheetah submarine, which stood at the pier in the dock belonging to the 10th ship repair plant located in Aleksandrovsk in the Murmansk Region. This is the second state of emergency in the past half a month. The fire was quickly eliminated, so the boat equipment was not seriously damaged, but the possible damage has not yet been established. None of the team was injured. Several sources have reported this incident in recent days, however, information on it has not been officially confirmed either by the Ministry of Emergencies or by the press service. fleet.

Most likely, the representatives of the nationalist Internet resource “Sturm” received this information first, who posted a brief report on 16 in January, without citing sources. Moreover, the message was written in the “specific style” used on the site, which is why news and not widespread.

The report said: “Workers worked in the fourth compartment, cleaning the reversible transducer with alcohol. The carrying lamp accidentally fell onto the deck, and a fire occurred. The compartment was extinguished by double feeding into the LOCH compartment (bulk chemical system for extinguishing bulk fires). ”

And on Wednesday, January 18, there was a message about the fire that occurred at the Gepard nuclear submarine in the Murmansk edition of Komsomolskaya Pravda, citing its own “credible sources from the security forces of Aleksandrovsk. According to the data published in the message, an alcohol-containing liquid was used to clean one of the compartments. In this case, the compartment was lit with a portable lamp. During operation, the lamp has fallen, and alcohol vapors are ignited. Fortunately, not far from the compartment there was a special means for extinguishing fires, which were used in time.

Murmansk "Komsomolskaya Pravda" clarified on Wednesday that the fact of the fire occurred at the plant is denied. The head of the press service of the Northern Fleet, Vadim Serga, also did not confirm this incident. According to him, there have been no cases of fires or fires registered on any of the ships of the Northern Fleet in the past few weeks.

Despite the lack of official confirmation, the Kommersant newspaper also confirmed the fact of a fire that occurred on Saturday during a technical inspection. The newspaper refers to sources in the shipbuilding industry, who stressed that only civilian specialists, not military, were to blame for the incident.

A number of tasks during the inspection was assigned to civilian specialists. One of them consisted in rubbing with alcohol some NPS units for their cleaning. During processing and cleaning of the reversible transducer, using a portable lamp for lighting, one of the workers accidentally dropped it, and it crashed. This was enough to ignite the alcohol vapor.

He confirmed the version of the fire in the fourth compartment and the source of the publication from the Ministry of Defense. He said that only for one reason did not further spread the fire: the freon-type fire-fighting system worked twice. However, no damage to the equipment of the boat due to the possibility of radiation leakage occurred. Also remained intact people who were at the time of ignition in the compartment.

However, the information obtained by the “Merchant” states that it is impossible to completely exclude the option with a negative impact on the reversible submarine converter, which serves to provide emergency power to all volatile devices with low consumption currents from the backup source with decreasing voltage. According to experts, if the equipment is still out of order, then it can take at least several months to replace it.

Representatives of the military department clarified that the leadership of the Northern Fleet created a commission to establish the possible extent of damage. In addition, the fact of fire was checked by the main military investigative department in the Murmansk region, which confirmed the guilt of a civilian specialist in the incident. In this regard, the investigative committee, which may later be prosecuted under Article 347 of the Criminal Code of the Russian Federation “Destruction or Damage of Military Equipment through Negligence”, will take over its own audit.

However, it should be noted that if we take into account the exact wording of the article, according to which the maximum penalty is two years in prison, it sounds like this: “Destruction or damage by negligence weapons, ammunition or items of military equipment that entailed grave consequences, ”while the incident with the submarine“ Cheetah ”does not fall under it.

It is worth remembering about another case of fire that occurred on December 29 on the Yekaterinburg submarine, in the 50 special floating dock 82 of the ship repair plant, located in Roslyakovo in the Murmansk region. The elimination of fire took as much as 20 hours.

The preliminary version states that the fire originated during the work with the autogenous: because of a spark, the wooden scaffolding that had been mounted near the submarine caught fire. The fire quickly spread to the light outer skin of the submarine, covered with a special anti-hydrolocation rubber coating.

According to the data from the Emergencies Ministry, during the fire on the "Yekaterinburg" nine people were injured, of whom seven were crew members, and two were employees of the department.

President Dmitry Medvedev became interested in this case, who instructed the vice-premier Igor Sechin and Dmitry Rogozin to investigate the incident. Rogozin, in turn, promised that all the guilty will be found and punished immediately after the completion of work on the investigation of the incident. 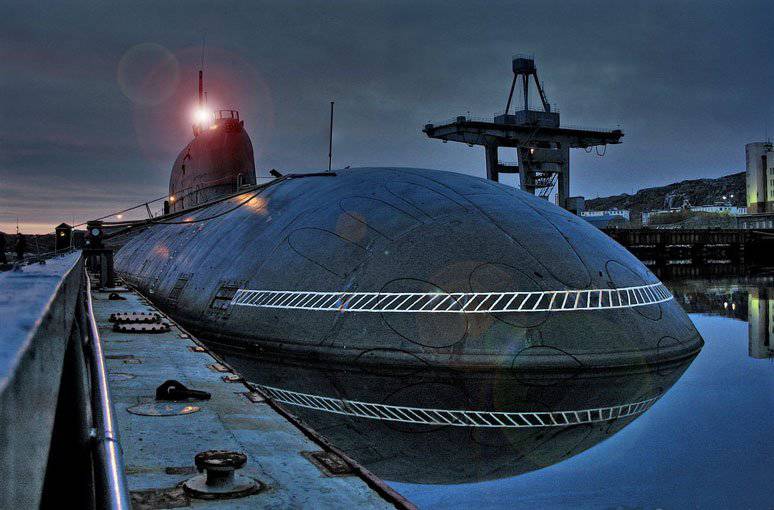 K-335 "Cheetah" is a nuclear submarine, created in the framework of the project 971М "Pike-B". It belongs to the third generation of the Premier League. We laid the 23 September boat 1991 on Sevmash in the city of Severodvinsk. 2 February 1993, the boat received the name "Cheetah" and entered the lists of the ships of the Navy. On the water "Cheetah" launched 17 September 1999 of the year. She joined the 24 Division of nuclear submarines in January 2002. The crew of the submarine is 73 man, and the home port is Gadzhiyevo.

Some technical characteristics of the third-generation submarines are the following: 12770 tons of underwater displacement, 110.3 meters in length, 13.5 meters in width, 9.6 meters in draft. Able to develop under water speed up to 33 nodes. The nuclear power plant has a capacity of 50 thousand hp It has four 650 mm and four 533 mm torpedo tubes.

President Vladimir Putin participated in the flag raising ceremony at the Cheetah, which took place in December 2001. The submarine commander is Kirill Shport, guard captain of the 1 rank. Patronage on it is carried out by the company "Rosneft".

The Ministry of Defense (Ministry of Defense) of the Russian Federation refutes media reports about the ignition of the Northern Fleet’s nuclear submarine Gepard. As reported by RBC press secretary of the Western Military District Andrei Bobrun, the information published in a number of media outlets that a fire allegedly happened on the boat does not correspond to reality. "Only the fact of ignition of a crashed portable lighting lamp during the performance of work in one of the internal spaceships of the nuclear submarine took place. As a result, the LOH system (boat volume chemical fire extinguishing system) was activated, which reacts even to minor temperature changes in the submarine compartments," A. said Bobrun.

He stressed that this incident did not cause any damage. This case does not belong to the category of fire or fire. Currently, the crew of the submarine continues to carry out activities in accordance with the plan of combat training and the daily routine of the ship in the base of the Northern Fleet.

According to the media