Holiday "invisible" soldiers. To the Day of Military Intelligence of the Russian Federation 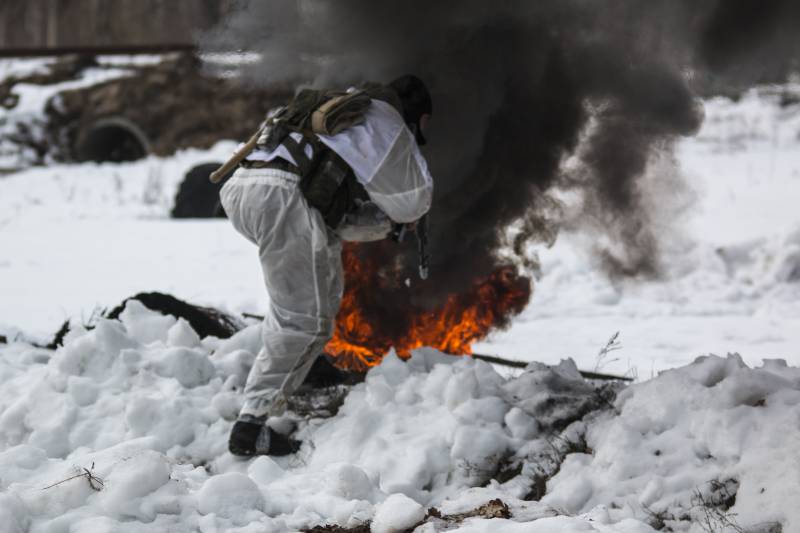 So many legends and inventions, how many go about these people, probably, it is not thought up about one military specialty. On November 5, military intelligence officers will celebrate their holiday on 10. All those who are somehow connected today or have been connected with military intelligence in the past will gather around the table, remember something, will tell the next “tales”. Drink the traditional one hundred grams, remember the dead friends.

I had to be at such "parties". And it always amazed how much the image created in our heads by films and the memories of eyewitnesses is not true. Yes, among the operational-tactical intelligence link, you can meet quite impressive in size and strength of people. But not "Schwarzenegger" for sure. Strong, big people. With good sports training.

But in the strategic intelligence link ... Complete break in the pattern. Ordinary, often gray, men, which are many on the street. More often kind, than "with steel characters". You will meet such on the street and even thoughts will not arise that he is involved in some serious military affairs. But precisely these guys traveled around the world in Soviet times. Worked in the armies of many countries.

Frequently asked about the date itself. What was the "point of reference" for the new holiday? After all, intelligence has existed exactly since the first army appeared.

Indeed, the история military intelligence began in the distant year already 1654 under Tsar Alexei Mikhailovich. It was then that the first specialized order was created in Russia that was engaged in intelligence - the Order of Secret Affairs. Moreover, we must pay tribute to the commanders of the time, the order became one of the most effective governing bodies of that time.

Further, the story has evolved. State intelligence status was granted in 1716. Emperor Peter the Great legally established the status of military intelligence officers in the “Military Regulations”.

So where did the date for November 5 come from? This date is the legacy of the Red Army. it was in the Red Army that the Field Headquarters of the Red Army of the Revolutionary Military Council of the Republic was created. This decision was made by 1 on November 1918 of the year. And on November 5 the order of the Revolutionary Military Council of the Republic No. 197 / 27 was issued. It was this order that became the basis for the creation of the administration, which became the prototype of the GRU: Registration Office for coordinating the efforts of all the intelligence agencies of the army.

Called the first organ of the Republic in accordance with the revolutionary trends - Registerrupp.

Many are aware of the intelligence activities of the GRU. More precisely, they assume. But few people know that the famous and scary for the spies of the enemy and their accomplices, "Smersh", created in April 1943, was also organizationally part of intelligence.

Most people who are not associated with such organizations are firmly convinced that military intelligence officers are engaged in issues related to the armies of other states. If the military, then it is specialists in military matters. However, this is not the case.

The “eyes and ears” of our army today are equipped with the most modern equipment and weapons. Information for intelligence today is available in the widest range of possibilities. From the ocean depths to space. But the old, traditional methods of intelligence no one forgets. The intelligence network of the GRU is quite a serious argument in disputes with the opposing party.

Particular attention would be paid to the GRU special forces. This year, this structure is 66. Yes, total 66! The special divisions of the GRU USSR were created in 1950 year. Talk about the number and composition of units of this structure today is not possible. The composition and number of such units is strictly secret.

But what they are capable of sometimes gets into the press. Then in one, then in another country, events occur that can only be called as a “miracle”. Dictators die, arsenals of armies that are ready to attack neighboring states explode, terrorists miraculously become agreeable negotiators and release hostages, the allies for some reason begin to fight each other instead of a prepared operation to seize something.

It is difficult to overestimate the activities of military intelligence officers. You can underestimate, by virtue of the secrecy of most operations. But it was precisely military intelligence that stood and was at the forefront of the defense of Russia. It is the scouts who will be the first to report the impending attack or sabotage. That scouts will help find the gang of terrorists. That intelligence in peacetime really are at war.

I would like to touch on a topic that is widely heard today in most media. At the hearing thanks to the intelligence department of the Armed Forces of Ukraine. The theme of the emblem of military intelligence. Many people remember and saw the popular bat on the background of the globe. The emblem of the Soviet intelligence. 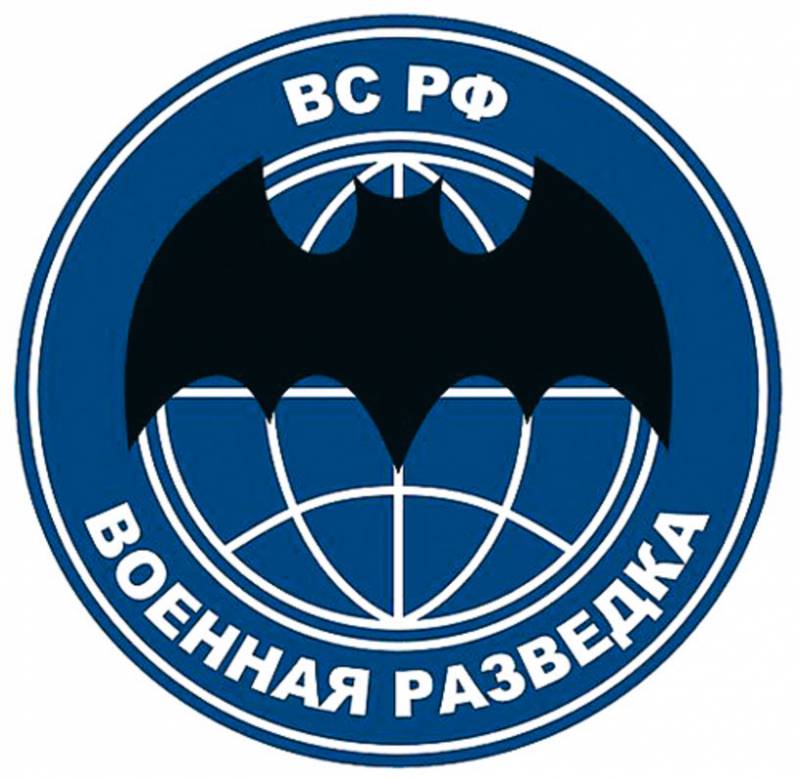 By the way, this sign has never been the official emblem of the GRU. There is no order to approve it as such. But the order to wear the uniform and emblems of the units and divisions of the garrison is. So, military intelligence officers have always been tankers, paratroopers, gunners and other representatives of the garrison majority. And the mouse, it seems to me, appeared already at the end of the 20 century. More precisely, at the end of 80-x - the beginning of 90-s.

After the adoption of the new Federal Law "On Military Duty and Military Service" 11 in February 1993, where the obligation to designate the belonging to a type of troops with non-uniform chevrons appeared, many "bestial" emblems appeared. Echoes of this event you can see today on any beach in Russia. Wolves, scorpions, eagles ... Against the background of the emblems of the Airborne Forces, the globe and other things ...

Therefore, in the 2002 year, the GRU adopted the official emblem - a red carnation against a black background and a grenade in the center. But on the floor in control of the GRU of the Russian Federation the mouse "still" lies! But next to the wall is really a carnation. 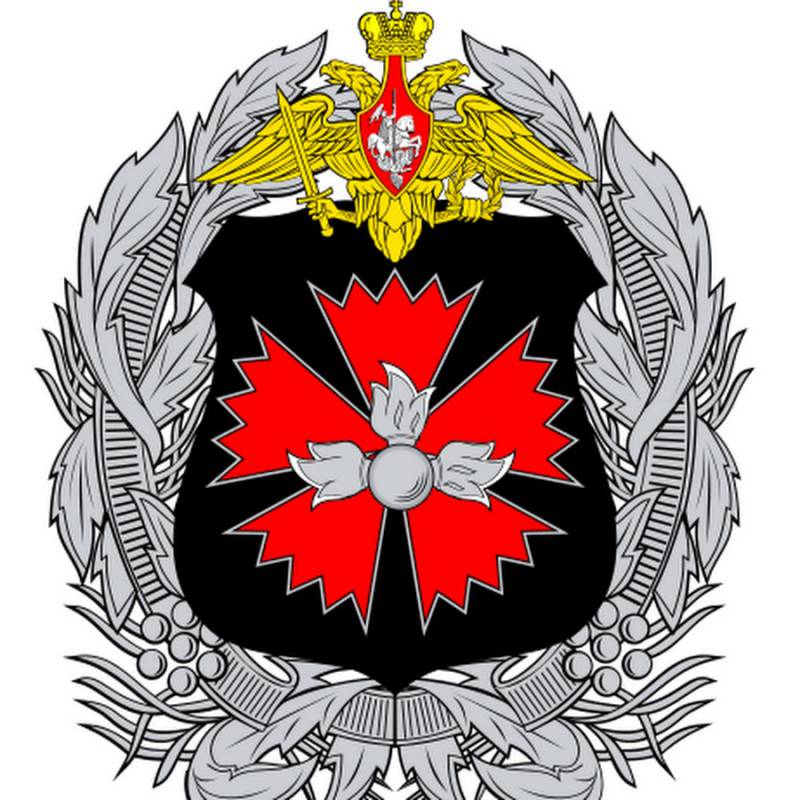 We have already written about the difficult everyday life of army intelligence. The fact that these guys are the elite of our armed forces is indisputable. Training, training, exercises. And absolute closeness. 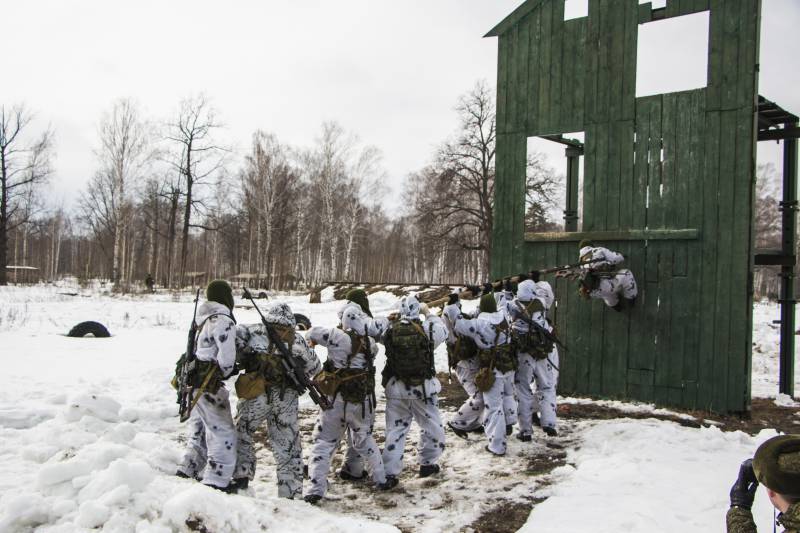 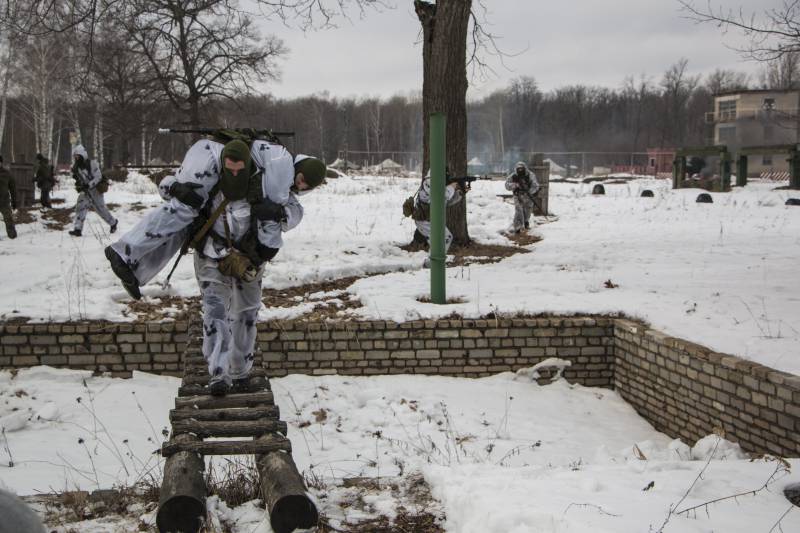 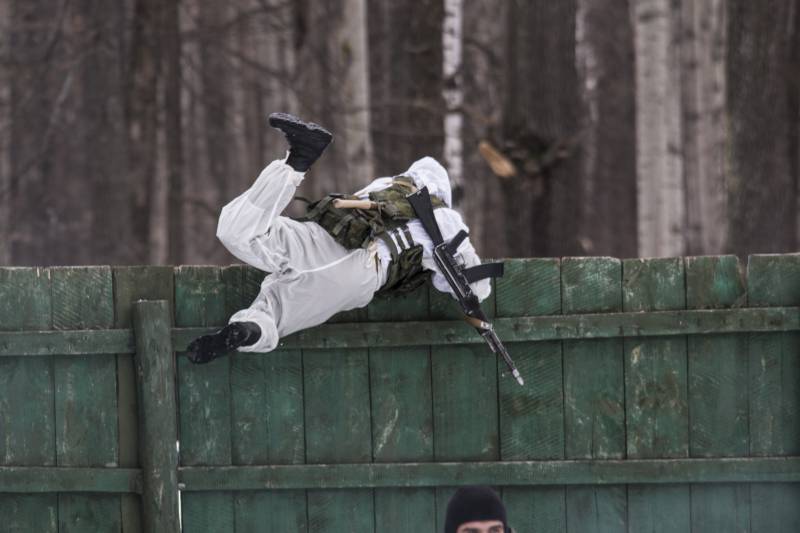 And it so happened that right on the eve of the holiday, on the training ground, where the next exercises were held, we, without even knowing it, were the first to come over for reconnaissance. 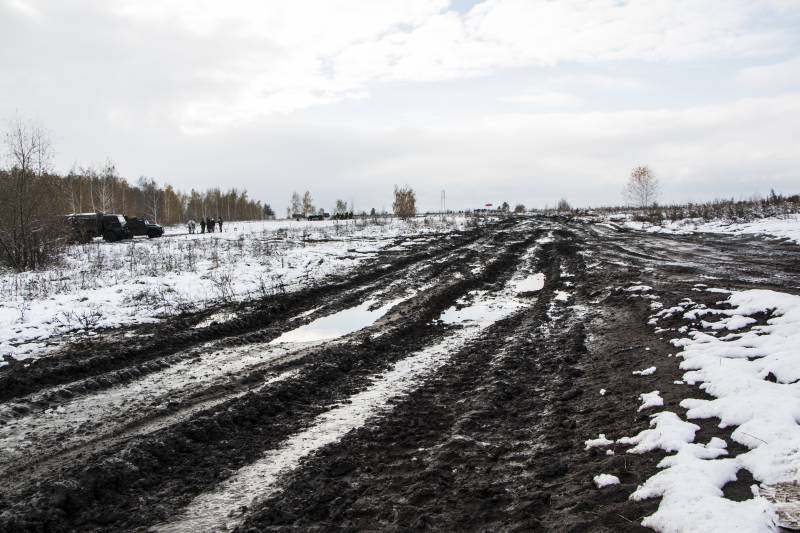 Good roads rarely lead to interesting places. And on the landfills, the more there, the nastier - the more informative at the end. And at the end of this direction, if I may say so, we saw buildings that weren't there last time. Well, we decided to drive up, the benefit, it seems, the direction quite allowed.
Two merry women in dirty white overalls over the “Gorki”, fully equipped happily, told us that we had arrived and taken prisoner. Yeah, right now ... With the support of a spokesman for the ZVO prisoner, we captured a reconnaissance group of a separate intelligence unit of one of the ZVO brigades based in the neighboring area.

We did not know that over the past two weeks this range was significantly expanded in size and became a place for working off combat missions with all nearby units, since it now allows you to work with warheads for everything from mortar to self-propelled guns.

We started with a hut. The situation has not been completely clarified; from intelligence to hammer out any information is something else. But as we understood, the guys were too lazy for the sake of one night to carry these huge tents. And even more so, they first put, and then disassemble. And then the winter began with all the special effects.

I had to equip myself more equipped overnight ... 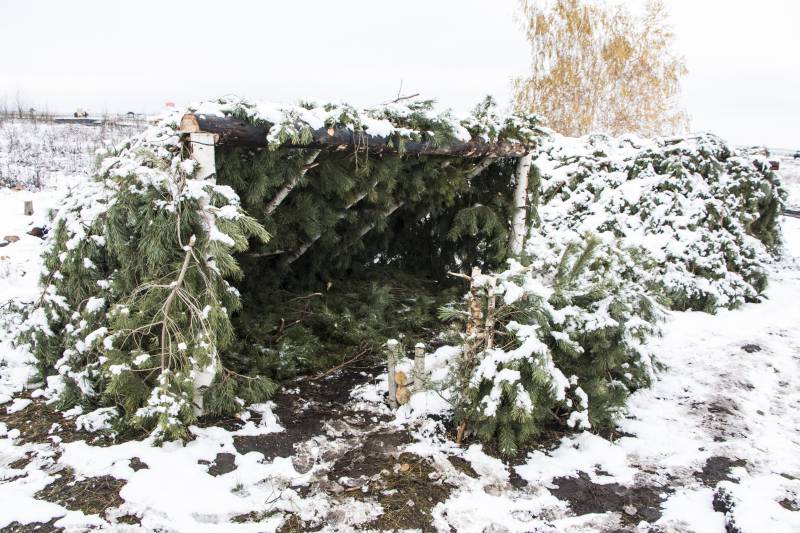 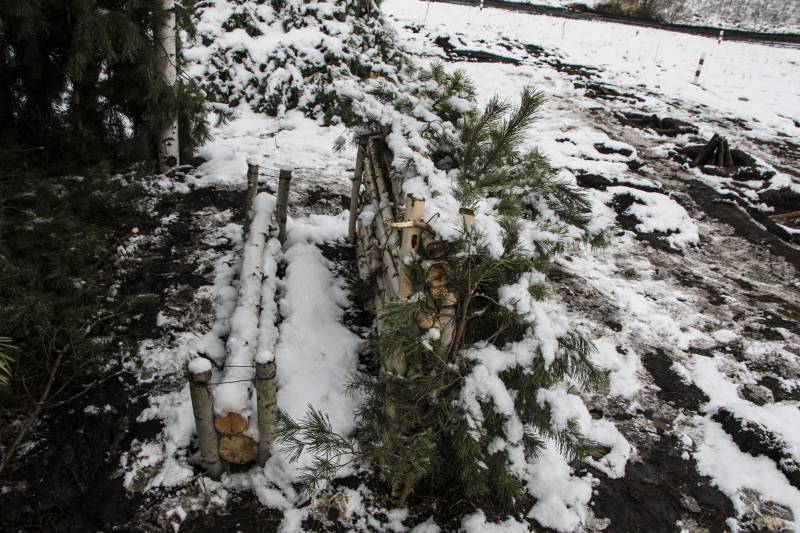 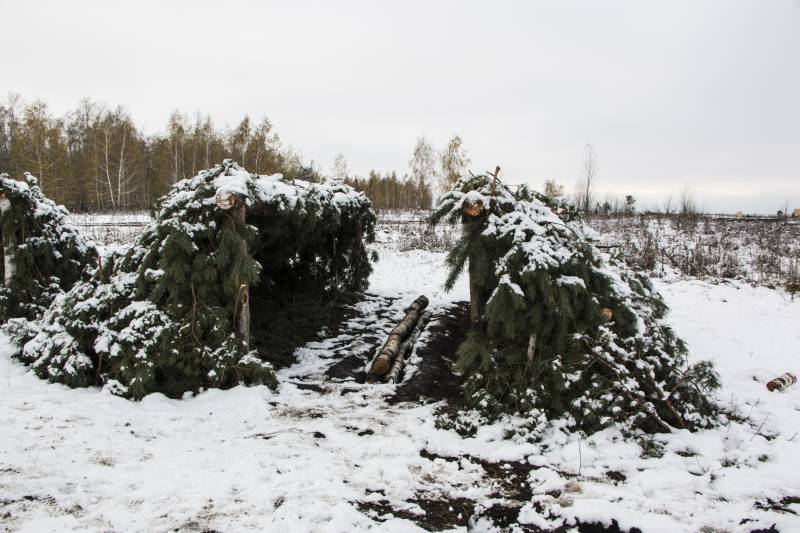 And then, the authorities, seeing the fruits of creativity, expressed their approval and ordered to make a study place out of this place. The place turned out, as for us. 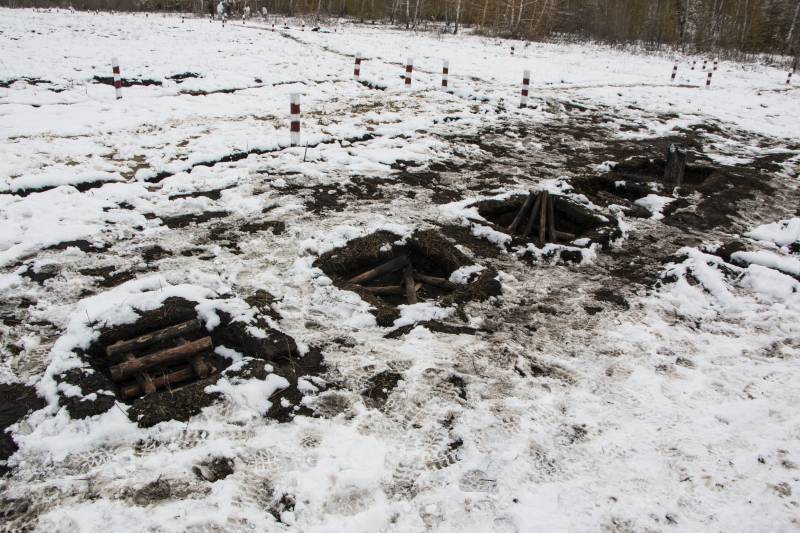 The scouts themselves had to do completely different things. And they showed them to us. The task was to organize a position for covert surveillance of the road. 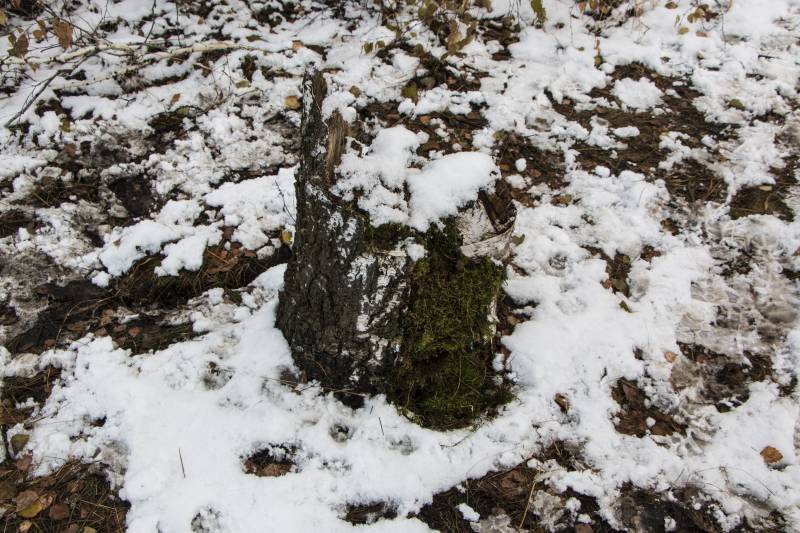 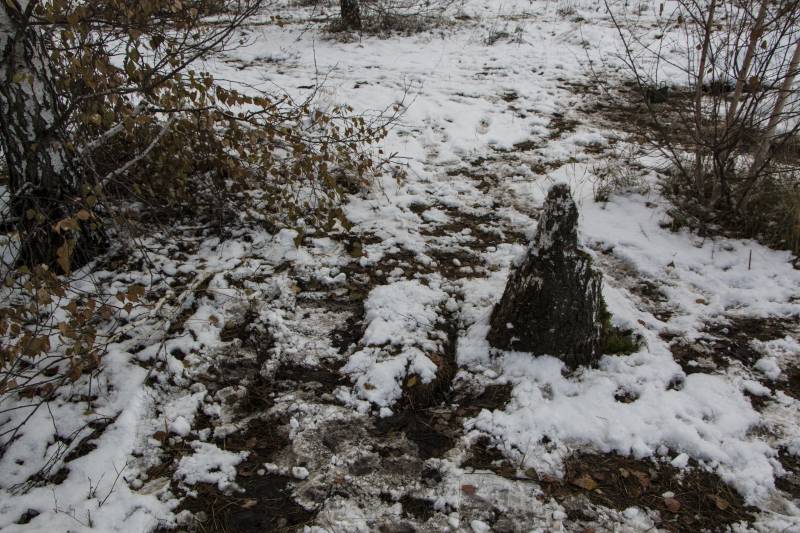 This is not an attempt to remove the winter landscape. This I rented the place of the first NP. Stump was not real, but quite man-made. 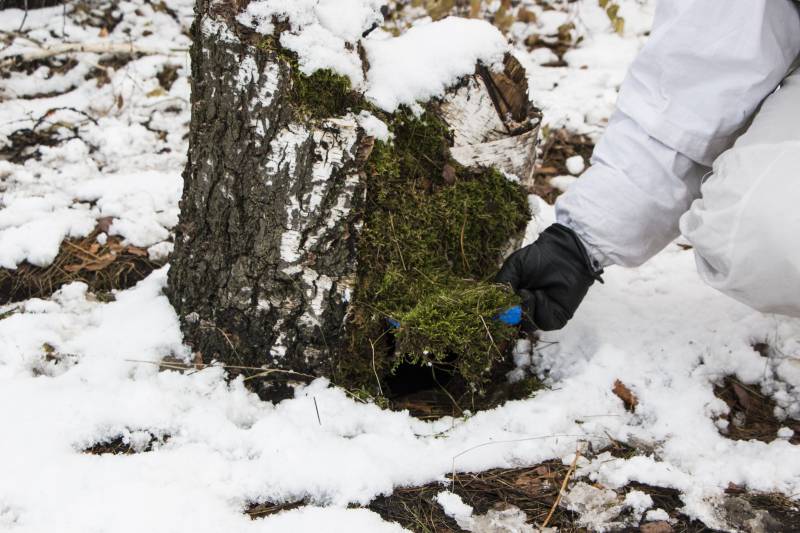 The fighters immediately explained that in a combat situation all the equipment would be made of branches, sticks, wire and other unobtrusive materials. And here the plastic basin, treated with a bayonet-knife, quite approached. On the question of where they took the civilian plastic basin, the guys honestly looking into the eyes, said they had bought. Mentally imagining where the nearest store is located, I mentally shuddered ... 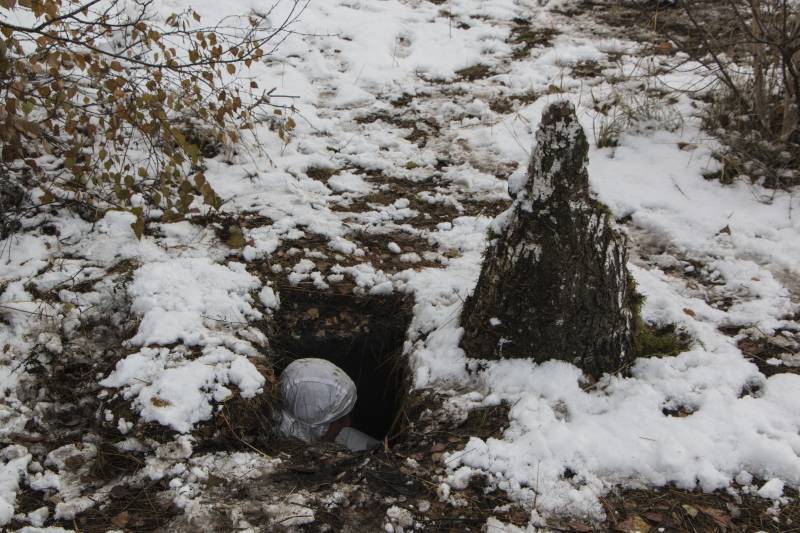 Under the "kick" was a room about a meter 2x1,5. Having estimated the dimensions, I almost agreed that one could sit there for more than one hour. Almost - this is because I really did not want to check for myself, and the fighters were quite ready to shove me there. But the weather and the prospect of returning about the same camouflage (very dirty) made me agree "on time". 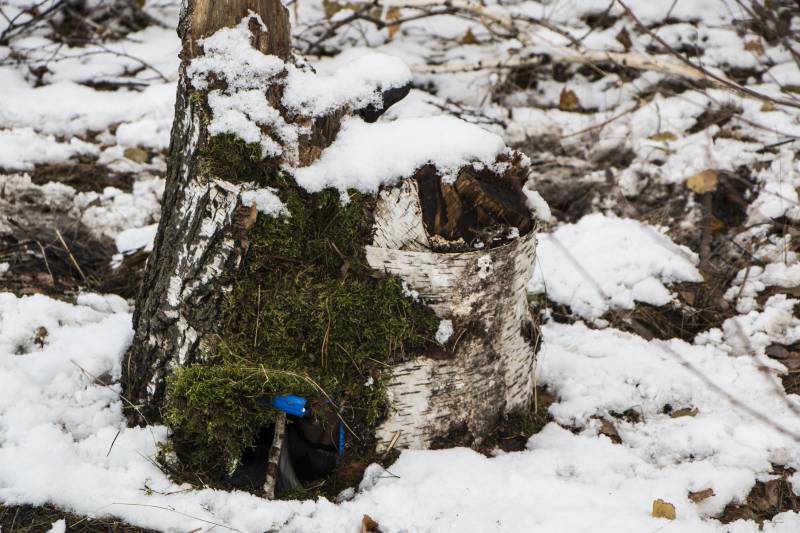 Then we went to the place of the second NP. 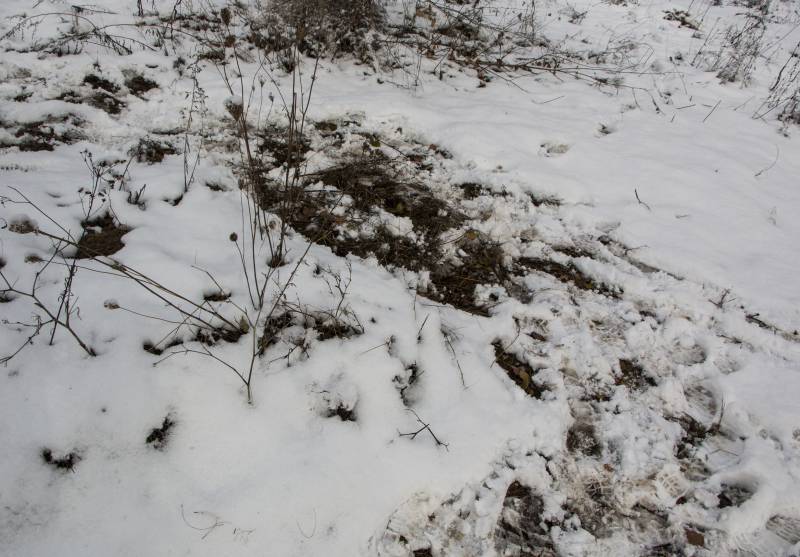 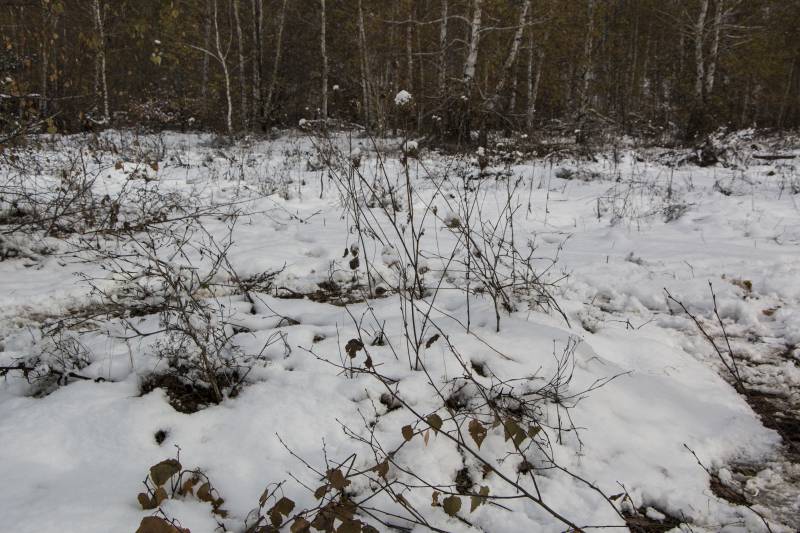 All the same dirty snowy landscape. It seems that the tracks should have shown where the caches were, but I saw him only when the group leader gave the command "Serge, stick out the pipe!" 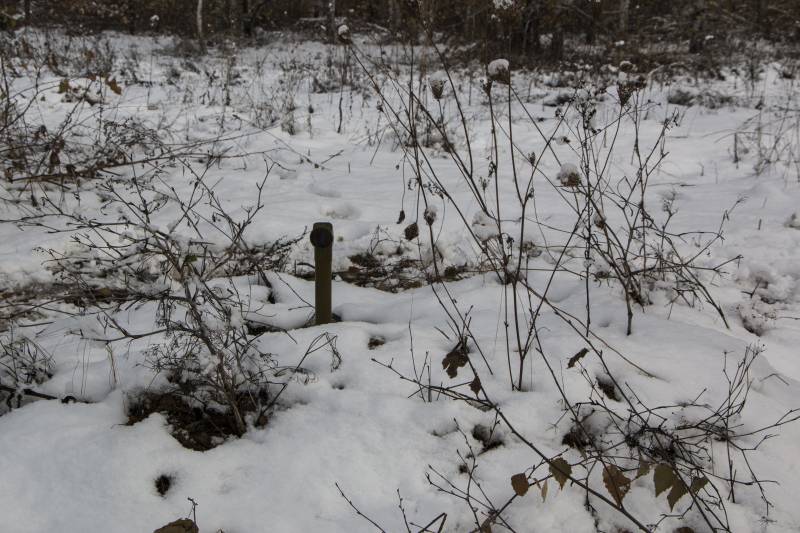 Seryoga stuck out. Burned the place. Under normal conditions, as commander Maxim explained, a plaster is wound on the pipe, a little bit seized with dirty hands, and that’s all, disguise is provided. 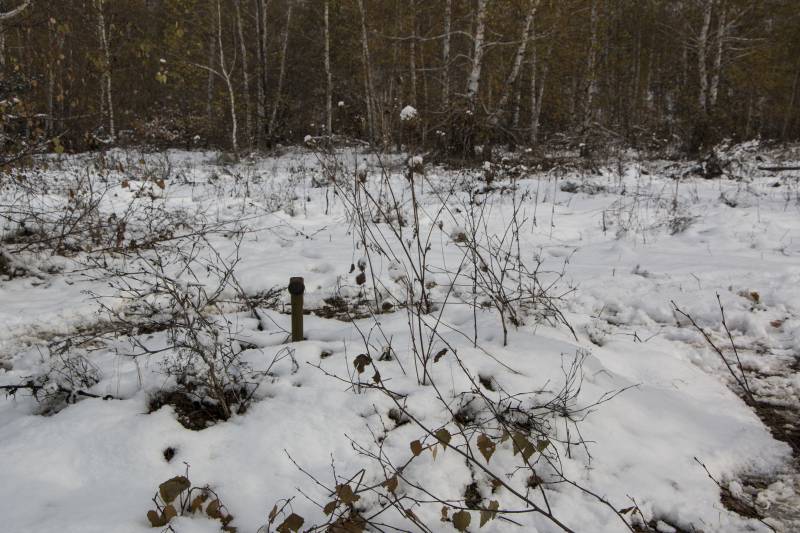 Although it (the pipe) and so not very noticeable.

The third NP. It has not yet been completed, the soldiers deployed a surveillance system. 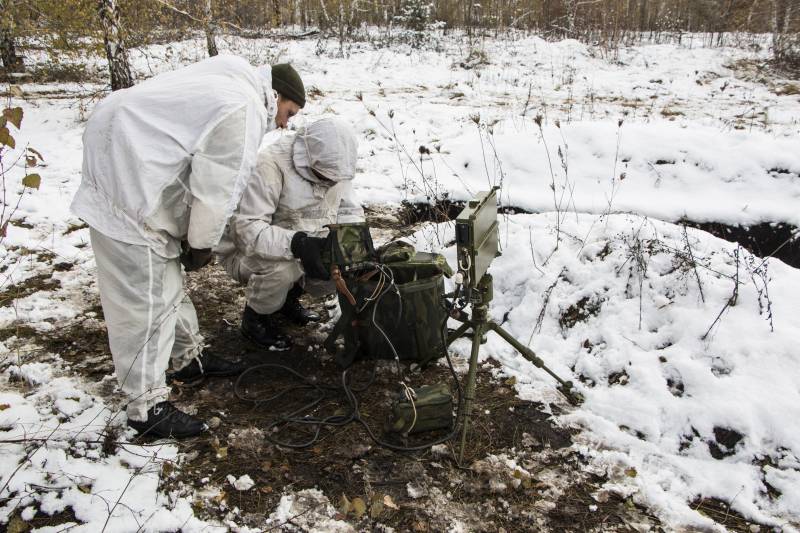 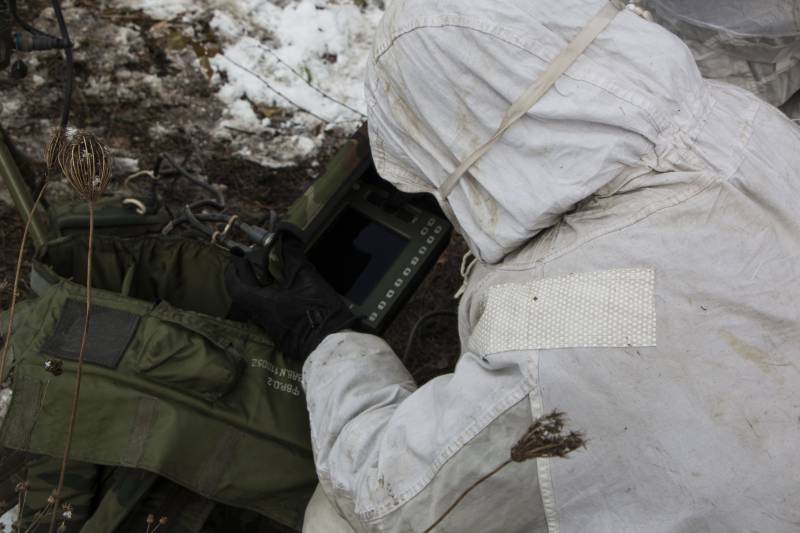 Unfortunately, we could not wait for the end, it was time to get down to what we actually came for. So having said goodbye and wished success to our “captives”, we left the reconnaissance group.

So, on behalf of the editorial staff and the authors of the Military Outlook, let me congratulate those who today wear cloves and those who continue to wear mice on their professional holiday. "Only stars are above us!" With the holiday "big-eyed" and "eagles"!

Ctrl Enter
Noticed a mistake Highlight text and press. Ctrl + Enter
We are
The Day of the troops of radiobiological and chemical protection is dedicated toThe guys from our yard. Photo report from the opening of a unique sports ground
69 comments
Information
Dear reader, to leave comments on the publication, you must to register.