About weapons for the PAK FA fighter

November 3 2016
89
Work on the project “Perspective Frontline Aviation Complex aviation»Approaching completion. Representatives of the military department and the aviation industry already name the time of the appearance of the first production equipment and the timing of the start of its development in the troops. In parallel with the refinement of the PAK FA / T-50 aircraft of domestic industry, it is necessary to create weapons for it. Unlike a carrier aircraft, promising aviation weapons may not attract much attention, but they are an essential component of ongoing combat aviation development programs.


According to various reports of recent years, the T-50 aircraft will have to carry and use a variety of weapons of many classes and types. The project of the fifth generation fighter provides for the possibility of attacking ground targets and combat enemy aircraft, for which controlled and unguided weapons must be used. According to reports, to date, some progress has been made in the field of weapons for the PAK FA. In the foreseeable future, the promising aircraft will be able to get a new weapon. 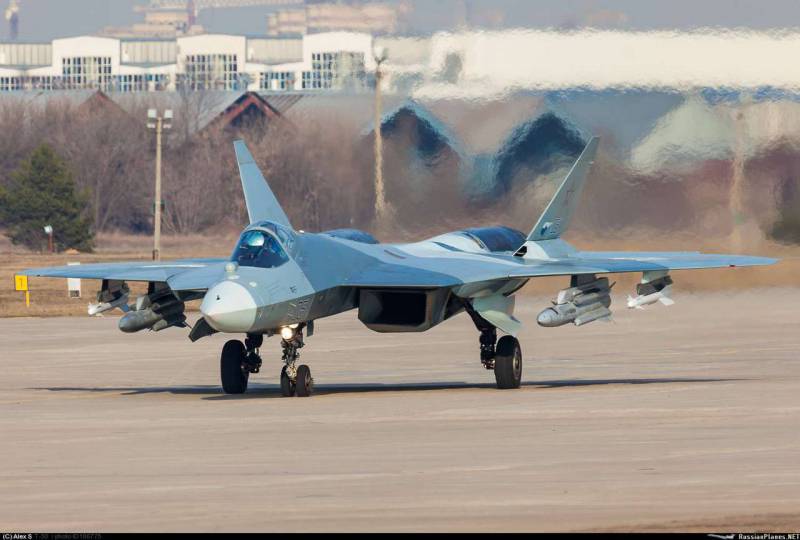 Perhaps the loudest in every sense news about arming the PAK FA fighter appeared in mid-September. As part of informing the public about the progress of ongoing work, the United Aircraft Corporation published a video recording of tests of the built-in cannon installation. Inspections of the layout of the nose of the aircraft with a gun installation NNPU-50 were carried out at the test site of the State government scientific test site of aviation systems in the city of Faustovo. The armament check was carried out by the most obvious method: target shooting.

According to UAC, the fifth-generation fighter receives a gun mount NNPU-50, the main element of which is the automatic gun 9-А1-4071К. This 30-mm gun is a further development of the existing GSH-30-1, but it has some differences that directly affect the main characteristics. It is reported that the product 9-A1-4071K is one of the lightest members of its class. The T-50 gun mount will consist of 150 projectiles.

In the officially published video, the process of mounting a gun on a model aircraft, preparing ammunition and shooting at a target were shown. Technical details of the project and accurate information about the new gun, for obvious reasons, were not reported. According to some data, the gun of the new model differs from the previous similar systems in increased operational characteristics and reduced weight. There are no significant differences in combat qualities. 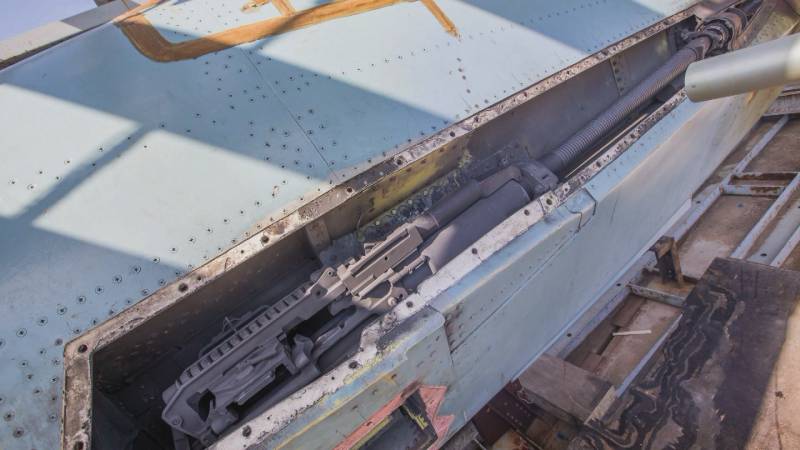 Nevertheless, the cannon armament of modern combat aircraft is only an auxiliary system. The main weapon of T-50 should be missiles and bombs of existing and new types. To transport them, the aircraft must receive a large number of suspension units, both on the outer surface of the fuselage and the wing, and in the internal cargo hold. According to various sources, the promising fighter will receive up to eight knots for hanging the weapon under the wing and fuselage, as well as the same number of internal knots. All this will allow using the capabilities of the aircraft with maximum efficiency, which, according to various estimates, will be able to take on board up to 10 tons of weapons.

The development of promising missile weapons for the PAK FA fighter began a long time ago. To date, such projects have led to some tests, but a significant number of new weapons are still not ready for the start of operation. The last time at the moment the subject of the development of missile weapons for the fifth-generation fighter aircraft was touched by officials in late October. On the last day of last month, the TASS news agency published an interview with Boris Obnosov, general director of the Tactical Missile Weapons Corporation (KTRV). The head of the corporation spoke about several ongoing projects, including work on missiles for the T-50.

B. Obnosov recalled that for the new aircraft will be created mainly new aviation means of destruction. Also, some additional technical solutions were needed, the need for which was related to the deployment of missiles in the internal cargo compartments. Nevertheless, the work continues and gives certain results. The first stage of the creation of new weapons is scheduled for completion next year. 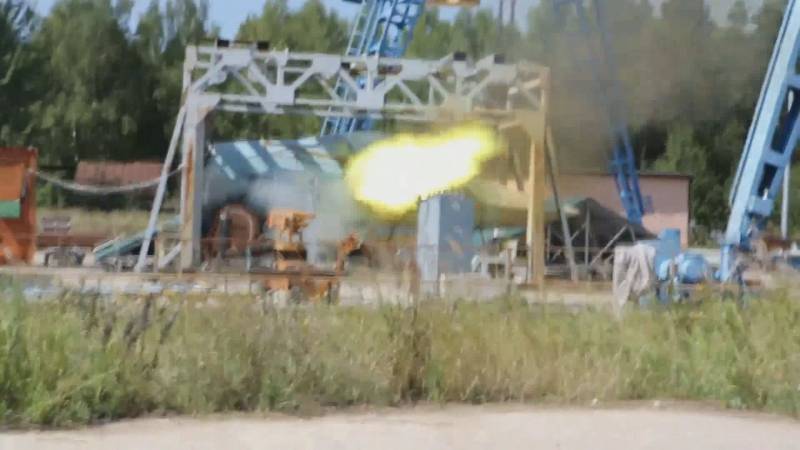 The CEO of KTRV spoke about some of the difficulties associated with the need for import substitution. In the production of some of the missiles created in the Vympel GosMKB, imported components were used. To solve this problem, an air-to-air RVV-MD product was developed, built only from domestic assemblies and assemblies. Due to problems in the international arena, the release of the X-35E anti-ship missile was in doubt. With the participation of the company "Saturn" was created X-35UE rocket with enhanced characteristics.

One of the main tasks in the development of weapons for the PAK FA was to ensure the use of missiles with internal fighter suspension. Such use of weapons has led to the need to develop foldable planes, as well as to change start-up procedures. This complicated the work on the creation of weapons, but the main tasks have already been solved, which led to real results.

Earlier, representatives of the defense industry mentioned that by the 2017, the promising fighter would have to receive six radically new missiles. Until the end of the decade, as many new projects will be completed. It was also alleged that, to date, four projects of missiles intended for use with an internal suspension have already been developed and are being tested. For example, in April of this year, photographs of one of the experienced T-50 with mock-up missile weapons under the wing appeared.

According to different sources, the main armament of the T-50 aircraft, designed to combat enemy aircraft, will be missiles RVV-BD, RVV-SD and RVV-MD, as well as some other products based on existing developments. Missiles suitable for transportation in the internal cargo box and on the external load should be used. There is reason to believe that air-to-air missiles will be transported on the internal compartments, the requirements for which make it possible to bring the dimensions to acceptable limits. It was mentioned that such weapons would be tested with the assistance of the PAK FA aircraft, while other samples could be tested with other carriers. 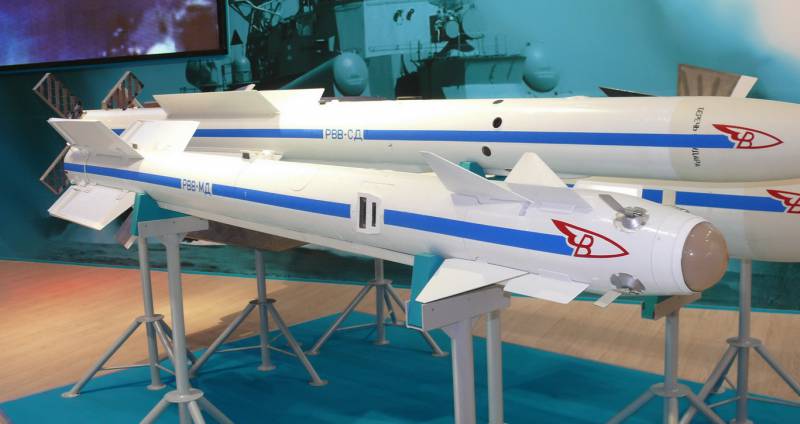 In accordance with the requirements of the project, the PAK FA fighter should be able to attack not only air, but also ground or surface targets. To this end, missile and bomb weapons of various types are introduced into the nomenclature of aircraft armaments. There is information about the possibility of using existing products of the “air surface” class of various modifications. Different sources mention the possibility of using X-31, X-35 and X-38 missiles of various modifications.

Especially for T-50, the X-58USHKE controlled missile was designed to destroy enemy radar stations. The result of a deep modernization of the existing product X-58 was the appearance of a rocket with a fuselage of a modified section and with updated on-board equipment. Such a rocket is intended to be transported in the fighter’s internal cargo compartments, due to which the project provides for obtaining target designation from the carrier, before going beyond its fuselage. The X-58USHKE rocket model was first presented to the general public last year at the MAKS-2015 exhibition.

Next year, the air-launched cruise missile BrahMos II will be released for testing. This weapon is created by the joint efforts of the Russian and Indian defense industries. It is expected that the rocket will develop hypersonic speed, providing for overcoming the enemy air defense assets. According to previously published data, the promising FGFA fighter, planned for development in the interests of the Indian Air Force, will be able to carry two BrahMos II missiles. Whether the Russian T-50 will carry such a weapon is not yet specified. Nevertheless, the emergence of such weapons could significantly increase the combat potential of the aircraft. 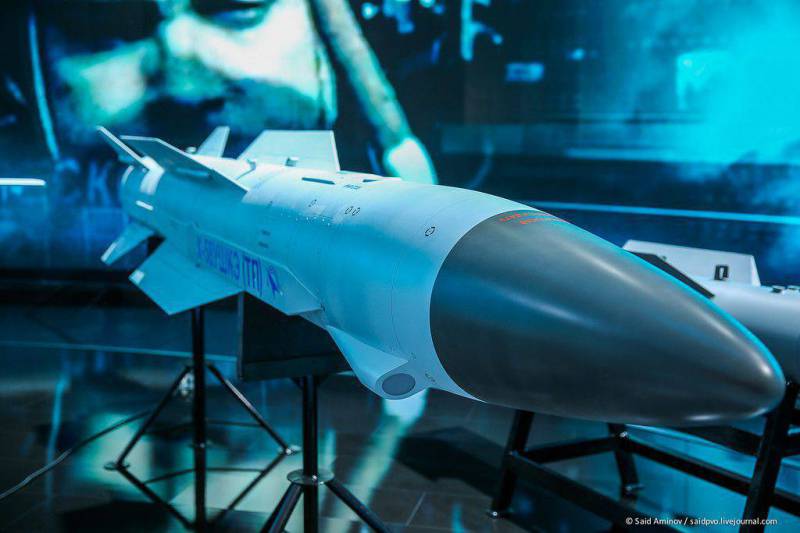 It was reported about the possibility of using a PAK FA fighter guided bombs of domestic production of caliber up to 500 kg. The dimensions of such products will make it possible to transport them both on the external hanger and on the internal nodes. Existing avionics will have to ensure the use of adjustable bombs of all existing types.

Apparently, the fifth generation fighter will retain the possibility of using unguided weapons. It will be possible to install free-falling bombs or blocks of unguided rockets on the external or internal suspension. A modern sighting and navigation system will provide an opportunity to obtain acceptable accuracy characteristics. The capabilities of the aircraft in theory will allow to carry and use the vast majority of unmanaged weapons in service. At the same time, the specifics of using the T-50 will not contribute to the frequent use of such weapons.

According to the official reports of the military department and defense industry, to date, within the framework of the project “Advanced Aviation Complex of Frontal Aviation”, several prototypes have been built and brought to the test. This technique has already been seen with mock-ups of aircraft weapons on the external sling. By appearance, the air-to-air missile RVV-MD and the air-to-surface X-31 were identified in the mock-ups. The continuation of the tests suggests that so far prototype aircraft have completed at least part of the inspection program with dummy and full armament suspension. 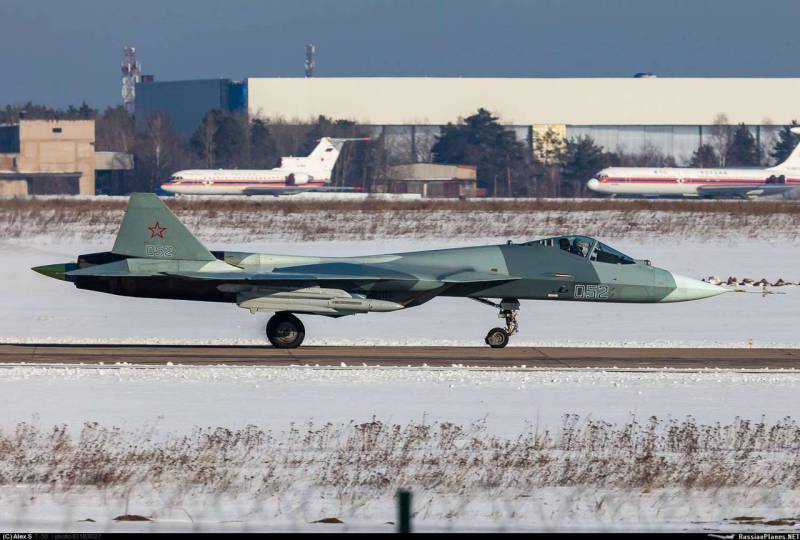 New models of guided missile weapons developed specifically for the T-50 fighter will have to appear soon. In total, by the end of the decade, it is planned to create more than a dozen missiles of various types and different purposes. In addition, the integration of existing weapons and the development of a promising automatic cannon should be completed soon. After completion of all such works, the PAK FA aircraft will be able to fully solve all the combat missions set.

In early July of this year, Deputy Defense Minister Yuri Borisov announced current plans for the completion of the PAK FA project. Deliveries of production aircraft of the new type are planned for 2018 year. A little earlier, unconfirmed data from unnamed sources appeared, according to which T-50 is already ready for mass production, and in the near future a contract for the supply of the first 12 machines should appear. According to several recent statements, by the end of the year, the Aerospace Forces will have to receive about fifty new aircraft.

Along with the completion of preparations for the full-scale production of new aircraft, the armament work for advanced fighters will have to come to an end. Especially for the new aircraft developed a large number of weapons for various purposes with different characteristics. Part of the weapons projects will be completed in the near future, which will be an important achievement in the framework of a larger and more important program.

Ctrl Enter
Noticed a mistake Highlight text and press. Ctrl + Enter
We are
Russia demonstrated the most promising weapons at INDO Defense-2014An-12 in Afghanistan
89 comments
Information
Dear reader, to leave comments on the publication, you must to register.