April 28 2010
3
Why did the program of completing parts and connections stall by contract soldiers? 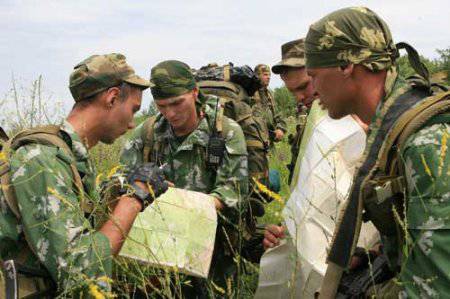 Back in the middle of 90, Russia, following the example of the advanced countries of the West, decided to acquire a professional army. The idea itself is good. This became especially clear during the first campaign in Chechnya, when at times the boys, untrained and unexperienced, who had just been disguised in military uniforms were sent to fight against hardened mercenaries and militants.

However, the Federal Target Program (FTP) “Transition to recruitment of military personnel under military service under a contract, a number of formations and military units” was approved by a resolution of the Government of the Russian Federation only on August 25 of the year 2003. What did she include? Among the main activities are the improvement of housing conditions for military servicemen, an increase in the level of combat training and logistics of formations and units, and an increase in the pay for people who have decided to devote a whole number of other social benefits to the army for at least several years of life.

The planned replacement of recruits by contract servicemen and an increase in their number eventually to 300 thousands was assumed. And with increasing dynamics in the future. In the course of 2004-2007, it was planned to convert dozens of formations and units of the Armed Forces of the Russian Federation, the Federal Border Service, and the Internal Troops into a contract.

But the program did not stand the test of "social programs". Even in the shortage of modern simulators and other teaching aids, it was still possible to train professionals at the testing grounds and in the classrooms. However, apparently, our commanders have forgotten that these are no longer boy soldiers, but adult men who wanted to start a family, get an apartment, and a decent salary.

And do you call a decent pay in 7-8 thousand rubles, which then put the first contract servicemen? Naturally, in addition to poorly educated people from low-income strata of the population, declassed elements, almost no one flattered these “cakes”. As a result, the army gradually filled with people who just did not see their future in it — temporary workers.

Of course, the Ministry of Defense took certain measures. The old barracks were reconstructed (converted), transformed into simplified military dormitories, new buildings were built in military camps, their social and engineering infrastructure was developed, differential allowances were paid for special conditions of combat training and sublevel housing. But contract military service did not become more attractive. Dorm - the same barracks. Money allowance is scanty. The working day is not regulated. As for the spa treatment, compensation for it, getting free higher education, it was extremely difficult to take full advantage of these benefits.

In a word, the idea of ​​a professional army turned out to be good, but, to put it mildly, not thought through to the end. The Armed Forces blinked at the mass termination of contracts by soldiers and sergeants, which, by the way, was especially characteristic of hot spots. According to the data of the Sociological Center of the Ministry of Defense of the Russian Federation, this step (early termination of the first contracts) was decided up to 13% of military personnel. Only one of the five extended the contract for a second term. Another 20% thought that they were disappointed by the military service, 15% were concerned about the exaggerated requirements of their commanders, 29% did not want to remain in the army due to poor organization of rest and leisure (lack of clubs, gyms, etc.).

But the majority explained the upcoming return to the “citizen” by the unresolved housing problem. And here it’s not even about individual apartments that the officers are provided with difficulty. Far from all military units still have at least a dormitory for small families. Many contractors live in converted barracks, their working day is not normalized. What, then, do they differ from "conscripts"? Nothing. And of the latter, often after half a year of service, other contract commanders did, exerting simply pressure. The main thing is the plan.

But it is precisely the contract soldiers who should be the basis of the units and compounds of constant readiness today. But it turns out that in the next two to three years, the troops may lose the professionals who signed the contract, for example, in 2006-2007 years or earlier. And then what will be the new look of the Armed Forces? This is a very difficult question to which there is no answer.

The Commander-in-Chief of the Ground Forces, Alexander Postnikov, assessed the situation this way: “Unfortunately, it must be admitted that the Federal Program for the Transfer of Constant Readiness Parts to Manning under the Contract has not fully achieved its goals. We were unable to make service under a contract so prestigious that the selection of the most worthy candidates, those who are consciously ready to connect their lives and the lives of their families with military service, is carried out. Alas, there were a lot of mistakes in this regard, and quite often it was necessary to retrofit these parts to the required level to the detriment of quality. ”

And the Chief of the Directorate of the Main Military Prosecutor’s Office, Major General of Justice Alexander Nikitin, explained the conflict to the military industrial complex: “The society pinned too high hopes that it had no real basis. Thank God, we have gained some experience, a vision of who the contractor is and what he should do. That is, it was just a restructuring on the go ... "

However, there are law enforcement agencies, for example, the Frontier Service of the Federal Security Service of Russia, who succeeded in everything and are not going to return to the call. At a recent meeting of the Minister of Defense with media representatives, the MIC correspondent asked: why did the federal target program stall in the army, but the border guards did not?

- Do you know how much an ordinary contractor gets there? - sounded a counter question. - Three times more than ours.

It really is. The money allowance of contract servicemen in the Border Guard Service is much higher. There are no problems with the set. Even a competition exists: for one place - up to 30 people! But the soldier does not matter what color his epaulets - green, red or blue. After all, they all take one oath, serve the same Motherland. Why is the Motherland so differently evaluates their military work? It is impossible to explain this with simple logic.

“In fact, I think this is a systemic problem,” Anatoly Serdyukov further developed his thought. - Everybody, when the Federal Target Program was developed, apparently liked it very much how it all worked out abroad. But it seems to me, they simply did not think it through. A contract soldier in the West has almost the same status as an officer. The service is regulated: from 9.00 to 18.00, after which he is a free person. We have everything turned upside down. Why is the officer in one status, and the contract in the other? In terms of money, there is also a huge gap: 7-8 thousand rubles - not the money.

The Minister of Defense cited the example of the Finns. They have if the soldier normally serves, then on Saturday and Sunday can go home in dismissal.

At the same time, the development of means, forms and methods of warfare makes new demands on the professional training of servicemen. The introduction of advanced information technologies in the basic units of combat control, the need for a substantial increase in the combat potential of both military units and each military person in the context of resource constraints raise the question of the professionalization of military service. Therefore, the contract army will not go anywhere. This is the requirement of time.

And this is well understood in the Ministry of Defense, the General Staff. That is why they do not cancel at all, but only push back the deadlines for the transfer of parts and connections to the recruitment of contractors. Their salary will increase from 2012. By 1 July 2010, the General Staff of the Armed Forces of the Russian Federation should develop a new Concept of the Armed Forces transfer to a contract basis. It will also be coordinated with the Border Guard Service of the Federal Security Service of Russia, the Ministry of Internal Affairs, and other departments.

What will it give? All complex specialties will become contractual. As the Minister of Defense said, “today we need to rethink everything. And now we are preparing such a program. We want, by reducing the number of contract soldiers, to raise their allowances to at least 80 percent of the lieutenant. ” That is, the contract will fall under the new system of material incentives, which is introduced in January 1 2012. In the meantime, their salary level is uncompetitive. For example, in Eastern Europe, it averages 700 dollars per month. Therefore, in order for the service to be attractive, it is necessary, we repeat, to increase the salaries of contract servicemen approximately three times. What now offers Anatoly Serdyukov.

It is only necessary to understand: even with such radical measures, the army, alas, will not immediately contract. Real professionals are nurtured and grown over the years. So, in the shortest possible time it will be necessary to solve the housing problems of all categories of servicemen, to guarantee them employment or retraining after they are transferred to the reserve, and pension benefits.

The main thing is that contractors must believe in the importance and necessity of military labor, in its social significance and state relevance. Only this will create conditions for the formation of professional Armed Forces in Russia, whose personnel will be ready to serve not only because of big money, but also because they are well aware: one of the most honorable cases in the world is to be a defender of the Motherland.