Riddles of the Great Mound (Part of 2)

November 2 2016
47
The first thing that caught the eye of archaeologists at the entrance to the front camera - it is plaster, which was in excellent condition. On the floor one could see a lot of wooden furniture remains. The front camera turned out to be incredibly large in size and, moreover, was literally strewn with various burial utensils. The attention of researchers attracted a hole that formed between two stelae of marble. As it turned out, between them lay a relief plate of gold. Near the entrance to the tomb was burned with gold, inside which archeologists managed to find arrows. Bronze knee pads with gold plated on them were found near the burn. On the floor were oil vessels made of alabaster. A delightful pectoral of gold was found near one of the walls, and two jellyfish, also made of gold, were found nearby. 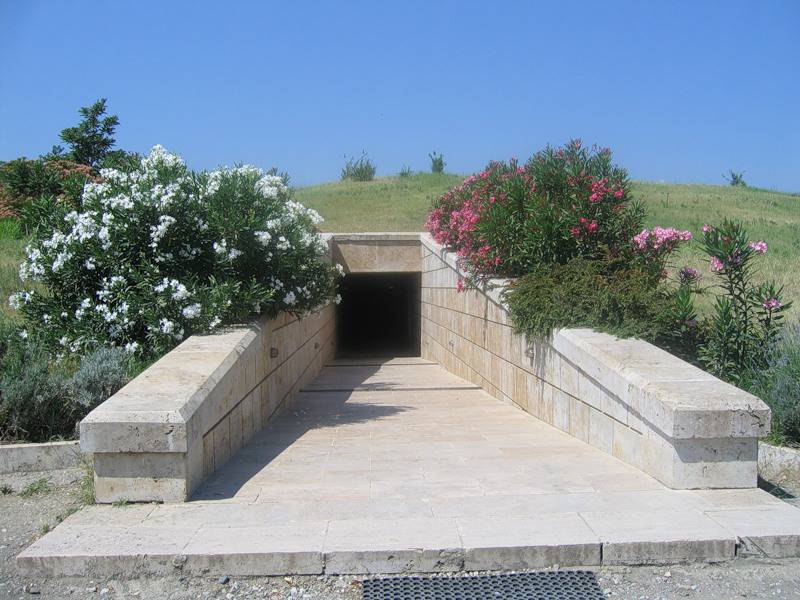 Entrance to the museum in Vergina.

The lining, made of gold, was in the form of a plate, which was divided into three parts. Two of these parts were decorated with beautiful reliefs of figures, and the third part, which was the largest in size, was decorated with an ornament that ended in the upper part with a figure of a warrior. All reliefs were united by a plot depicting warriors who donned armor and armed with swords. They lead a bloody battle with the enemies. At the same time, women and children are looking for a secluded place at the altars with images of gods. Logically, one may conclude that the capture of the city is depicted: the victors rush into the temples. Scientists immediately suggested that the fall of Troy is depicted - the most beloved story for all Greek masters. Later, having studied the relief in more detail, the researchers questioned this, since none of the characters could be compared with any hero. Most likely, this is the plot of some other battle, about which we do not know anything. 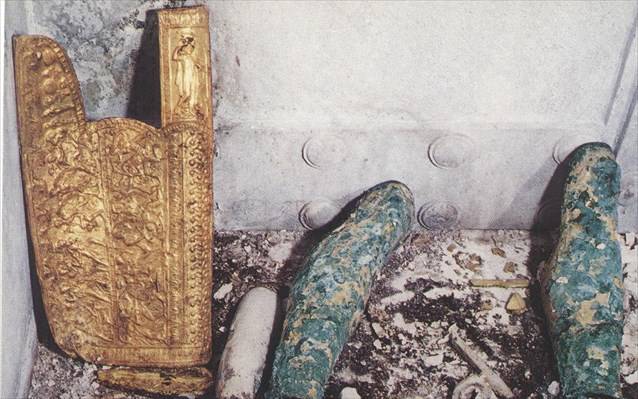 Burning and Leggings in the tomb.

It is not a secret for anybody that the leaders of the Scythians used such rich mountains; several pieces of such mountains were found in the southern part of Russia, in the places of Scythian settlements. Archaeologists found seven similar gorites in Karagodeashash - most likely, they were made on the same matrix. This was confirmed by the Soviet scientist A.P. Mantsevich. From this we can conclude that this burning was the military prey of the Macedonians after their battle with the Scythian wars. As you know, King Philip II in 339 BC. er He fought with the king Ateus and defeated him. Macedonian warriors have captured huge booty. Most likely, at this very moment it burns and got to them. 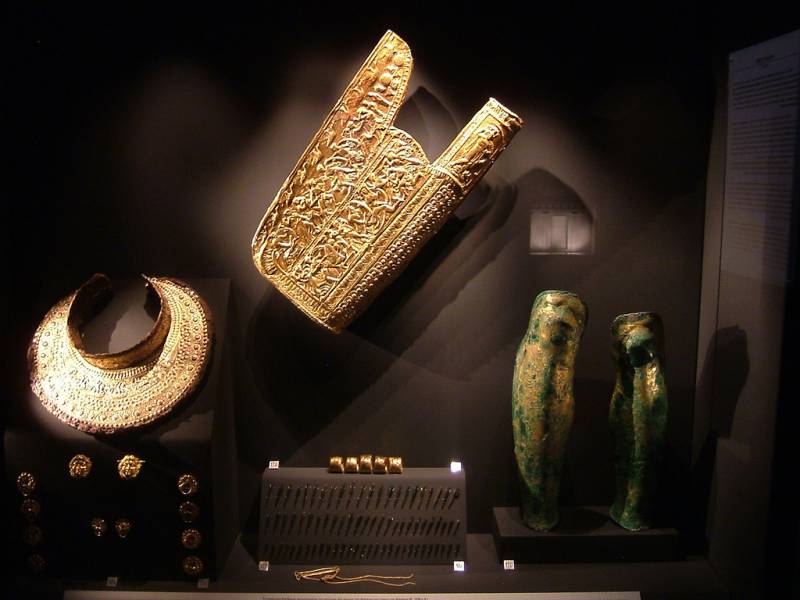 Lights in the museum. On the left is the golden pectoral.

After the sarcophagus in the anterior chamber was opened, a number of pleasant surprises awaited the researchers. Inside there was another urn, but this time it was smaller in size. The researchers immediately removed it and proceeded with the autopsy. Inside lay the bones that covered the brocade of purple-gold color. The threads of gold were in good condition, but the purple threatened to disappear. The researchers immediately took photos. Saving this cloth was a very difficult task. A group of restorers led by T. Margaritov managed to do this. But there was another find, the uniqueness of which is just incredible. In the urn, along with the remains, lay a female diadem of gold - one of the most unique jewelery that we inherited from antiquity. The main feature of this ornament was not its luxury, but the elegance with which this ornament was made. 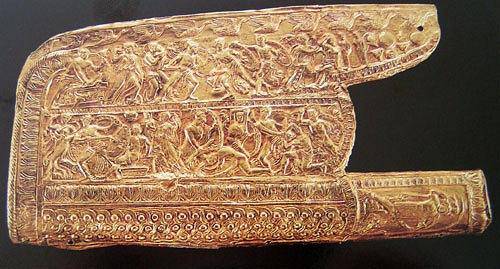 An image of battle scenes on fire.

Stems of gold adorned with many curls, buds, the legs of which are also made of gold. The whole composition was crowned with palmetki and the image of the bees above the flowers - all this together created this unique work of art. 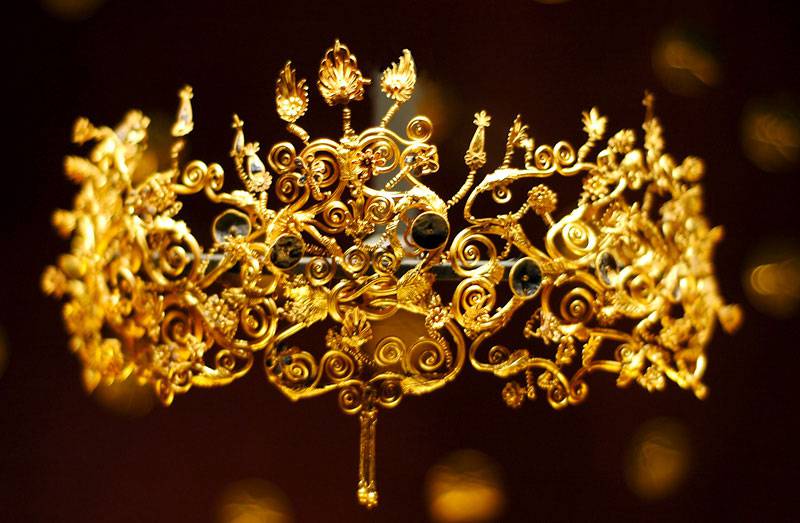 Having examined in detail all the finds, the scientists came to the conclusion that they had found a royal tomb. It was the largest of all the Macedonian tombs, inside it was painted by a famous artist, and the finds are of tremendous value, both literally and figuratively. The importance of the finds suggests that the tomb belongs to the head of the royal family. This is supported by the diadem of gold and silver found by scientists. The ends of this adornment were held together with a Heracles knot, which allowed the size of the volume to be adjusted. 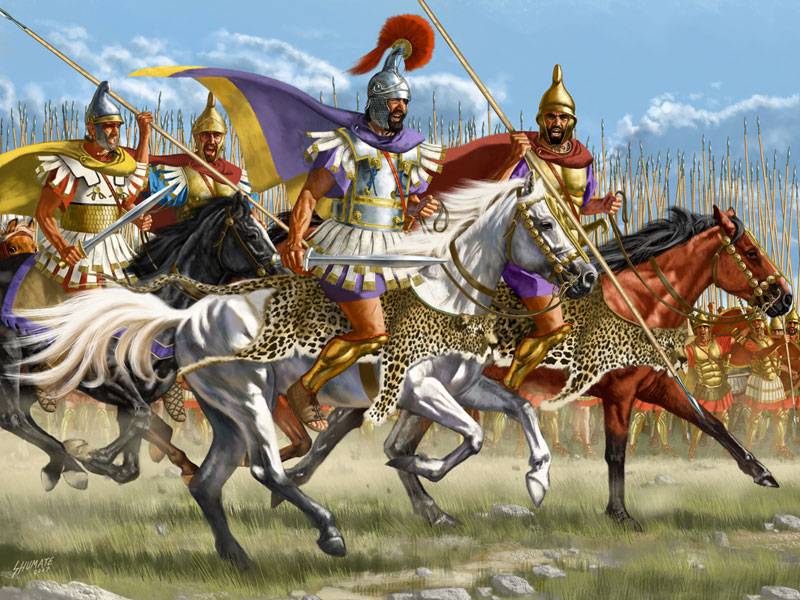 Perhaps King Philip looked like this in his unique iron armor.

Dating finds is not difficult. According to scientists, they relate to the third quarter of IV. BC e., and more precisely to the period between 350 and 325 BC. er
Provided that the dating is correct, one can conclude that this tomb belongs to Tsar Philip II - the father of the famous Alexander the Great. The works of anthropologists tell us that the remains belong to a man between the ages of 40 and 50 years, and, as we know, Philip was killed at the age of 46 years. A group of archaeologists from England conducted the restoration of the skull. Immediately there was a similarity with the image of the king. Also on the right temporal bone was found a depression, which was once a wound from an arrow. The remains of the second urn, as expected, judging by the diadem, turned out to be female. This is a young girl aged from 23 to 27 years, most likely, was one of Philip's wives, but which one is not yet known. Thus, the amazing treasures found by archaeologists in Vergina allowed to shed light not only on the Macedonian civilization, but also on the entire Hellenistic era of the 4th century BC. er 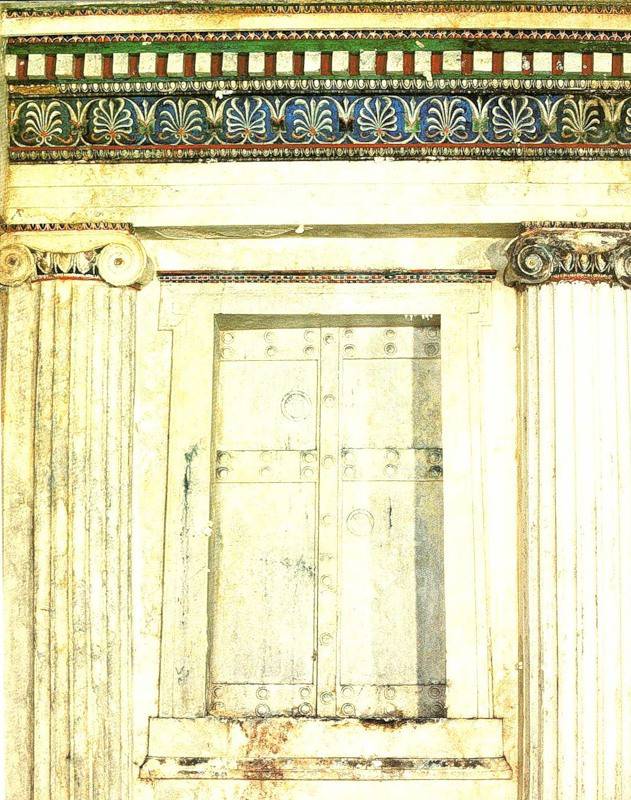 "The tomb of the prince"

However, this work is not over. Later, archaeologists managed to find another tomb (Tomb III), which was located northwest of the first tomb. Scientists immediately suggested that one of the members of the royal family rested in it. This tomb was small, but it also had two cameras. Unfortunately, the painting of the facade of the tomb was not preserved, since it was carried out not on plaster, as in other tombs, but on a panel of wood or leather. However, a small fresco was found in the front chamber. It depicted a double chariot. Of course, we cannot put this frieze on a par with that wonderful painting that was found in other tombs, but still it also belongs to the hand of a great master, who knew a lot about his work. 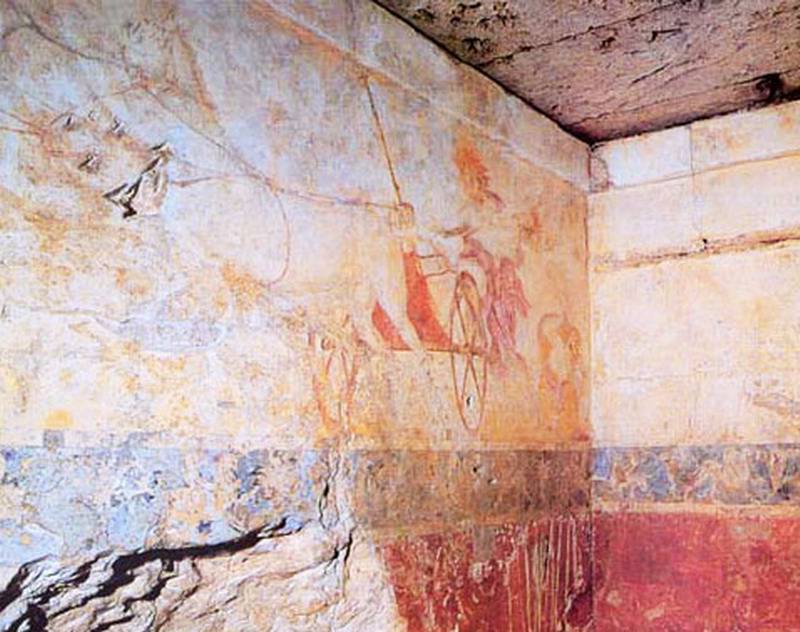 Painting with the image of the chariot.

Inside the chamber were many items. Many residues from organic materials were found on the floor. Cups made of silver were found in one of the corners of the chamber. Almost all of them were in excellent condition. In total, archaeologists have discovered 28 objects. After they were processed, it turned out that they were not of such high quality as the finds from Tomb II, but some of them were no less valuable. Some of these objects had a very unusual, one might even say original form, which was not typical for silverware. However, despite all this, researchers have discovered several masterpieces. For example, the pate with the image of the ram's head at the end of the handle. This is an excellent example of metalworking that existed in the 4th century BC. er 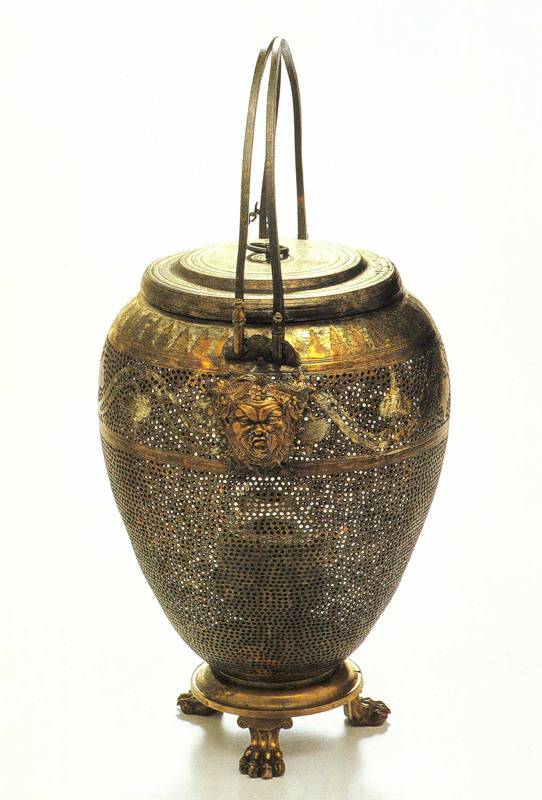 However, these are not the only subjects that deserve close attention to themselves. For example, a gilded sword tip was discovered. Also found were five gilded scrapers (shears) made of bronze. We also managed to find the greaves, which were gilded. In a terrible state, it was discovered some kind of clothing made of leather or woven fabric of gold. Human remains were found after cremation. They were surrounded by a crown made of gold, oak leaves and acorns. This beautiful crown was not as massive as the one that was found in the First Tomb, but despite this it can also be recognized as one of the most amazing crowns of gold, inherited from antiquity. 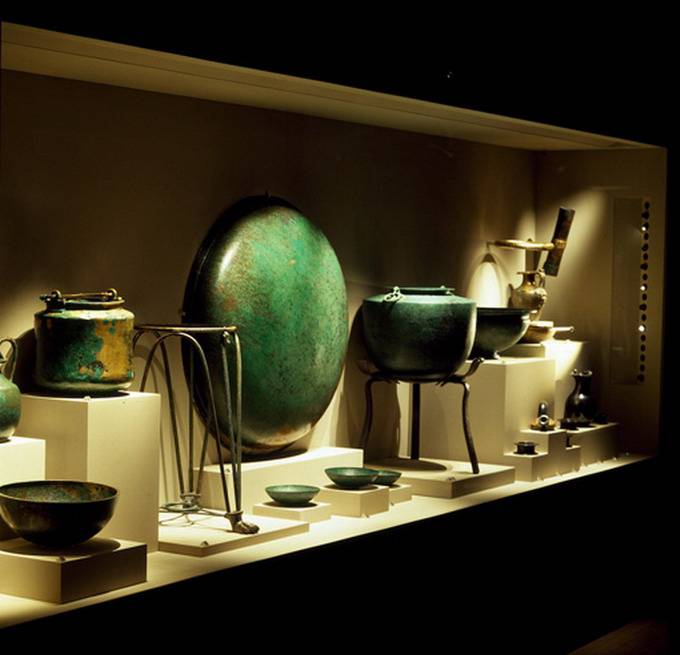 With almost one hundred percent probability we can assume that the tomb also housed a bed of wood, which also decorated ivory carvings. From the heap of fragments only two elements of the bed were sifted out. Most likely, it was the decoration of the legs of the bed. The painstaking work of G. Petkusis allowed scientists to restore some elements of relief and ornament. As it turned out, Pan was depicted on the relief, and a Dionysian couple was depicted on the left side. It can be seen that a mature man holds a torch in his hand, at the same time he rests on the shoulders of a young woman. 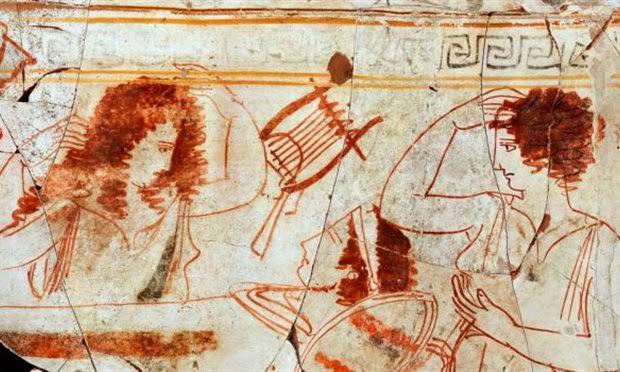 The painting of one of the tombs in Vergina: the funeral procession.

The careful work of anthropologists has established that a young man aged from 12 to 14 years rests in the tomb. Only the fact that this tomb was built specifically for the deceased young man, allows to classify it as a royal tombs. If anyone still had any doubts, the treasures found by archaeologists should completely dispel all fears: you should remember about the found tomb, which was made in all traditions of high art.

Some of the historians suggest that this tomb belongs to Alexander IV, the son of the famous Alexander the Great. As you know, he was declared king after the death of his father, and slain in 310 - 309 BC. er 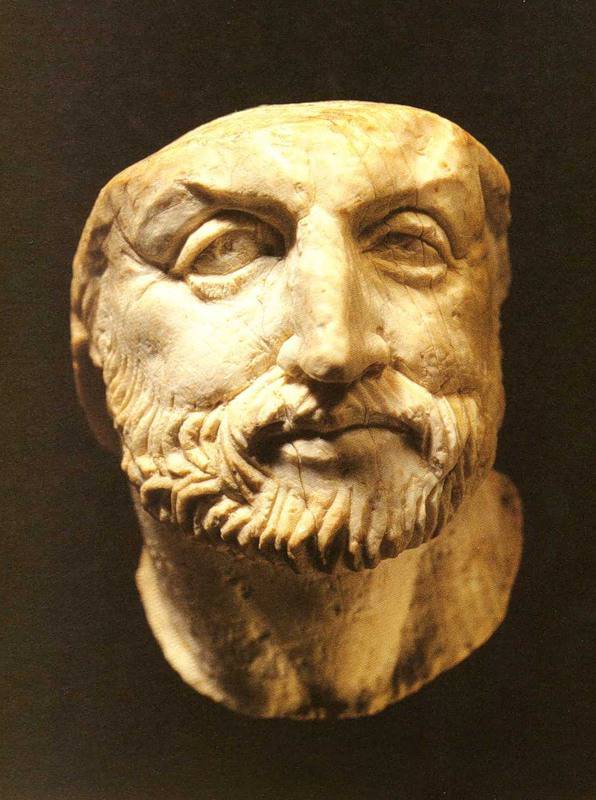 Despite all those amazing discoveries, the work in Vergina did not stop. In 1982, archaeologists managed to excavate the city theater, in which Philip II was killed, and his son was proclaimed king. In 1987, another startling discovery was made. Another tomb was found. After the autopsy inside, the scientists managed to detect a huge amount of burial utensils. As it turned out, this tomb belongs to the VI century BC. er From this we can conclude that this is the earliest tomb, which was discovered in the ancient Macedonian capital. Also, during excavations at depth, limestone blocks were discovered, which made up a large structure. As it turned out, it was the burial chamber. Unfortunately, the robbers have already been here. But despite this, the scientists were lucky to find a unique find in one of the chambers - it turned out to be a marble throne with an ornament made on it. He stood in the farthest corner of the tomb. On its back there was a relief with the image of plants and the image of Pluto and Persephone on the chariot. Next to the throne was a bench, which was designed specifically for the legs. Scientists suggest that this tomb belongs to a woman. Most likely, she also belonged to the royal family. After death, her body was also cremated. After that, the remains were placed in a casket. 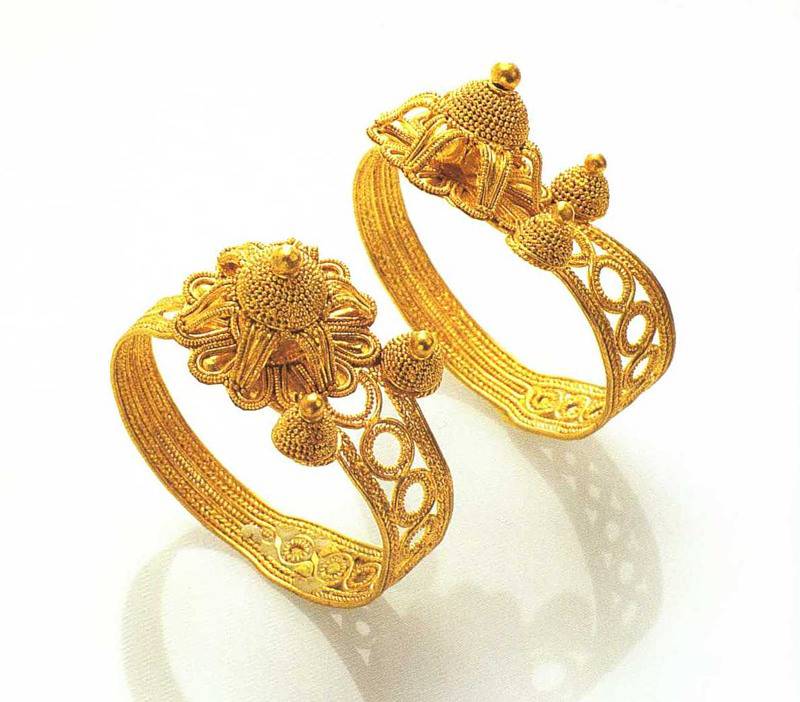 Gold earrings from burial in Vergina.

Today, all these artifacts found during excavations in Vergina are the exhibits of the museum in Vergina and the museum of archeology in Thessaloniki. Everyone who looks at them, of course, sees something of their own, but one thing is certain - a very high level of the then Greek culture, somewhat later, namely after the campaigns of Alexander the Great to the East, which became the basis for the culture of the Hellenistic era.

Ctrl Enter
Noticed oshЫbku Highlight text and press. Ctrl + Enter
We are
Riddles of the Great Mound (part of 1)Belarusian wonders. Is the museum easy?
47 comments
Information
Dear reader, to leave comments on the publication, you must to register.