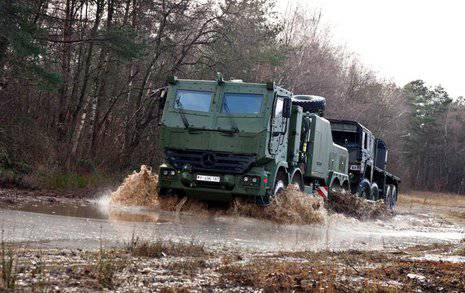 Mercedes-Benz delivered twelve heavy armored emergency and maintenance trucks (HABRV) to the Bundeswehr. These models are an important addition to the current fleet of the German armed forces. At the official ceremony held at the Logistics Management Center in Hesedorf, Mercedes-Benz Special Vehicles Sales and Marketing Manager Michael Dietz handed over the keys to Hans Thünemann, Project Manager for the Federal Office for Defense Technologies and Purchasing (BWB).

The commander of the 13 motorized infantry division, Brigadier General Klaus von Heimendahl, acted as the representative of the host country.

Pre-sales car preparation includes comprehensive checks at the Mercedes-Benz test site. This will allow trucks to be ready for immediate use on their 2012 arrival in Afghanistan in January.

The order for the production and supply of 12 HABRV entered Mercedes-Benz only in March 2011 of the year with the proviso that vehicles must be delivered between September and December of 2011. The fact that half a year has passed between signing a contract and delivering the first car demonstrates not only that Mercedes-Benz is ready for mass production, but also that it is already capable of supplying them to the troops.

The base for HABRV is the Actros 4151 AK 8x8. Mercedes-Benz manufactures these special vehicles using tried-and-tested parts and components for mass production as part of their own special production processes.

The heavily armored HABRV Bison, implemented on the basis of the Mercedes-Benz Actros 4151 AK 8x8, set new standards for vehicle logistics in terms of mobility, performance and protection.