Anglo-Transvaal war in the illustrations of the magazine "Niva"

October 27 2016
18
As a child, I was very lucky, as I now understand, in that I was born in a large old house built in 1882 of the year, and I had an enormous shed with him, and there was nothing in them. Old textbooks storiesTied in neat tutus, Ogonyok and Tekhnika-youthnoy 1943 magazines of the year, behind the boards in the shed, I found a bayonet for the Rifle 1874 Gra, my grandfather hung a Winchester mod under a rain coat. 1895. In a word, for a boy it was a treasure chest. There were some very ancient things: the Matador kerosene lamps with caps of the work in the style of Bernard Palissi, the “Bible in pictures of Gustav Dore” and a lot of files of the Niva magazine. I learned to draw from these publications, but ... not always successfully! He painted the battle of Dora, and the book once, and disappeared somewhere. “Where is the book?” And they answer me that they have handed it over to “Second-hand Bookseller”, because “as you draw from it, you will explain to the guys what they have painted, they will tell them at home, and ... people will say:“ The Bible is read in the Taratyn family! And we have a family of communists! ”Arguments my forces did not have, but then I could draw as much as I wanted from“ Niva ”. However, having become older, I also became stupid at the same time, and also all these thick volumes were handed over to the "Bookseller", although from childhood I was convinced that I would be a historian "like a mother." 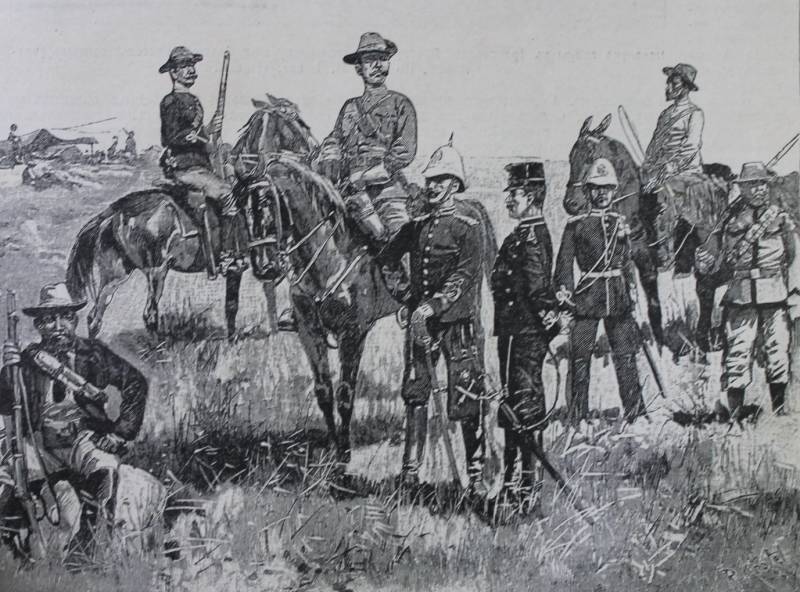 This is what the British soldiers of the territorial troops of South Africa looked like before the outbreak of the war. As you can see their uniforms largely corresponded to the theater. That is, this form was in Africa. But in 1899, many British soldiers looked like this.

I would not pass, I could now not go anywhere, but I would stay at home and without any problems I would take a photo from there and read the most interesting articles and reviews. By the way, it was in “Niva” in 1898 for the first time the novel “Resurrection” by L. Tolstoy, and then “The Island of Dr. Moreau” by G. Wells, and I read it all at a very early age. 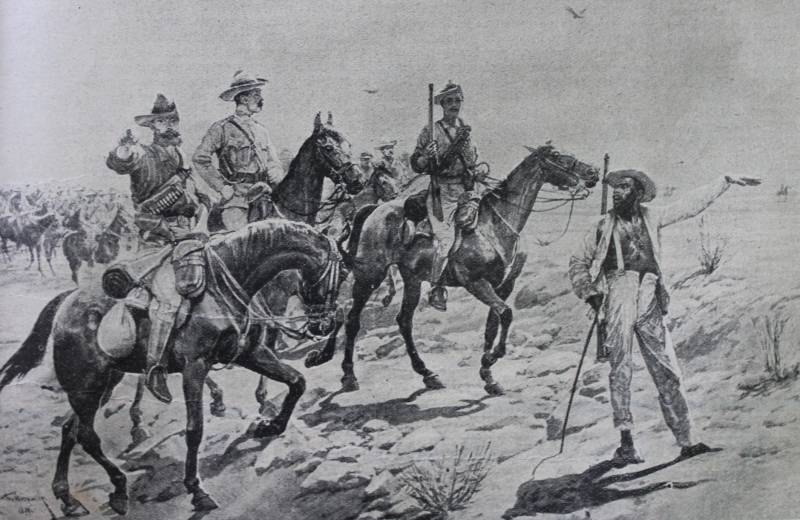 Surprisingly, during the war, the British actively used the local population of Blacks-Bechuans, Kaffirs and Zuluz against the Boers. But the Boers of the Negroes, for some reason, could not use or did not wish against the English. One of the explanations is this: the freedom-loving Boers were already painfully cruelly exploiting the local Aborigines, so much so that they perceived the British ... as a lesser evil!

My favorite topic in the 1899 magazine of the year was the Anglo-Boer War, the knowledge to which I learned from the novel by Louis Bussenard “Captain Sorvi-golov”. Oh-oh, for a while it was my favorite book, and here we also added live photos and graphics from there. True, the text did not write exactly what was in the novel, but in principle ... the information was not that different. But what were the illustrations there. And so many, many years have passed, I read “VO” and write it myself, and suddenly I meet here about the Anglo-Boer War. But one thing is to read the "rehash" of dozens of authors and quite another - fresh reports with "yatyami", "fit" and other delights of pre-revolutionary grammar. But the main thing, of course, is the image. Therefore, it turned out to be a free day, went to the local museum and filmed “pictures” in two years - 1899 and 1900. For 1901, the magazine is missing, and 1902 was a year “busy” by museum staff. But somehow the queue will come to him too. So, let's watch the Boer War in the way that readers of the all-Russian popular and accessible magazine Niva looked at it. By the way, it was then called “Anglo-Transvaal”, after the name of the Transvaal Republic. 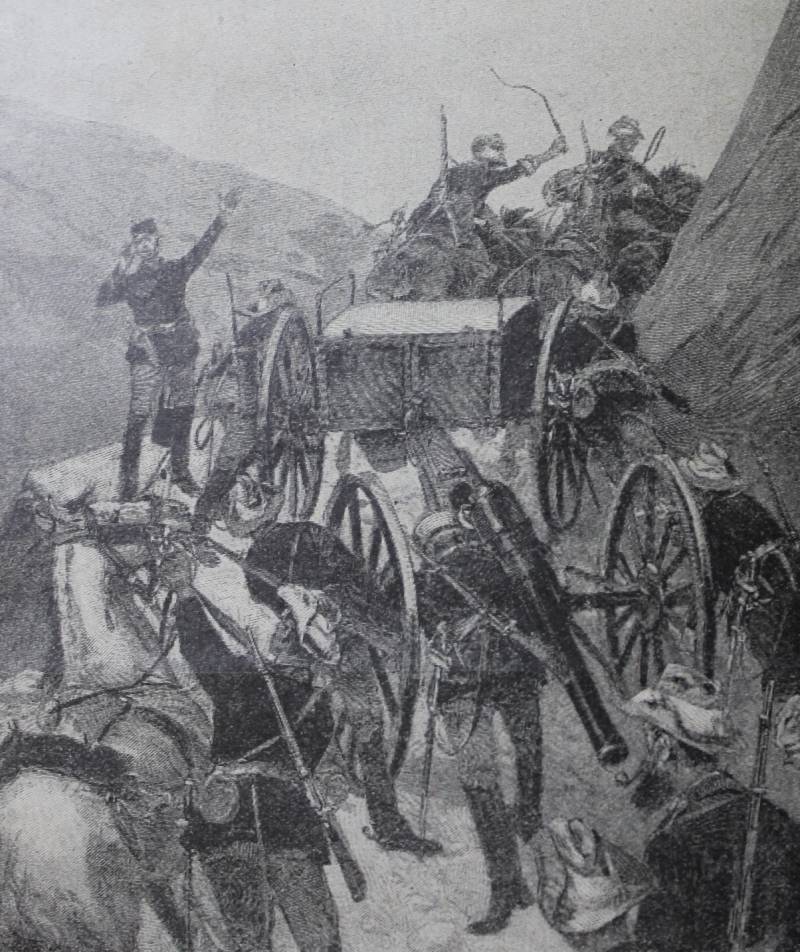 Transportation drills guns. Interestingly, the presence of gold mines and diamond mines allowed the drills to acquire first-class weapons at that time: Mauser rifles in Germany, Le Creusot guns in France, so it is not surprising that the British turned out to be very difficult. 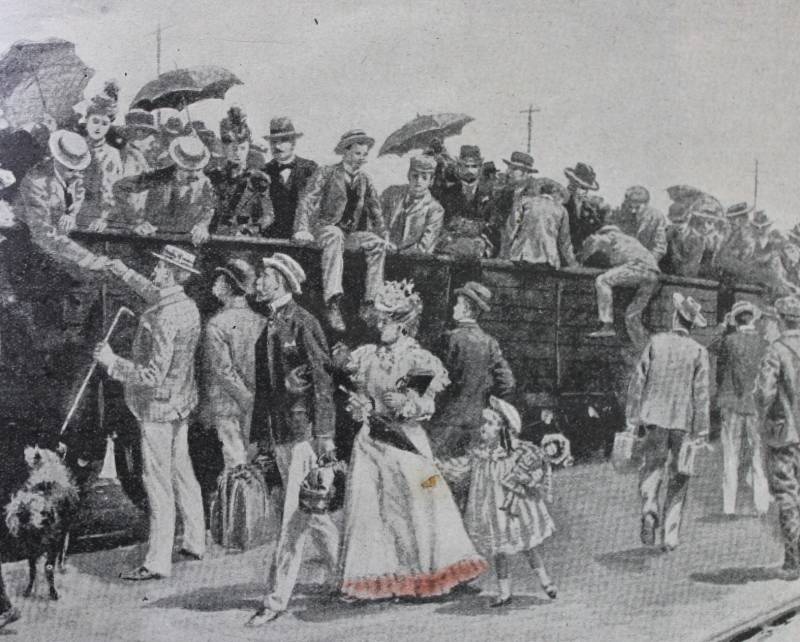 Check out the British from Johannesburg. With the beginning of the war, the Boers besieged a number of English cities. Therefore, from the Cape colony began the general flight of the British. 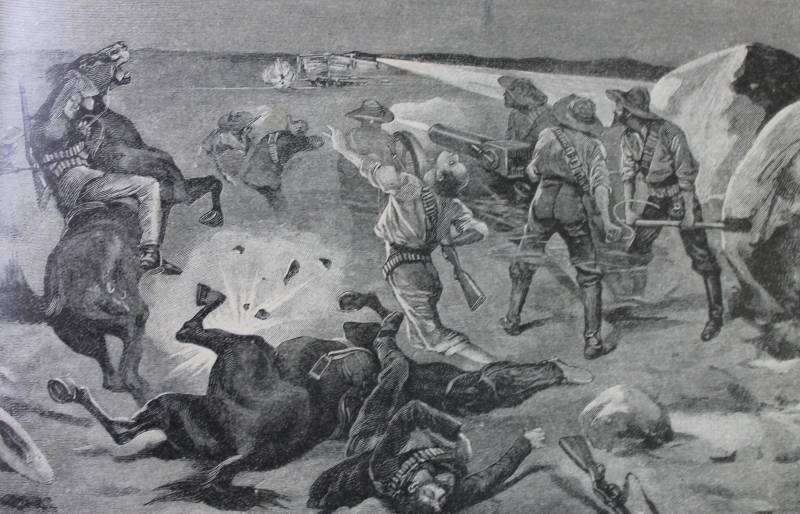 “Fight of the Boers with the British Train”. The British "entered the battle" into the battle at the very beginning of the war. 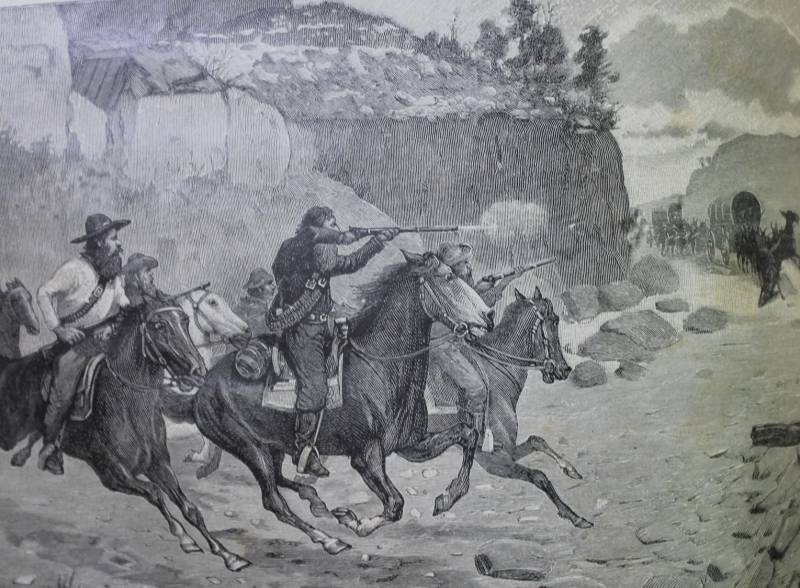 "The attack of the Boers on the English convoy." I couldn’t draw horses in my childhood and redrawn this picture many times, replacing horsemen with Indians and cowboys - all depending on what movie was in the theaters. "Sons of the Big Bear" - and these were Indians. "The faithful hand is a friend of the Indians" - cowboys bandits. 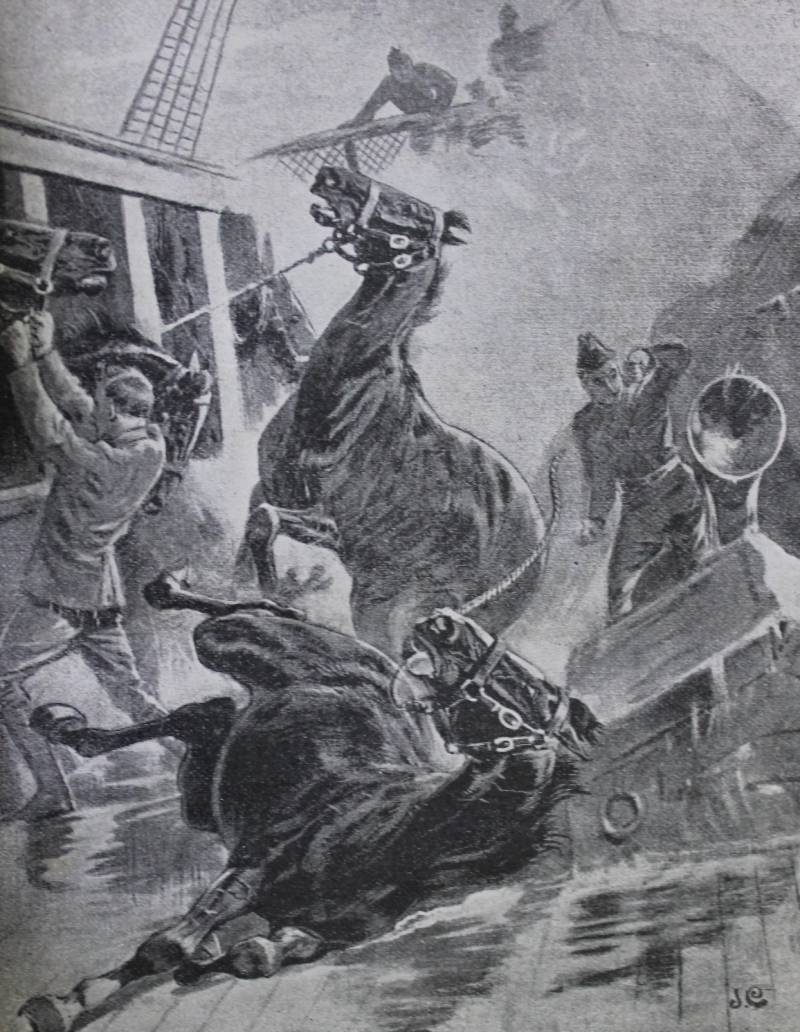 "Transportation of horses by sea from the metropolis to Africa." Horses are very sorry, is not it? 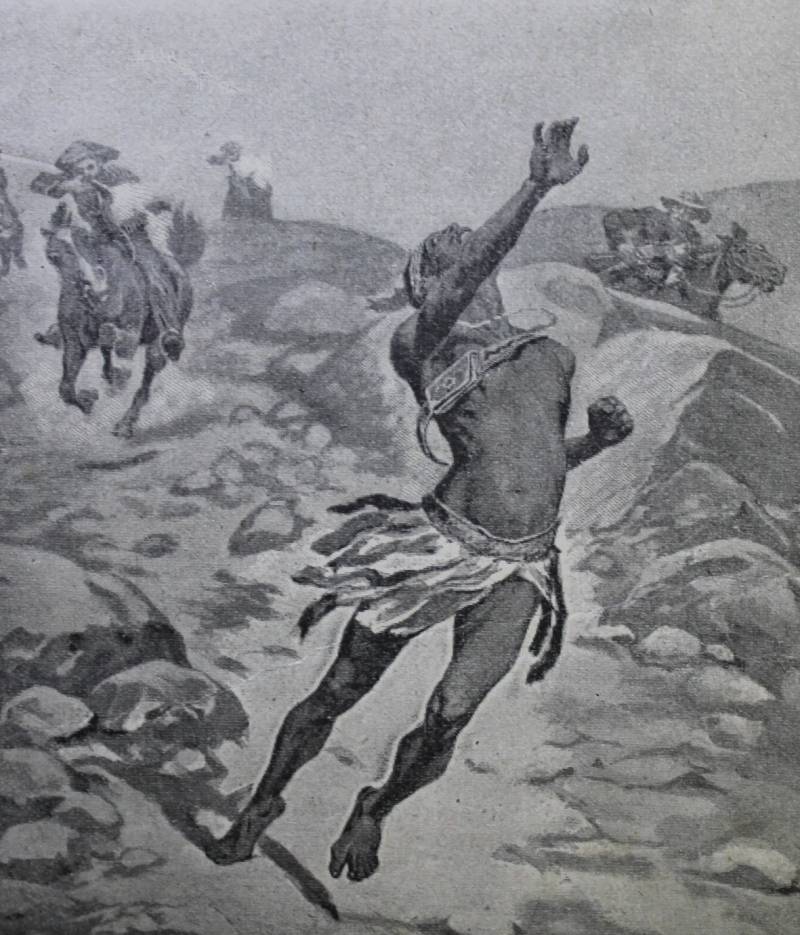 "Killed a nigger, nigger killed, killed a Negro ..." However, in the signature of another magazine - "Boer patrol kills the messenger Kafra in the service of the English army." Why not the other way around? 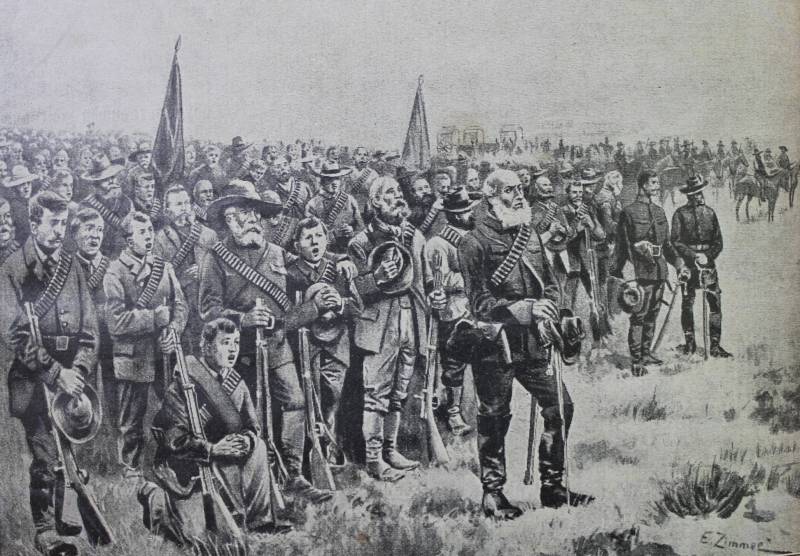 "The prayers of the Boers before the battle." Fig. E. Zimmer. It should be noted here that the photos at that time were printed with great difficulty in the magazine. They were retouched several times. Therefore, sometimes it was easier to print a drawing made as a photo. The piety of the Boers was also emphasized by Louis Bussenar. 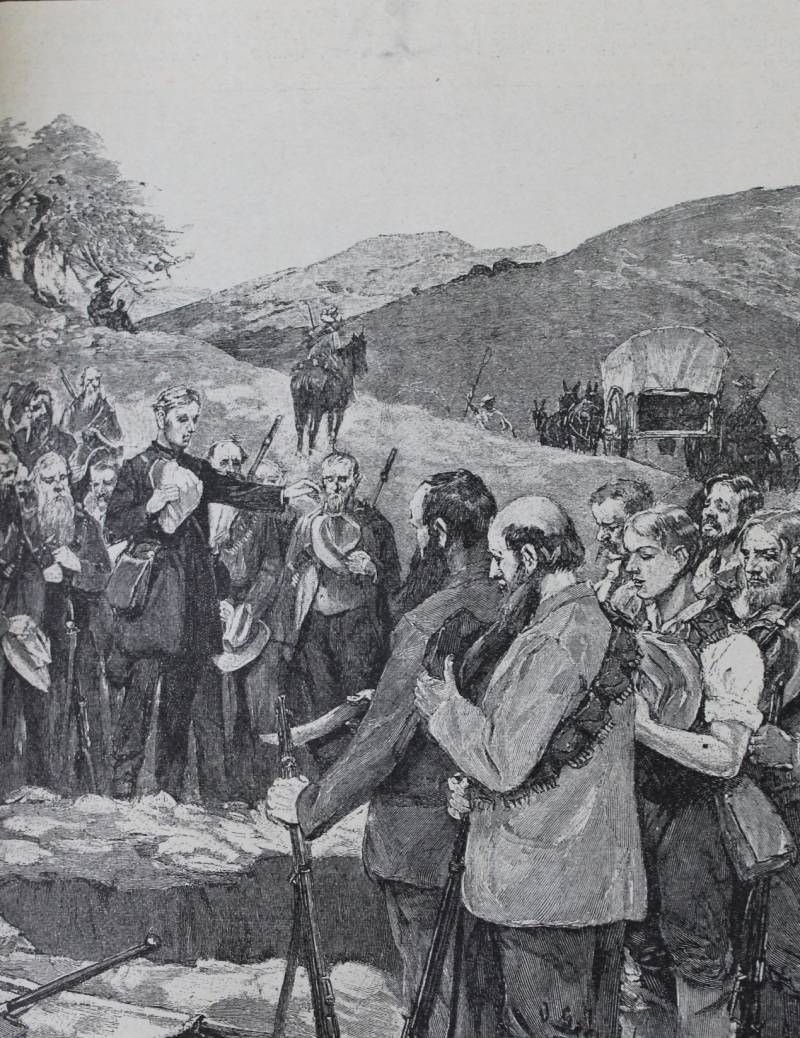 "Boers bury the dead British." Very good photo or picture from the point of view of the PR. That, they say, what they are, these boers, are good. And indeed, many people felt sympathy for them in Russia. 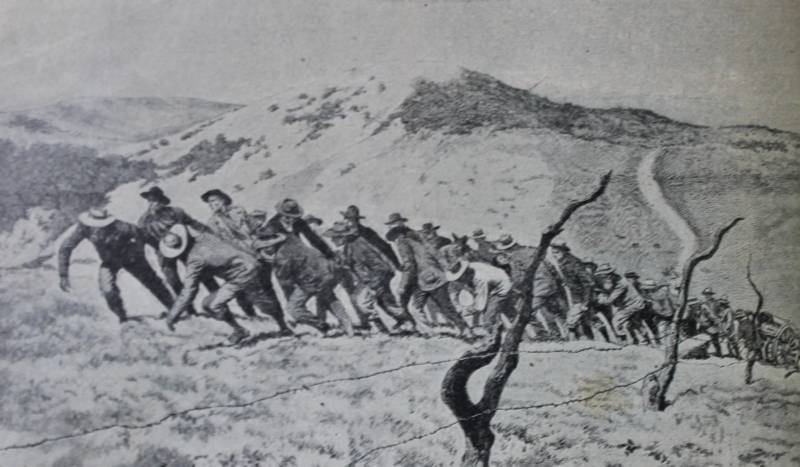 Boers dragging the Long Tom cannon up the hill. Again, Bussenar has about this gun. And what was she like? The 155-mm cannon of the company Le-Creusot, with its high power, is something like the Russian 152-mm cannon 1877 of the year, but even more powerful. So is it any wonder that the British wanted to destroy this instrument with all their might? 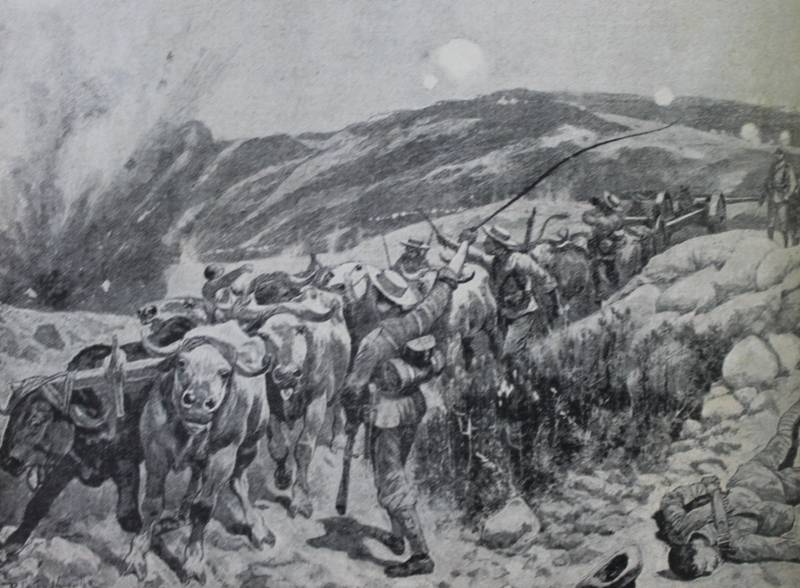 “Transportation of guns by bulls. According to fig. from nature. Interestingly, in Africa, our journalists worked and ... drew from life, and messages were sent from Natal by telegraph. And no one bothered them! 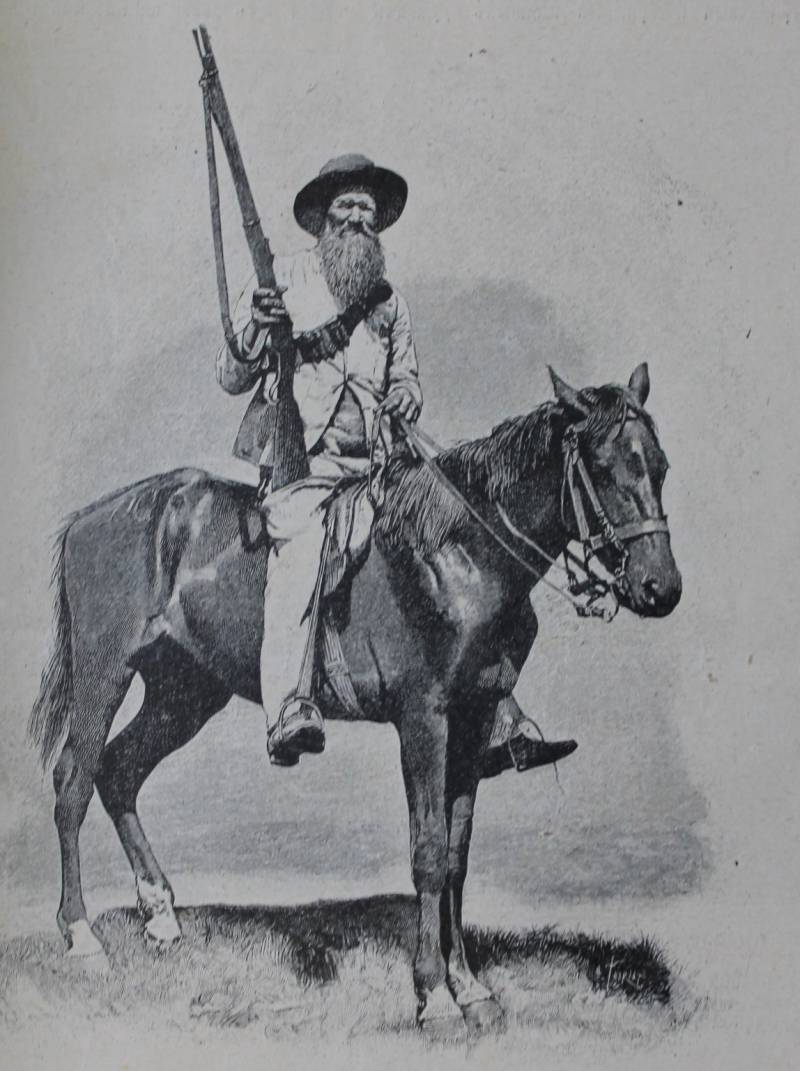 "Bur on horseback fully armed." Another my favorite drawing from Niva. And by whom only he had not visited me - an Indian, and a knight, and a musketeer. But note that in his hands is not a “Mauser”, but the English “Martini-Henry” rifle, rather old, single-shot, and under the lead bullet of the Boxer cartridge in paper wrapper. 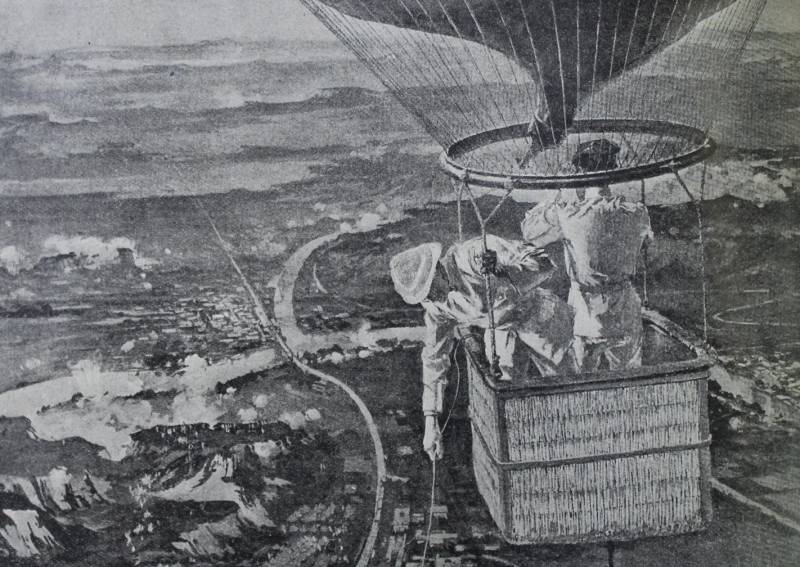 "Reconnaissance of the British in the area of ​​the river Modder." But about this Bussenar did not write that the British used the latest advances in technology and, for example, corrected the fire of their guns by telegraph from a balloon. 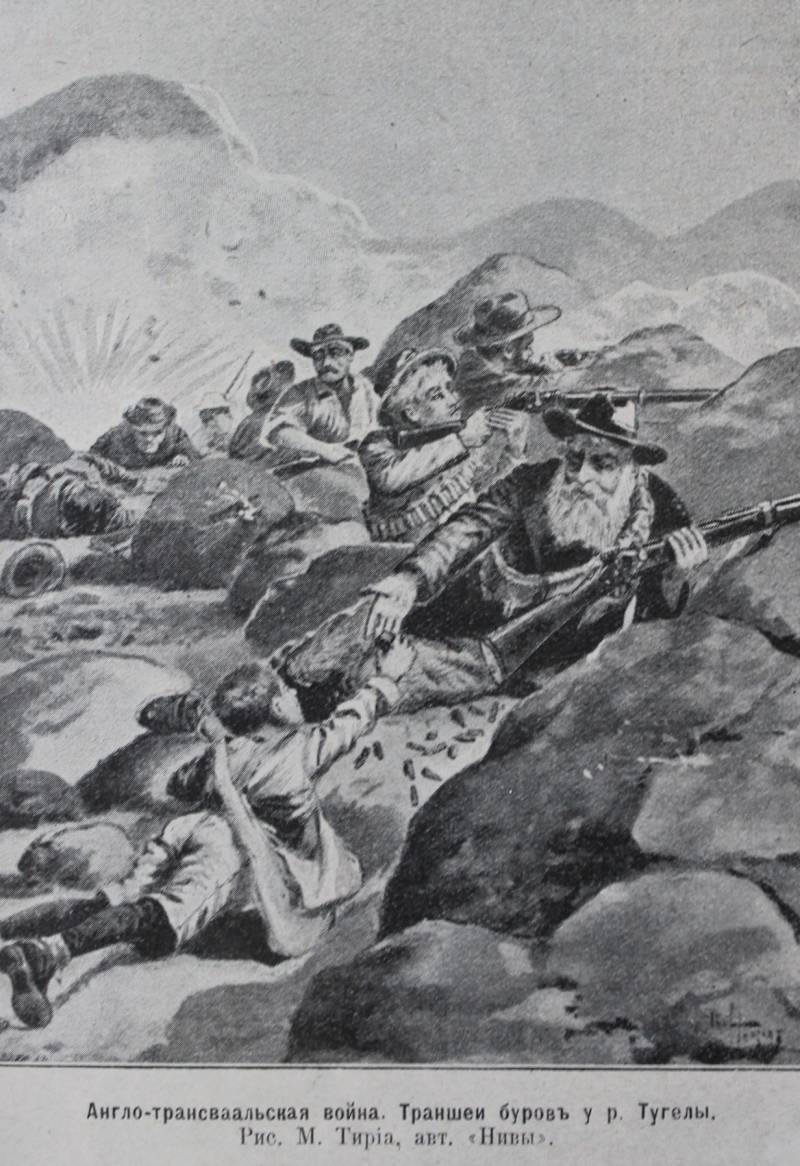 This “picture” managed to keep the original signature, but in this case the content itself is more important. Children bring ammo to borax! For that time, it was just an incredible level of heroism. 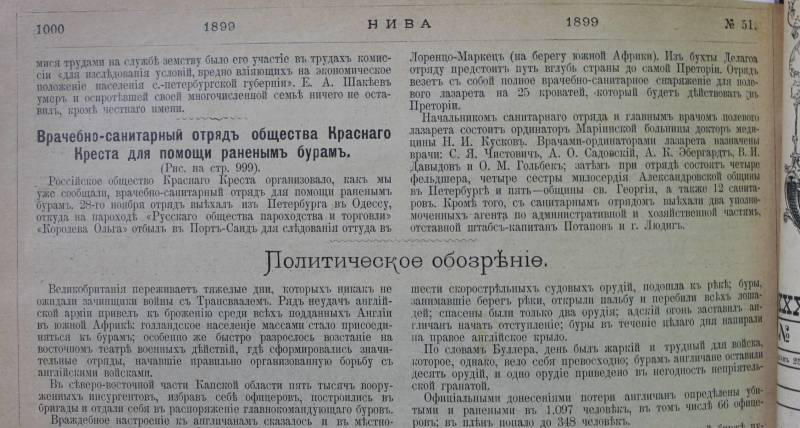 And here it is written, about how our volunteers formed the Red Cross Hospital and together with the nurses went to Africa. No, after all, our women are the true heroines. Go to hell knows where to look after the devil knows who and ... why by and large, in a strange feast to take a hangover? But ... let's go! They considered it their duty! “Your lot is a white burden, but this is not a throne, but work. Oiled clothes and pain and itching! " 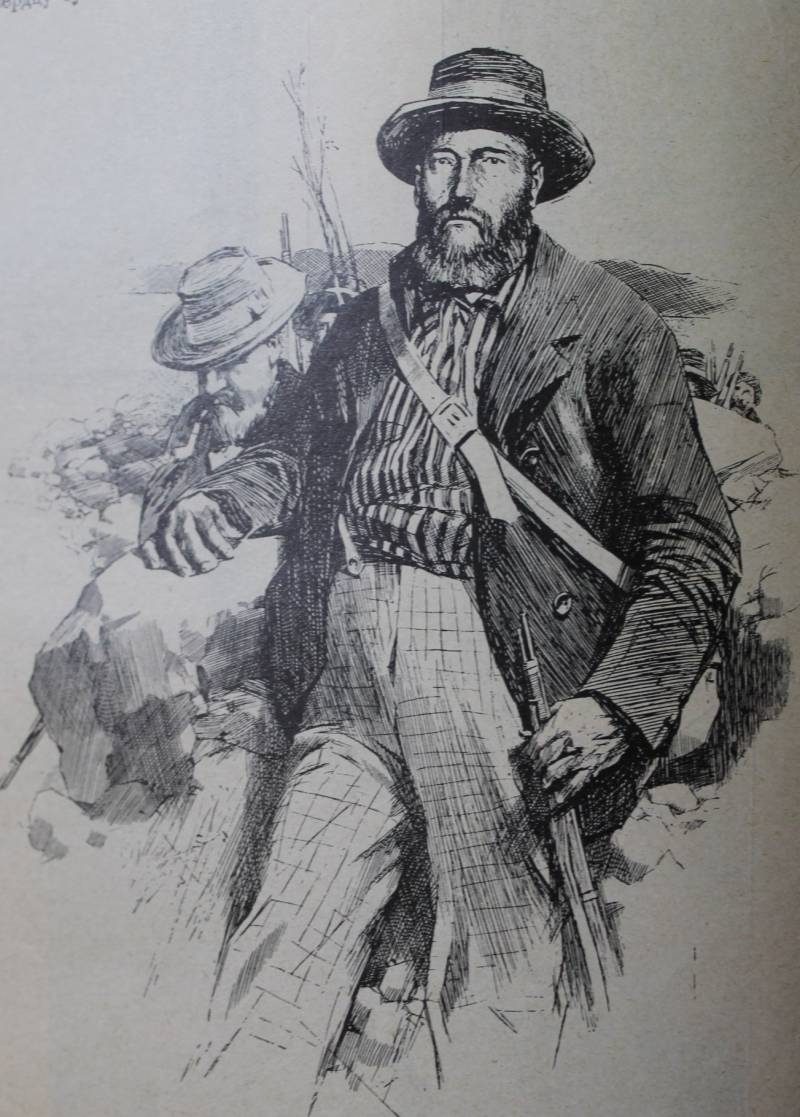 General Cronier is the “evil genius” of his fatherland. Well, French Colonel Willebois-Murray said to him: "The British will surround you." And he said to him: “I was a general, when you hadn’t even learned to ride a horse!” Here God punished him for his conceit! 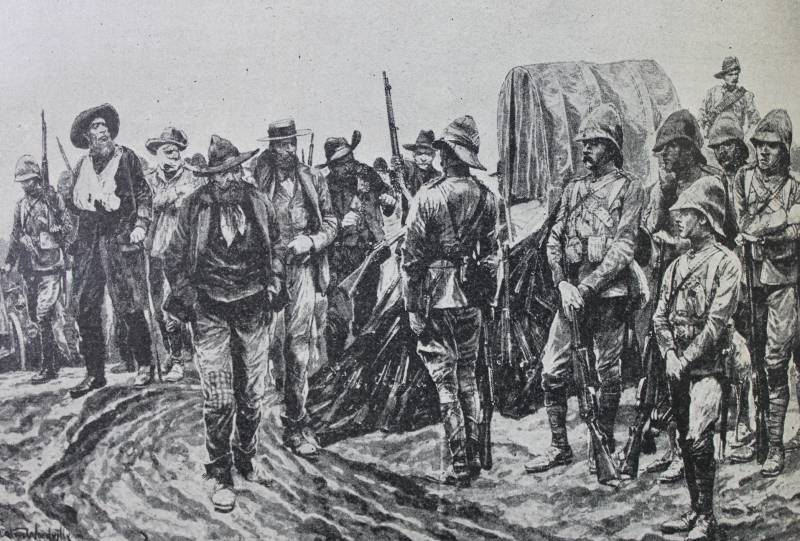 "The troops of General Cronje surrender to the British"

Dum-dum bullets. Everything seems to be understandable, but ... the British shot from Lee-Metford rifles - the shop and the shutter of the system of James Lee, and cutting in the barrel of William Metford. The Lee-Metford rifles had shell bullets and did not turn around when they hit the target. Louis Bussenar writes about the same thing, calling his modern bullets humane. Dum-dum bullets are bullets from old Martini-Henry rifles. In the linear parts of them there were no, but they were part of the Indian sepoys and parts of the colonial volunteers. But, again, as an example of PR, this is excellent information. The experts knew the truth, and the dum-dum was presented to the general public. Moreover, the bullets of the Russian rifle Berdan №2 - also ... "dum-dum". Any cylindrical lead bullet when hit the target unfolds in this way! When the “Berdankas” were taken from the warehouses in World War I, the Germans also raised a hype in the press: “Russians are shooting at forbidden bullets”. That's just at one time such bullets for some reason did not bother anyone. 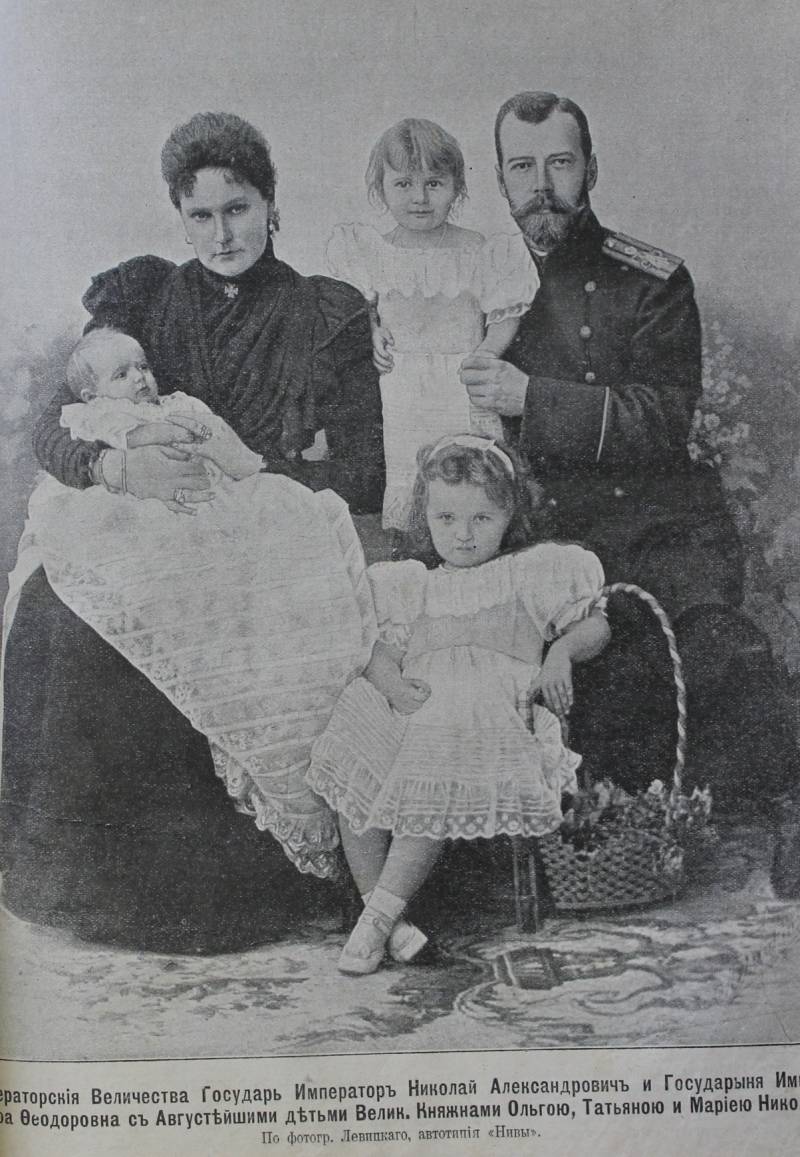 And this is how our royal family looked at the turn of the century. Then it seemed to them that everything would be fine. They did not know their fate ...

Ctrl Enter
Noticed oshЫbku Highlight text and press. Ctrl + Enter
We are
The Anglo-Transvaal War in Photos and PicturesRussian bayonet
18 comments
Information
Dear reader, to leave comments on the publication, you must to register.