October 5 2013
46
Convertible planes are aircraft that are capable of vertical take-off and landing (as helicopters do) and long-term high-speed horizontal flight, typical of conventional aircraft. Since aircraft of this type are not fully neither helicopters nor airplanes, this also affects their appearance. As a result, the configuration of such aircraft can take the most unexpected form. In addition, since aircraft of this type are characterized by two sharply different flight modes, when designing them, one has to constantly make compromises. 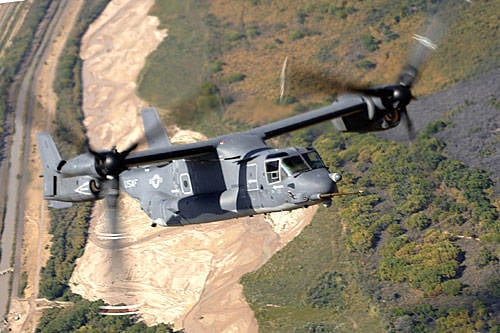 The VTOL aircraft is made according to the high-wing scheme with a straight wing, two-tail plumage, two gas turbine engines and two turning screws in gondolas at the ends of the wing.

A semi-monocoque fuselage with a rectangular cross-section. The length of the fuselage 17.47. The design is completely made of KM (mass of the fuselage 1500kg). The side fairings are used to clean the main landing gear and place additional fuel tanks and air conditioning equipment. In front of the fuselage is a three-seat cockpit, in which armored ejection seats are installed, capable of withstanding bullets hit with 12.7mm caliber and 50g overload in the longitudinal direction and 14.5g - in the vertical direction. On the right side of the fuselage in the front is a two-piece front door; the upper section opens up and into the cabin, while the lower section opens down to the outside and has a built-in ladder. In the 7.37 x 1.53 x 1.3м cab, the 24.3x3 can fit on the seats along the 24 sides of the paratrooper with weapons or 12 wounded on stretchers with accompanying nurses.

The wing is highly located, with a small angle of the backward sweep of the caisson type with two spars and a constant chord equal to 2.54. Almost completely made of graphite-epoxy KM. Top and bottom panels of the monolithic construction. Three-section socks of the wing consoles are made of aluminum alloy with honeycomb filler "Nomex". The wing is mounted on a circular support with a diameter of 2.3м, made of stainless steel and providing the wing rotation along the fuselage when placing VTOL aircraft on the deck of an aircraft carrier. 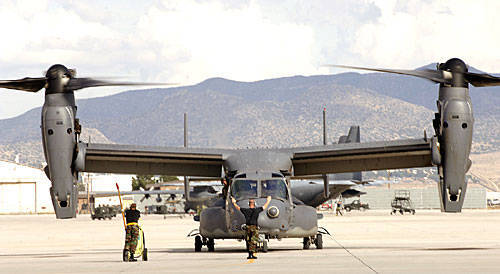 Rotary screws with three trapezoidal blades. The root chord of the blade 0.87, end - 0.56. Twist the blades 45 °. The blades are made of carbon and fiberglass. In the design of the hinge blades are used elastomeric bearings. The screws have braking systems and folding blades. The screws are connected to each other by a synchronizing shaft, laid inside the wing. Rotation of the nacelles is carried out using a hydraulic drive with a screw mechanism.

The two-fin plumage is completely made of graphite-epoxy material. The stabilizer (span 5.61m, area 8.22м2) is mounted above the fuselage tailpiece. The total area of ​​the two vertical keels 12.45m2.

Chassis tricycle, retractable, with twin wheels. Nose support retracts back into the compartment under the front of the fuselage. The main supports are removed in the side fairings. The chassis design is designed for landing with a vertical speed 4.5m / s. The wheels of the main supports have disc carbon brakes. Track chassis 4.62м.

The power plant consists of two Allison T406-AD-400 GTEs installed in pivoting gondolas at the ends of the wing, along with screws. The turbine GTE has a 14-speed axial compressor, an annular combustion chamber, a two-stage gas generator turbine and a two-stage power turbine. Air consumption 16.1kg / s, the degree of pressure increase 14, the specific fuel consumption at the mode of maximum continuous power 0.19kg / hp-h. The engine has a gearbox and a FADEC control system. Engine length (without gear) 1.96m, width - 0.67m, height - 0.86m. Dry weight 440kg engine. 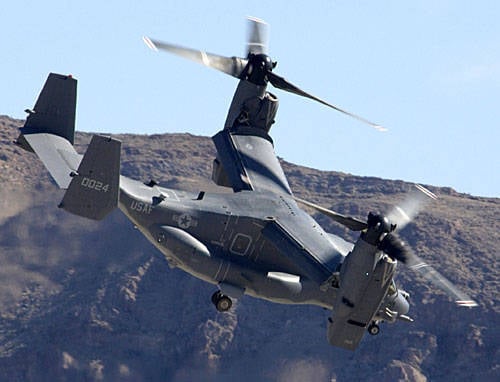 The fuel system has 13 tank compartments with a capacity of 8645. In each side of the fuselage fairing in the front there is one tank compartment; There is an additional tank in the right side fairing. In the caissons of the wing consoles are 10 tanks-compartments: a pair of external tanks serves as a consumable. On the toe of the right wing of the wing there is a fuel filling nozzle under pressure; On the upper surface of each console there is one neck of the gravity filling system. On the side in the lower part of the nose section of the fuselage there is an attachment unit for the refueling rod in flight. For ferry flights in the cargo compartment, it is possible to install two additional fuel tanks with a total mass of fuel 7235kg.

Control system. For control on helicopter modes, control systems of common and cyclic pitch of turn screws are used. In cruising flight, two external elevons are used for transverse control, for longitudinal control a single-section elevator with an area of ​​4.82m2 is used, and for cruise control - rudders on vertical keels. The control surfaces are driven using hydraulic boosters and a three-redundant electrical remote control system.

The wing mechanization consists of four sections of elevons, the outer pair of which is used for transverse control. Area of ​​elevons 4.12m2. The drive of the elevons is carried out with the help of EDSU and hydraulic boosters. 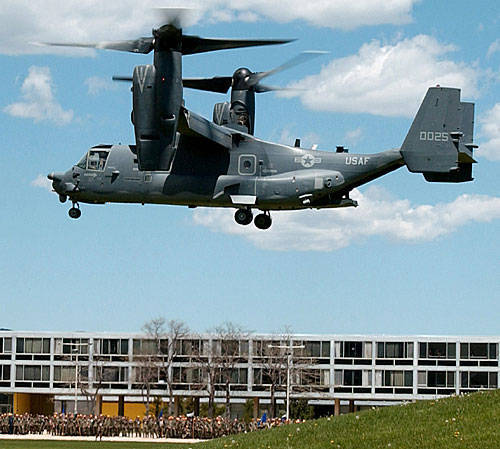 Electronic equipment consists of the TACAN navigation system, VOR / ILS systems, VHF and HF radio communication equipment, the identification system, etc. Information from TACAN, VOR / ILS, radio altimeter, vertical alignment is displayed on four color displays. The cab has a fifth display - to display a map of the area. The AN / ARO-174 radar is used to support flights following the terrain, two AN / AYK-14 computers are installed on the plane to handle the combat mission, the crew is provided with the use of piloting systems at night and night vision goggles; for warning of an air-to-air missile attack there is an AN / AAR-47 system.

Armament depends on the variant of VTOL. There are places for mounting in the cockpit machine gun caliber 7.62 and 12.7mm, and under the nose of the fuselage - turrets with guns. There are also units for the suspension of anti-submarine torpedoes, anti-ship guided missiles and air-to-air missiles.